You don’t need us to tell you that Harry Potter is a juggernaut of a franchise, with ridiculous quantities of content beyond the original beloved book series. There are just so many Harry Potter products out there these days. You could probably spend the rest of your days using only Potter-themed items, and live a comfortable, if somewhat eccentric, lifestyle, as long as you didn’t mind using replica wands for chopsticks.

So surely there are a ton of Harry Potter board games to bring to your gaming table? Since the fantasy franchise has been doing gangbusters for a couple of decades now, quite the collection must have built up? They’re probably pouring in through the windows and flying down the chimney, rattling their lids at us.

But not to worry! We’ve braved forbidden forests, crept through secret chambers, and swum through great lakes (dodging giant squid) to find the best Harry Potter board games of all time. Here are five that the distinguished Potter fan can be proud to add to their collection.

The best Harry Potter board games 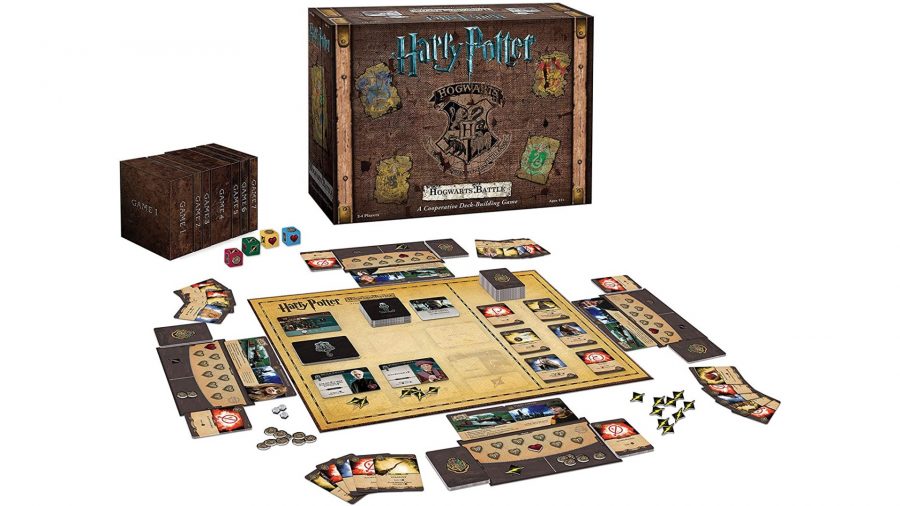 Here at Wargamer, we don’t believe in beating around the bush, so let’s lead with the best Harry Potter board game of them all. Harry Potter: Hogwarts Battle is a cooperative deck-building game for up to four players, where you take on the roles of Harry, Ron, Hermione, and (a slightly shoehorned in) Neville to protect the castle of Hogwarts from evil forces.

Thematic, with good gameplay - the best Harry Potter board game

Each player builds a personalised deck that’s unique to them, and throughout the game, you’ll collect new spells and magical equipment, and team up with lots of familiar faces. Hogwarts Battle takes you through an entire school career, with seven boxes that add new secrets and challenges to the game as you go, gradually ramping up the difficulty. It starts out very easy, so could make for a good first deck-builder game, but it becomes brutally challenging by adventure number seven, so there’s something for everyone.

Harry Potter: Hogwarts Battle has plenty to recommend it, beyond the Harry Potter theme. Its simple but addictive gameplay makes it the definitive Harry Potter board game right now, as far as we’re concerned. Fifty house points to… erm, let’s say Gryffindor! 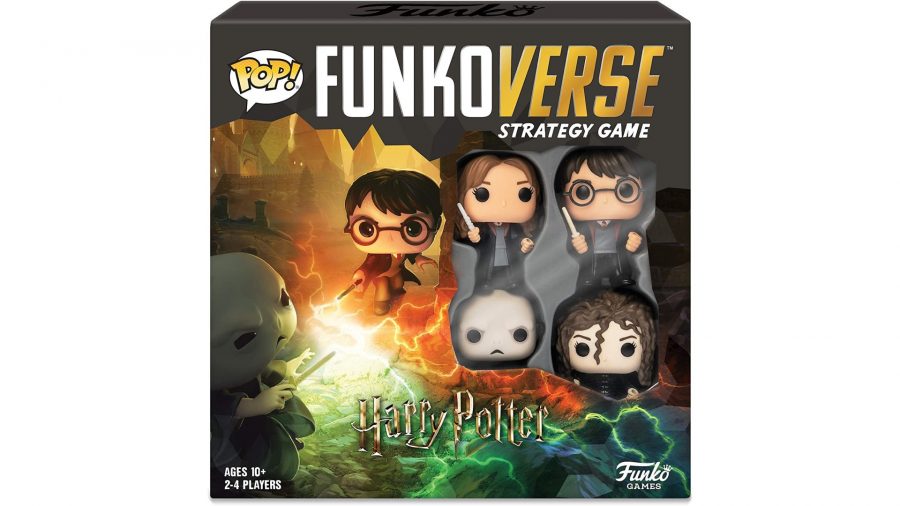 Technically, the Funkoverse strategy game isn’t a dedicated Harry Potter board game. But it can swiftly become one with a pack that lets you play with four Harry Potter Funko Pops, each with their own unique abilities, and two maps, depicting Diagon Alley and the Room of Requirement.

Ring, Ring: The best Lord of the Rings board games

One might expect a Funko Pop board game to be fully focused on the collectible side of things, and the gameplay itself to be throwaway nonsense. Instead, it’s a surprisingly tactical fast-paced skirmish game. And, if you do go full collector and pick up a few different packs, you can make Voldemort fight Captain America, while Harry Potter gets savaged by a Velociraptor. Now that sounds like a good time! 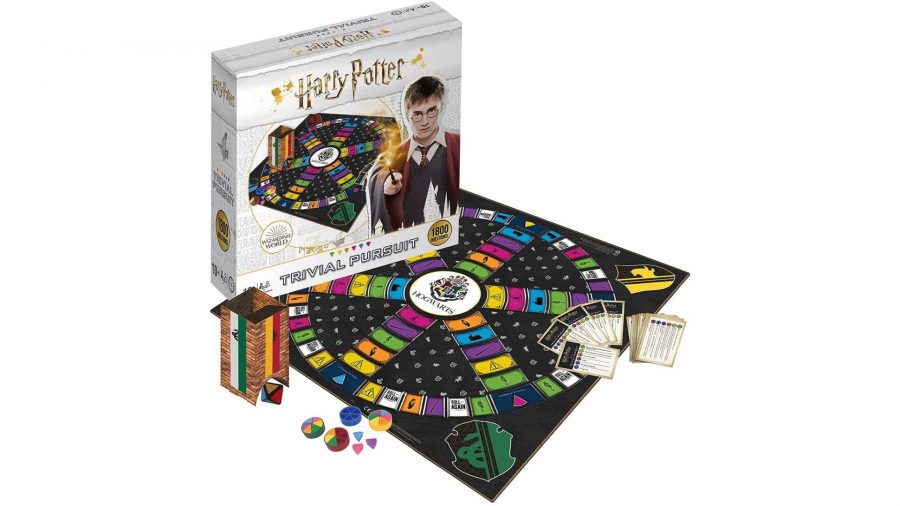 Are you a real die-hard Harry Potter fan? A true Potterhead, who knows their House and their Patronus off by heart? Then let me firstly say “Nerrrd!” and secondly, recommend you try Harry Potter Trivial Pursuit.

Harry Potter Trivial Pursuit is great for fans of the films

A quiz game is a great way to get the grey matter moving, and Trivial Pursuit can be a tremendous source of competitive fun. The questions in this themed version have a good range of content and challenge level, covering every aspect of the Harry Potter stories. They’re entirely based on the films though, sorry, book-lovers.

Be warned, if you’re the sort of person who can name every single minor character present for any given Harry Potter scene, and remember all their birthdays (there’s one in every friend group) you might be a little too good for Harry Potter Trivial Pursuit. Make sure you have an opponent in your vicinity who can give you a run for your money before you pick up the box. Or buy it anyway and give your friends a rinsing, we’re not the boss of you. 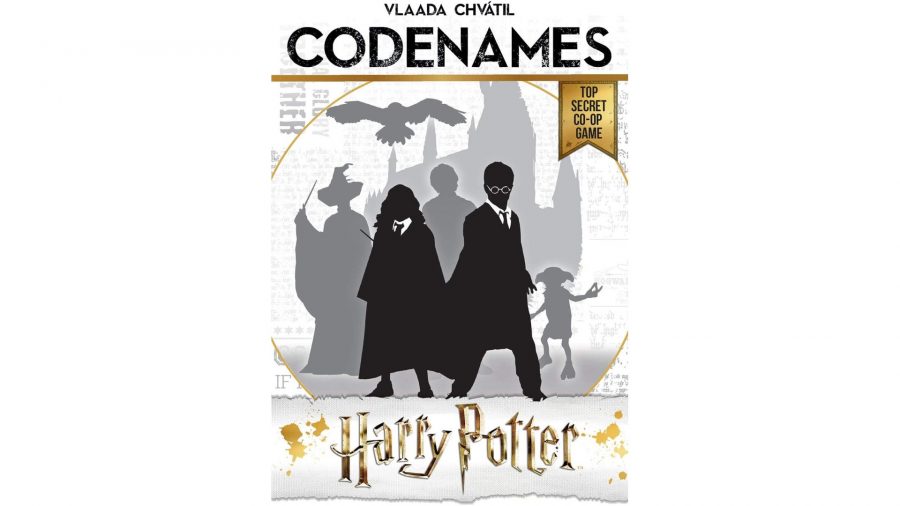 Codenames is a fantastic word association game that’s ingenious in its simplicity. This Harry Potter version is a co-op version of the game that features both words and pictures, as well as missions which add an additional twist. It can be played as a group, but also makes for a brilliant couples’ board game.

A word to the wise, while the previous game on the list could be too easy for some fans, this one may present the opposite problem. You’ll need to at least recognise each of the scenes on the cards (or be extremely creative) to stand a chance. 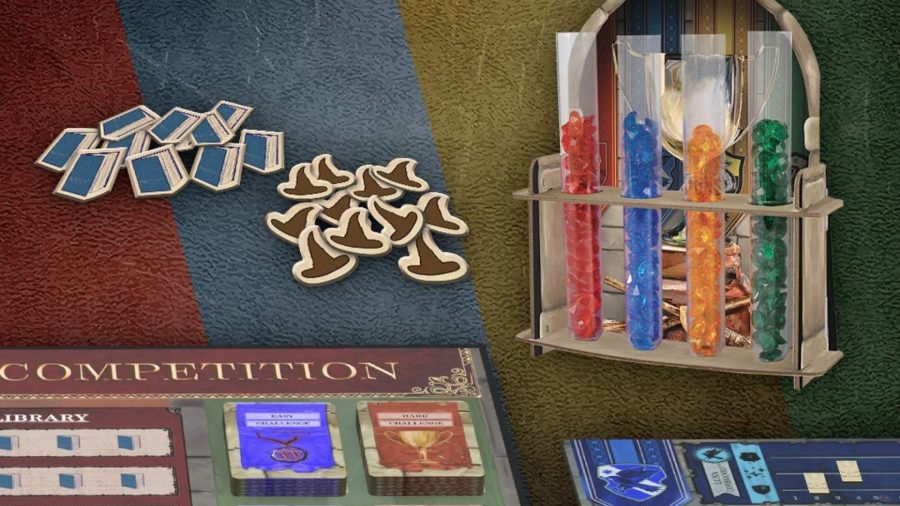 House Cup Competition is a Harry Potter themed strategy board game that’s not overly taxing. It’s a worker placement game where you plop your meeples down around Hogwarts to study in the library, attend lessons in the classroom, and complete challenges to earn house points.

A simple worker placement game that fits its theme nicely

There are no extracurricular magical adventures, sneaking around with Marauder’s maps and invisibility cloaks to be seen, instead you’re required to be a good student and knuckle down to study for your NEWTs. House Cup Competition is presumably a good showcase of what the hundreds of Hogwarts students that weren’t busy saving the world (or being full time bullies) got up to offscreen.

If you’re looking for a light strategy board game with a Harry Potter theme (and you already own Hogwarts Battle) this could be the title for you. We will warn that, aside from the point trackers themselves, a row of test tubes that fill with lovely coloured crystals, it’s not a very pretty game. But if its rather muted tones don’t put you off, knock yourself out!