The second edition of popular WW2 tactical wargame Heroes of Normandie hit Kickstarter today, adding new content and revising rules of the original board game. Heroes of Normandie: Big Red One Edition, which puts two players in control of opposing American and German forces skirmishing in small-scale D-Day combat scenarios, will use the same gameplay system as the original game, and is available on Kickstarter until March 30.

On top of the original game’s content, this new edition adds eight new scenarios, additional units and heroes, and a revised rulebook to balance and streamline play. The game’s components have also been visually redesigned with updated graphics, although capture the same cartoonish style of the original game and publisher Devil Pig’s other board games. The second edition will be compatible with other Devil Pig games that use the same Heroes gameplay system, including 2019’s Heroes of Stalingrad and 2018’s Heroes of Black Reach.

Kickstarter backers can pay Є35 for the game’s core box, which contains a rule book, scenario book, dice, tokens, a slew of cards, and everything else needed to play the full game. Pay Є65 to also receive any stretch goals that might be unlocked during the crowdfunding campaign, or shell out Є110 to get storage boxes for the game’s various tokens and armies on top.

In the run up to the campaign’s launch, publisher Devil Pig Games ran a pre-launch campaign, promising to include more stretch goal content the more people signed up to receive news on the campaign’s launch. From that, The ‘Bloody Omaha’ scenario was unlocked, which includes new terrain tiles, landing craft units, and a special action card for the US forces, Agent Christine Granville. Additional stretch goals are yet to be announced. 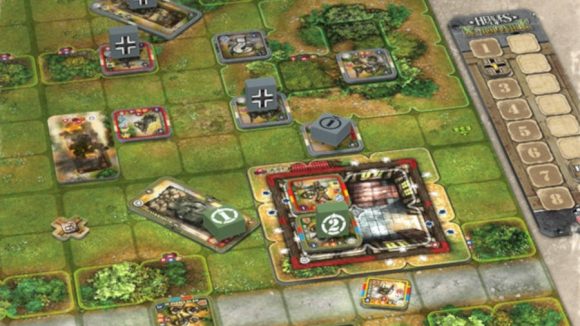 Heroes of Normandie plays fast-paced two-player wargame, inspired by the speed and visuals of classic Hollywood war movies. A self-styled “miniatures game without miniatures”, tiles are used to represent units on a modular gridded terrain board. Games played across pre-determined scenarios, instructing players how terrain should be set, armies composed, the composition of action card decks, and outlining player objectives.

Scenarios are played over a series of rounds that have players secretly give orders to their troops, before taking turns to activate each unit and carry out their commands: moving or firing against targets. ‘Bluff’ orders can also be used to throw your opponent of the scent of your true play. You’ll be navigating terrain, avoiding pernicious Zones of Control, and trying to route enemies from their positions through large-scale assaults. Use powerful action cards to disrupt your enemy’s advance, or bolster your wounded forces and keep them ticking over until the next turn. 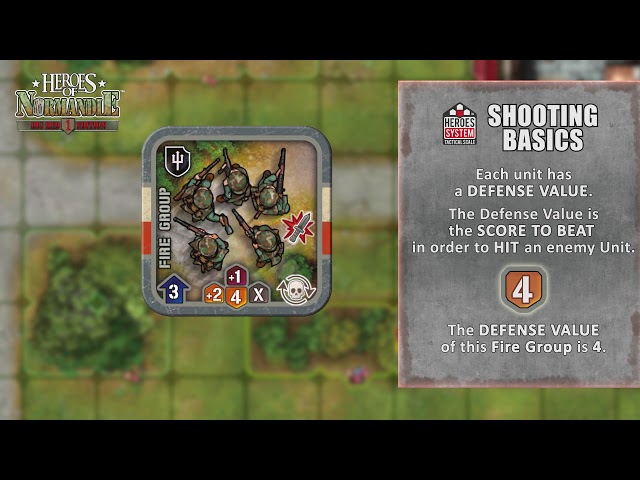 Units span infantry, specialist weapons teams, as well as light and heavy vehicles, and players can create their own scenarios using the modular board tiles.

Read a preview of the rulebook for Heroes of Normandie: Big Red One Edition here.

The original Heroes of Normandie released in 2014 has been praised for its speedy gameplay that dispenses with many of the convoluted rules of other WW2 wargames.

Interested in launching more tactical assaults on the tabletop? Read our guide to the best war board games to find out where to take your strategic mind next.