Imperator: Rome had a rough start. Its release in 2019 didn’t receive the same generous buzz as the other grand-strategy titles in Paradox Interactive’s endlessly growing portfolio, and its reception among players was one of fleeting indifference. For fans not enamoured with the game’s pleasant but stale offerings, even its luxurious setting in antiquity provided little reason to opt for it over Paradox’s other medieval, renaissance, or World War 2 works.

That’s because Imperator: Rome didn’t know what it wanted to be. On the one hand, it sold itself on a strong military system, and encouraged, above all else, persistent territorial conquest, driving you to paint its sprawling map with your empire’s colours. But on the other, its greatest moments of triumph and outright fun came from its simulations of catty domestic political strife. Scared to muscle in on Hearts of Iron’s military focus, but equally reticent to more deeply explore the personal affairs and noble family machinations on which Crusader Kings is built, Rome: Imperator ended as an unhappy medium; a game confused with itself.

Fortunately, the 2.0 Marius update goes some way to rectify that. Not declaring military focus or political strife as the game’s true form, but – better – marrying the two, and showing that Imperator’s initial premise had more legs than even the game itself gave it credit for. Playing through, I found the game’s biggest features were reworked in a way that better mechanically tied my grand national affairs with the internal politics of my nation – better leveraging those elements that were most enjoyable about the game at launch.

By far the most exciting feature of the update is the reworked military system, dramatically altering how wars are fought and the conditions that make persistent conflict feasible. Standing armies, while not erased, no longer constitute the core effort of your military pursuits. Instead, levies must be temporarily raised from within provinces each time you feel it necessary to embark upon territorial conquest, drawing upon your pops (the citizens within your empire, whom you distribute for economic production) to produce troops, which may be dismissed once you no longer have a use for them. 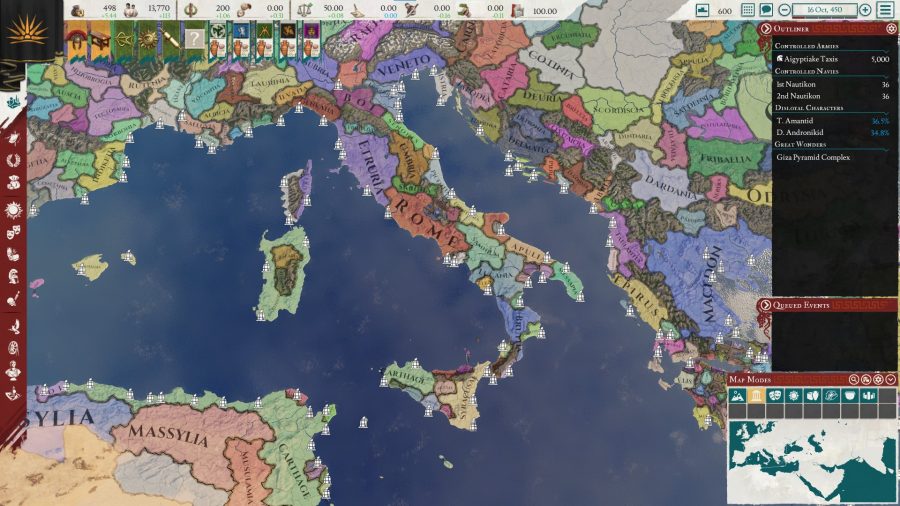 The change is gargantuan. Playing as Egypt, I already had access to one standing army unit – called Legions – and could acquire more as my nation expanded and I unlocked the necessary laws. But even with this existing military presence, campaigns were no longer strictly financed by the current size of my coffers, but rather dictated by the expected hit my economy would take when peeling pops away from their role in economic production to fight in foreign lands.

As you gear up for a military campaign you’ll take an immediate production and income hit when levying troops, and risk losing those pops if your forces are killed in combat. Or, your economy may stall and your resource production stagnate as pops are dragged away from toiling in the fields.

It means more forward-planning, and clearer rewards for optimising your production with the correct nobles, and their attendant bonuses, before embarking on a campaign. With the composition of each levy determined by the make-up of the dominant culture in the province from which it was raised, I found myself forced to pay more heed to the internal composition of my empire back home – ensuring provinces were as well-constructed as possible to support any unexpected levying that might need to be done if my forward march soured. 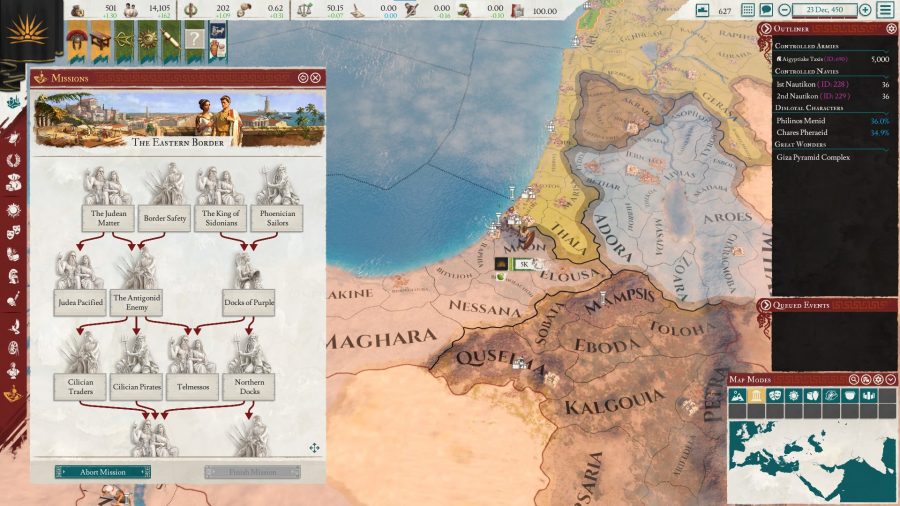 It makes for more serious integration between your internal decisions and foreign affairs. For smaller nations, war can no longer be waged as a constant policy, as your national expansion must be carefully balanced with your long-term domestic growth.

In some respects, the most exciting change to military mechanics is the overhauled Military Traditions. Doubling the number of traditions from seven to 14, and presenting them in neat progress trees, they now provide more scope to your nations’ martial expansion, but, again, require greater handling of your disloyal noble families.

Like before, their availability is dependent upon your nation’s cultural tradition, but requirements have been altered: Egypt, for example, no longer starts with access to the Levantine Maritime Traditions, but must first embrace a Perso-, Graeco-, or Afro-Levantine Influence to unlock the tree, which are themselves unlocked in other Military Traditions progress trees.

These restrictions limit your immediate choice of military direction, serving as a welcome guide-rail in an otherwise unmanageable sea of possibilities. Rather than overwhelming, the additional traditions now provide new possibilities, well-integrated within the previous routes.

Inventions, too, have seen a radical overhaul, and are all the better for it. There’s the familiar breakdown of technologies – martial, civic, religious, oratory – but, rather than selecting from a pool of technological progressions, new inventions are grouped into tech trees, charting your nation’s development. No longer bought with gold, advances are gained through spending ‘innovation points’, generated with each new level to your advisors’ research. 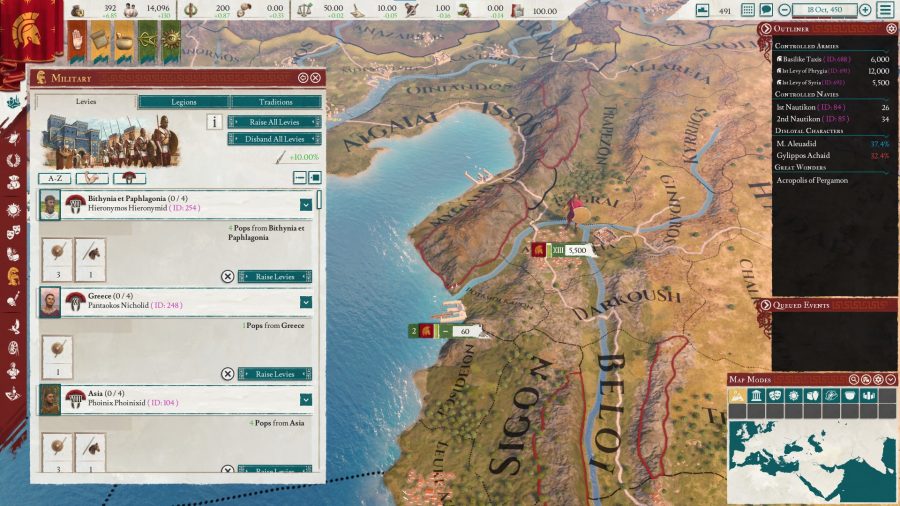 The change sounds minor, but makes for a stark impact on technological development. Rather than haphazardly bungling my way through technology selection whenever I fancied spending gold (or an alert warned me that the intellectual capacity of my nation left a lot to be desired) I found myself more diligently considering the technology choices. With your coffers no longer the driving force of research, it falls to your researchers to progress your technology. Ensure your chosen researchers provide the maximum research bonus possible to advance because, no matter how full your purse, you’ll be unable to progress without them grinding up those levels.

Once again, all this serves to put greater emphasis on managing your pool of noble families. In the midst of a troublesome conflict with Judea, one of my major families had come to feel scorned by my (admittedly discourteous) treatment of them. I was forced to give their eldest son a researcher position, satisfying the minimum number of positions the family expected to hold, but drastically reducing the research bonus of that position.

Before the update, this would have been irritating but ultimately unimportant, because money was the limiting factor of technological expansion. But 2.0’s new emphasis on research progress rather than gold made the cost of nepotism sting all the more. 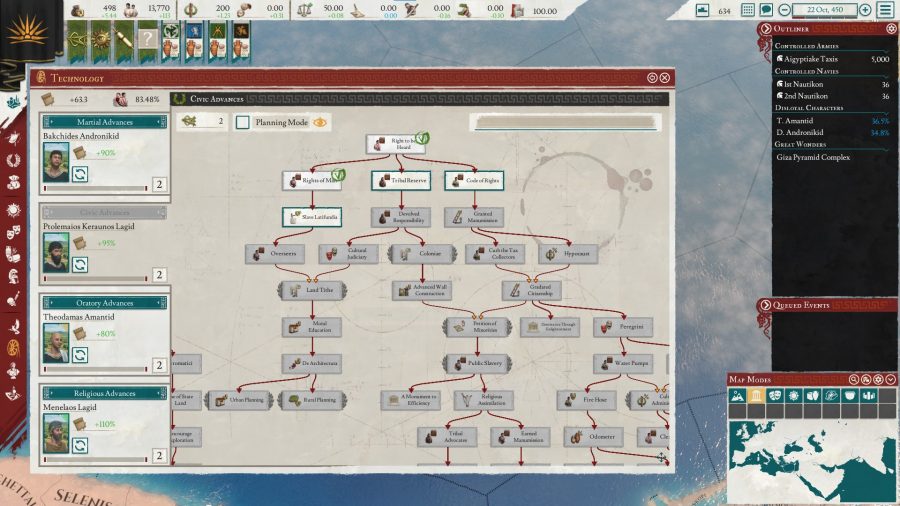 With that greater emphasis on who’s doing the research – rather than simply what research is being done – ultimately influencing the progress of my whole nation, the whole affair felt more exciting than a largely banal hiring process should have. The marriage between the personal strife of my country’s noble families and the national progress of the empire is exactly where Rome: Imperator can excel.

Less romantic, but just as significant, are the user interface changes. Sleeker, more colourful, and making more space for the central gameplay map, the changes feel designed to smooth over what was, before, a clunky and overtly repetitious interface. Quality of life adjustments mean navigation panels present more information, more succinctly, surrounded by thematic artwork.

Armed alterations: Check out the best Hearts of Iron 4 mods

It sounds dry, but the continual panel-searching, combined with dubious prioritisation of information, that Imperator: Rome previously suffered from makes these changes feel like the proverbial breath of fresh air.  Nested tooltips – tooltips within tooltips, as integrated within Crusader Kings 3 – also ensure essential information is easily accessible for any new player lost among the reams of stats, or returning emperors in need of a quick refresh.

It’s no longer an immersion-breaking chore to dig out the details of a pesky noble causing me problems, but is nicely integrated into the general flow of gameplay. 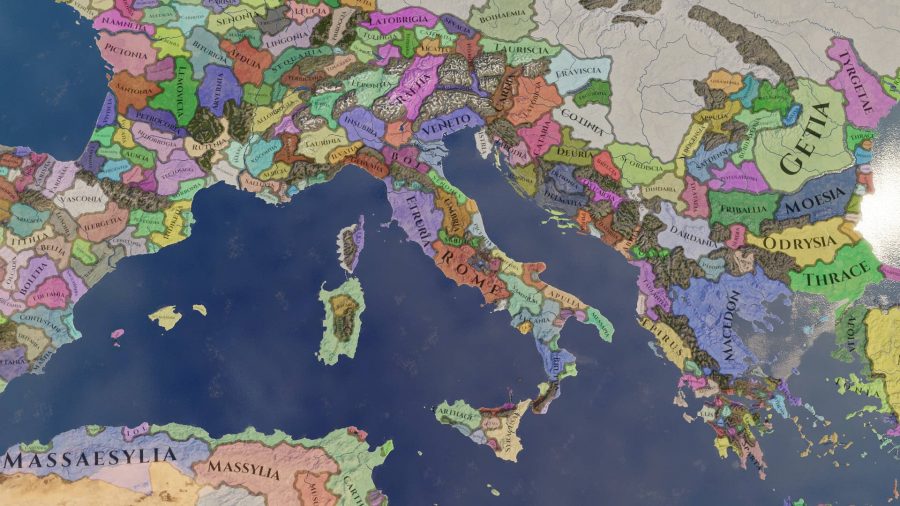 As for the Heirs of Alexander – the latest DLC for the game, launched in accompaniment with the 2.0 Marius update – the expansion feels, par for the course with Paradox expansions, ignorable for all but those particularly in love with playing the specific nations included. In this case, those nations are the Diadochi states – particularly the Antigonid Empire, Seleucid Empire, and Egypt.

Their grandiosity is undeniable, and make for well-tailored linear experiences

New mission trees provide a tailored direction to your conquests, and involve the standard fare of territorial expansion. In many instances, you’ll be doing what any player would do when playing as these nations – muscling into neighbouring territories, and jostling with the other successor states to fill the vacuum left by Alexander the Great’s death. But their grandiosity is undeniable, and makes for well-tailored, linear experiences.

As Egypt, my trek to the Antigonid Empire through Judea and Galilee had me seizing Syria before coming to something of a stalemate as my economy dwindled back home. As I disbanded my levies to regain an economic boost, I wondered if it all might have been easier to take the naval route and secure Mediterranean dominance. 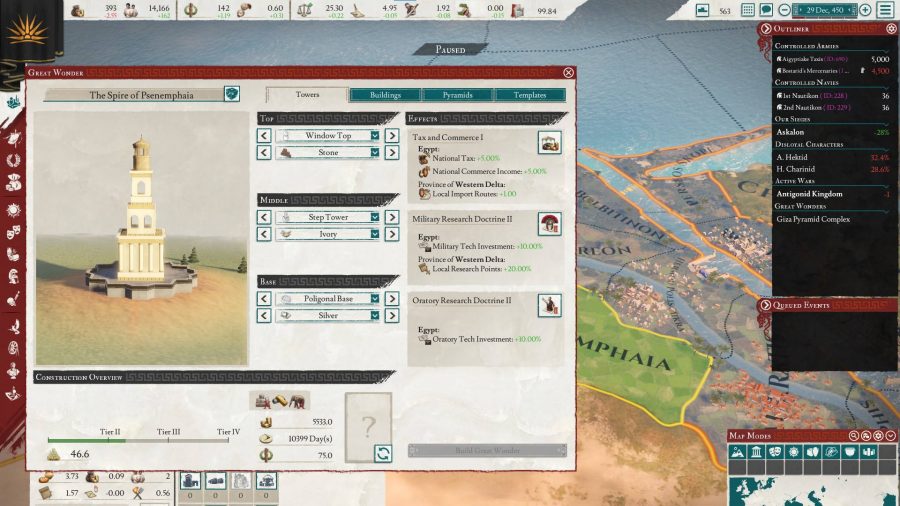 The Great Wonder designer tool adds a neat element of visual customisation – although it’s as superfluous as you might expect. Choosing between temples, towers, and pyramids, and customising the top, middle, and bottom of their structures, the real meat of the wonders comes not from the meagre visual customisation, but from their national bonuses.

Choose ‘effects’ for your wonders to influence domestic factors – from tax rates, to pops output, to technology research rate. But to unlock the very best effects, you’ll need to construct a truly prestigious wonder. Build an unremarkable wooden tower, and you’ll receive minimal prestige, but use more expensive ivory and gold materials, and you’ll be able to unlock more powerful effects.

March of the Eagles: These are the best Napoleonic games

But I remain unconvinced of their worth. Costing thousands of gold pieces and taking multiple years to construct, their cost is certainly befitting of their stature, but they appear a poor investment, providing little return on a humongous cost that could be better spent on settlement buildings. I can only dream of the number of mills and granaries that could be built at the expense of a single lighthouse.

A pretty 3D model on the map is a nice touch and the simple achievement of constructing one of these gargantuan buildings is inherently gratifying. But it is not exciting. 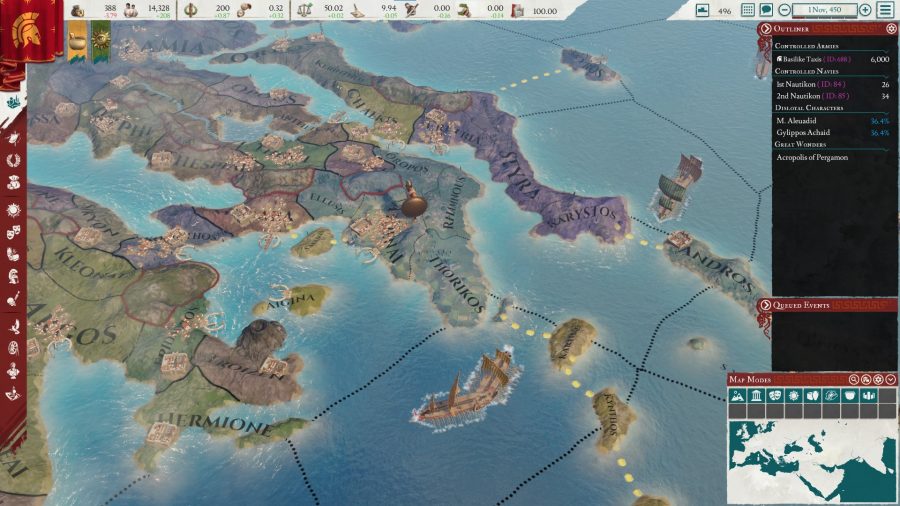 So, Imperator: Rome had a rough start, yes – but it’s surely getting back on its feet. The military overhauls, combined with the changes to research production, cement the game’s focus in the right direction – better mechanically joining military conquest with internal political strife.

These portions of the game no longer feel immutably separate, but rather constantly in flux and contention. The game finally walks the line that it tried to on its first run. If only the 2.0 Marius update had been around two years ago.