France will have her empire! The British have done nothing to support their feeble trade posts in India, spending their time and money bickering with the Prussian courts over alliances and privileges. It wouldn’t help them when the rest of Europe was clamouring for cotton and spices. Money makes the world. Oh? An Austrian princess debuted with a fur shawl? No one wants cotton any more? That will hurt, but we can recover. And who IS this Prussian fellow named Frederick?

And so, my glorious French Empire, built upon a million matchsticks, went up in flames. My wife’s event card, played after I had sunk several turns into winning India, shifted the global market demands back to the New World.

As I had neglected Europe this turn to make my Indian strategy work, I had little recourse against the alliances she had arrayed against me for the forthcoming war. I had gained a region, and lost another. Whether that would win or lose me the game was yet to be determined. Such is the way of Imperial Struggle, the latest release from GMT Games.

This is an ambitious successor to one of the most popular wargames of all time, Twilight Struggle. Instead of wrestling for control over a world in the grips of the Cold War, Imperial Struggle takes place during the long wranglings of Britain and France for colonial domination in the 18th century. 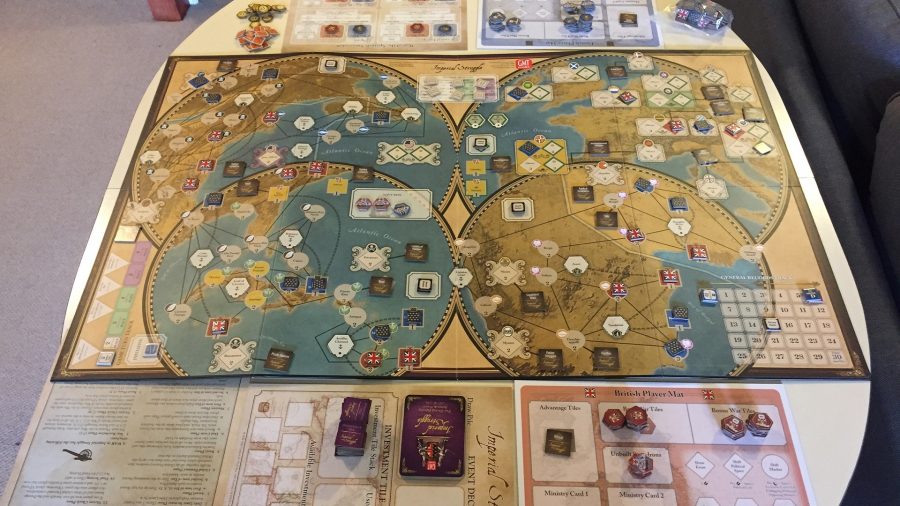 The lineage is clear, but Imperial Struggle sets out to create its own identity, retaining the tension of running an empire eternally stretched too thin across the globe while adding a layer of complexity in the scheduled wars that interrupt the normal flow of the game’s ‘Peace Turns’. This is a heavy game, but one that is well worth investing the time it takes to learn it.

the game relies less on card memory and more on quick, reactive, thinking

The game breaks down into six peace turns interspersed with four ‘War Turns’. During the peace turns, both players acquire event cards, and set up their ministries to best take advantage of those cards and the global situation. Play then proceeds with players alternately selecting investment tiles that offer major and minor action points (Military, Diplomatic, or Economic) and sometimes the opportunity to play an event or upgrade military tiles. These investment tiles, as opposed to the purely card-based actions of Twilight Struggle, are my favourite change.

Now: both players can see, from the beginning of a turn, the potential actions either can take, and can plan accordingly. Of course, these plots won’t survive the machinations of your opponent intact, but the ability to plan around available action points and potential event plays means the game relies less on card knowledge and more on quick, reactive, thinking. It also creates a tension between both players. The empire with less victory points has initiative, so are able to pick their tile first, but their opponent will have the final say. It’s a balanced approach that stops either player from feeling done in by the mechanics while forcing planning a full turn ahead. 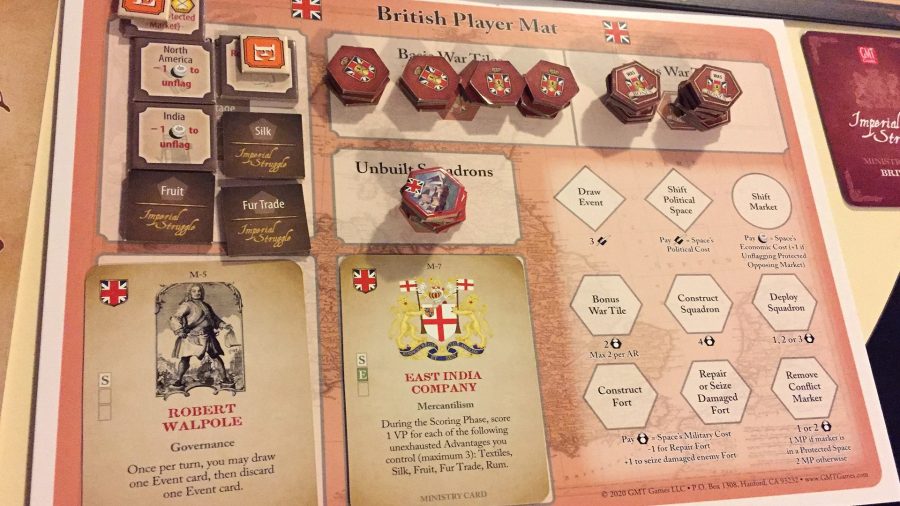 The actions one takes revolve around the placing, removing, and sometimes replacing, of each nation’s control markers on forts, diplomatic and economic spaces. Forts, along with naval squadrons that you can purchase and play with military actions, protect economic spaces and contribute to the frequent wars.

Wars shouldn't be ignored. They add victory points but also have some dramatic long-term ramifications, like territorial conquests that can permanently alter the board state.

More dramatically, the outcomes of some wars can shape future turns, like Scottish victories during the Jacobite Uprisings or the birth of the USA.

Diplomatic spaces contribute to regional control and can also give players access to advantage tiles or extra military strength. Finally, economic spaces confer control over resources and contribute to regional control. Regional control and resource monopolies are the primary source of victory points. The point values, however, change from turn to turn as randomly placed award and resource tokens are turned up. This means that there won’t ever really be a guaranteed path to victory.

War turns break up the action and ensure that both players are always eying the military sideboard as they wheel and deal through peace turns. Basic war tiles, which confer military strength and sometimes special abilities, are hidden from the opponent, but randomly distributed. Improving your military position is both the result of peace turn diplomacy and the spending of military points to improve or add tokens. Points spent on the latter, of course, cannot be spent elsewhere. It adds to the tug of war that constantly sways back and forth in your brain. 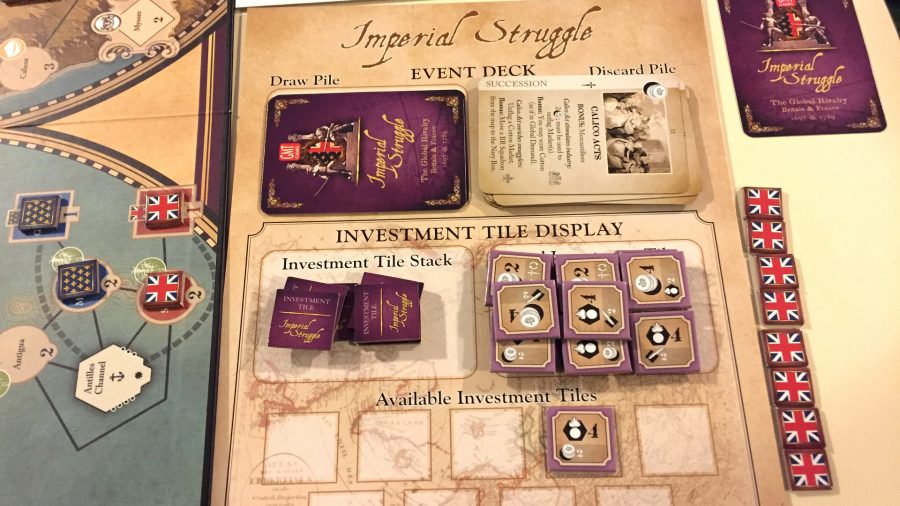 The only downside to a game of this scope and scale, is that it will take one game to really learn how things click. Reading the rules can only take you so far, and the intricate interaction between player actions, event cards, ministries, and the advantage tiles that players acquire throughout need to be experienced to be properly understood.

On top of that Imperial Struggle suffers (to a much, much lesser degree) from the same problem that Twilight Struggle did. Players will need knowledge of the event cards, ministry cards, and especially the ramifications of future wars, all in advance to not be taken unawares when something dramatic happens. This is not really a problem after the first play, but it means that whomever you wish to play this game with is equally invested in learning, or else ready to play a full learning game.

Lions led by donkeys: These are the best WW1 board games

Out of the box, it doesn’t solitaire well; it really requires a commitment from both players. That aside, I think it is an excellent two player game and will most definitely get more play time than Twilight Struggle in this household going forward. The investment tiles, war turns, and ministry card-event card combinations are that much of an improvement.

On theme, Imperial Struggle comes along at a time where board game themes are coming under increasing scrutiny. This is perfectly healthy, and something that game designers, publishers, and journalists shouldn’t shy away from. Imperial Struggle deals with a period in which European empires tried, and mostly succeeded, in subjugating millions of people around the world for their own profit. You, playing Imperial Struggle are aiming to take as much as possible from the world in order to claim victory. 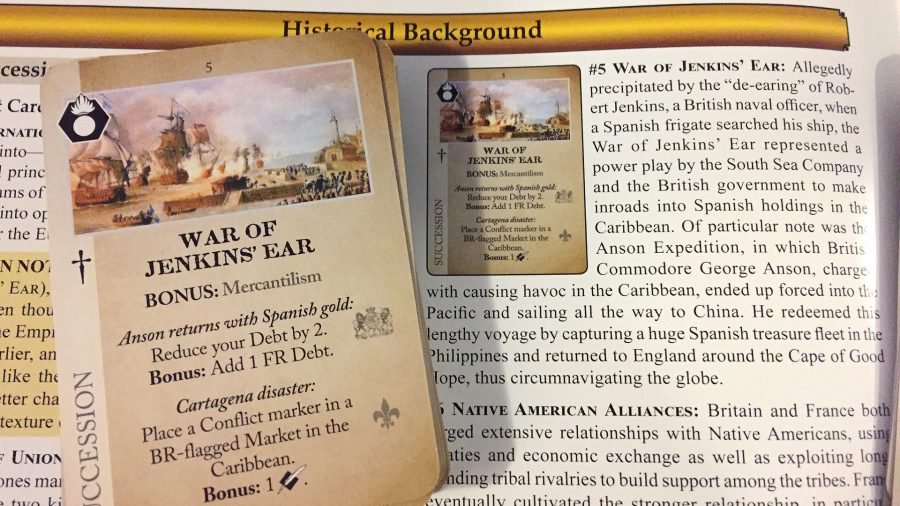 For the record, as a historian and a gamer, I have no problem with games addressing problematic themes or unpleasant conflicts. In fact, I think dealing with these issues in an interactive medium can be beneficial. That is, of course, if they are handled appropriately. Imperial Struggle does reference slavery, the slave trade, slave revolts, revolutions, and conflicts across the territories the game includes through event cards and advantage tokens.

Gaining control of a territory in the Caribbean grants a player a substantial bonus to ship building in the form of ‘slaving contracts.’ That everything is handled purely in their relation to the status and power of France and Britain speaks to the theme of the game. Negotiation with the Iroquois is handled exactly in the same way as negotiation with Spain. In fact, all of Europe is placed on a similar level as the New World and India. All are to be manipulated by France and Britain for their own gain. I feel like this design choice accurately reflects the nature of the conflict portrayed, that is, one between France and Britain focused purely on their own relative positions and power.

That it is an inaccurate and insulting viewpoint to 90% of the globe’s population, Europe included, is perfectly in line with the type of feeling Imperial Struggle evokes. France and Britain treated the world like their own chessboard for most of the 18th century, and Imperial Struggle brings that to life. 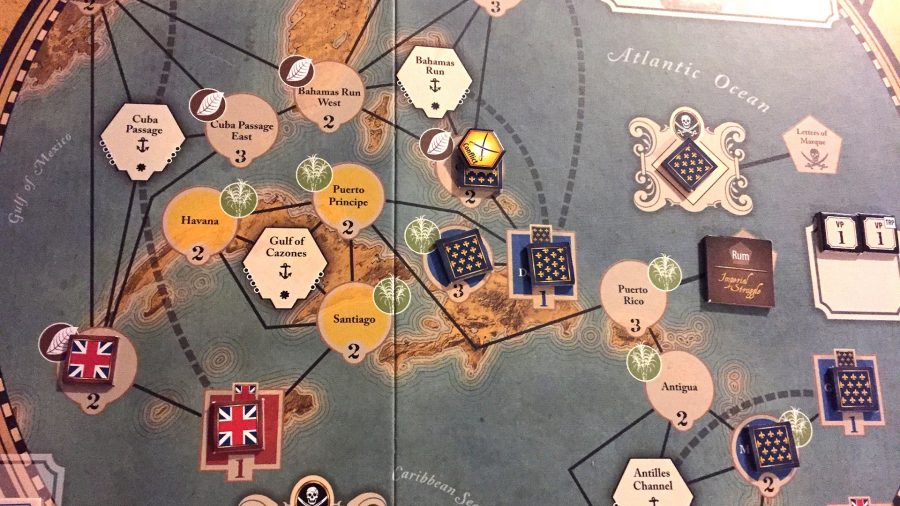 Lastly, a note on components. Everything is top notch. The map is beautiful, the components are solid and easily readable, the player mats are thick and sturdy, and all the information is legible. The cards are excellent quality. I appreciate the inclusion of a playbook that helps get players started with their first game and includes all the historical information that a player could want about cards and war tiles. It’s too bad they couldn’t fit that info on the cards themselves, but it makes sense. Overall, this is a high-quality production. There was only one small error on the map and it is insignificant enough (and correct everywhere else) that it won’t be a problem.

An empire for France: These are the best Napoleonic games

If you like grand strategy games, are a fan of Twilight Struggle and want something deeper; or are looking for something that you and a friend can sink tons of plays into, then Imperial Struggle is a must play. Taking a closer look at the grand selfish struggle of two European Empires as they ravaged the 18th century through the lens of a tight, tense, and satisfying board game is a compelling experience. As a fascinating head-to-head wargame, I think Imperial Struggle will set the bar for quality for a while to come. If you can commit to learning it, it will be worth it.

This review was generously donated to Wargamer by the author.