There’s something undeniably appealing about tabletop wargames like Warhammer 40k and its ilk. They’re about tactical finesse, number crunching, building up a strategy and executing it. They’re equally about the simple feeling of having your guys shoot the other guys, and that moment of triumph when you come out on top.

Tabletop RPGs as we know them came out of wargames. They’ve changed a lot since the days of early Dungeons & Dragons – the hard crunch and numerous tables of the early RPG market have slowly given way to a greater variety of games, with a general trend towards story-based approaches and a segregation of combat from roleplaying. It’s a designer’s headache to make a game that has a satisfying combat system and has room for nonviolent solutions to problems.

So what if we just… didn’t? Kill Sector, free indie game brainchild of Noah Eadie and Tyson John Thatcher II, chucks that problem right out the window, pulls out its vintage action figures, and focuses on an experience where you can hit the other guys in as many varied and imaginative ways as possible.

In that laser-focus, it finds its niche – and it does what it does very well. 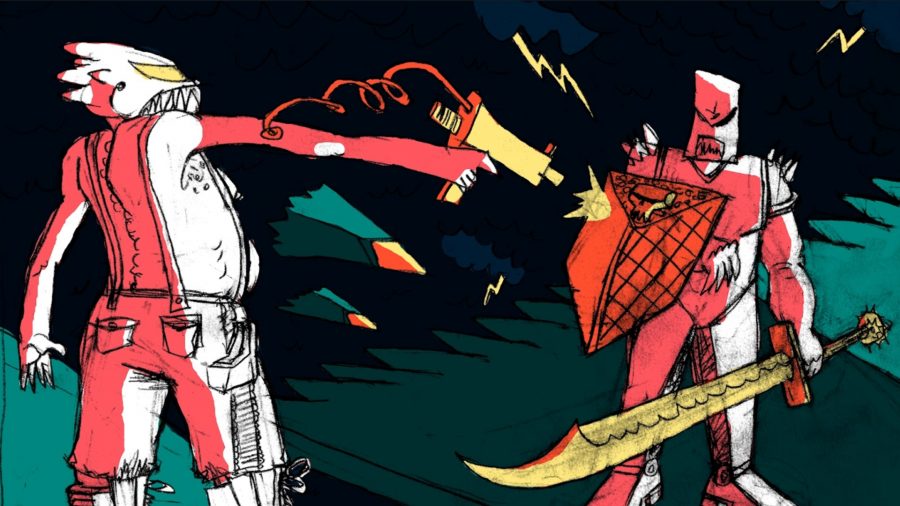 The basics: Kill Sector is a one-shot system. A session is a series of waves of enemies called a Gauntlet; players roll up with fully kitted characters, referred to as ‘Gladiators’, bought with point-buy. Gladiators can be literally anything, from humans to aliens to robots to sentient bowls of pudding – the only requirements are that they can be bought with the allotted character point budget, they can fight, and that they can die.

Backstory is encouraged, but it’s just an excuse to be there in the action

Backstory is encouraged, but ultimately expected to be an excuse to be there in the action first and foremost. Players are given considerable freedom in how to represent their Gladiators, with the rulebook giving freeform advice on how to scrounge up tokens from all kinds of materials for those with limited budgets. To keep it simple and clean, everything operates on a d100, aiming to roll as high as possible, with some variation on the thresholds for success. Critical hits and misses are naturally included, as are ‘Astral’ critical hits and misses, which occur only on a natural roll of 1 or 100. Damage is similarly rolled with a d100, and can be swingy; most of the modifiers for damage involve taking higher or lower dice to make the amounts less swingy rather than rolling more or less dice. 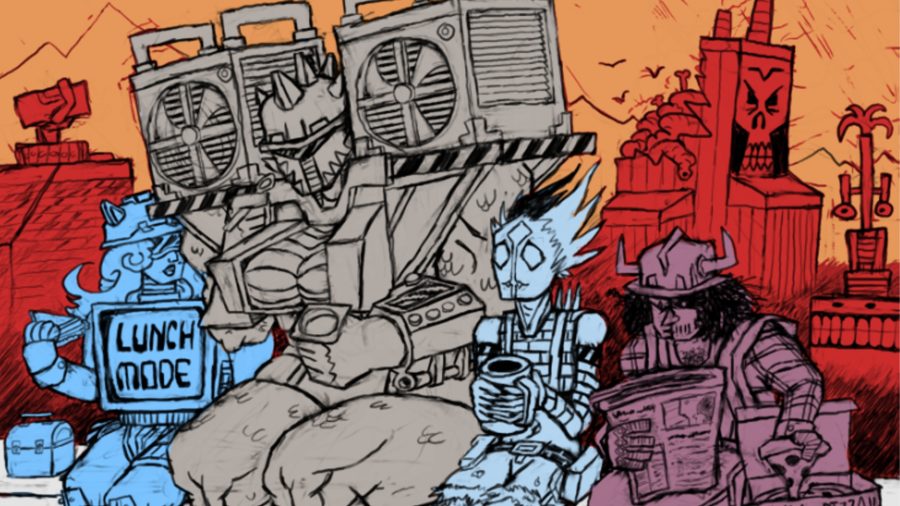 Players and enemies navigate a grid, operate on an action economy that will immediately be familiar to anyone who’s played a d20 game, and use their abilities, or ‘Functions’, to kill and maim their way to victory in a Gauntlet.

Character building: These are the best tabletop RPGs around

Functions are where the fun really starts. The nuts and bolts of a Gladiator, they include a dizzying array of mechanical effects and cover more than half of the rulebook’s two-hundred-and-fifty-odd pages. 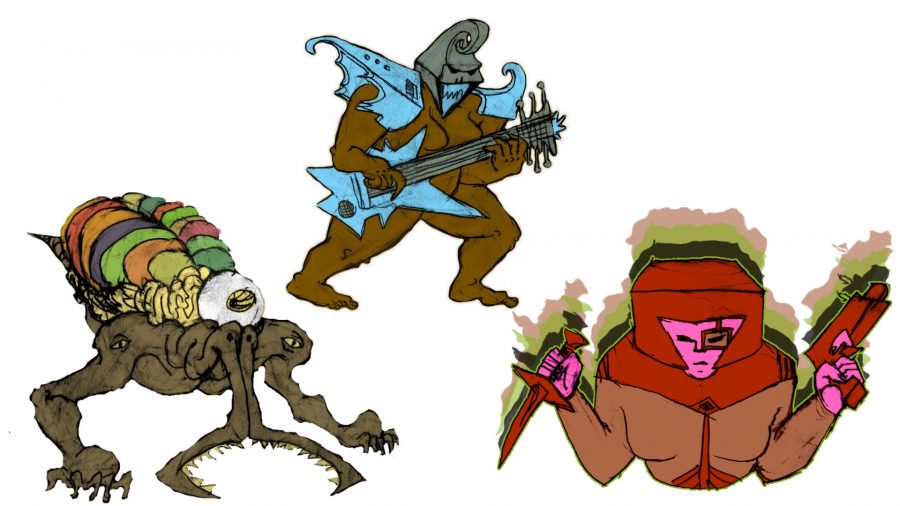 These Functions encompass everything a character is and can do, and range from a gun or an extra appendage to things like reviving automatically on death as an angry flaming skull, having a literal fighter jet, being made of delicious candy that heals your teammates (or enemies) if they take a bite of you, or a function that just “lets you do that thing you saw in a movie one time.” As Eadie notes, “Kill Sector is essentially all about making action figures for your mind.”

The art direction matches the ‘action figure’ design philosophy perfectly. What can only be described as Grunge-Surreal scenes decorate the pages and break up the text, bringing to mind middle-school sketches of imaginative, rule-of-cool battle-scenes, but drawn with a subtly refined hand that makes the most bizarre and disturbing renderings into eye candy. It’s no surprise, then, to find Rifts and Wasteworld as Eadie’s chief inspirations here.

The book is well laid out, indexed, and includes a lot of rules that can be used or discarded as need be, giving GMs and players a helpful touchpoint for building around mechanics, while also instituting the ever popular soft rule of making something up and sticking with it, if looking up an actual rule is taking too long. There is no printed character sheet, only guidelines for building one – which could cut either way, depending on the group’s preferences. 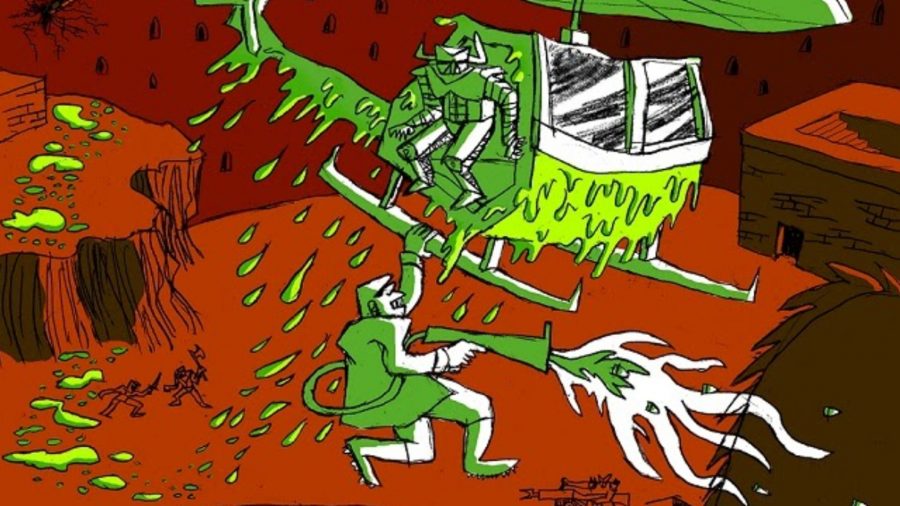 In my experience, the cumulative effect of all of these nuts and bolts is that the game plays like a hybrid of a wargame and a traditional tabletop game. Characters fight almost exclusively, but their actions do usually end up contributing to a narrative within the combat, even if that narrative is something absurdist or silly.

In this way, the combat acts a vehicle for the narrative, the part where things happen, instead of getting in the way. This makes Kill Sector a unique experience for roleplayers who don’t mind getting absurd, while still retaining the appeal for the crunch-lovers at the table. However, if you outright hate combat, Kill Sector will still not be for you. 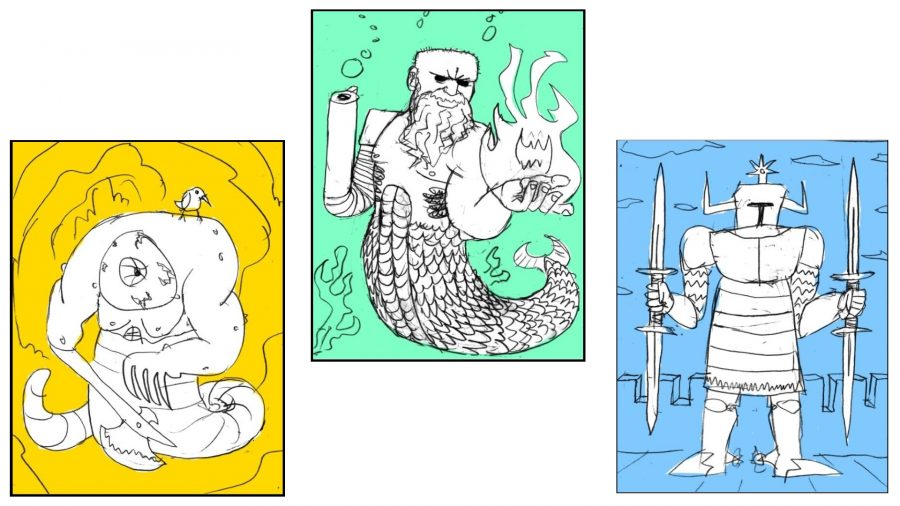 Speaking of crunch, characters don’t advance, so building characters is closer to building an army with CP than rolling up a traditional sheet – which can be great fun in and of itself.

“Mastering a combat system or creating the perfect customization set-up puts me into a relaxing flow-state,” says Thatcher, and his intent shines through in the process. A sense of progression for players in Kill Sector comes less from gaining new abilities, and more from fiddling with builds, mastering new ways to use them to cut a swathe through one’s enemies. The fun of customisation doesn’t stop at the book, though. Taking inspiration from the prolific Doom modding community (“the core impetus for Kill Sector”, according to the creators), the game is extremely mod-friendly, with a whole page of the book dedicated to a non-profit open license to modify the rules. 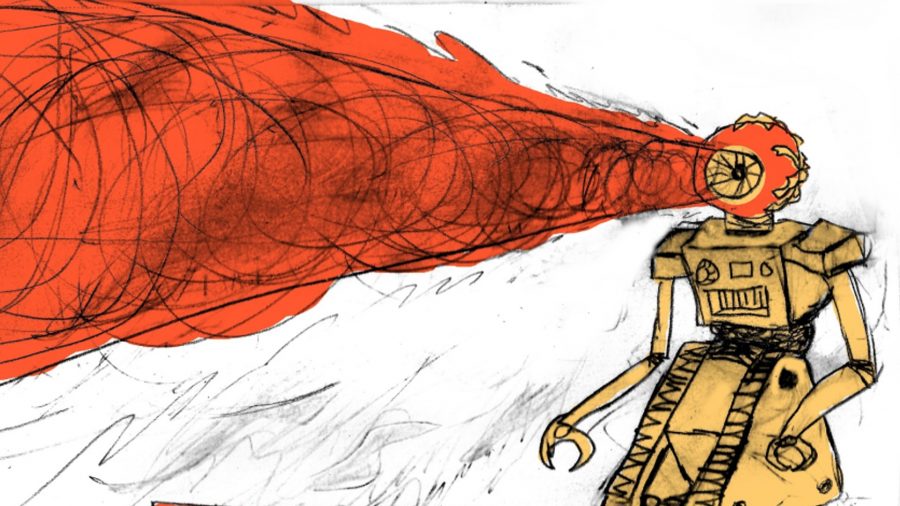 When players make characters, Eadie says, “in the process they end up making a personal arsenal of new characters, enemies, gauntlets, and functions,” which they’ll then carry forward and share, “either by bringing them to their next gauntlet or posting them somewhere”.

Rules and representation: Designing for disability in TTRPGs

“People then get inspired by that to make their own new stuff – perhaps using some of what they just saw as a base – and it perpetuates this whole cycle of mutual inspiration and collaboration,” they add. 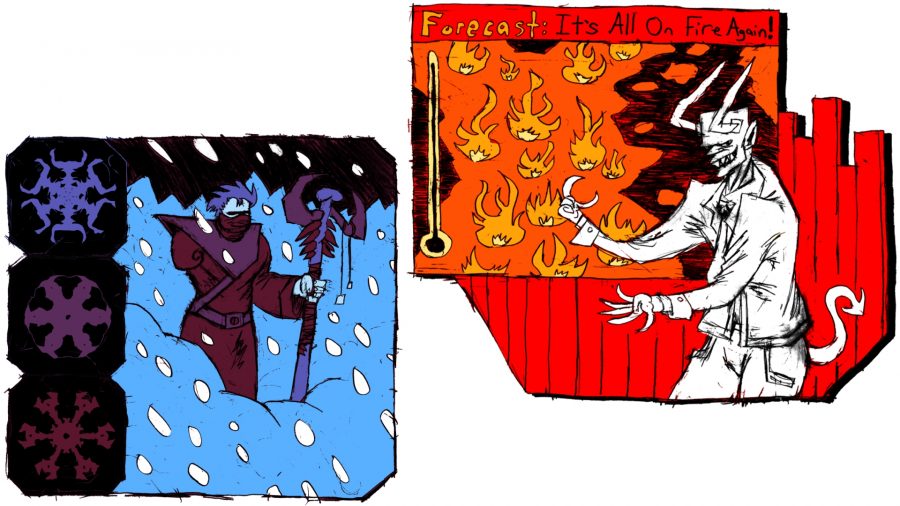 “For years now, whenever Tyson or I see something cool, we’ve had this instinct to make a new function to describe it, and it’s super cool seeing other people develop that knack.”

“Kill Sector is an ever expanding and ever evolving universe,” Thatcher adds. “I’m happy to be at the helm of something that brings people joy while continuing to grow. There is always something new to see.”

Kill Sector is available through DriveThruRPG, along with a recent expansion about construction contractors doing dangerous jobs in esoteric and dangerous locales. 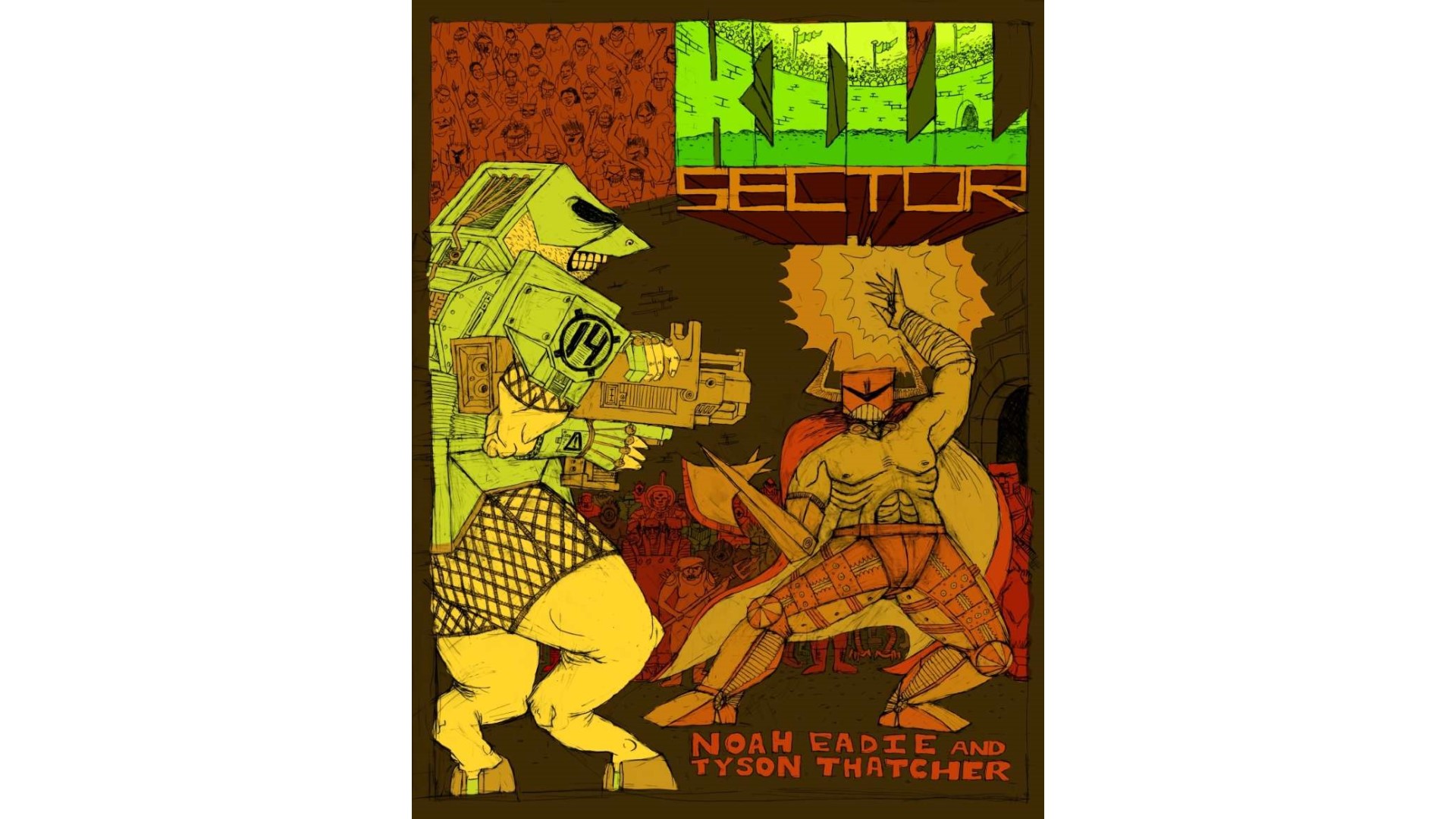