If game genres had their own high school-style awards ceremonies, there would be little mystery behind who’d get each one. ‘Most Handsome’ gets called out, and up swaggers the latest dazzling triple-A FPS or action-adventure, its hair impeccable, its dad’s tux squeezed over football-player shoulders. ‘Most likely to succeed’ would inevitably go to that fast-talking free-to-play live service game that knows everyone’s data, with a player-monetising business plan so slick it doesn’t need to go to college.

And, if there were an award for ‘best storyteller’, well, then every head would turn to RPG – the editor of the school paper, probably – with its high-waisted jeans, nerdy t-shirt, corduroy jacket, and an ill-considered fedora. The smug, smirking, opinionated bastard who wins it pretty much every damn year. And what part do tabletop wargames play in this increasingly over-stretched analogy? That’s right, the grumpy knot of dateless wonders from the history and sci-fi clubs, sat at a corner table, cursing their overlooked status, and squabbling about T’au gunlines, or Mussolini, or whatever.

Well, I have a serious problem with that (and I don’t just mean because I’m a 28-year-old Brit, and that entire, shonky high school cliques bit was clumsily reverse-engineered from the American popular culture I’ve had ‘exported’ down my throat, foie gras goose-style, all my life).

I’m a self-described narrative-first gamer – story comes above all other considerations for me – and I’ve devoured RPGs ever since I could get my hands on them, joyfully frittering away (at a conservative estimate) half my youth on Diablo II, The Elder Scrolls, Baldur’s Gate, Dragon Age, Neverwinter Nights, Fallout, Mass Effect, and countless other, less remarkable titles. I happily poured thousands of irreplaceable life-hours into those games because the overall worlds they created, and the sweeping stories they told, captured my imagination like no shooty-bang-bang videogame thriller ever could.

But even the luxurious, sweeping escapism in these indispensable RPG videogames falls tragically, inescapably short – and perhaps always will – compared with the overwhelming narrative return on investment offered by tabletop wargames. It’s all to do with the consistency with which these games can generate that most sought-after of gaming experiences: an organic, unscripted, and utterly true-feeling story ‘moment’ – a seemingly unique confluence of in-game events that’s at once gripping, authentic and memorable.

In videogames, teams of hundreds labour for thousands of hours, under sometimes inexcusable working conditions, trying to build the complex, overlaid simulations required, first, to ensure that such ‘moments’ manifest themselves, and, second, to hoodwink the player into believing these are, truly, spontaneous memories in the making. It’s a very costly business convincing you that your favourite organic gaming experiences are, in fact, the real McCoy – and not Total Recall-style memory implants, pre-planned by developers. 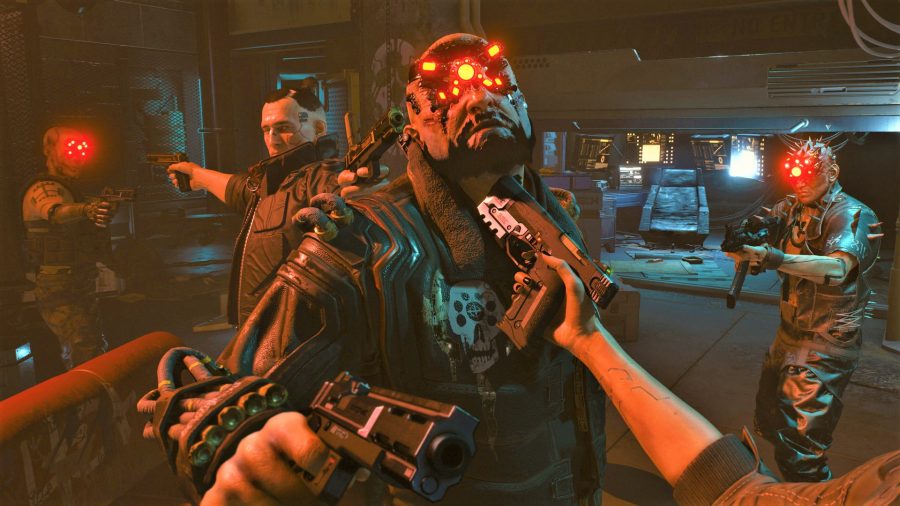 As the debacle that was Cyberpunk 2077’s launch so elegantly demonstrated, the systems that combine to pull off this immersion-weaving con trick can, even nowadays, collapse entirely if they have a few weak links in the wrong places.

But even in the most robust examples – your Witchers 3s, your Red Dead Redemption 2s, even your Disco Elysiums (Disco Elysia?) – the hit rate for achieving those magical moments is, inevitably, limited.

And other stories: These are the best tabletop RPGs

Computer games that pre-program the narrative possibilities open to the player (even via ever more sophisticated branching and dynamic structures) have to work incredibly hard to create the illusion of spontaneous, meaningful storytelling beats, which you’ll experience just a few times in your 100+ hours with the game.

In tabletop wargames – and, for my personal experience, I speak here mainly of Warhammer 40K’s sci-fi miniature battles – these moments crop up in almost every single 2-4-hour game I play. And they’re often better, too. 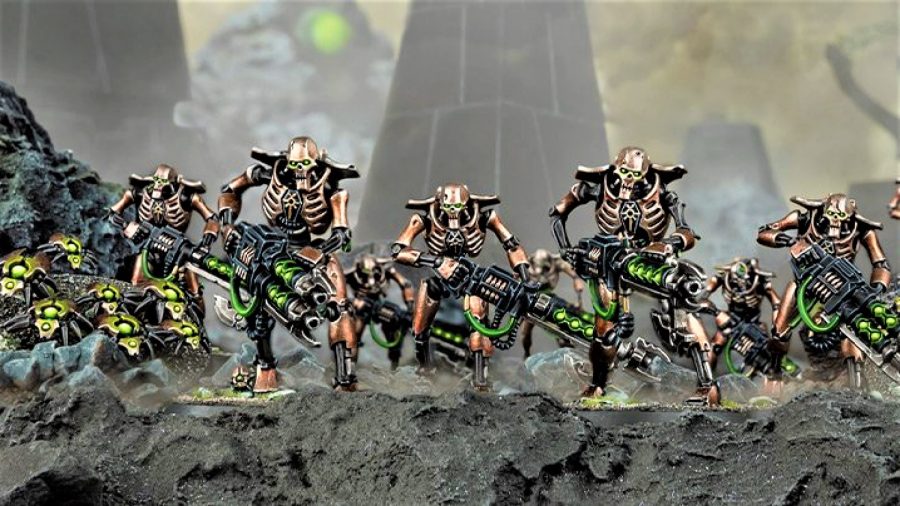 Let me explain. Last time I was able to play a real, live game of Warhammer 40K, it was a bloodbath. A ragged alliance of convenience between my robotic Necrons and my pal’s bestial Orks clashed with the superior numbers and ranged firepower of the Adeptus Mechanicus. At around the halfway point, a blood-soaked moshpit in the mid-board contained the permanently short-circuited corpses of most of my troops, and my green-skinned comrades weren’t faring much better in casualty terms.

In the jaws of defeat, tabletop geometry offered us one last hail-mary

But, unlike the cowardly cyborgs opposite, we had ventured out across the board to claim strategic areas, gaining points for completing preset objectives, such that, despite our pyrrhic losses, a victory was still up for grabs. In the final turn, though, watching our AdMech opponent steal a narrow points lead, we surveyed our disparate remaining forces and came to terms with impending defeat – until, in one sudden, shining moment, it appeared: one last, million-to-one chance to win the day.

Even in the jaws of our enemy’s overwhelming, board-covering force, the near-infinite probabilistic peculiarities of tabletop geometry had provided a hair-thin, tightrope path to victory – a corridor through enemy lines which, with a lot of luck, my teammate’s last Ork vehicle could punch through to eliminate one of the AdMech officers for one final, game-winning burst of victory points. 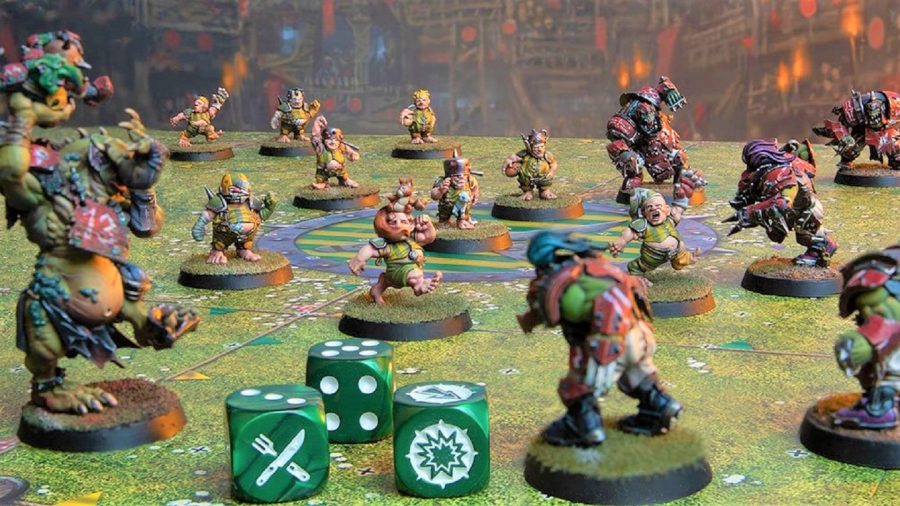 It was the kind of in-the-moment, knuckle-whitening denouement of vicarious thrills that I suspect sports fans get from watching their team’s star player race desperately, in extra time, to achieve that last home-goal, field-down or touch-basket (I do not watch sports, but I understand the emotions involved).

Our plucky little armoured car made its move just right, took out an obstructing enemy with shooting, and was ready for its big break. It came down to a single dice roll – we had one chance to successfully charge that enemy character and snag the win. Ten or more required on a roll of two dice… 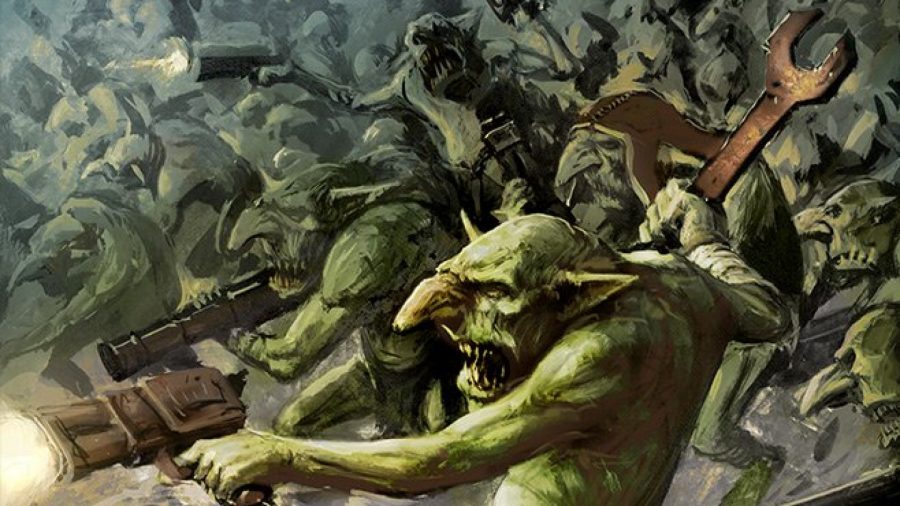 I’ll leave the story there, as what came after that really isn’t relevant, and has, in any case, been expunged from all records as the lies and heresy that it was.

Wargames’ peculiar intensity may make for salty players, but brews unique stories too

The point is that wargames, far from showreels of pre-scripted story beats, are the living, cumulative interactions of bogglingly diverse player choices, their results kept unpredictable by the capricious whims of the dice gods, and their intensity heightened by the high-risk, high-reward nature of investing hours into a single battle that you could lose (hard) due to just a couple of poor choices or bum rolls.

That veritable molotov cocktail of gaming psychology is what can make wargamers such salty (and/or smugly competitive) individuals. But it’s also what guarantees a game like Warhammer, or Bolt Action, or Flames of War, or Black Powder, or Pike & Shotte, or SPQR, or any one of a thousand titles evoking a million battles, will consistently create gripping, convincing, and constantly evolving stories from start to finish, imprinting those narrative highlights in your mind with the staying power of a DEFCON-one-level superglue spill. 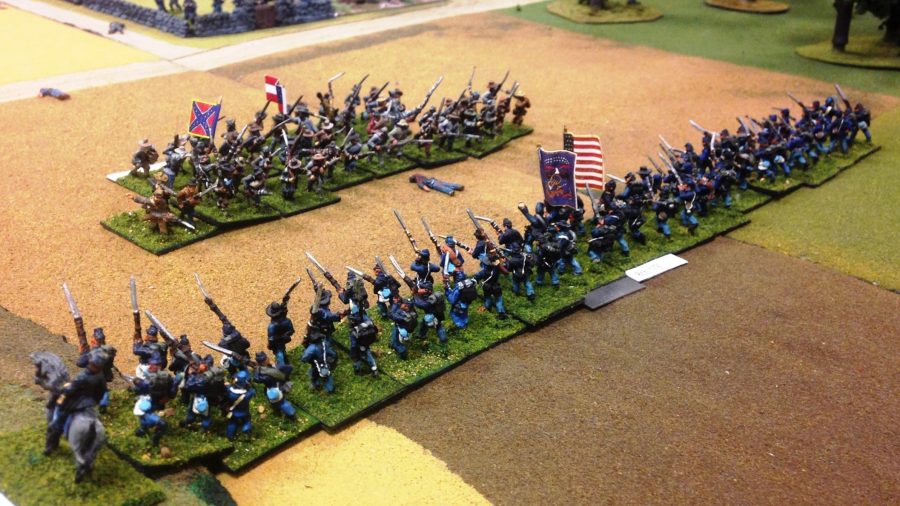 Compare that to finding out that one merchant you rescued in that one sidequest now lives in the next city, selling fish, and he recognises you – or to that moment of thinking to yourself “huh, neat”, when you meet an NPC and realise you already smushed the bandit they’re hiring you to kill – and you’ll begin to get the idea.

So, if you want to envelop yourself in a vast, velvety-smooth fictional carpet of world-built loveliness, then sure, boot up a Witcher, or an Elder Scrolls, hell, even an Assassin’s Creed, these days. They’re so complex now that you can count on a magic moment or two every couple of sessions, easy.

But if you want to experience a real-feeling story, with real stakes, twists, turns, glistening instants of concentrated triumph, and unpredictable emotional gut-punches every single time – play a tabletop wargame. You’ll see they deserve that high school senior-year freshman homecoming sophomore award at least as much as RPGs ever did.