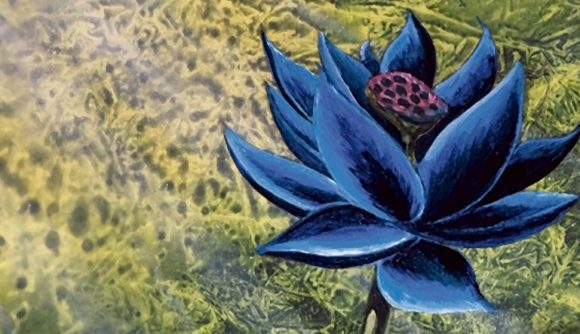 Magic: The Gathering’s most prized, and infamous card is making an (indirect) appearance in the trading card game’s next set. Carrying a strong nostalgic theme, Modern Horizons 2 references many older MTG cards, and includes several throwbacks to past sets, Legendary Creatures, and Planewalkers. But the latest Commander to be revealed reintroduces the most legendary card of them all: Black Lotus.

Previewed on the official MTG blog yesterday, Garth One-Eye is a five-colour, 5/5 Human Wizard that can be tapped to cast one of six cards: Disenchant, Braingeyser, Terror, Shivan Dragon, Regrowth, and, the star of the show, Black Lotus. The cards were originally printed in MTG’s Alpha set (the game’s first core set), and range from creatures, instants, artefacts, and sorcery cards.

However, Black Lotus stands out for the mythos that surrounds it. An Artifact that requires no mana to play, and adds three mana of any colour to your pool, it’s been a favourite among MTG fans for years, and is especially prized for allowing you to cast powerful spells rapidly. It’s also become the most expensive MTG card ever sold at auction, fetching a whopping $511,100 / £360,658 on eBay earlier this year.

But you won’t be able to cast the infamous flower turn after turn. Per the card’s description, you can only use Garth to cast each of the six cards once, although Flickering the card into exile, before returning it to the battlefield, could get around this limitation. 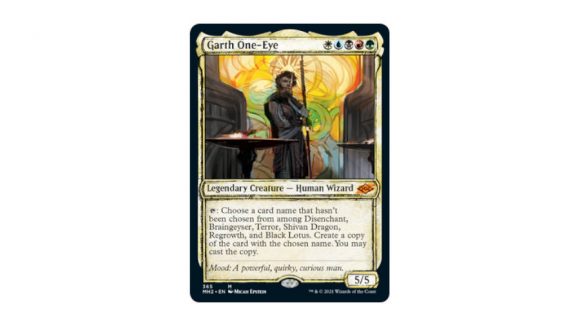 Writing in the blog post, MTG designer Ethan Fleischer said Garth One-Eye was designed to reference the spells of the game’s early fiction, and his six abilities chosen for “fun gameplay”. The variety of cards was intended to keep his abilities applicable across a match, and make him something of a ‘toolbox’ Commander, who has an ability for every situation.

Moreover, Garth One-Eye is a fitting character for Modern Horizons 2’s nostalgic focus. The protagonist of Arena, the first MTG novel, follows the secretive planeswalker as he wanders from place to place, stirring trouble, and attempts to bring down four noble houses. Fleischer said he wanted to draw on this lore when designing Garth’s abilities, and mana colours. 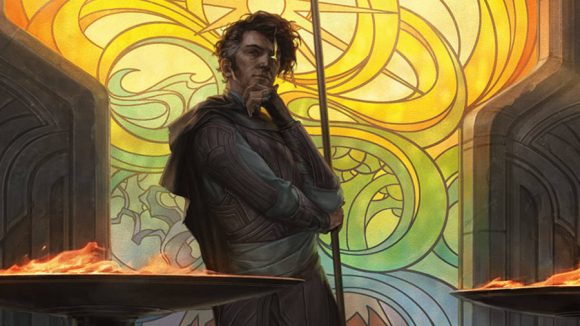 Want to prepare for the release of Modern Horizons 2? Read our guide to building an MTG Commander deck, so you’re reading to go when the new set launches.