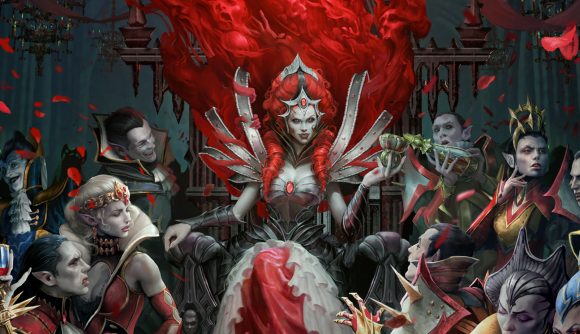 Card spoilers for Magic: The Gathering’s next set release, Innistrad: Double Feature, have surprised many fans of the trading card game. Fully revealed yesterday, the upcoming compilation set will contain nearly every card from MTG’s two most recent sets, reprinting them with identical art and text but in a greyscale colour scheme.

A compilation set that will combine cards from Innistrad: Midnight Hunt and Innistrad: Crimson Vow into a single release exclusively designed for drafting, the scale of the set differs from many fans’ expectations. Although Double Feature had originally been billed to contain “select cards” from the two sets, it will, in fact, include all of their cards minus their basic lands.

Similarly, while the cards in Double Feature were previously described as possessing an “eye-catching black-and-white treatment, echoing beloved horror films of the past”, the final greyscale filter has left some players disappointed by the set’s artwork, which seems to lean very lightly on its monster movie theme.

While the idea that lots of cards will be included in the set might sound appealing, sheer quantity isn’t directly compatible with Double Feature’s draft-focused design. Drafting in MTG – in which players take turns selecting cards from booster packs that are passed around the table, building their deck on the spot – requires that boosters are carefully curated to ensure their cards are balanced and synergise well with each other.

Although both Midnight Hunt and Crimson Vow are thematically tied to the gothic horror setting of Innistrad, they do contain different mechanics and features, leaving some MTG players afraid they won’t naturally complement each other without substantial curation. 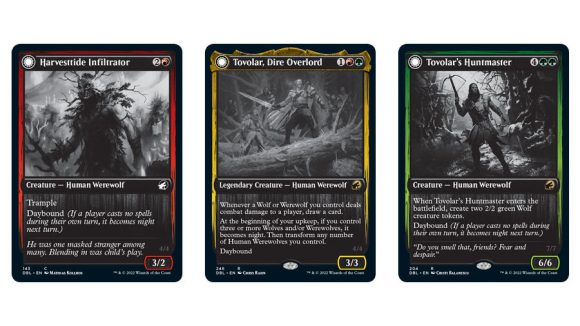 For the set’s full card list, check out the official MTG blog.

Innistrad: Double Feature will release on January 28, 2022. It will be sold in 15-card draft booster packs that include four commons, two uncommons, and one rare or mythic from Midnight Hunt, the same proportion of cards from Crimson Vow, plus a ‘silver screen’ foil card (a foil version of one of the new black and white alternate-artwork cards).

Before then, why not check out our pick of the best MTG books to read, or our guide on how to build a Magic: The Gathering deck if you’re a complete beginner?