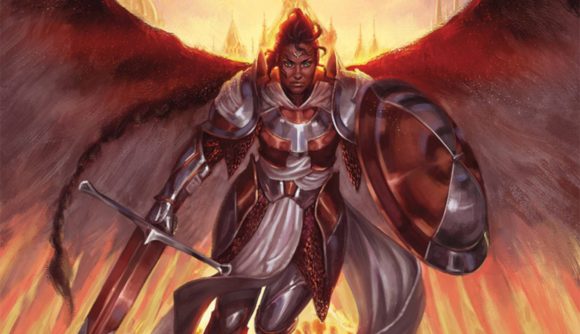 Wizards of the Coast announced last night that the next instalment in its Secret Lair line of curated Magic: The Gathering card sets will feature the art of Black artists in celebration of Black History Month. Secret Lair: Black is Magic will be available for pre-order from February 22 to March 31, in foil and non-foil variants, directly from the Secret Lair web store.

The collection includes seven cards illustrated by Black artists, two of which were revealed in a preview blog post yesterday by Game Designer Sydney Adams, the creative lead for the Secret Lair: Black is Magic drop. Shalai, Voice of Plenty, a Legendary Creature card illustrated by Ernanda Souza, depicts the guardian Serra Angel dressed in a suit of armour, wings spread, and sword and shield in hand, protecting a group of children behind her. Adams says it was illustrated to emphasise the angel’s African heritage, which has been ignored in previous artistic representations.

Ponder, a Sorcery card, illustrated by Ejiwa ‘Edge’ Ebenebe, depicts an aged Ikoria commander, Rielle the Everwise, guiding a young seer through her magical studies, both wrapped in white headscarves and African bangles. Adams said the card was illustrated to reflect the way older Black women support younger girls, and give a nod to the modern tradition of young Black Americans seeking out lost African spiritual custom “as a grounding way to heal and build community”.

Elsewhere in the blog post, Adams says the Secret Lair: Black is Magic collection “seeks to honor Blackness in its beautiful, global entirety, and to celebrate Black history and culture in both Magic: The Gathering and the real world.” 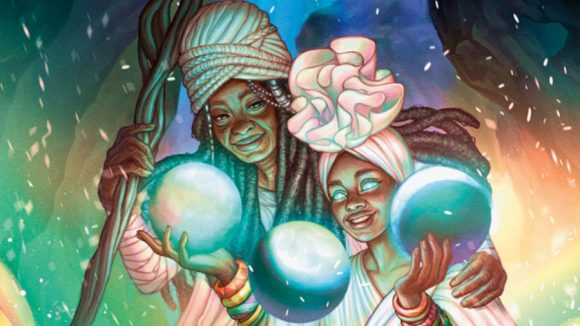 In another blog post, Wizard of the Coast’s first director of diversity, equality and inclusion, Jontelle Leyson-Smith, talked about the firm’s future approach to diversity: “We’re hard at work strategizing, building, and executing programs and change across our company.

“This includes products to cultivate meaningful progress at Wizards of the Coast toward better diversity, equity, and inclusion.”

Proceeds made from the sale of the Secret Lair collection will be directed to Black Girls CODE, a not-for-profit organisation that provides educational resources to young Black women and girls to foster their interest and ability within science, technology, engineering and mathematics (STEM) subjects.

Wizards of the Coast came under fire across the last year for its representation of ethnicities and racial traits in its tabletop products, including Dungeons and Dragons, although a recent playtest document released online hinted that the company may be making big changes to racial trait rules in the tabletop RPG.