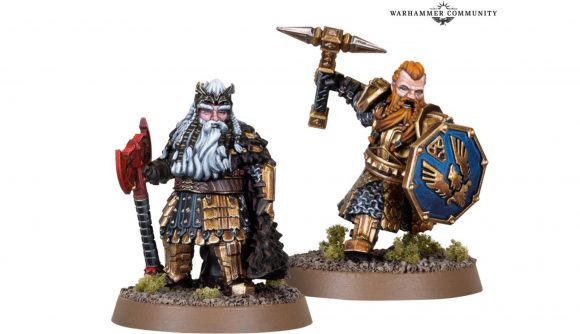 Middle-earth Strategy Battle Game is getting new miniatures for Dáin Ironfoot – Billy Connolly’s character in the third Hobbit movie – and his son, Thorin III Stonehelm, as they are 60 years on from The Hobbit’s concluding Battle of the Five Armies. These beasty-looking bearded boys were unveiled in a Warhammer Community post today, along with a run-through of their tabletop rules. They’re both Hero units for the Erebor Reclaimed faction, which, at the time of the War of the Ring, is waging a bloody war against Sauron’s Easterling allies.

While the Community post gives precious few details about the models themselves – except their dashing good looks – we reckon they’ll most likely be Forge World resin miniatures, like the existing Dwarves of the Iron Hills kits. There’s no date given for them to go up for pre-order, either, but we’d guess April – look for them in the next Forge World pre-orders round-up.

On the rules front, we learn a lot more: While Dáin is missing precisely one battle-pig mount from his previous appearance, he looks to be a very solid leader, benefitting from Hero of Legend, the Fearless special rule, and his own special ability, which has his Stand Fast! action affect all Erebor Dwarves, including Heroes, regardless of range.

He gets some suitably fighty stats of Fight 6, Strength 4, and 3 attacks, and a new weapon, in the form of the axe Barazantathûl – which the post says grants an extra +1 to wound. Ouch. We’re also told the 262-year-old dwarf gets a narratively appropriate debuff to jumping, climbing and leaping in games. 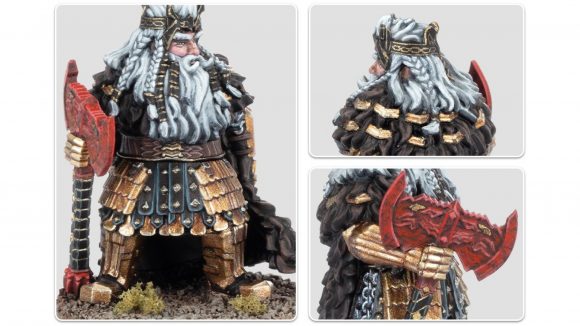 Dáin’s son and heir, Thorin III, looks to play quite similarly, and pack a comparable melee punch (he, too, has Fight 6 and 3 attacks). But the younger Ironfoot has a slightly more strategic bent overall; his Cool-headed special rule allows him to swap out his chosen Heroic Action for another,  in reaction to whichever Heroic Action your opponent has picked. Handy stuff.

Plus, he gets a chance to regain the Might he spends on Heroic Actions, for maximum utility. He also relies on his 3 Fate points to avoid taking damage, since he sports lower Defence and Wounds than his Dad. 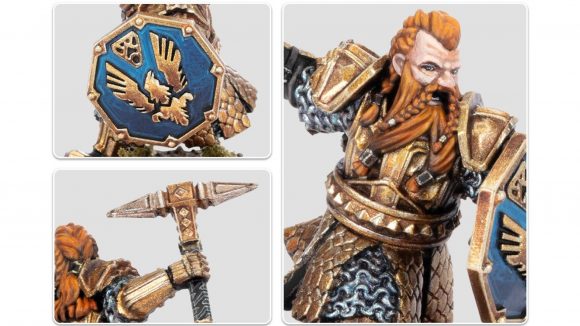 Middle-earth Strategy Battle Game was originally launched in 2006 to coincide with public enthusiasm for Tolkien’s world surrounding the release of Peter Jackson’s original movie trilogy, but then became less prominent among GW miniatures games for some years.

GW effectively relaunched the game in 2018, releasing a new Battle of the Pelennor Fields starter box and planning new ranges of models for both the Hobbit and Lord of the Rings settings.

The range now includes various resin kits from GW’s specialised Forge World brand – like the Dwarves of the Iron Hills Warband – as well as larger-batch plastic miniatures from the main company, such as the recently released model of Treebeard (plus Merry and Pippin).

In case you hadn’t heard, there’s also an awesome new Lord of the Rings tabletop RPG on the way from Mörk Borg makers Free League. Or, if you like your fantasy a little less Tolkien and a little more mixed up and brightly coloured, check out our guide to Age of Sigmar armies.