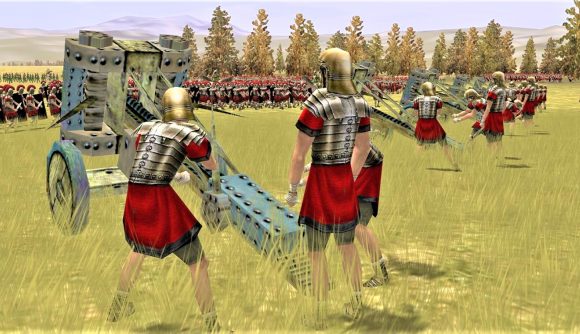 Total War: ROME: The Board Game will feature at least 13 different Roman military units, a unique technology tree for each faction – and possibly miniatures and metal coins. According to a developer diary and prototype ‘Faction Board’ from publisher Plastic Soldier Company (PSC) on Wednesday, the Rome faction can pay to train a range of different combat units – including Rome: Total War PC game staples, like the Velites skirmishers and Scorpion and Ballista siege engines.

Also shown in the prototype board is a three-stage technology tree, which you apparently progress through as you earn in-game Victory Points (VP), selecting specific tech advancements that grant economic or military benefits. PSC’s dev diary confirms that “each faction has its very own personalised tech tree, which allows you to play each faction exactly how you want to” – though we don’t know yet just how much the trees will vary for other confirmed factions, such as Greece and Carthage.

The board game’s current turn structure is also revealed by the prototype, which features a horizontal track of seven phases per turn – including two ‘Bid for Initiative’ phases, and what appear to be two separate phases for military campaigning (marked Campaign YR1 and YR2).

In the dev diary, PSC also explains that the prototype Faction Board will have ‘slots’ marked around each edge for the positions of the player’s various game cards – Navy Cards on the left; Army Cards along the bottom, and Action and Army Reserve cards on the right. We’ve not seen anything of most of these yet – although PSC has shared prototype Army unit cards for the game’s StratPlay and BattlePlay combat systems.

And, in addition to traditional cardboard tokens and cards, PSC is now saying the game may feature miniatures for its Navies and Army generals, as well as “beautiful coins for the Denarii”, but only “if we get enough backing for the game” – hinting that such tactical extras might form stretch goals for the campaign. 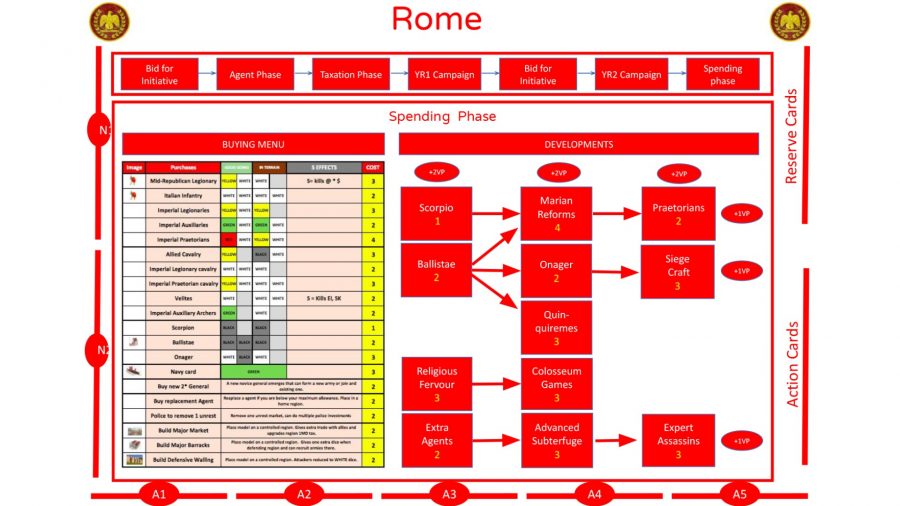 And the other options shown in the Roman ‘buying menu’, which are presumably subject to change in development:

And here are the turn phases, as they currently stand on the dev diary‘s prototype image:

Total War: ROME: The Board Game is due to begin crowdfunding via its Gamefound campaign page on Tuesday, November 30, 2021.

You can catch up on all the essential info on the game in our full Total War: ROME: The Board Game guide.