Few videogames are bigger than Skyrim. Since launching ten years ago, Bethesda’s fantasy RPG has become one of the most popular games of all time, and secured a longevity that few games can match. It’s a classic; a game that everyone knows, and even those with only a fleeting interest in videogames would recognise. Now, it’s coming to the tabletop.

Launched for crowdfunding last week by Modiphius, The Elder Scrolls V: Skyrim The Adventure Game is the first time the mammoth videogame has been recreated as a board game. Billed as a co-operative adventure, you’ll play as a hero of the Blades – a declining order of Imperial protectors – and complete quests spanning the many Holds of Skyrim. It’s narrative is split into two campaigns and is partially a prequel story, in which your decisions will influence later choices and events.

We sat down with one of the designers of the Skyrim board game, Juan Echenique, and head of Modiphius Chris Birch to find out more about how the game plays, how it captures the videogame, and the design decisions behind it.

Wargamer: Can you give me an overview of the board game?

Chris Birch: We call it an adventure game. It’s not a dungeon crawl. It’s a game where you will create a character that suits your playstyle: do you want to be a sneaky Khajiit? Do you want to be a brute-force Nord? Spell-wielding Altmer, or an Altmer with a big sword? You create your character, and you’re going to travel around the holds of Skyrim on an enormous number of quests.

So the big pitch, I think, is to go back to Skyrim with friends, because we’ve never been able to do that. Of course, we’re not trying to recreate the videogame, because, let’s face it, we’ve all played enough hours in Skyrim – and will happily do so again. So what’s different? Well, I guess it’s the fact that we can do it together. 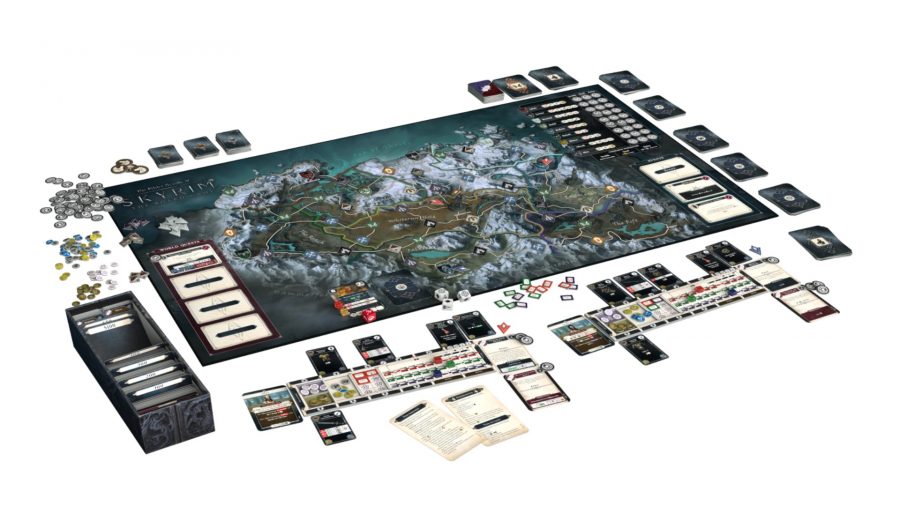 What elements of Skyrim have you tried to capture in the board game?

Juan Echenique: There are many things from the base game that were very interesting for the board game that we wanted to capture, starting with the lore. The story of The Elder Scrolls is just mind blowing, it’s too much. It has more story than the history of humanity, if you look at it that way. So we tried to respect and honour that legacy, and that’s partly why we start the game 25 years before the appearance of the Dragonborn, so we can talk about the Great War, we can talk about the tensions between the Altmer and the Empire, we can talk about what happened with the blades who escape into Skyrim.

So all this story in the videogame, which is so important but can be so hard to follow, here has a central place. You’re suffering the consequences of the Concordat in your flesh with people trying to kill you because of that.

And also the idea of customising your character. You can be a sneaky Khajiit or you can be a spell-weaving Altmer, but it happens that some players tend to take an Altmer with the best intentions in mind to be a spell-weaver, and suddenly things change. You suddenly become a barbarian who can pick looks. Your archetype helps you, but you’re not tied to it, and a sense of freedom when customising your character is essential to us. 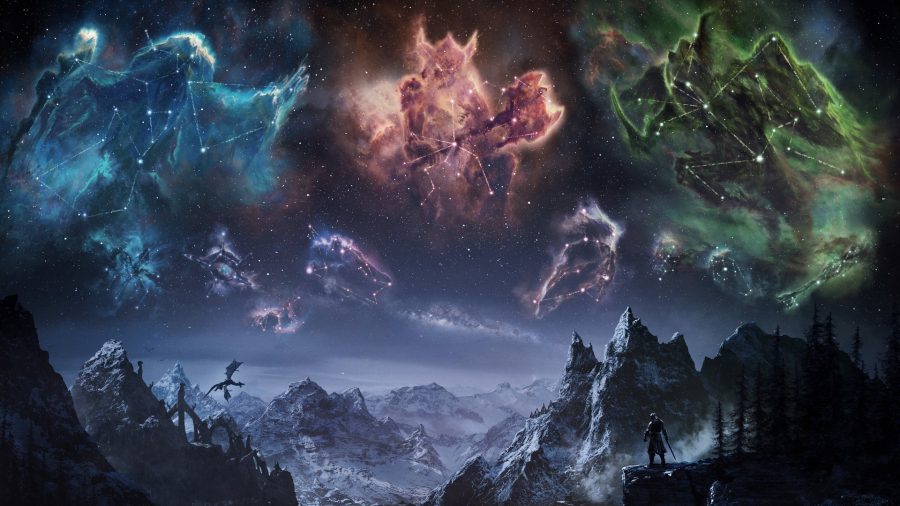 The base board game includes two campaigns of three chapters each. How do they differ?

JE: There are quite a few mechanical differences from campaign one to campaign two. Campaign one is introductory and is a prequel in terms of story. There are a few mechanics that are unique to that campaign, but when you get to campaign two, you suddenly start right before the Dragonborn appears, and right into the Civil War. So there’s a very, very soft, competitive dynamic going on, because players are split into factions: some will be with the Stormcloaks, some with the Imperials, but they’re also all blades fighting for the same cause. That, mechanically, makes a huge impact.

There’s a third campaign [included in the Dawnguard expansion box] that happens right after. Again, it’s a very soft competitive situation in which some people are vampires, and some people are in the Dawnguard. Those are natural enemies but, again, there’s a major plot going on behind the scenes that means you have to work together one way or another. So there’s new mechanics added to the game that change the way you approach the board, in general terms. The game includes mechanics for day and night, so vampires during the day are not at their best. 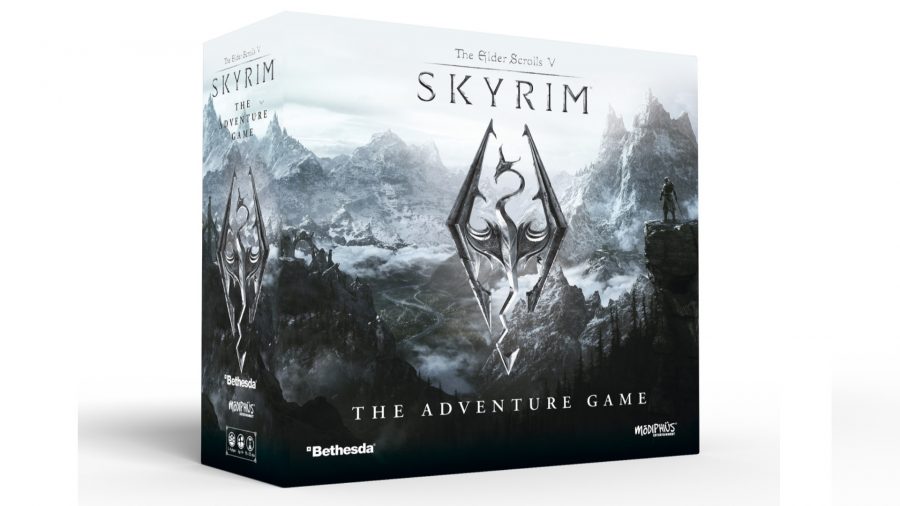 The replayability of the game has been emphasised during the crowdfunding campaign. What keeps it fresh on each playthrough?

CB: I love this game called Defenders of the Realm, which is kind of fantasy Pandemic, and Zombicide: Black Plague, which is really stripped-down, super simple D&D. I want it to be like one of those iconic adventuring, levelling-up, wandering around, doing cool stuff board games. When you feel that experience, not a dungeon crawl, you go, ‘let’s get that one out’.

There’s a lot going on in the rules, but actually, after like two or three turns, that’s basically it. You can move, you can do an encounter, you can do a dungeon, you can level up, and yet the breadth of it is amazing. While there are only nine named Holds, there are wilderness spaces, caves, mines, tombs, ruins, and Dwemer cities in every hold. So, the quest structure is really in-depth, as it will say you must go to a cave in Haafingar, or some ruins in Winterhold.

You are sent all the way across the board, and classically what happens is you’re just on your way to Haafingar, and now you have to go to Winterhold thinking, ‘Oh, I just came from there’, just like the videogame. And you got to go, ‘Wait a minute, but if I go to Whiterun on the way I can do that quest, and we need to do that because it’s about to fail, and if it fails bad stuff happens’. There’s always interesting choices and challenges to make. 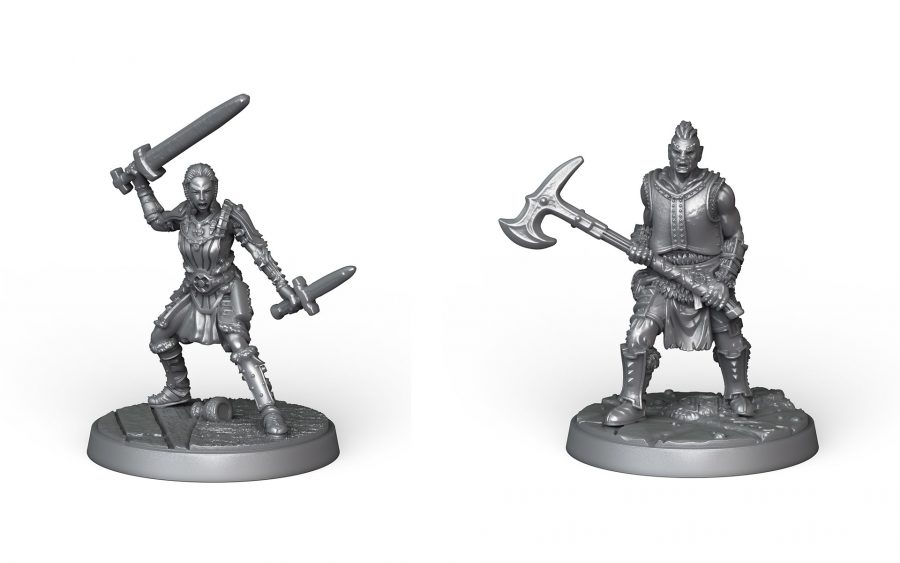 Why create the Skyrim board game as an adventure game, rather than a dungeon-crawler or any other genre?

JE: We already have a wargame of sorts, Call to Arms, which does a fantastic job. The world of The Elder Scrolls is huge. The lore is huge, the stories are huge, every story and every character is totemic and massive. A smaller game in scale wouldn’t do justice to that if you were focusing only on the details of the combat and equipment. We’re focusing more on the macro in terms of the story, what the characters are, and what they experience. The best way to honour that is to make an adventure game that gives you a big map.

How did you go about designing the game’s prequel story?

JE: We came up with that by researching a lot of the story of Tamriel, and when we stumbled upon that the Great War is in living distance to the events of Skyrim, it’s 25 years before so a character could be in both stories, we realised we’d hit something. We can have characters who have experienced the Great War as young people, and then they are older and they have a different approach to life when the Dragonborn comes.

So, in a way, it’s a life chronicle for these characters. You walk with them through that chronicle. The things that happen to them, depending on your choices, are mythological. They’re not the Dragonborn; they’re not heroes that are the chosen one. They’re the chosen one in a completely different way and the things that happened to them are pretty huge. Going for a prequel helps a lot. 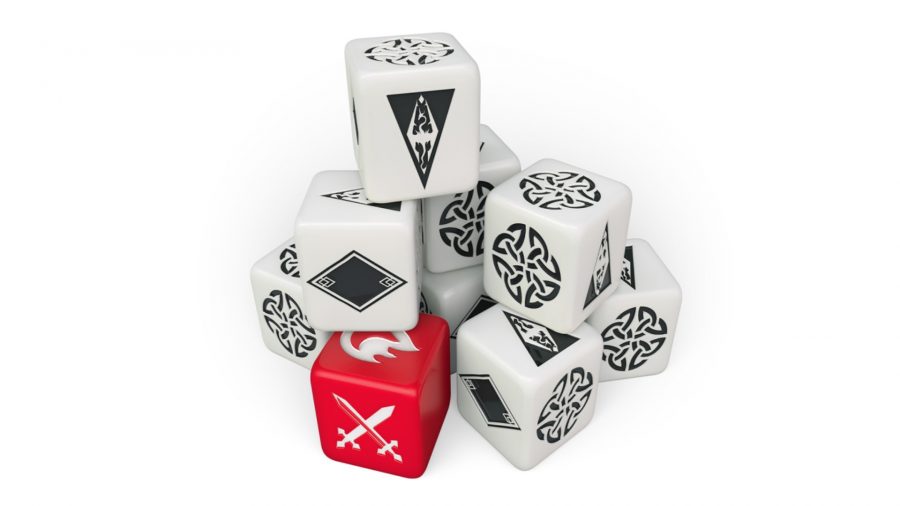 What parts of the board game were dropped or changed during its design process?

JE: We’re close to 60 versions of the game. That’s been a lot. Everything you can imagine, 90% of that has been tried. 10% or 20% are fantastic ideas that we didn’t even contemplate. We tried a version of the game where the characters move together all the time, we tried another version where mostly it was competitive, and there was little in terms of story. But our philosophy of going cooperative and creating shared experiences made it better very quickly.

We went through so many different approaches to the combat system and the narrative mechanics. We tried different types of dice, we tried to skip dice all together, and we went back to dice. We also tried several different ways of mitigating luck, which involves so much maths.

CB: The core concept’s been the same all the way down the line: building characters and travelling around. At one point the characters were all travelling together from hold to hold, and would all split off to do different things within that hold. But we found it was too limiting. People wanted to do different things and not be stuck with the same lot all day. Now we’ve got this point where people come together because they want to, because it really incentivizes you to do dungeons together or to help each other with very difficult quests and some of the bigger creatures that are going to appear. 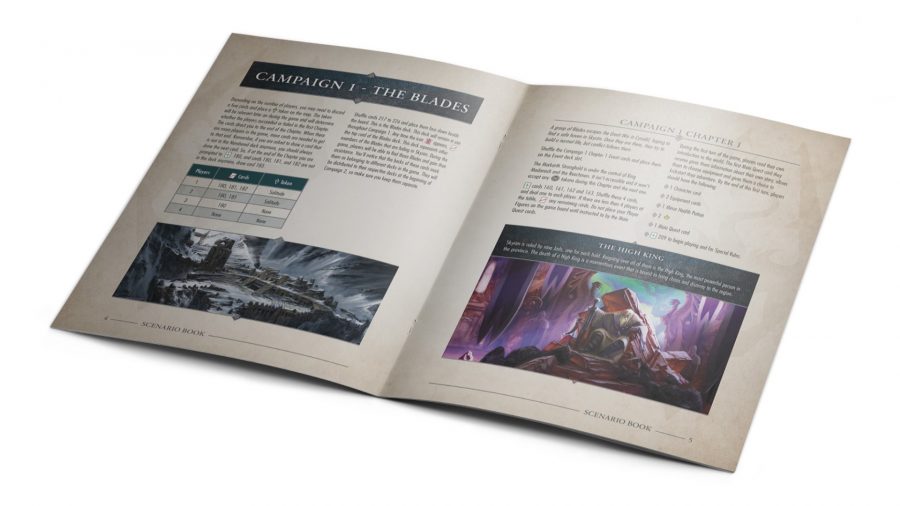 What’s next for the game after it’s in backers hands’ next summer?

CB: Hopefully we’ll see that reality lives up to the dream, and we’ve already got some cool ideas for what we would follow up with. This is very much a prequel and the main gameplay is as the events of the Skyrim videogame is happening, so there’s all sorts of stuff we could do next. Like in the Dragonborn expansion there’s the other island that you can go to, there’s all sorts of storylines we could expand to. We’ve literally scratched the surface of the types of stories, creatures, and treasures in the game.

Modiphius has now produced an Elder Scrolls miniature wargame and a Skyrim board game, but many players might know you best for your tabletop RPGs. Is a Skyrim RPG on the table?

CB: The trouble with roleplaying games, as you can imagine, is there’s an enormous amount of material [Bethesda’s] got to read and approve. They’ve been amazing to let us play in their world with miniatures and board games, so maybe they’ll consider it if this does really well. We’d love to do it. They let us do the fallout roleplaying, so who knows what the future holds. But I’m pretty sure we’ll be coming back to Skyrim a lot in various tabletop game guises.

The Elder Scrolls V: Skyrim The Adventure Game iss available to back on Gamefound now.