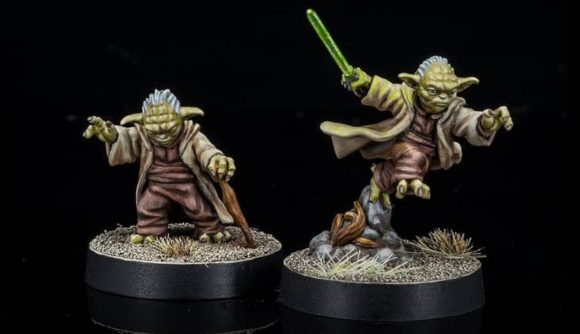 The upcoming Kashyyyk expansions for Star Wars: Legion will not only introduce some familiar faces to the miniatures wargame, but add new upgrade cards alongside them. Revealed by publisher Atomic Mass Games on Facebook yesterday, the Yoda Commander expansion will include a couple of new Force upgrade cards, while Chewbacca will be sporting some additional Training cards.

For the Jedi and Sith playbook, Force Lift lets you move any barricade within range one to another spot at range one of its current position. The exact meaning of ‘barricade’ isn’t specifically defined, but the Legion rulebook gives examples of sandbags, fences, and low walls. So, the card could be useful for hastily protecting your squishy Corps, or your Commander if they’re in a pinch.

Burst of Speed, meanwhile, lets you increase your maximum speed to three for the whole round, at the cost of one Immobilize token. It looks particularly useful when paired with slow-moving, but hard-hitting Commanders, such as Darth Vader.

Atomic Mass Games says the new Training upgrades will come with Chewbacca or the new Wookie Warrior unit. Protector lets you cancel any critical hits as if they were standard, while unit is using the Guardian keyword ability. 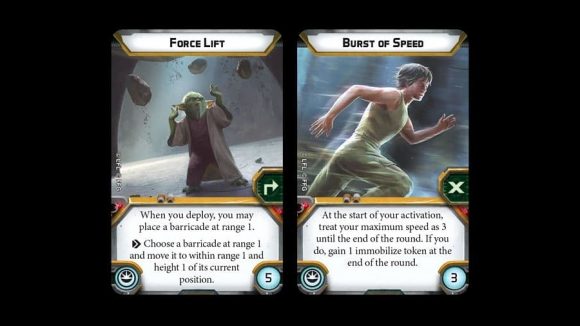 The final card, Into the Fray, grants one Surge token any time a unit at range one activates. It looks to build upon the Wookies’ melee focus.

The upcoming Yoda and revised Wookie Warrior expansions are part of a broader Kashyyyk expansion line releasing this summer, and will come alongside Magnaguard and Super Tactical Droid sets.

We’ve already seen some details about the new releases, including Yoda’s Artaru Mastery keyword, which lets him perform two attacks, gain a Dodge token after attacking, and deflect incoming blaster shots. Similarly, we’ve seen that the Magnaguards will be the first dedicated melee unit for the Separatists, and can block incoming shots targetted towards their Commander. 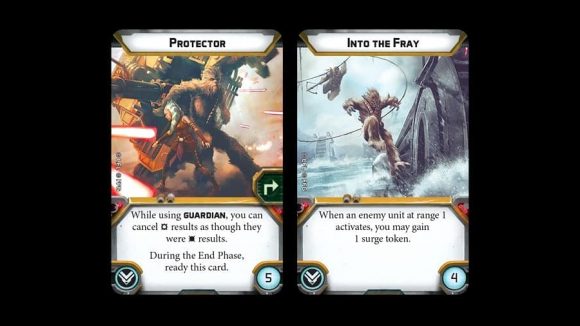 We haven’t yet had a glimpse of what new upgrade cards will be coming with the Super Tactical Droid and Magnaguard units, although as we approach their summer release, Atomic Mass Games might share more information.

If you’re looking to expand your miniatures collection, read our pick of the best Star Wars: Legion expansions, and don’t be caught out when you have not Fleet Troopers kicking about.