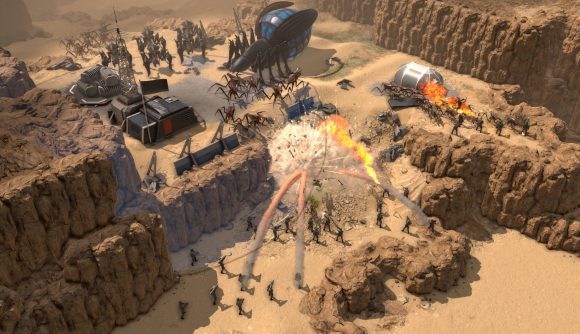 After a year of silence, publisher Slitherine Software has today revealed more details about its sci-fi, real-time strategy game Starship Troopers: Terran Command. Closely based on the narrative and world of Paul Verhoeven’s 1997 cult movie, the game will feature a 21-mission story campaign and defence-heavy gameplay, as players command the Mobile Infantry against swarms of giant Arachnids. A firm release date hasn’t been set, but the game is expected to launch later this year.

Following the original narrative from the 1997 satirical movie and its sequels – Starship Troopers 2 (2004) and ‘3 (2008) – you’ll start your command of the Mobile Infantry fighting swarms of giant Arachnid bugs in the doomed assault on Klendathu, before moving on to the desert planet of Kwalasha – a mineral-rich, sparsely populated planet which just happens to have a generous helping of Arachnids in need of extermination.

Taking command of the humanity’s diligent defenders, the Mobile Infantry, you’ll be tasked with holding the line against swarms of the Arachnid threat. Since you’re constantly outnumbered by the horde of giant bugs, Slitherine says the game’s moment-to-moment strategy will emphasise defence, base-building, and capturing outposts to secure a foothold across the map.

While the Arachnids benefit from massive numbers, the Mobile Infantry’s technological might will see them field a heavy arsenal of guns, barricades, airstrikes and mechs against them, all of which get teched up and upgraded throughout the game –  and all of which are deliciously reminiscent of their namesakes in the Starship Troopers film franchise.

Slitherine says it aims for Starship Troopers: Terran Command to capture the feel of the original film, with platoons of fresh human recruits used as dispensable cannon fodder in the meat grinder of battle [It’s like some kind of a satirical metaphor for the Cold War’s hot wars, or something – Ed.] All, of course, part of the patriotic duty to humanity’s glorious Federation. Expect dismemberment, limb-tearing, and other gory scenes to accompany the gung-ho optimism of your loyal troops. 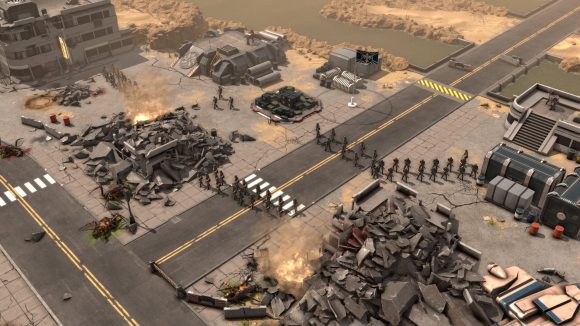 Alongside the narrative campaign, the game will also various feature skirmish mode scenarios, designed to test your skill as a commander – we expect to see more about the multiplayer in due course; watch this space!

You can catch more details about Starship Troopers: Terran Command today in Slitherine’s Twitch reveal live stream at 5:00 GMT (12 pm ET/ 9 am PT). We’ll be there – will YOU?

If this has got you in the mood for strategising across a sprawling map, why not read our guide to the best war board games?