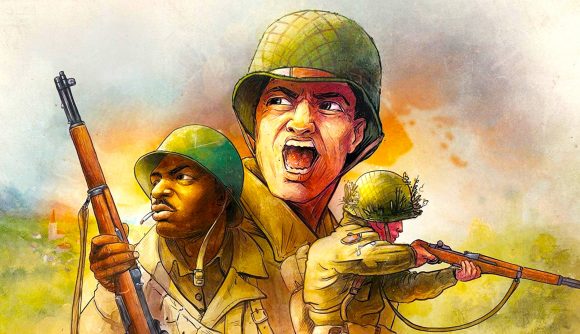 World War Two deck-building game Undaunted: Normandy is getting a “faithful recreation” and “additional scenarios” in a PC adaptation, says the game’s digital publisher Bookmark Games. According to a statement released by Bookmark on Monday, “Undaunted Normandy will be available for Early Access from Q3 2022, with a full release planned for Q1 2023”.

Undaunted: Normandy will initially be coming to PC, Mac and iPad. The game will also get an official solo mode for the first time – but it seems that a full solo campaign won’t be available until the game’s full release. Bookmark developer Richard Berger says that there are “no plans for [release on] additional platforms right now”.

Other notable features of the digital adaptation include the tabletop game’s distinctive “card and dice driven mechanic”, online cross-platform play, original music, and a 3D rendered map of 1944 Normandy to set the scene. You can see what Undaunted: Normandy looks like in digital form in the game’s announcement trailer below, where digital soldiers recreate battles between American and German forces after the D-Day landings of 1944.

According to Berger, this 3D look has been an important part of adapting Undaunted: Normandy for the screen. “The challenge and something that we’re still working on is getting away from the 2D board view to create something that looks and feels more engaging for the player”, he told Wargamer. “I hope that’s something we’ll be able to achieve by the time people get their hands on the game”.

The original Undaunted: Normandy was designed by Trevor Benjamin and David Thompson in 2019, and it won the Golden Geek Award for Best Wargame that same year (so it’s unsurprising to see it on Wargamer’s best war board games list). The designing duo have previously worked together on war games like War Chest and Undaunted: North Africa – no doubt helpfully informed by Thompson’s work for the US Department of Defence.

“I love the Undaunted Normandy board game”, Berger says. “In building and testing the game, I’ve played countless games. And as a game, it doesn’t get boring – the design that David Thompson and Trevor Benjamin came up with stands up really well to repeat plays.”

Want more war but in a different setting? Check out everything we know so far about Total War: ROME. Or, if you want more digital recommendations, we have a list of war games you can play for absolutely free on PC.