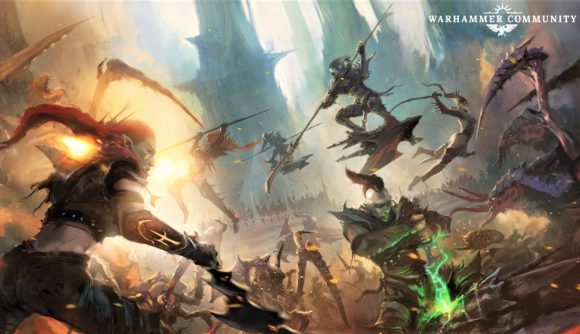 With somewhat less promotional preamble and fanfare than we saw for previous tomes, Warhammer 40K’s latest 9th Edition codex – for the Drukhari faction – finally got a release date in a Warhammer Community post yesterday. The book goes to pre-order on Saturday, March 20, releasing a week later on March 27. Pricing will likely follow previous full Codexes at $50 / £30, with a plush collector’s edition at around twice the price ( or a bit more).

GW lists the codex contents more or less as standard; we can expect around 90 to 120 pages in all, with the first half being lore content with snazzy artwork and photos, and the rest taken up with the army’s rules, and datasheets for all its models.

The post also confirmed that the long-trailed Piety and Pain boxed set (comprising small forces of Drukhari and Sisters of Battle) would release at the same time as the codex, along with the customary set of player’s aid cards, a faction-themed dice set, and a Drukhari Combat Patrol starter box. The first such Combat Patrol box for any Xenos army since they replaced GW’s ‘Start Collecting’ kits last year, the box includes an Archon HQ, ten Kabalite Warriors, five blade-toting Incubi, and two armed skimmers: a Raider and a Ravager.

What limited ‘leaks’ and GW promotional teasers there have been about the new rules content in the new Drukhari codex suggest the faction is not getting as serious an overhaul as some others in the 9th edition rollout. 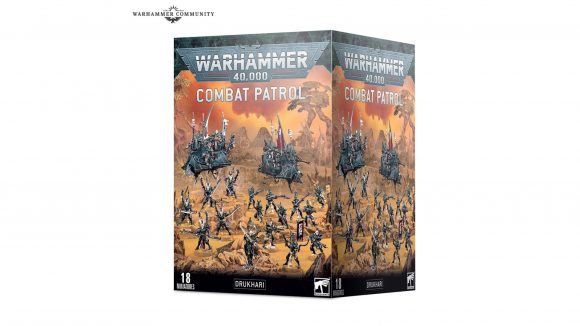 Short version? They’re getting more flexible list-building rules, more attacks across the board, and damage increases to various weapons to bring them in line with 9th Edition’s increasingly tanky units. You can check out our codex releases guide for a fuller idea of what we can expect, and a recap of the reveals so far.

Or, if the new Drukhari Combat Patrol box has caught your eye, bookmark our Combat Patrols guide; we’ll have a breakdown of the new box on there later today.