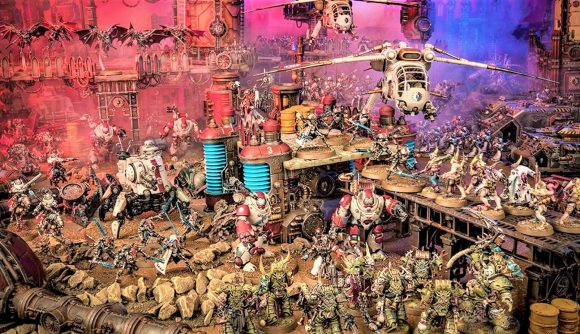 Games Workshop has released a new ‘Balance Dataslate’ rules update for Warhammer 40k which hits the two armies currently performing best in the competitive scene – Drukhari and Adeptus Mechanicus – with a range of points increases, alongside a mixed bag of other rules changes and tweaks to other factions.

Among other changes, the fast-moving Drukhari army has seen the points cost of its Succubus HQ increase by 20 points, from 60 to 80; Wyches have gone up from 10 points per model (ppm) to 12ppm; and Raider transports now pay an extra 10 points for the Dark Lance heavy weapon, meaning that popular Raider loadout has increased in price from 95ppm to 105ppm.

For the Admech, the two most popular Archaeopter aircraft variants (hallmark of many successful tournament lists in recent months) have both gone up by 20 points – the Fusilave to 150 and Stratoraptor to 180. The nippy mobile lascannon platforms that are the Ironstrider Balistarii go up 10 points to 85ppm (including their guns), while the Vanguard and Rangers troops units slip up by one point a model, to 9ppm, spreading into a general cost hike for the army as a whole.

Besides these (and other, smaller points changes), the Balance Dataslate packs a cocktail of important, and largely unexpected, rules changes that will change the shape of many Matched Play games quite significantly.

The most important are:

The balance changes – first publicised in a Warhammer Community article on Tuesday – are the first in a “new, quarterly series of balance updates”, according to GW, which will deliver smaller, targeted packets of “rules tweaks” at intervals. These will arrive in between the annual Chapter Approved Grand Tournament Mission packs, which update every aspect of the competitive game.

These smaller updates aren’t usually intended to include serious points changes, GW says – but the Drukhari and Admech nerfs were announced early because “These two factions have been dominating the Warhammer 40,000 meta for some time now, so these points adjustments are being brought forward to help to rein in their dominance”.