By all accounts, the future looks pretty grim for humanity. We manage to get off our little mud ball and dance amongst the stars – but there’s aliens, daemons, and heresy floating in that inky sea we call space. It doesn’t take a long stay in the war-torn universe of Warhammer 40k to realise that there’s not very much there to smile about.

Even when it comes to playing the tabletop game, there’s a fair amount of drama and tragedy. Every game has the chance to bring you soaring victory, or crushing defeat. Playing Warhammer 40k can be a serious business, and one that some folks approach with a level of gravity befitting a game of grandmaster chess.

But there’s light among those stars. No gang of fans can have its levity glands stifled for long, and lovers of Warhammer 40k are no different. Busily beavering away, 40k fans have spent the entire Internet Age crafting their very own memes about the game and its surrounding universe. It’s certainly a welcome relief from all the grimdark out there.

Maybe you’ve stared at a meme for too long, stuck scratching your head, or maybe you just need some new funny fodder to throw at a friend. Either way, we’re here to show you the best Warhammer 40k memes, as well as offering a bit of context on what in the Emperor’s name they actually mean, and from whence they came. 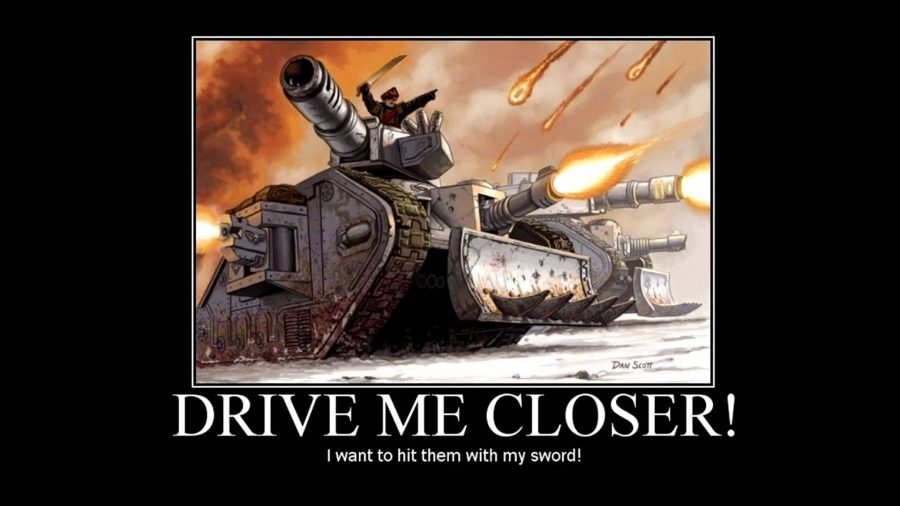 We’ll start you off with an oldie, but a goodie. Riding atop a Leman Russ tank (and clearly unsatisfied with the offensive potential of that vehicle’s main Battle Cannon) this Imperial Guard (or should we say Astra Militarum) Commissar demands his driver take him closer to the enemies of the Imperium, so he can strike them with his sword.

This meme’s precise origins are obscured by time, but it clearly derives from one of the ever-current discussions amongst Warhammer 40k players: why, in a universe populated by eldritch magical beings and giant robots armed with volcano cannons, is melee combat still so popular? Answers on a postcard, folks. Per our historical research, the sword-combat-from-the-cupola-of-a-tank meme has since been legitimised at least twice by the GW gods: firstly by appearing as a voice line in Dawn of War II, and secondly in the recent Horus Heresy novel, Master of Mankind. 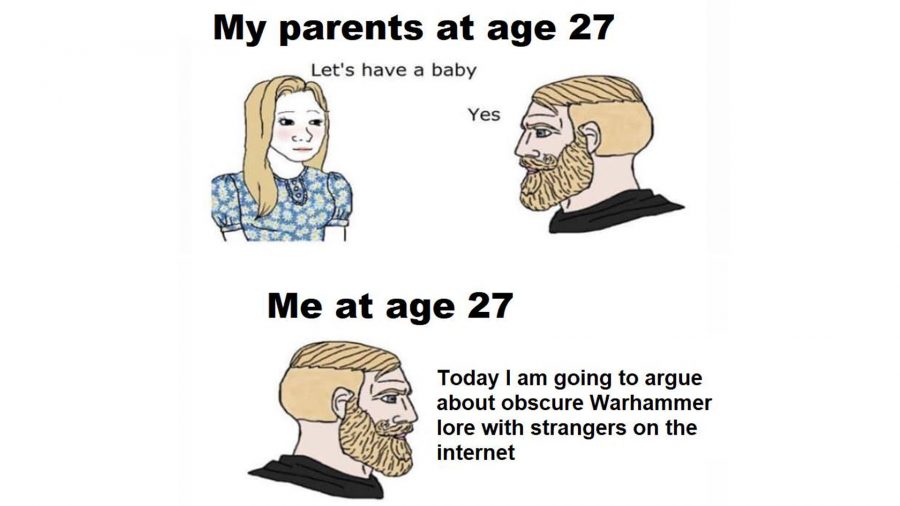 This one… well, this one just gets more of a bitter laugh every year. Originally posted on Reddit’s most prolific bastion of Warhammer memery, r/grimdank, this meme shows how times have changed.

Our parents may have been settling down by the time they were nearing 30, but those of us in the millennial cohort, and younger, are waiting longer and longer to do so.

State of play: Keep up to date with our 40k 9th edition codex guide

Why are we delaying starting a family? Why, to spend our time online arguing about rules errata, what does, or doesn’t, constitute cover, and whether or not Erebus is the greatest hero the universe has ever known, of course.

It’s funny if you’re 27. It’s grimly funny if, like the author of this piece, you’re knocking on 40 and you’re still arguing with strangers about obscure Warhammer lore. 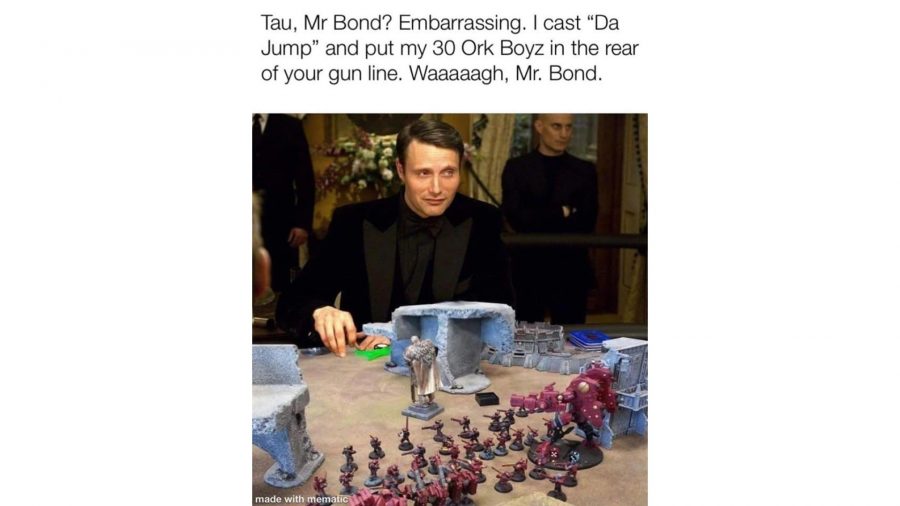 The T’au are a strange lot in the Warhammer 40k universe. They have no psykers, they have a ridiculously small empire, and they don’t even have Warp travel. Really, the only reason they exist is because they’re too small and insignificant to warrant the effort it would take one of the larger factions to wipe them out.

This oft-mocked fragility is reflected on the tabletop, too. The T’au are textbook ‘glass cannons’ – brilliant at shooting, not great at being shot. Or hit. Or punched. Or standing firm against a strong breeze. This meme, another r/grimdank regular, featuring everyone’s favourite poker player from 2006’s Casino Royale, pokes a little bit of fun at that. “Oh, Mr. Bond, you turned up with T’au? I hope you like a heavy green dose of Ork tide into your artillery.”

Much like some of the other memes in this list, this one has stretched and twisted into a multitude of variations. But one thing remains the same: Le Chiffre is confident in his army, and ol’ Jimmy Bond should’ve thought twice before committing so heavily to a foolish direction. 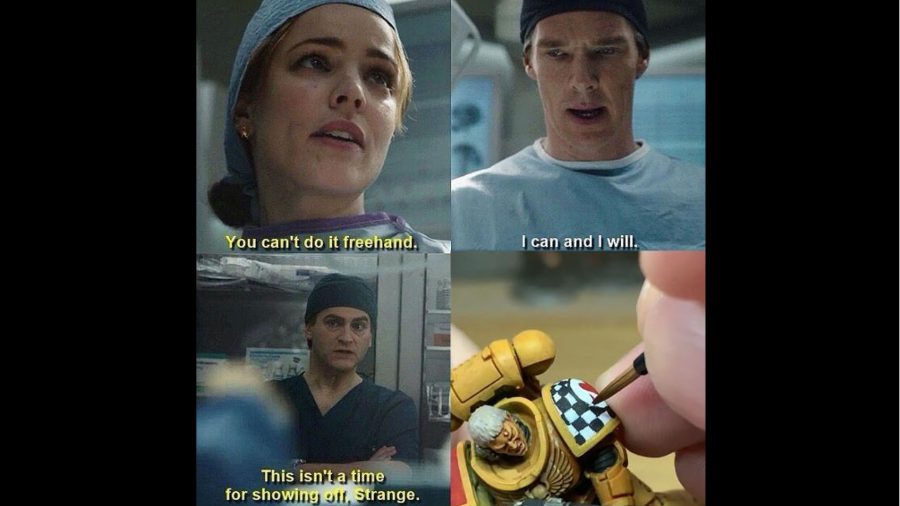 Dr. Strange is a Show-off

Dr. Strange is a character whose rough edges are never worn off. He’s arrogant, rude, and even worse – the best at what he does.

We all know someone like Dr. Strange, as this meme by u/SettraTheTitleBoi points out. Someone arrogant, who takes risks with their freehand painting, and what’s worse – it bloody well works out for them, too.

Way of the brush: Learn how to paint miniatures with our guide

They come away with banners and Space Marine shoulder pads that look like stencils, and they did it with just a paintbrush.

Meanwhile, you’re left with something that looks like a child had a tantrum over it, that took you three weeks to finish. Plus, you managed to drink from your paint-water mug. Unfair. 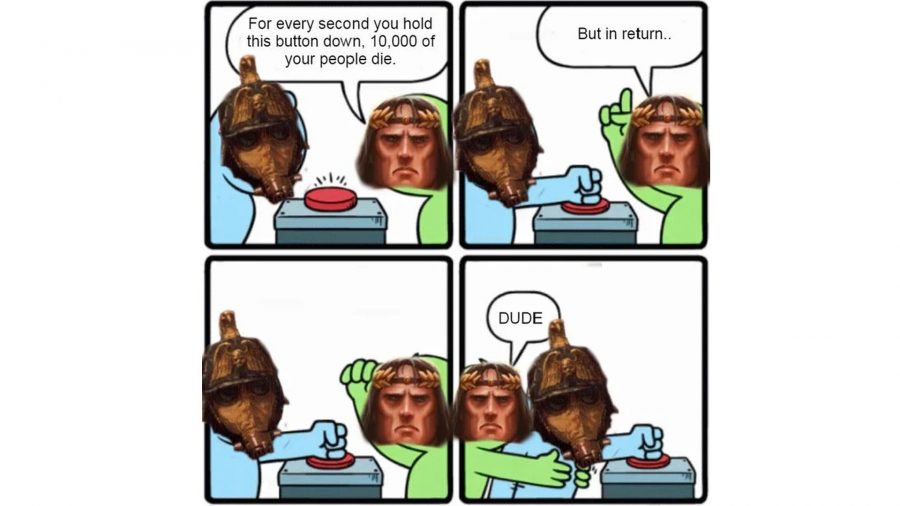 The Death Korps of Krieg seriously need to chill out

There are an absolute tonne of memes about the Death Korps of Krieg.

These gas mask- wearing soldiers are serving eternal penance for their home world’s past insurrection against the Imperium, and will do anything to atone. A-ny-thing.

The memes that come from these fan-favourite, WW1-German-inspired troopers all follow a similar theme. The Death Korps are unforgiving, implacable foes who will carry on fighting until the last man (and sometimes further than that).

This example, from u/TheCatsActuallyOsama – adapted from an original animated webcomic from MrLovenstein – shows just what you can expect when checking out the Krieg guys. They’re familiar with death… maybe too familiar. Maybe don’t show them this meme; keep it to yourself. For safety’s sake.