Warhammer 40k has seen its fair share of board game adaptations, from Relic and Lost Patrol, to Labyrinth of the Necrons and Blackstone Fortress. There have even been adaptations of other Games Workshop products, such as the Horus Heresy version of Talisman. But what’s really interesting are the 40k crossovers with established games that bring in both new audiences and gameplay ideas.

The upcoming Warhammer 40k crossover with Magic: The Gathering – announced in February this year, as part of the trading card game’s Universes Beyond card series – is something we’re eagerly awaiting – and I don’t even play Magic! However, if I can construct a mono-Guard or Ork deck (would red or green be more appropriate?), I’ll crush Ravnica with rank upon serried rank of 1/1 Guardsman minions. Sadly, not all crossovers have been that well thought-out, with the 40k licence often handed to franchises that are more well-known than actually deserving (I’m looking at you, Monopoly 40K).

On the other mechadendrite, there are plenty of good – nay, awesome – board games that could become a bit grimmer and darker. Let’s run down a list of five, shall we? 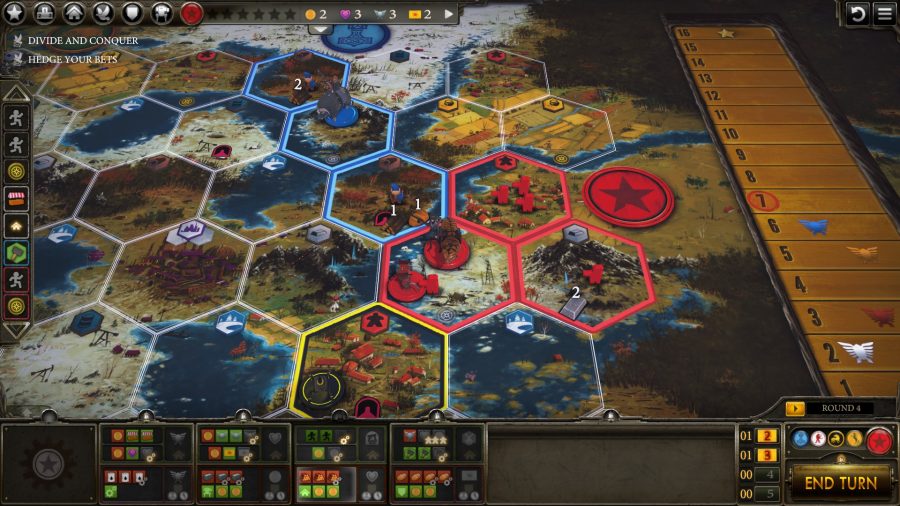 Scythe recently burst onto the PC gaming scene via 2020’s Iron Harvest. Set in Scythe’s 1920s, alternate-history universe, the video game seemed to be the sole inheritor of Company of Heroes’ furious, squad-focused gameplay (in the days before Company of Heroes 3 was announced, that is). Ordering around infantry, seeing clanking dieselpunk robots duke it out – what’s not to like?

Ironically, Scythe doesn’t incentivize combat. In fact, only one faction in the game can gain more than a single victory point for fighting. In the universe of Warhammer 40,000, this wouldn’t ordinarily translate well, since most factions in the grimdark future are ready to throw down to the death, albeit to the great consternation of 4X players).

Crème de la crème: These are the best board games

Unless there is only one faction in play. A new world, untapped resources, and a big factory at the centre? Why, that’s just the perfect ground for an Adeptus Mechanicus expedition. And to provide some incentive to fight, let it be several expeditions from different forge worlds. Outside of a huge techno-theological conflict, Mars and Graia wouldn’t come to blows,but in a race to uncover some techno-arcane knowledge – possibly even an STC – there’s certainly some skirmishing to be done.

Best of all, Scythe already includes miniatures, so Scythe: 40K could fittingly have tiny models of clanking macro-automata, as well as representations of each expedition’s leading Magus. The perfect crossover. 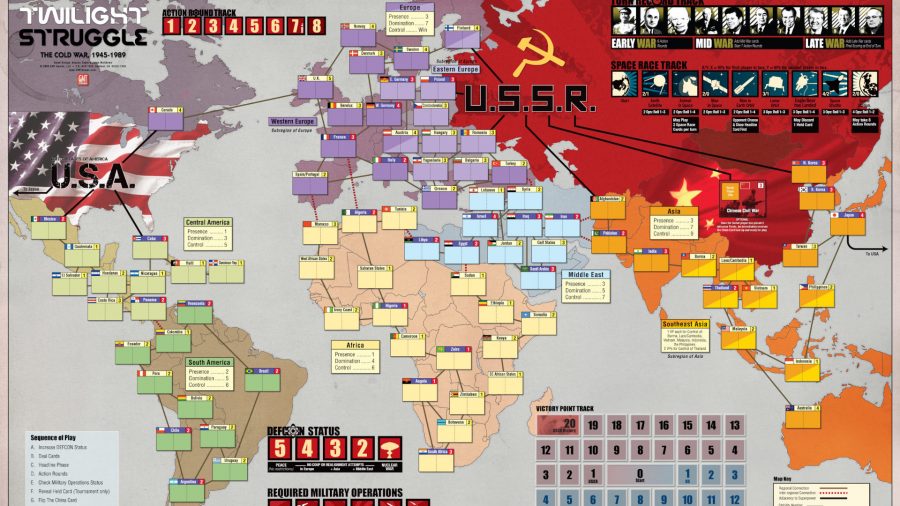 Twilight Struggle is the two-player Cold War board game. It’s won all the accolades, and is the number one wargame on BoardGameGeek, 16 years after first publishing. The game runs on rounds, in which opponents play cards to benefit one or the other side (unless it’s the Olympics, a card which everyone will ignore), hoping to grow influence in strategic countries, and dominate entire regions for points.

There were many momentous occasions during the Heresy

So, how about making the Cold War go really hot with a Horus Heresy crossover? Sure, you’d have to get creative when adapting the DEFCON mechanic, which in the original game spilled the conflict into nuclear annihilation. Could it be replaced by a Ruinstorm counter, representing Horus and his allies’ hesitation over the universe’s possible consumption by a giant daemon storm?

The rest is much easier. There are plenty of battles and events to feed into the card mechanics: from shifting allegiances of forge worlds and knight houses, to Ireton MaSade coming out of retirement. There were many momentous occasions during the Heresy. There’s even a way to adapt the early, middle, and late Cold War split, making The Scouring the final phase of the conflict to represent the traitors’ suppression after the Battle of Terra.

You know, the more I write, the better this idea gets. 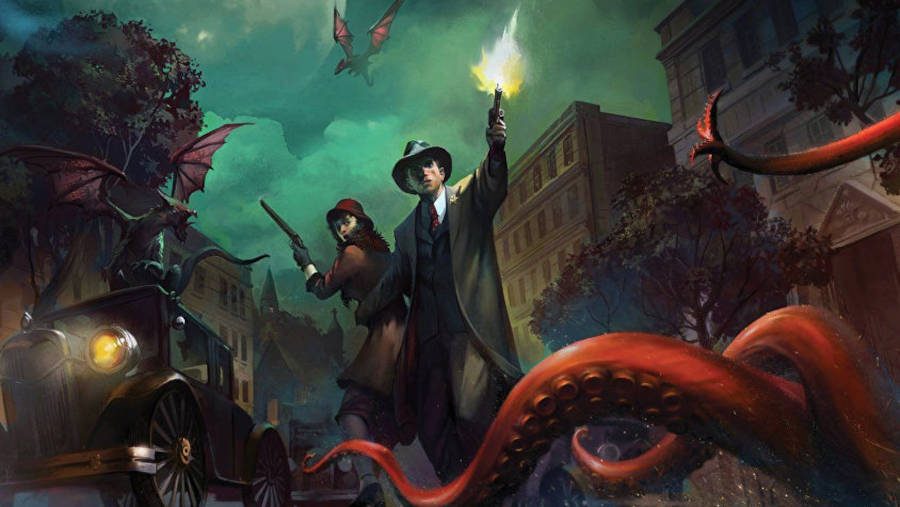 Arkham Horror, Eldritch Horror, Mansions of Madness: there are plenty of board games that allow you to live out the fantasy of being a hapless investigator about to blow their own brains out after seeing a weird fish. But you know what’s even cooler? A cooperative Living Card Game where you collect cards and adventure across card-driven RPG campaigns. So, you know, Arkham Horror: The Card Game.

This is an absolute slam dunk of a format for the newest iteration of Dark Heresy, Fantasy Flight’s Warhammer 40K RPG that places you in a motley crew of low-ranking, Inquisitorial acolytes. As an RPG, it never really blossomed ruleswise, and not everyone has the time to sink endless hours into a multi-scenario campaign.

Planned assault: Here are the best strategy board games

But a system that allows you to buy card packs for specific Inquisitorial acolytes, ‘deluxe expansions’ that take you on new investigations, and larger expansion packs that build up on all previous content could be a killer solution.

The gameplay of the Arkham Horror TCG is intricately brilliant and has won multiple awards. Fantasy Flight just needs the motivation to take us out of Arkham and transport us to the lower levels of a hive city. Sure, it lost the Warhammer license in 2016, but this could be a good chance to kiss and make up. 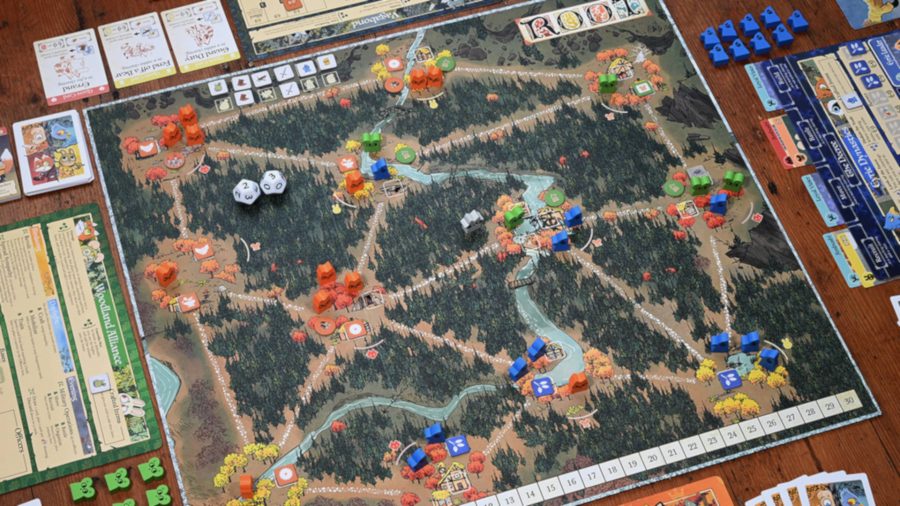 Root is a very special board game about fantasy forest critter kingdoms that absolutely abhors symmetry. Marquise de Cat starts in a very different position, and plays quite distinctly, to the Eyrie Dynasties. The Woodland Alliance, too, is unique when compared to either of them, and the Vagabond sports a totally bespoke playstyle.

Forget the gangs and their turf-wars, we’re talking about the real power players

My idea would be to set this in the most unlikely of places: Necromunda. Forget the gangs and their turf-wars, we’re talking about the real power players here: the Water Guild, The Redemptionists, Arbites – the lot. Any faction not well-represented in any of the larger Warhammer games can find its place in the fight for dominance of the Root of Underhive.

With victory conditions both generic and faction specific – and dominance cards that can entirely replace them – you can really get special with factions that play nothing alike. Famed Warhammer illustrator John Blanche is still around, too, so you could even commission fittingly freaky art. Now, who wants to play for the Corpse Guild? 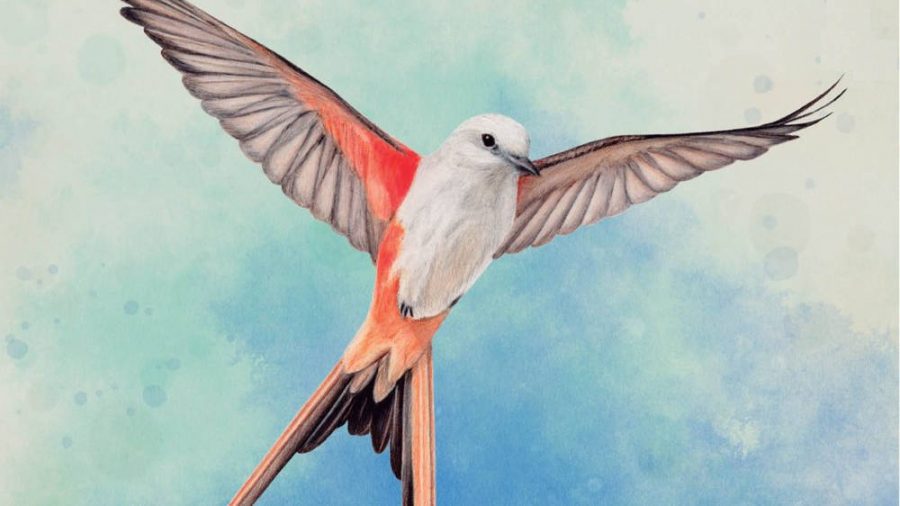 Wingspan is one of those highly-regarded games I have no intention of playing – unless they rename it Whiskerlength and make it about cats. I usually enjoy games that are less abstract and more violent, so the game equivalent of bird spotting is, unsurprisingly, not for me.

But it could be if it was about raising Squigs. Orks, the best alien faction in all Warhammer 40,000, sprout from spores, as do other critters that populate their ecology. Squigs are probably the most varied of the lot, covering everything that isn’t an Ork, Gretchin, or Grot. You have your regular Squigs – red, round, two legs, many teeth – monstrous Squiggoths, your even bigger Squiggoths, Hair Squigs, and more besides.

Two players: Check out the best couples’ board games

There are some 35 varieties of Squig (not counting Squiggoths), so boosting that number to match Wingpsan’s 200 birds would take some effort. But these are no longer the days of the stagnant corpse of 7th edition, and the stifling rule of Tom Kirby. We can let our Hair Squig loose, and let our Snakebite flag fly. At the very least, we can say that the Mohawk Squig is a different breed from the Ponytail Squig. 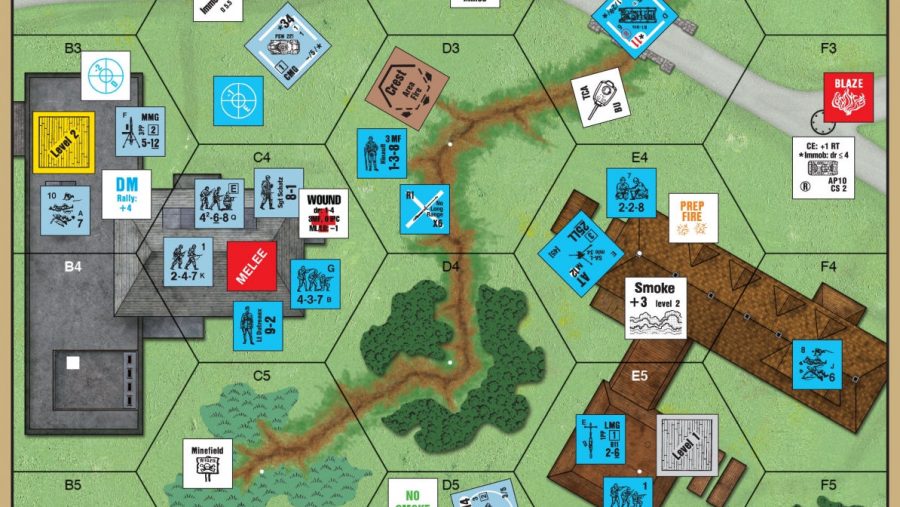 I recently looked at Rogue Trader, the first edition of Warhammer 40K, and found that there was a penalty for firing a weapon with the wrong hand. Advanced Squad Leader could well capture that level of insane detail. It has rules for weapon breakdown, and stuffs more information on a thumbnail-sized chit than is held in a passport.

So, what’s the smoke exponent for a Tactical Marine Combat Squad MMC? Beats me, I just want to collect a full Chapter of Space Marines without having to paint a thousand miniatures!

Never without something to say about Warhammer 40,000, Martynas's words have also appeared on PCGamesN, Strategy Gamer, and PC Invasion.