Magic: The Gathering has a huge crossover with Warhammer 40k on the horizon. Prior to this, the TCG‘s ‘Universes Beyond’ dabblings in other IPs have been mostly small-scale, limited to small bundles of cards in Secret Lairs. But the MTG Warhammer 40k Universes Beyond crossover is on a whole new level. It includes a full set of four, 100-card Commander decks, set in the far future dystopia of the Warhammer 40k universe. The four decks feature brand new cards with tasty Warhammer artwork and even some fresh mechanics.

Thanks to an announcement made on May 12 (which also had plenty to say about Dominaria United and Double Masters 2022) we now know precisely which factions will be featured in these Warhammer 40k Commander decks. While early artwork focused solely on the Space Marine boys in blue – fan-favourite Ultramarines – it’s now clear to see that the MTG Warhammer 40k Universes Beyond collaboration will run the gamut, featuring plenty of Xenos, Imperium, and Chaos representation.

Ahead of the release, we’ve collected everything that’s been shared about the MTG Warhammer 40k crossover so far, both the Commander decks and a series of three 40k-themed Secret Lairs that’s also upcoming.

Read on to find out what Warhammer 40k Magic cards look like, the date they’re releasing, and everything we know about the decks, the cards, and the mechanics they’ll use. Be sure to check back often, as we’ll update this page as soon as new information comes to light. 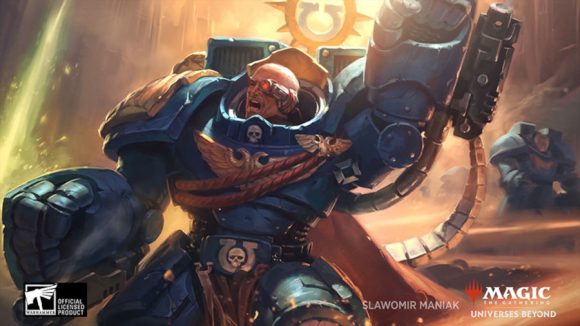 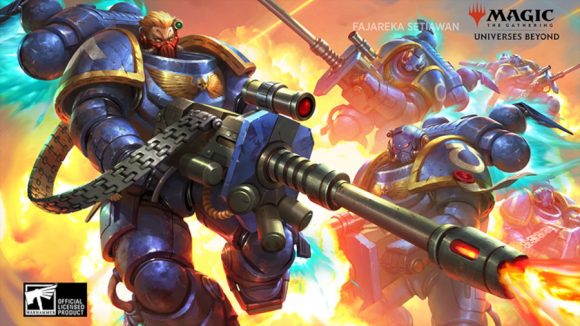 First off, we should start with the question on everyone’s lips. When is MTG Warhammer 40k Universes Beyond coming out?

Neatly sorted: All the MTG sets in order 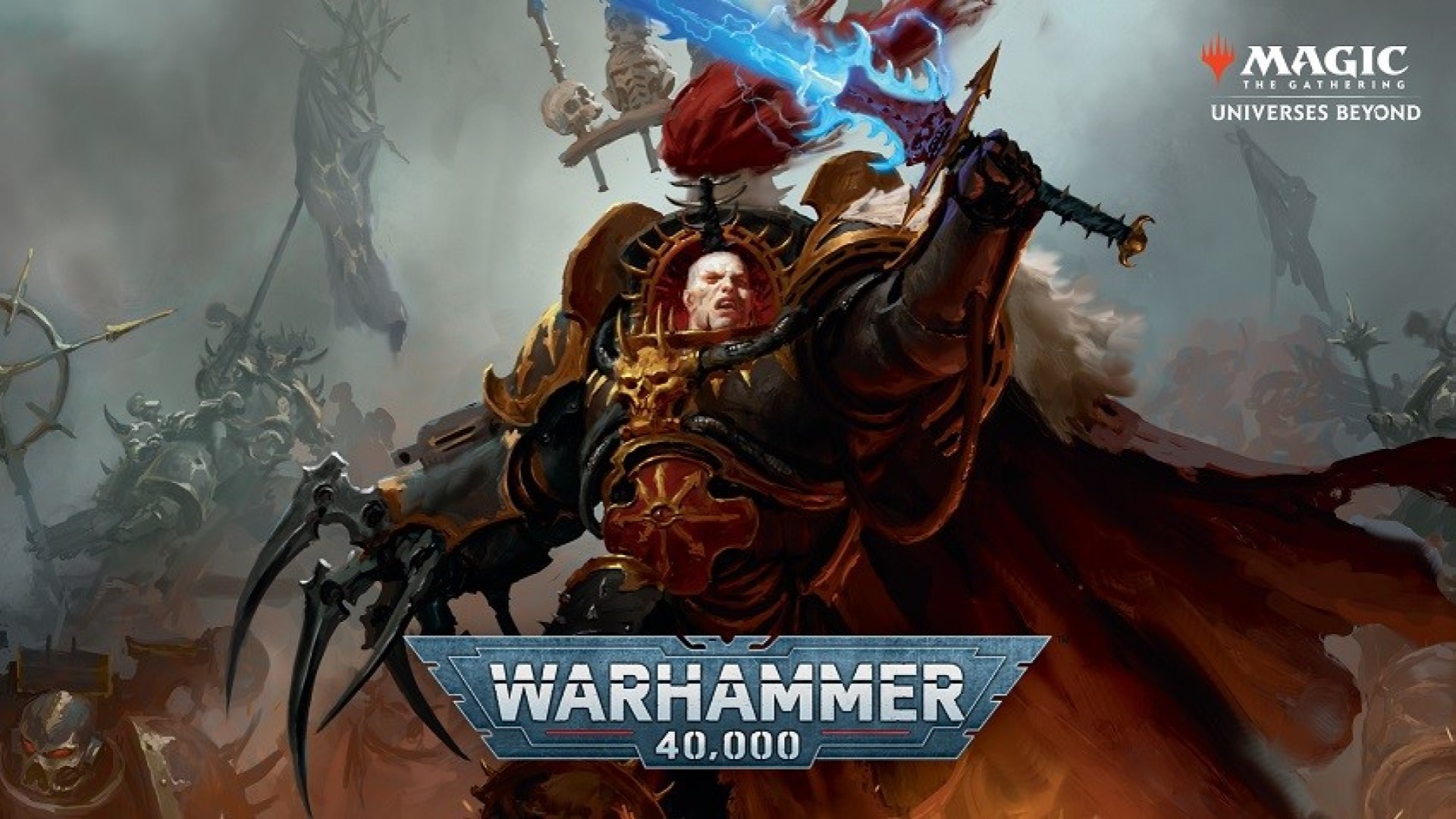 There are four Commander decks in the Warhammer 40k Universes Beyond release. They are:

The Xenos decks seem pretty straightforward – you’ve got the Necron and Tyranid armies, ready to devour and destroy. However, the human decks require a little more unpacking.

We can see that the Forces of the Imperium deck collates all the Imperium factions into one set of cards, and presumably the Space Marines, Imperial Guard, Adeptus Mechanicus and Sisters of Battle will each make an appearance. Similarly the factions of Chaos are combined in The Ruinous Powers deck, where we’ll hopefully see demons and Chaos Space Marines fighting side by side.

Interestingly, the set of four Warhammer 40k Commander decks is not colour balanced. It seems the 41st millennium has lots of Blue and Black, but not much White or Green mana to speak of. 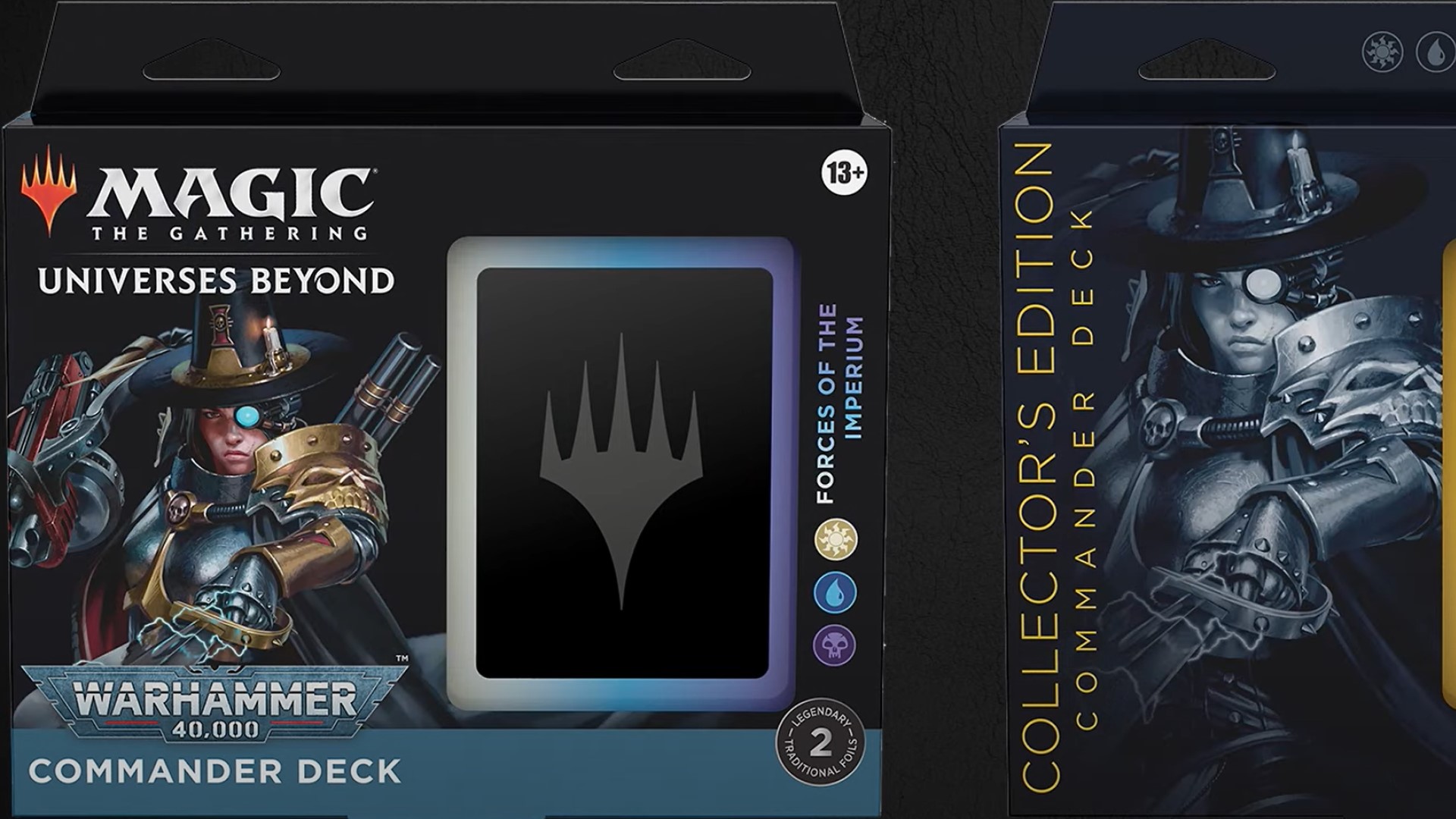 Wizards will be selling two versions of the Warhammer 40k Commander decks upon release. There’s the regular ones, which need no explanation, as well as Collector’s Editions, which come all dressed up in shiny foil. Apparently, they also feature a new kind of foil: ‘surge foil’. Right now, what surge foil is is anyone’s guess, but Wizards has promised pics, so we’ll soon see.

Besides the four Commander decks, there’ll also be three Warhammer Secret Lair drops released alongside them. These are:

As you can see, the Secret Lairs include one more Warhammer 40k faction – it seems like Orks just missed out on getting their own Commander deck – and two Secret Lairs from the other Warhammer properties, Blood Bowl and Warhammer: Age of Sigmar. Wizards has said the cards in the Warhammer Secret Lairs will be later be rethemed and reprinted in regular MTG sets. 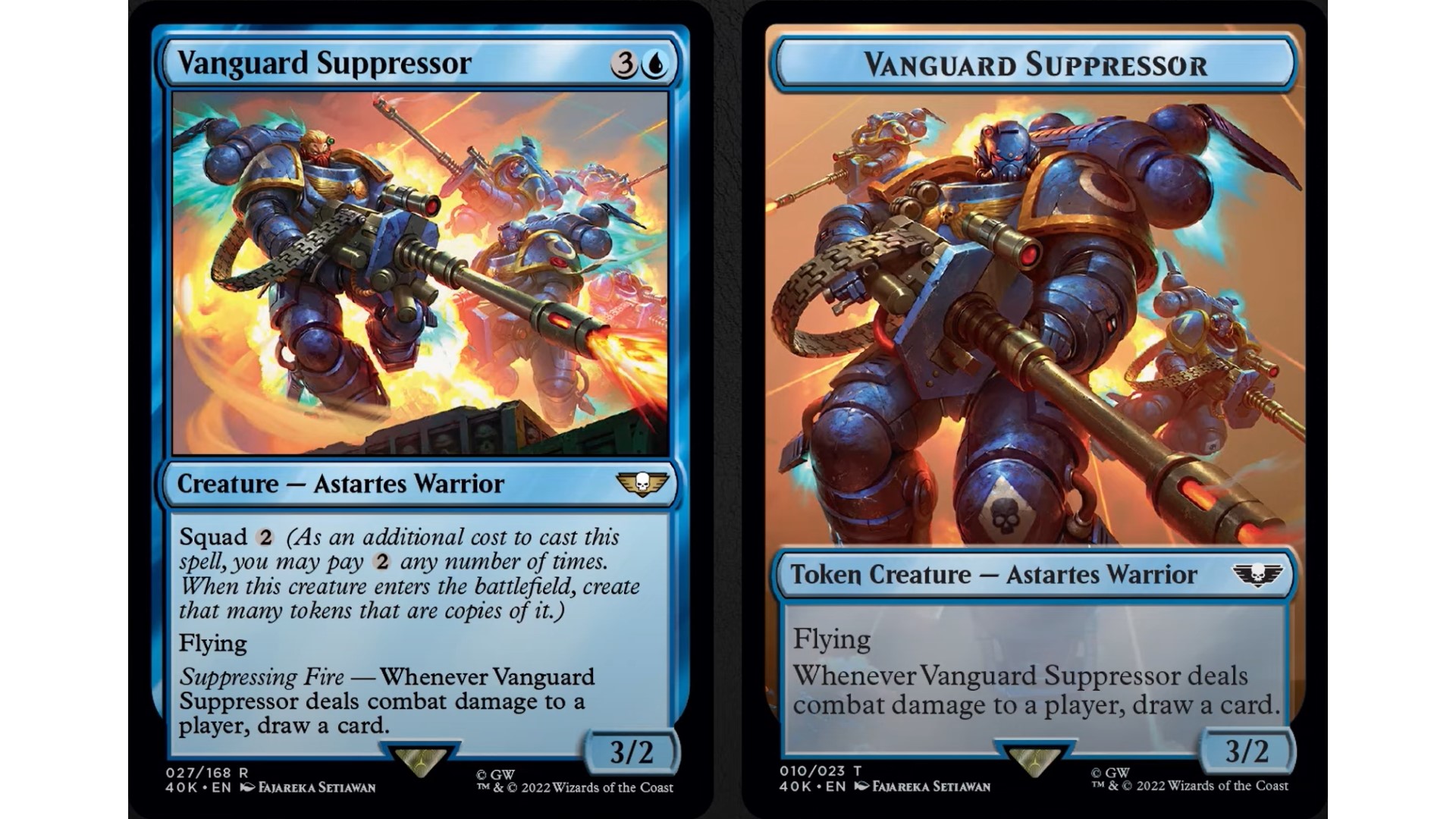 There’ll be more spoilers for the MTG Warhammer 40k cards to share once previews begin, on July 26. For now, though, a few cards have already been shown off.

The most exciting of these is Abaddon the Despoiler, the commander for The Ruinous Powers deck. He packs a punch, and also gives your spells Cascade, provided you can make your opponents lose life.

Blood for the Blood God is another card from the same deck, named after the catchphrase of the Chaos God Khorne’s followers. It’s sort of their scout motto. Anyhow, the card is pretty interesting, drawing a ton of cards and dealing a fair bit of damage, but massively overcosted unless you can make things die. Presumably, the Chaos deck will be quite good at that. 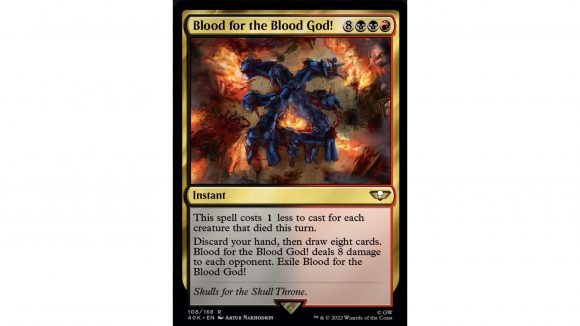 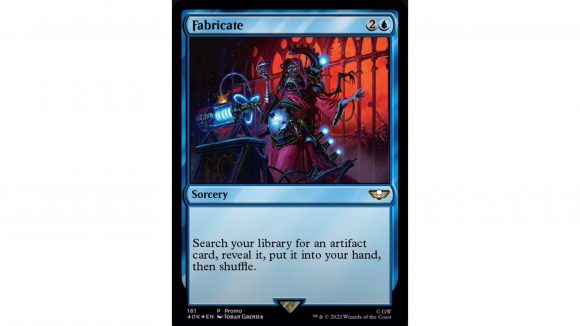 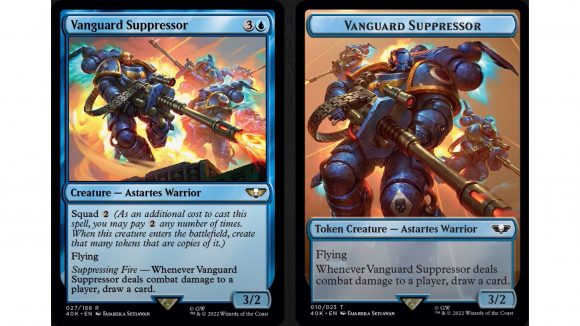 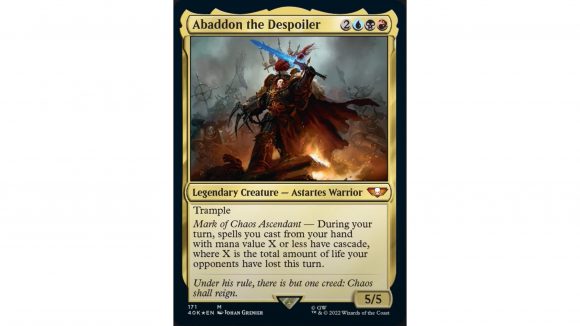 We’ve also seen Vanguard Suppressor, a Space Marine card from the Forces of the Imperium deck. This one seems pretty mighty. It draws cards whenever it deals damage, and when you cast it you can make as many copies of it as you want, provided you have enough mana.

Along with plenty of new cards, the crossover will include reprints of existing MTG cards with Warhammer 40k art and theming. One of these has been shown off so far, a reprint of Fabricate with art featuring Belisarius Cawl, Archmagos Dominus of the Adeptus Mechanicus. This copy of Fabricate is the promo card for the crossover. It won’t be in the Commander decks, but can be gotten from local game stores on launch day. That’s August 12, in case you’ve forgotten.