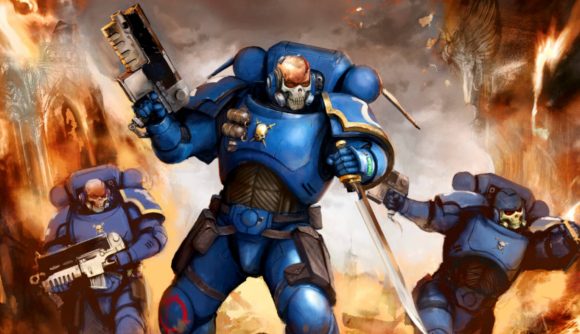 March 23, 2022 You can keep up with everything we know about the Warhammer set here

Several novelty Magic: The Gathering cards that are coming in the trading card game’s Universes Beyond crossover set will eventually be rethemed, and reprinted in mainline MTG set boosters, publisher Wizards of the Coast said in a blog post yesterday. Any ‘mechanically unique’ cards that appear in Universes Beyond Secret Lair boxes will later be reprinted with an MTG-appropraite artwork, so they thematically fit with the game’s existing Multiverse.

Announced back in February, Universes Beyond is an upcoming MTG crossover set, featuring the characters and worlds of several popular franchises, such as Warhammer 40k and The Lord of The Rings. As with recent MTG sets, some of its cards will release through premium Secret Lair boxes. But the most unique of these cards will re-release later, in a different form.

Wizards says all mechanically unique cards that are to be released in the Secret Lair Universes Beyond sets will later have their crossover theme stripped away, and reprinted with different art and names that fit in the Magic Multiverse. These ‘in-Magic’ versions will be included in MTG set boosters and added to ‘The List’ (a rotating supply of collectable cards). They will be reprinted approximately six months after their initial release in Secret Lair.

This retheming and reprinting is intended to cater to those players who aren’t keen on the crossover cards, and don’t fancy playing MTG using characters of other franchises. If you can’t stand the sight of a Space Marine, you can still get your hands on whatever novel keyword abilities it comes with through these re-Magicified releases.

Implementing something similar to this with The Walking Dead isn’t off the table in the future. We want to use this new Secret Lair drop as a way to gauge feedback, gather responses, listen, and see if that approach makes sense before diving in and making Magic-universe cards.

However, this applies only to upcoming cards in Secret Lair Universes Beyond boxes. Wizards says there are currently no plans to retheme The Walking Dead Secret Lair crossover cards that released last, but suggested this may change in the future.

“Implementing something similar to this with The Walking Dead isn’t off the table in the future,” tweeted the official Magic: The Gathering Twitter page.

“We want to use this new Secret Lair drop as a way to gauge feedback, gather responses, listen, and see if that approach makes sense before diving in and making Magic-universe cards,” it added.

Although no release date for the Universes Beyond Secret Lair box has been announced, Wizards says it will form part of a ‘superdrop’ that will span a full month.

Want to be prepared for grimdark MTG? Read our guide to building a Magic: The Gathering deck, or how to build a Commander deck if you want a change of formats.