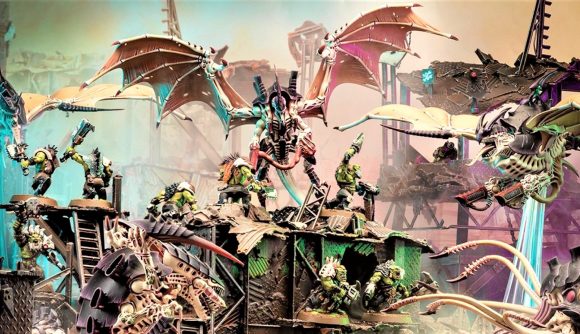 Warhammer 40k’s Tyranids are getting a batch of new rules in the upcoming War Zone Octarius supplement ‘Rising Tide’ (no release date yet), including new synapse-based aura abilities which can have their range extended indefinitely, Games Workshop revealed in a Warhammer Community article on Tuesday.

These new ‘Synaptic Link’ abilities function as optional upgrades for larger Tyranid units which generate synapse – such as Brood Lords, Hive Tyrants, and Neurothropes. You’ll purchase them with points when preparing your army (analogous to the Space Marines character upgrades like the Chief Apothecary), in order to grant continuous, powerful buffs to other ‘Nids within that unit’s 12” synapse range. GW has previewed two of these, which we’ll look at in detail below.

Especially exciting for Tyranid players, however, is that these new Synaptic Link buffs aren’t limited to the generating unit’s immediate 12” synapse range – but rather can chain up with another synapse creature’s 12” aura to provide the buff to all units in that big bug’s vicinity, too. And then another. And then another.

This means that, by maintaining careful spacing between your key synapse units, you could extend one of these Synaptic Link aura abilities to cover your entire Tyranid army. 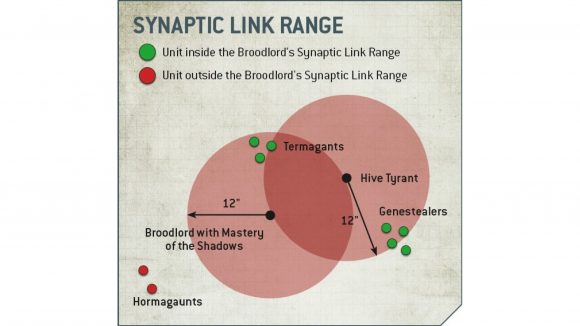 It’s potentially a very powerful strategy, which would bring careful tactical positioning much more to the forefront of Tyranids’ playstyle as a classic Warhammer 40k xenos faction. 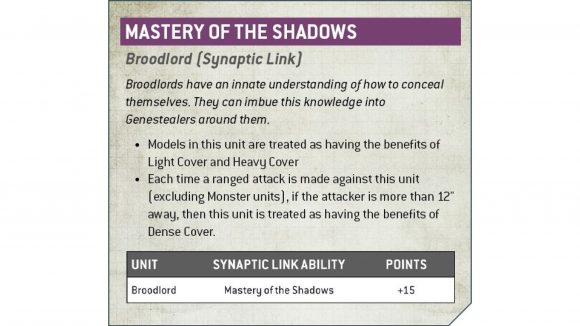 Of the two Synaptic Link auras GW has shown off, the Broodlord’s Mastery of the Shadows seems by far the more powerful, granting all Tyranids within the bubble bonuses to their armour saves for Light and Heavy Cover, as well as the benefit of Dense Cover (a -1 to hit them) from more than 12” away. That’s a phenomenal defensive buff, for just 15 points, that you can extend to every single unit you have. 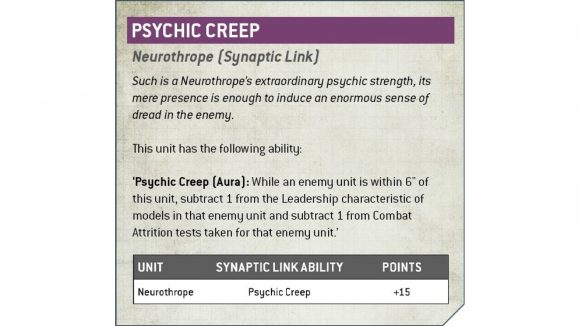 The Neurothrope’s Psychic Creep seems more situational, sapping the Leadership of nearby enemies and debuffing their Morale tests. Still, if you get your assault off just right, it could tip the scales enough to wipe out the pesky stragglers of a couple of enemy units, and break through their lines.

In their current rules (to be found in the 8th Edition codex and Psychic Awakening: Blood of Baal, since they don’t yet have a 9th Edition codex), the Tyranids’ trademark synapse mechanic – representing the Hive Mind’s psionic control over its swarms of smaller bugs – had played a lesser role, mainly limited to avoiding Morale Tests.

Tuesday’s article also promises that “many more Tyranid-flavoured goodies are hidden within the pages of War Zone Octarius – Book 1: Rising Tide”. ‘Nids players will no doubt be hoping what the book brings will be enough to tide them over until their codex finally arrives. 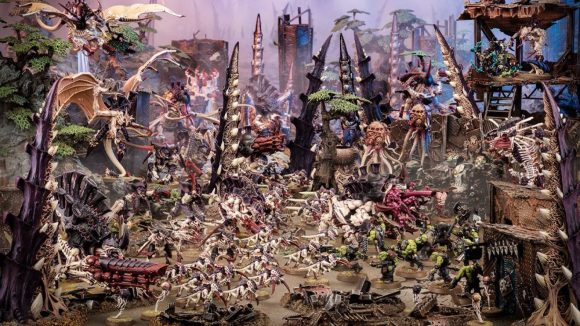 Tyranids feature heavily in the storyline of the current War Zone: Octarius narrative chapter in Warhammer 40k, which focuses on a sector of space where the Imperium accidentally fomented a massive war between Orks and Tyranids, that now threatens to spill over into the wider Galaxy.

The Orks are certainly getting their due from this release cycle, with the new Beast Snaggas box, new Boyz, new Kommandos in the Kill Team: Octarius box, and their codex finally arriving soon. How the Tyranids’ involvement will be reflected in GW’s new releases is less clear – although we know there is a Xenos codex coming in December. Could it be ‘Nids?

If you’re more into Greenskins than Gargoyles, check out our Kill Team: Octarius review for some gratuitous Ork-complimenting.