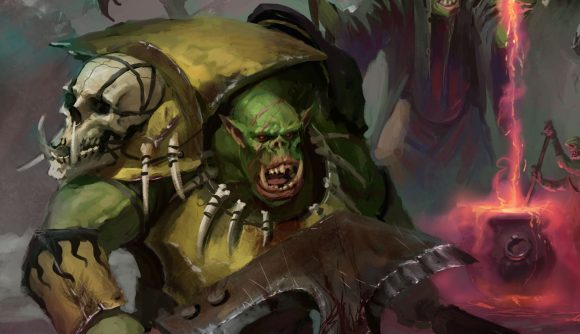 Warhammer Age of Sigmar: Soulbound, the tabletop RPG adaptation of Games Workshop’s fantasy miniatures game, will soon let you join the Waaagh! with its upcoming supplement Champions of Destruction. The book will introduce orruks, grots, troggoths and more as playable characters, alongside a host of additional player options and GM materials. Wargamer’s been given a sneak peek at its contents and an exclusive reveal of its cover art.

Champions of Destructions introduces options for roleplaying any of Age of Sigmar’s Grand Alliance of Destruction factions, from tiny grots to hulking ogors. Hobgrots, orruks, torggoths, and the recently introduced Kruleboyz are all included, too, so you can swear allegiance to Gorkamorka before following him on his rampage of anarchy.

Over 20 new character Archetypes (roughly equivalent to the character classes of other tabletop RPGs) are included, such as the Boingrot Bounder who rides a Squig into battle, the Weirdnob Shaman, the Ogor Firebelly that’s capable of burping flames, and the Kruleboy Gutrippa who was only recently introduced to the tabletop in Age of Sigmar’s third edition Dominion launch box.

Much like previous faction sourcebooks, Champions of Destruction also includes 70 new spells that replicate the Lores of Magic wielded by the Greenskins, alongside a bunch of new Talents, Miracles, and equipment with which to build your character.

On the GM side, the sourcebook contains an overview of the gods of Destruction, alongside details of how and why characters might form a Soulbound (an adventuring party) pledged to these deities. There’s a brief bestiary of squigs, gnoblars, and other creatures, too, as well as details for running a campaign built around Destruction-aligned characters.

Take a look at the book’s final cover art, presenting some of the new archetypes you’ll be able to roleplay in the game. 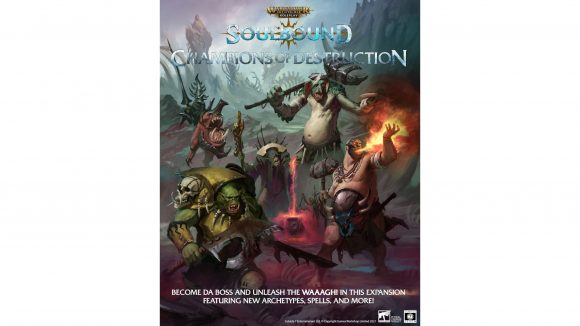 Released only last year, Age of Sigmar: Soulbound has already received a number of sourcebooks and adventure expansions, including the Champions of Death supplement that was released earlier this year. That sourcebook introduced the Nighthuant, Flesh-eater Courts, Soulblight Gravelords, and Ossiarch Bonereapers as playable characters. With the release of Champions of Destruction, there’ll only be the forces of Chaos left to add to the game as playable archetypes.

In our review of the Age of Sigmar: Soulbound starter set, we raved about its slick system and the ease with which it introduces the core mechanics of the game, not to mention its versatile beginner adventure.

Champions of Destruction is scheduled to release digitally in the first quarter of next year, with a physical release in the second or third quarter of 2022.

Warhammer Age of Sigmar: Soulbound and its sourcebooks are published by Cubicle 7 Entertainment, in cooperation with Games Workshop