Picking up a new tabletop roleplaying game is easy. Hundreds of the things release every month, and among the slew of independent productions and licensed publications, there’s bound to be at least one book, one rule system, or some piece of cover art that catches your eye. Something to suggest it stands apart from the rest, and will earn its place as your next tabletop obsession.

But actually starting a new TTRPG is a different matter entirely. Committing another system to memory, convincing your friends to play, learning its mechanics to sufficient depth that you don’t need to go thumbing through its rulebook every ten minutes because one player is trying to take an action that you’re sure the game’s designers never planned for. It’s hard work, and can all too frequently become a disheartening slog of rules refreshment than rousing reading.

Add to that an expansive body of lore, like that which Age of Sigmar has developed over the last few years, and the task of enticing players into a brand new TTRPG becomes a steep one.

But the Age of Sigmar: Soulbound Starter Set achieves this. Not only to great effect, but with remarkable ease. As narratively engaging as it is a useful resource, the Starter Set is beautifully equipped to ease new players into the game’s system, while introducing the all-too-frequently overwhelming Warhammer universe. As all the best starter sets do, it manages to enrapture players in a frenzied adventure, before offering new avenues for exploration – and leaving you wanting to dive into them, right away. 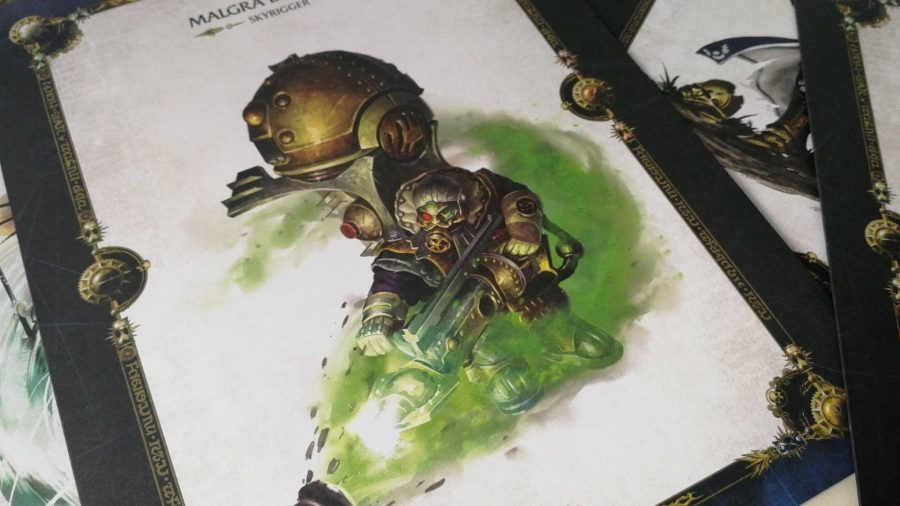 Released digitally last year, but now published as a physical boxed set, the Starter Set takes a familiar form. Its main component is a short tutorial adventure, designed to introduce players to the game’s rules, lore, and mechanical beats while they play. Accompanying it are five pre-generated character sheets, a slim sourcebook about the city of Brightspear (where the adventure takes place), three rules reference sheets, a double-sided map, and the small number of tokens and d6s you’ll need to play.

Your party is sent to rout the taint of Chaos

The main adventure, Faltering Light, assumes that both players and the Game Master (GM) have no knowledge of the Mortal Realms, or Soulbound’s rule system. It’ll take you through the cosmopolitan streets of Brightspear, introducing some of the many races and allegiances in Age of Sigmar, while hinting, but never enforcing upon you, the wider Godly affairs of the Mortal Realms.

An elite band of ‘Soulbound’ warriors, your party is sent to do the God-King Sigmar’s bidding, and rout the taint of Chaos that has infected the newly-won city of Brightspear. There’s a healthy collection of named characters and passing NPCs, as well as opportunities for further dialogue to explore their backstories and that of the city. 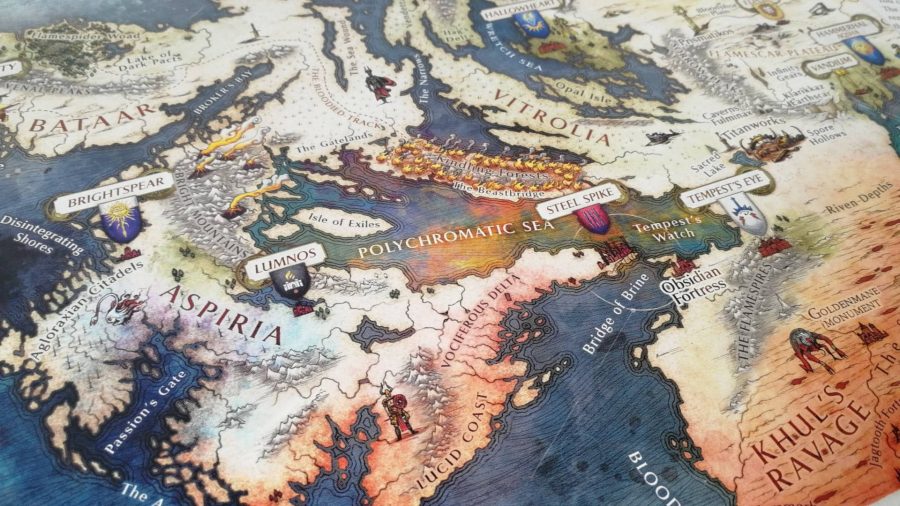 Combat takes precedent for most of the adventure, as is fitting for Soulbound’s focus on fighting, but the addition of a randomly determined ‘traitor’ in the story means the narrative is never far out of reach. As two-dimensional ‘good guys find the bad guys and kill them’ stories go, Faltering Light is as pleasant as you’re likely to get.

However, it’s not the narrative quality of Flattering Light that’s important, but its ease-of-play. The adventure does a remarkable job of gradually pacing the staple mechanics of Soulbound – sprinkling them as not to be overwhelming, nor too sparse, as to cause a lull in the adventure. The operation of Tests, Initiative, combat, and spellcasting are explained in concise, dedicated description boxes, and, in a pinch, a GM could reasonably rely on them during a live game if they’ve forgotten to brush up on the rules before starting. 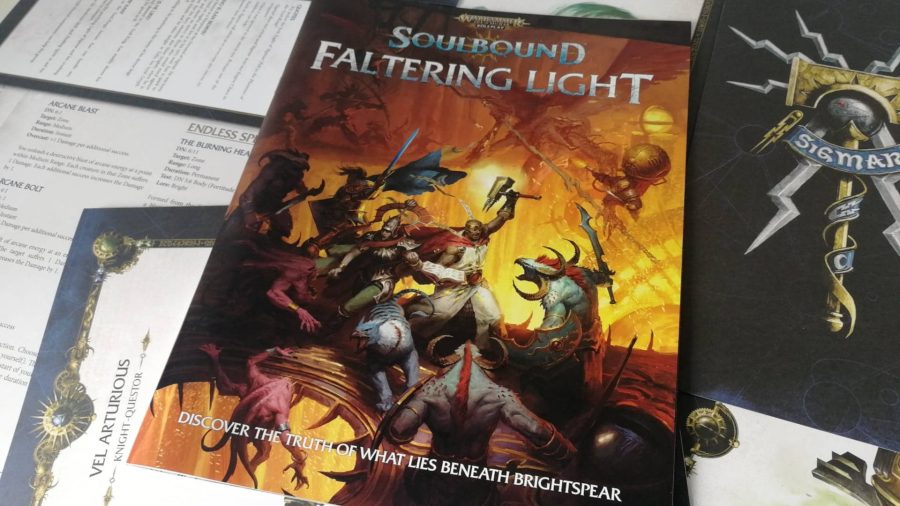 But the adventure also works as a fantastic jumping-off point for players totally new to TTRPGs. It well demonstrates the potential for creative roleplay, during segments of city exploration; the use of randomised encounters, as players explore the twisted tunnels of Chaos beneath the city; as well as a variety of combat scenarios, from arena battles to multi-zone skirmishes. Its gentle pacing introduces these elements gradually, while letting any astute GM understand the basics of plot rhythm and encounter difficulty.

The adventure works as a fantastic jumping-off point

It undoubtedly works so well, at least in part, because of Soulbound’s mechanical set-up. This is not a complex TTRPG. With three main stats, a combat system that operates on comparative tables, and character details that fit snuggly on a single page, its streamlined combat focus does favours for new players. But to wholly attribute the Starter Set’s quality to the simplicity of the game would be to do it a disservice. After all, it wouldn’t be the first time a tabletop game has confused players through its own convoluted presentation.

A niggle does creep in, however. Split into four chapters, Flattering Light is not an even adventure. The first chapter is entirely roleplay oriented, introducing the main characters and their surrounding setting. By the second, the party is making their way through a series of combat encounters in the underbelly of the city, and the fourth is devoted wholly to a boss fight. 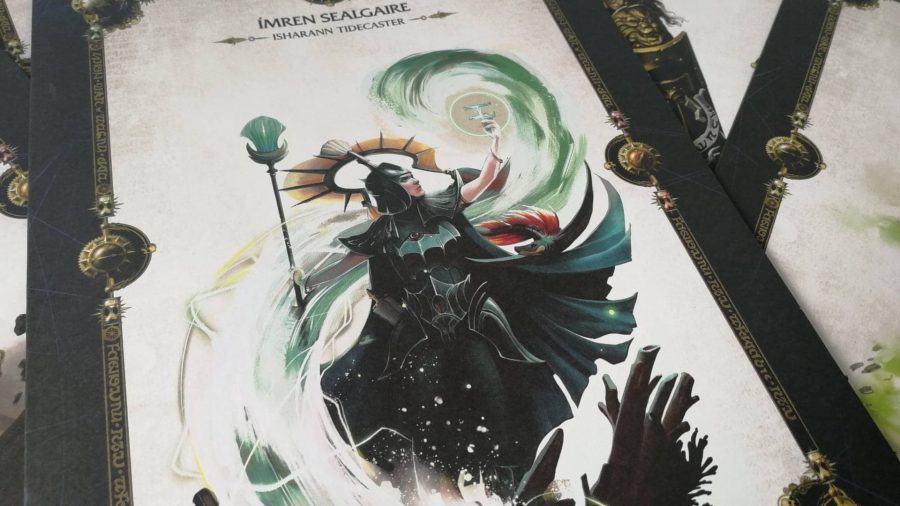 None are without moments of excitement or opportunities for expansion, but new GMs, unfamiliar with roleplaying beats, might struggle to serve an appropriate balance between roleplay and combat. Dedicating the first chapter to talking and exploration provides a welcome opportunity for new players to become comfortable with the basics of roleplay, as well as focus sincerely on the city of Brightspear. But to provide so few other opportunities for dedicated discussion feels like wasted effort.

And this feeds into a larger problem. While the starter set provides fantastic advice on playing Soulbound, it has little say on how to run an enjoyable game as a GM. Each encounter is concisely described, and much time spent explaining how to use the ‘traitor’ mechanic effectively. But there’s too little generic GMing advice, and scant attention paid to effective collective storytelling: how to balance reward with punishment, when to inject an adrenaline rush of excitement, how to foster contributions from quiet party members, or how to turn around accidental lulls. 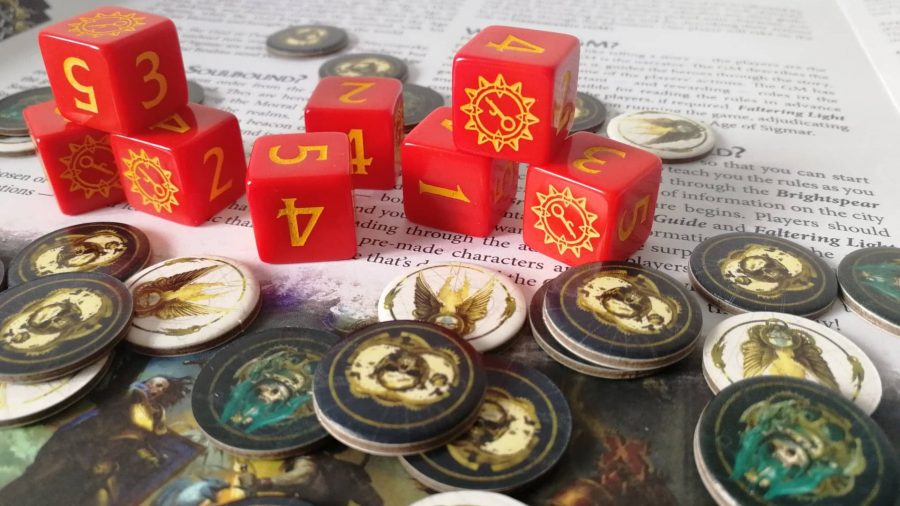 The mention of the importance of mutual respect, and acknowledging the emotional limits of each player is very much welcome. Those familiar with DMing (either from having done it before, or watching their pals) won’t struggle, but a brand new player, who has no TTRPG experience will likely feel lost if the party mood turns sour.

Lore isn’t explored for the sake of it

They won’t, however, feel lost in the Mortal Realms. Introducing a TTRPG’s lore is perhaps the biggest challenge of any starter set. Conveying the structures and characters of a dynamic world, in a way that both reflects its most engaging aspects, and can be easily grasped by new players is no easy task. And that’s doubly challenging with such a far-reaching universe as Age of Sigmar’s.

Grander in scope, and more mythological in practice than its Fantasy predecessor, Age of Sigmar’s intense blend of mythological navel-gazing and slightly silly, fantasy pastiche, is not easy to capture. There’s bounds of lore to move through, endless names to remember, and even the eight Mortal Realms, which form the basic building blocks of its universe, don’t roll off the tongue. 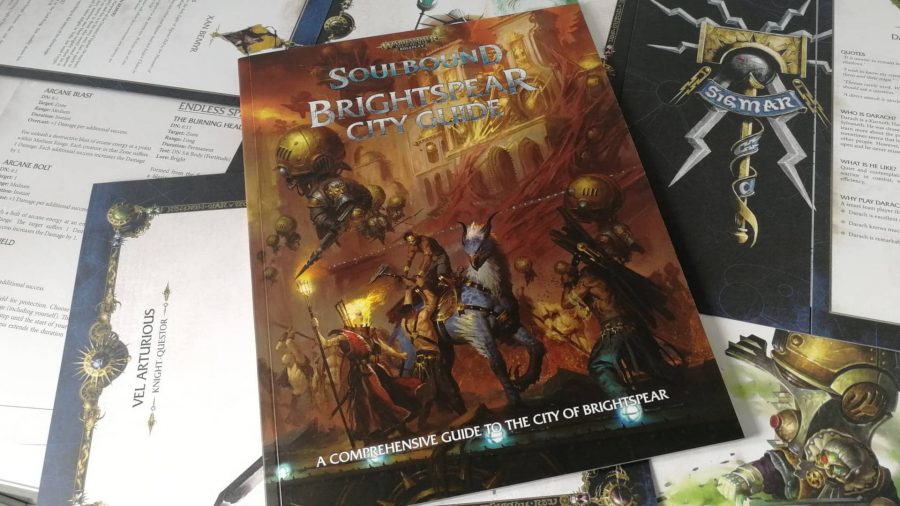 Soulbound’s Starter Set does a remarkable job of overcoming this by simply avoiding it. There’s a fast injection of lore at the beginning of the adventure, but only as much as is required to make sense of your party’s quest. Factions are introduced when necessary, and players on the cosmic stage are mentioned only in relation to the here-and-now. Lore isn’t explored for the sake of it, and you could easily enjoy the main adventure with only a superficial knowledge of the universe. It’s a refreshing take on a license that so often demands constant engagement by its fans.

Digital realm: These are the best Warhammer fantasy videogames

But the standout feature of the Soulbound Starter Set might be its pre-generated characters. As diverse in gameplay applicability as they are in physiological traits, each has a distinct role, but sufficient malleability for the player to seize as they see fit. 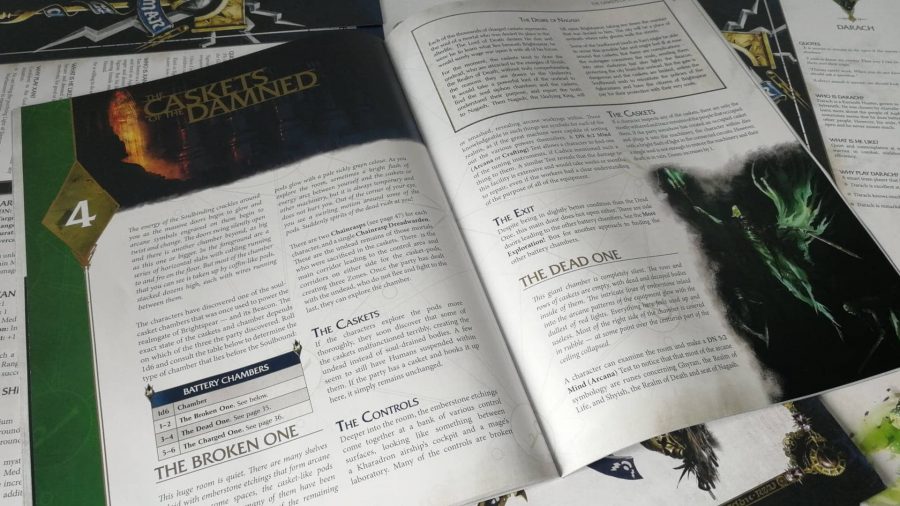 Each has a set of goals, secrets, and connections to other Soulbound in their party, making for some ripe confrontations as they progress through their adventure. Ímren Sealgaire is a stern, but self-anxious spellcasting Aelf, who secretly regrets joining the Soulbound. While Malgra Dainsson, a non-binary Duardin, is a ranged fighter, with a soft spot for the needy, but troubled by the secret Ímren thinks she has kept to herself.

Characters are simple enough to dive into after a quick scan

Like all the best pre-generated characters, they’re balanced, well-tailored to the given adventure, and provide as much scope for player input as you would like. They’re simple enough to dive into after a quick scan of the character sheet, but provide some personality twists that can be built upon. Seeds for specific roleplaying beats are planted, but how they’ll germinate, and where they’ll take the players when they do, is entirely up to you. Again, it’s the perfect basis for those totally new to TTRPGs. 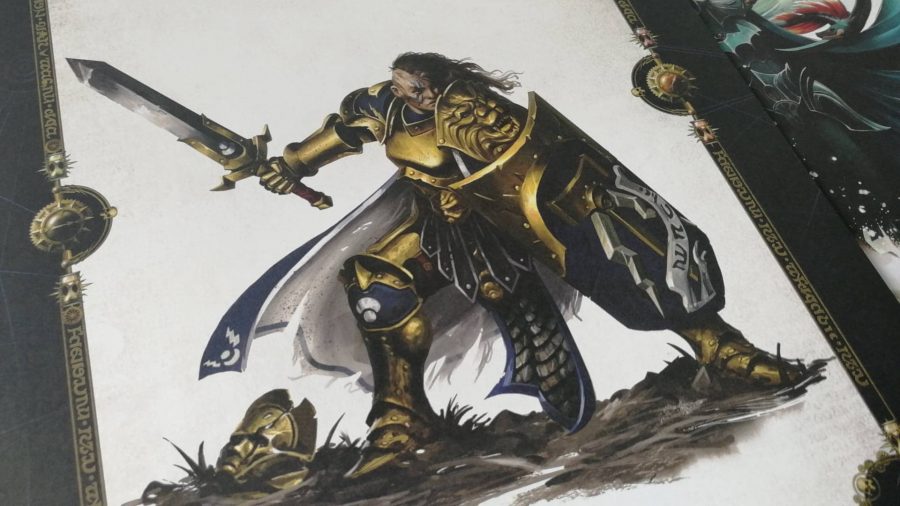 This Starter Set is very much set up to coincide with other, one-page adventures included in the accompanying Brightspear City Guide. Short adventure ideas, rather than plotted scenarios, they stem directly from Faltering Light’s conclusion, and introduce new enemies from a variety of Age of Sigmar’s factions: the Goomspitz Gits, Nighthaunt, Slaves to Darkness, Skaven, Scions of the Flame, and more.

There’s ample opportunity to extend your adventure in a new direction. And if the success of a Starter Set is measured by a player’s desire to keep playing, then all I need say is that I didn’t want to stop.