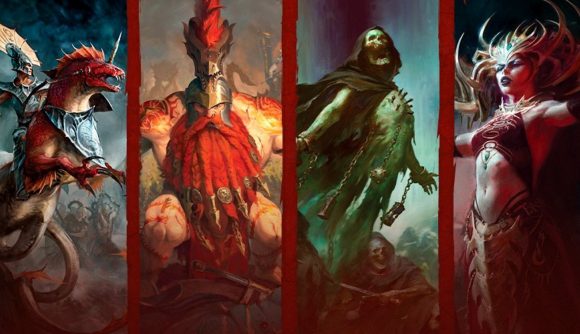 Games Workshop has lifted the curtain on its Battletome plans for Warhammer Age of Sigmar in the first half of 2022, revealing the first four factions lined up to receive a fresh book of new rules and lore. Announced in a Warhammer Community post on Monday, first up will be Order factions the Idoneth Deepkin and Fyreslayers, both receiving Battletomes in winter 2022 (presumably January or February).

After that, it’s Grand Alliance: Death’s turn – specifically the Nighthaunt – followed by more Order, with the Daughters of Khaine. Both these books will arrive in spring 2022. The Daughters of Khaine is the main surprise here, as they were one of the last factions to get a 2nd edition book, so it’s been less than a year since they had a Battletome release. These two are, however, the forces of the moment – starring as they do in the recently revealed Arena of Shades battlebox (release date as yet unknown).

As for the contents of these upcoming Battletomes, the Idoneth Deepkin and Fyreslayers will receive rules for the new Ahkelian Thrallmaster and Auric Flamekeeper heroes respectively, both teased earlier this month. They’ll also each get “personalised Path to Glory rules”, the Deepkin’s centred on soul raids and the Fyreslayers on taking mercenary contracts. Fewer details have been shared for The Daughters of Khaine and Nighthaunt books, but GW says both are “packed with new lore, rules, and warscrolls”.

GW also hinted at summer 2022 Battletome releases in its “roadmap” announcement, revealing that the fifth will be a Chaos faction and the sixth, one from Order. So far, both of these Grand Alliances have already had one 3rd edition book apiece: Maggotkin of Nurgle for Chaos, and Stormcast Eternals for Order. The new announcements narrow the pool a little further, but that still leaves six Chaos factions and five Order factions awaiting bookification, so it’s not a very hinty hint, really. It seems Destruction isn’t getting any Battletomes in the first half of  2022 – perhaps it’ll see more love in the second? 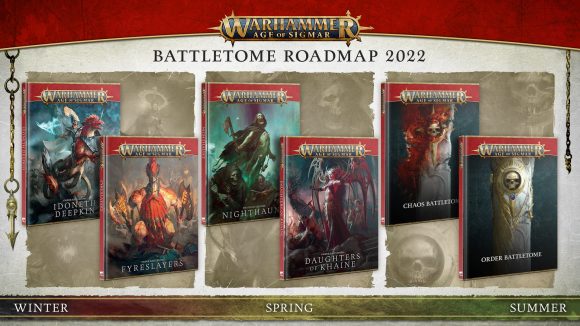 It’s clearly book week at Games Workshop, as the company also announced upcoming Codexes for Warhammer 40K on the same day. Next up for sci-fi Warhammer fans are the ravenous Tyranids and uppity Eldar.

Lost among all these fantastical factions? Check out our Age of Sigmar armies guide for more information. Or if you’re confused by all these spells and swords, and yearn for a nice, solid bolter in your hands, you could head over to our guide to Warhammer 40K’s factions. Chaos, Xenos, Imperium – take your pick.