Warhammer Age of Sigmar is a remarkable game. Its ruthlessly trimmed-down ruleset makes for a quicker, more fluid, and easier-to-learn full-scale wargame than most Games Workshop fare. Its vivid array of archetype-twisting, remixed factions, paired with a steady stream of stunning new plastic miniatures, makes it feel genuinely a breed apart from its Fantasy Battles predecessor, and sci-fi cousin Warhammer 40K. Honestly, there are countless reasons to get into Age of Sigmar – the more pertinent question is: how?

With 24 separate in-game factions (and another one, the Soulblight Gravelords, coming soon), it’s arguably harder than ever – as an outsider – to pick out a force to collect. How do you find an army that plays the way you want, before you’ve even had a go at the game, or got a feel for the basic rules and mechanics?

Luckily, unlike the bad old days of ‘wallet-busting megabox or nothing at all’, Games Workshop now answers this question with a range of surprisingly good-value starter sets for both Age of Sigmar and Warhammer 40K, in three delicious tiers, organised by how much cash you’re willing to splash.

Each of these boxes contains enough miniatures, dice, printed rules and assorted bits and bobs to crack it open and begin an honest-to-goodness game of Warhammer, with a minimum of faff and prep time. With one notable exception, the differences are mostly in just how tightly packed the box is with extra Stormcast Eternals and Nighthaunt miniatures, to make your early games bigger and meatier. 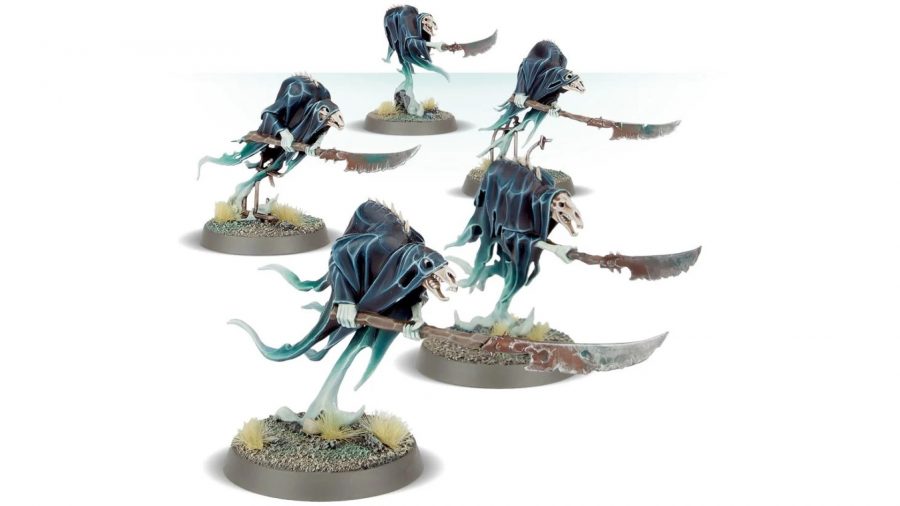 Even better news for the new hobbyist is that, thanks to GW’s improved production processes, all the models in these starter sets are ‘push-fit’ – i.e. they require no glue to put them together – and are made in dyed plastic rather than the standard grey, meaning they’ll have a little bit of personality on the tabletop, even if you haven’t yet shelled out for any paints, brushes, and associated hoohah. In a pinch, all you actually need to get this stuff game-ready is a common-or-garden craft knife. Handy!

There are three sets on offer, with different virtues and drawbacks

Let’s get to it, then – there are currently three Age of Sigmar starter sets available. We’ll run you through the contents of each, giving an idea of their overall virtues, limitations, and value for money, and suggest which sort of prospective AoS player might find each their best option.  We’ll also give a few pointers as to which reinforcements to pick up next, if you’re already looking to expand your Stormcast or Nighthaunt forces beyond your starter set’s offerings. 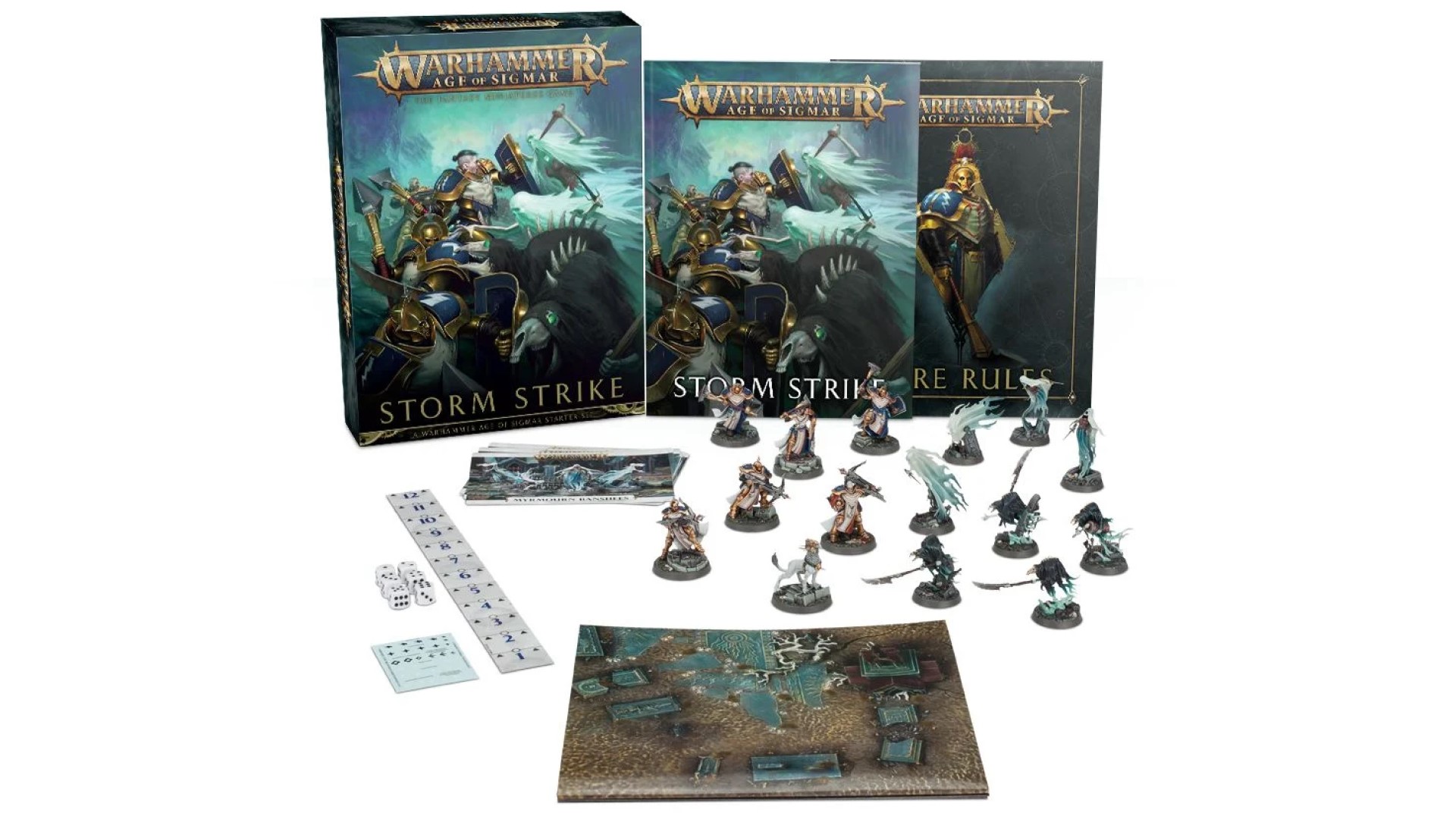 Here’s a breakdown of the miniatures:

This one’s good for one thing and one thing only: a low-risk miniature wargaming gift purchase. If you’re at all experienced with miniatures games already (or buying for someone who is) then start scrolling down, pal. There’s not enough here to whet your appetite.

But if you’ve an uninitiated mate, a youngster, or perhaps an unsuspecting partner, who you reckon might enjoy a spot of dice-rolling and plastic-soldier-pushing, this is a cheap, convenient little package that’ll let them jump into a (very small) game with the absolute minimum of fuss.

Forces of the Realms: Our guide to Age of Sigmar armies

With fewer than ten models on either side, it won’t take long to master how your couple of different unit types work, and rattle through some fast and furious games, across the mini tabletop battle mat provided. On the other hand, as the cheapest box overall, it doesn’t offer the best value for money in terms of miniatures, working out at $2.66 / £1.66 per model.

Although each side gets a couple of different model types, if you get hooked on the game, and want more, you’re going to bump up against the edges of this set pretty damn quickly. If that’s you, and you’re on the lookout for your next box of plastic excitement, there’s two broad ways to go here. 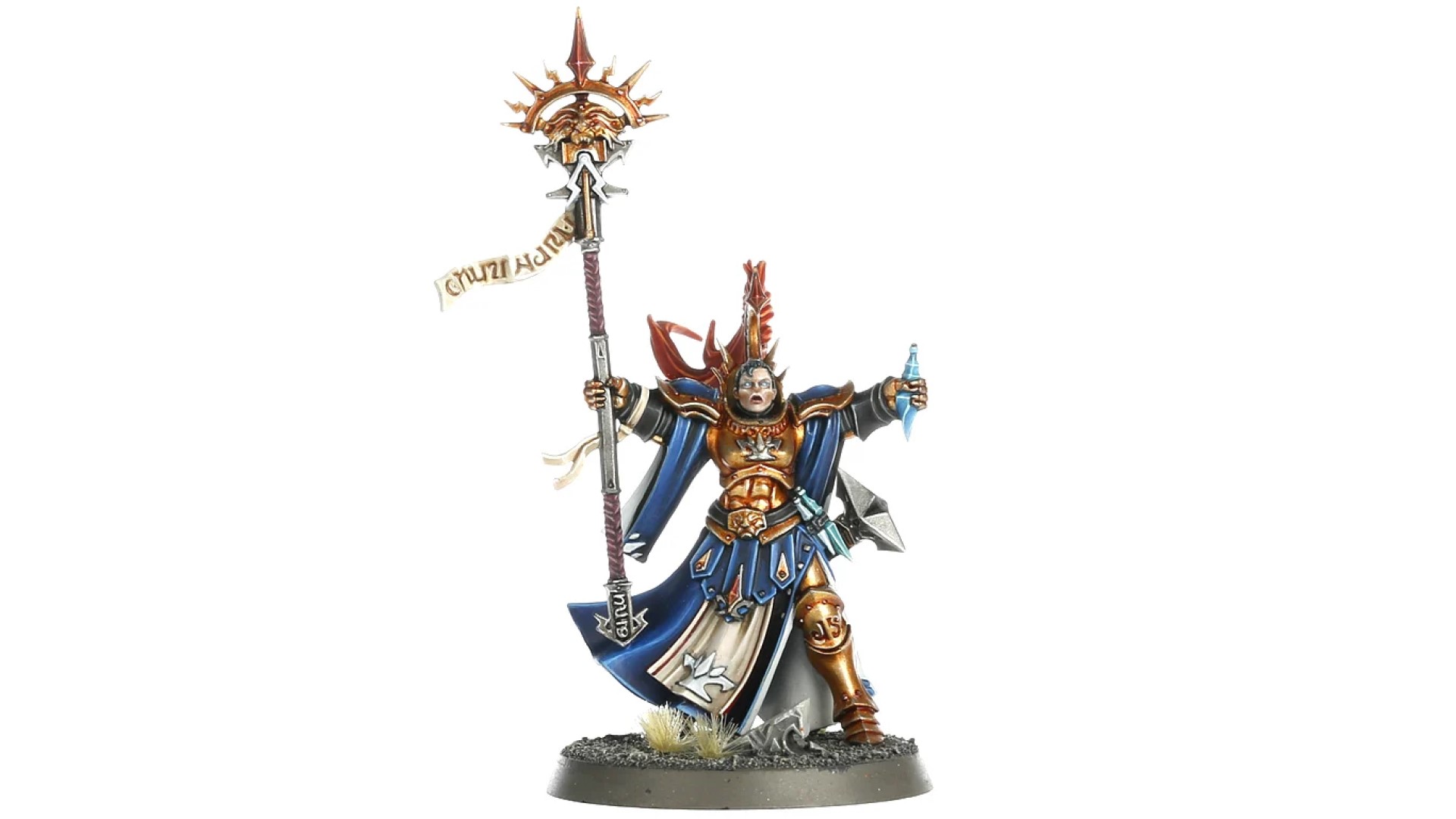 Option one: you could expand either of your fledgling forces with a couple of individual kits to beef up your games. In either case, you’ll want a leader and some more battleline troops; for Stormcast, you might try a Lord-Arcanum or Knight-Incantor, and some more Sequitors, while Nighthaunt players could easily opt for a Lord Executioner, and some Chainrasps.

Now you know the ropes, you could get cracking on an army of your choice

Option two: you could cut out the faff of picking out units specially, and simply invest in one of the other two starter sets, either of which will leave you with a decently sized, more varied army for each side, and potentially more goodies too (more on these below).

Either way is fine, and it’ll be up to your budget and preference which route you choose. Alternatively, now you know the ropes, you could go rogue, grab a Start Collecting box set and get cracking on your choice of the 22 other armies on offer! You do you. 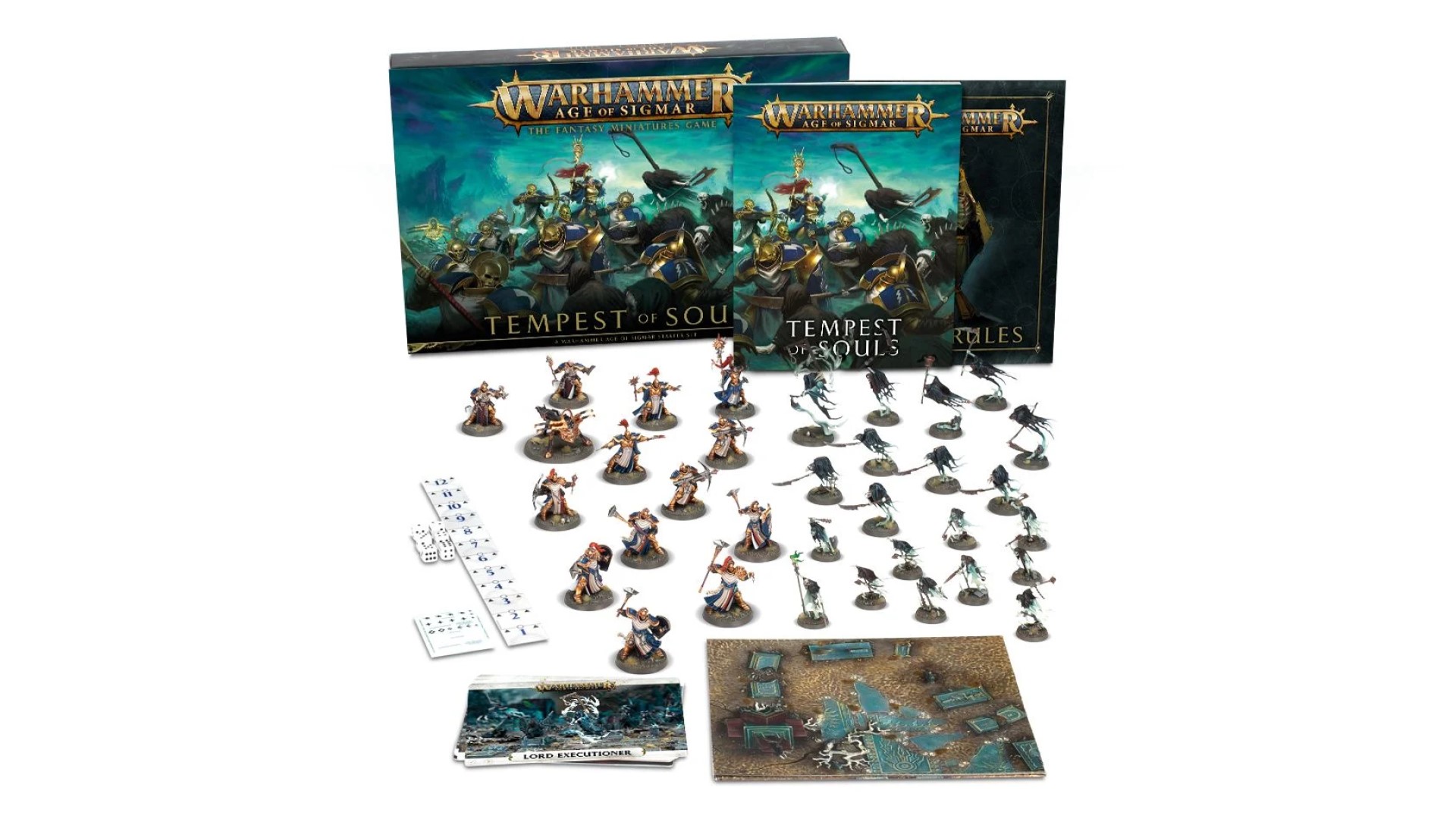 AGE OF SIGMAR: TEMPEST OF SOULS

Inside, you get the same general gubbins as in Storm Strike, with the main difference being the inclusion of twice as many minis – for a total of 32 miniatures (12 Stormcast, 20 Nighthaunt). There’re a few extra warscroll cards, and a few more pages of bumph in your extra guide booklet, too, but that’s not what you’re paying for here.
.
No, this upgraded set is mainly about allowing bigger and more varied forces on either side in your initial Age of Sigmar games – here are the models included:

The Tempest of Souls starter set has a lot to be said for it. Having multiple different unit types on each side adds serious gameplay variety compared to Storm Strike, and gets you closer to the scope and feel of full-size Age of Sigmar matches. The inclusion of a character unit to lead each force also teaches you the in-game role of your General, adding more strategic and narrative depth to your games.

It’s also at a sweet spot in terms of value for money, working out to $2.50 / £1.56 per model – although it’s important to remember that there are some probable ‘gap-filling’ costs involved. For example, since you’re only getting 2 Evocators, you’ll soon enough be looking to beef them up – and that’ll cost you a cool $60 / £35 for a five-model box. 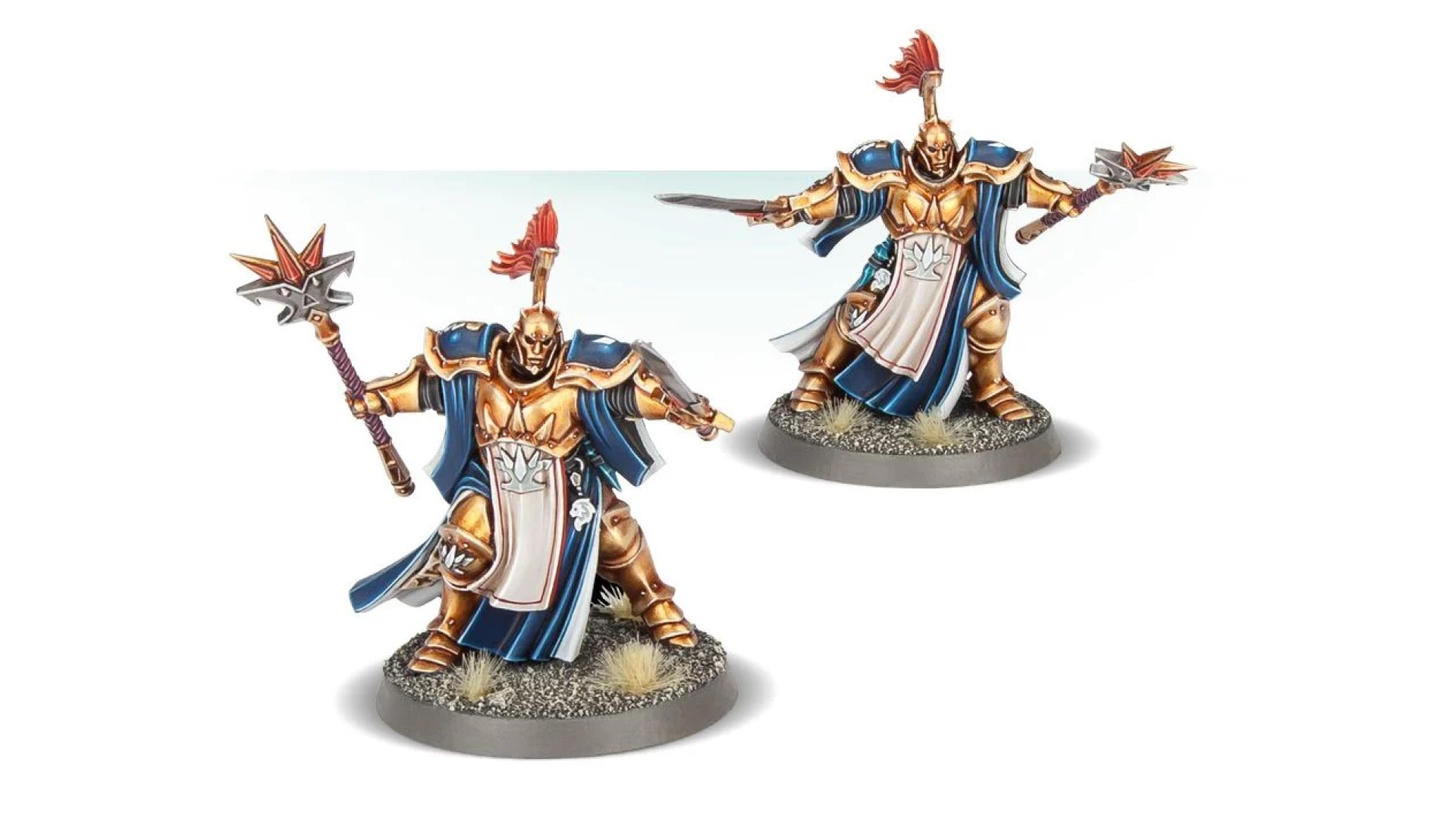 That said, this starter set has been consistently popular among existing players as a cost-effective way to boost their Stormcast and Nighthaunt forces, and it’s still a very strong option for any new player that’s confident they’ll play a good few games, and wants some proper variety – but doesn’t fancy paying a premium for a big old hardback rulebook they’ll probably never read.

This time, you get a basic army on both sides, but no frills

One popular route is to buy one Tempest of Souls box to begin with, then a second a little while down the line, buffing out your numbers (and most likely selling on the duplicate Knight Incantor and Lord Executioner, if you can’t find a use for them in your armies).

Instead of Storm Strike’s absolute bare minimum to allow the game to function, here you get a sensible, basic little army on each side, with clear routes to build out whichever of the two included factions you like best – but there are no extra frills; those are reserved for… 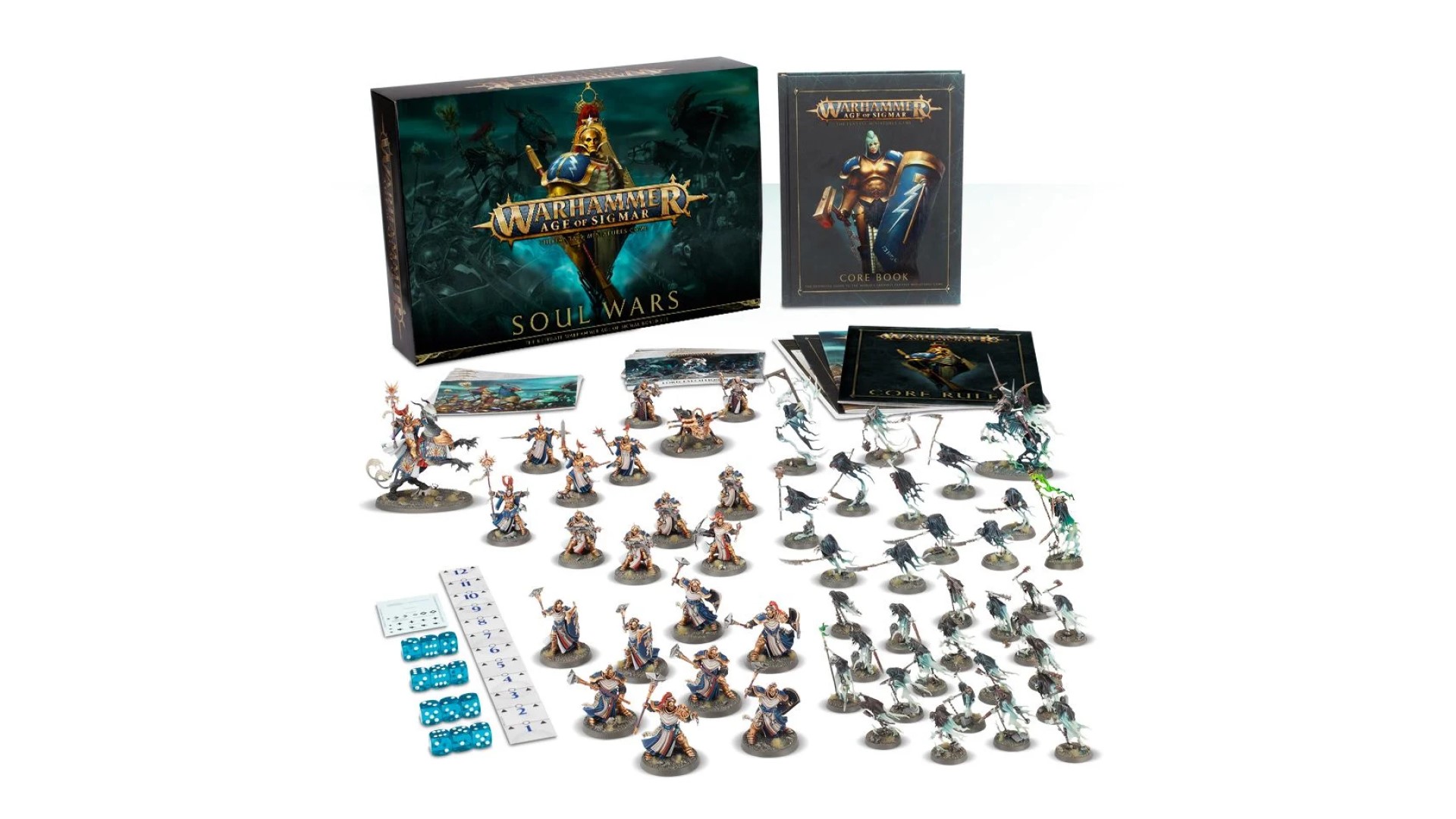 At $160 / £95, Soul Wars is your old-style, full-on, big-box starter set, with the generally welcome addition of a plush hardback rulebook right there in the box. The things they can do these days, eh?

This one contains six full units of Stormcast (19 models) and seven units of Nighthaunt (33 models) for a grand total of 52 miniatures. You get 13 warscrolls this time, to cover all those new units. Of course, you also still get all the ancillary nick-nacks included in the two lower level starter sets (except for the box that doubles as terrain, boo), plus extra benefits only afforded to the Soul Wars elite:

The main event is still the models, though, and this set includes the real deal; two filled-out starter forces that’ll have you playing full-size, full-length tabletop battles, with nothing snipped or truncated for lack of models or complexity. Here’s what you get in the big kahuna:

Despite being the most complete Age of Sigmar starter set you can get (and therefore popular, because for miniatures gamers, more is always better), Soul Wars is probably not the ideal way to go for most newbies to the game.

This hangs entirely on whether you want the core rulebook

The larger armies will undeniably make your initial games feel like more expansive and epic affairs – or, if you prefer, allow you to ‘slow grow’ your army, building your stack of miniatures bit by bit, as you play more games, extending the set’s longevity.

But, ultimately, you could get 23% more models for the same money by buying two Tempest of Souls boxes instead – and you’d still have everything you needed to play the game, in the way of rules and accoutrements. Heck, the core rules are even available free on the GW site, you don’t even need the booklet. 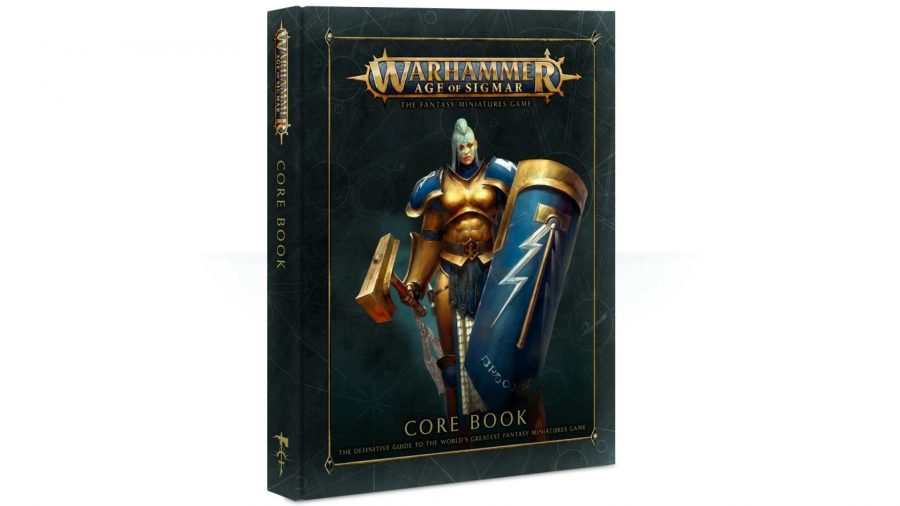 The price of this luxurious starter set is inflated by that lovely big book being baked in – working out to a hefty $3.07 / £1.83 per model – and so the question of whether this chonker is right for you comes down to whether you really want those glossy 320 pages in your life.

But if you could do without another heavy brick on your shelf, and would happily play from a rules booklet (or your phone) then this set really isn’t for you – in that case, we’d recommend going for a couple of Tempest of Souls starter sets instead.

Want a grounding in the Mortal Realms’ many playable factions before you venture to the tabletop? Check out our Age of Sigmar armies guide here.