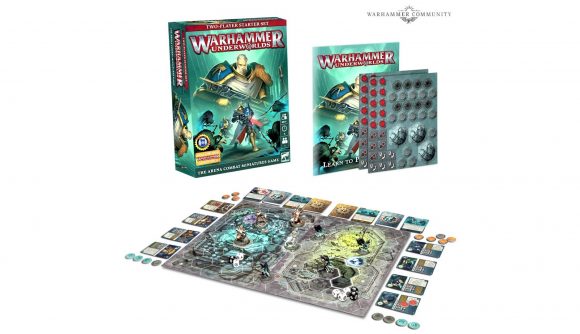 After nearly four years, four slightly confusing, seasonal ‘core sets’, and 28 different warbands, Games Workshop’s small-team competitive miniatures game Warhammer: Underworlds is finally getting a dedicated starter set next week. Revealed once and for all in a Warhammer Community post yesterday, it’ll go live for pre-order on Saturday, April 10, and releases a week later, on April 17.

The set contains the game’s basic materials (36-page rules booklet, hex-grid board, custom tokens, and dice), plus two warbands of push-fit miniatures (from the Stormcast Eternals and Nighthaunt factions), with pre-built card decks that GW says are especially tailored to fit a simple, beginner’s playstyle.

Instead of the usual custom mono-pose miniatures we’re used to from Underworlds, the two included warbands look to be simply re-labelled versions of existing Easy to Build kits: Castigators with Gryph-Hound (for the Stormcast) and Glaivewraith Stalkers (for the Nighthaunt). The warbands are named Storm of Celestus, and Drepur’s Wraithcreepers, though, respectively. We’d suspect this is meant to keep the starter set’s price point as low as possible – though we won’t see the final prices until it goes to pre-order on Saturday.

Since the game’s original, fairly noob-accessible Shadespire box was discontinued in 2019, and had most of its cards cycled out of competitive play, Underworlds has lacked an ‘all in’ starter set that focuses only on the basic, core rules. 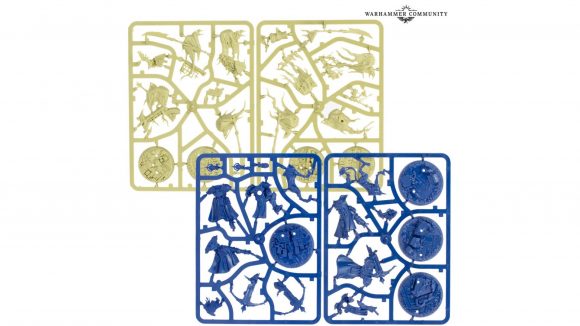 The subsequent core sets, named after the game’s competitive seasons (Nightvault, Beastgrave, and Direchasm) each added more rules and mechanics to the mix, which has made for a thriving competitive scene, but done little to ease in new players. GW will hope to assuage some of that gap with this new beginner-friendly option.

Warhammer Underworlds was launched in 2017 as a compact, competitive skirmish variant of Age of Sigmar. It’s since sold over 200,000 games, becoming a fully-fledged wargame series of its own – and spawning a surprisingly good PC adaptation in April 2020.

Fancy going a little deeper and darker with your fantasy miniature adventures? Check out our review of Warhammer Quest: Cursed City. Or, if you just prefer a simpler flavour of hex-based skirmishing, try out our Godtear review.