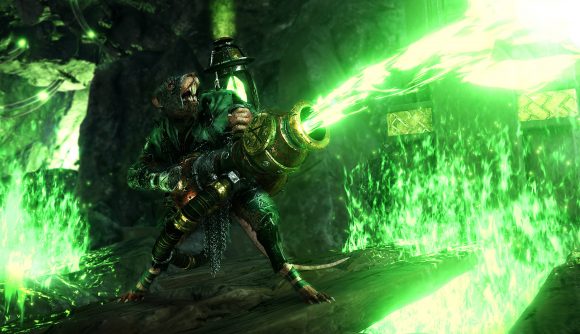 Games Workshop’s annual Skulls for the Skull Throne videogame showcase returns on June 3 in a Twitch livestream, it was announced in a Warhammer Community post yesterday. Renamed Skulls, the event will feature news and announcements about several upcoming Warhammer 40k and Age of Sigmar videogames, and run at 10am PDT / 1pm EDT / 6pm BST.

Although details about the forthcoming announcements are sparse, Games Workshop said the showcase will include premieres, previews, “details of special offers and free-to-keep videogames”, and new videogame announcements. We can also expect more content will be revealed for Warhammer fantasy brawler Vermintide 2, after a tweet teased the upcoming announcement yesterday.

Tweeted by the official Vermintide 2 Twitter account, a video snippet shows a humongous tree in a misty realm, while a voiceover speaks in the background. The video appears to show the Oak of Ages in the Wood Elves’ homeland, and speaks of a “goddess”, that might be the Wood Elf demi-god Ariel. Seems likely that the forested Elves will be coming to the game, potentially in a new DLC.

However, the game’s developer, Fatshark, is also currently bringing the Vermintide formula to the 41st Century, in upcoming co-op shooter Darktide. Slated to release this year, we’ve so far only had a teaser trailer for the game, but might be treated to another look at the upcoming videogame on June 3.

Something’s coming… tune in to the Warhammer Skulls Showcase on Thursday to find out how it ends.#Vermintide2 #Warhammerskulls pic.twitter.com/IKl6TWAKM3

Several other publishers and development studios will also be making an appearance during the livestream, including Total War developer Creative Assembly, which will likely reveal more details about its upcoming Total War: Warhammer 3 videogame, as will Warhammer 40k: Battlesector publisher Slitherine. Focus Home Interactive, publisher of recently-released Necromunda: Hired Gun and Storm Ground will also be there.

More peculiarly, a subsidiary of Frontier Development, developer of space flight sim Elite Dangerous, will also be taking to the virtual stage. Maybe this means we’ll soon be flying the ships of the Imperial Navy in a gorgeous, physically accurate flight sim? We’ll have to wait and see.

If the idea of transporting the world of Warhammer to the small screen sounds appealing, check out our guides to the best Warhammer fantasy and Warhammer 40k videogames, spanning multiple genres and platforms. Or, read our thoughts on a hands-on preview of Warhammer 40k: Battlsector.