A lot has changed in World of Tanks over the last few years, but the creativity and dedication of the game’s modding community have remained firmly fixed. There are hundreds, possibly thousands, of modifications available and many players swear them to be essential for the most engaging tanking experience.

You may have heard mention of the XVM mod or come across mysterious rumours of Aslain’s Modpack. We’re here to provide a guiding hand through the valley of endless mod possibilities and recommend the best options available. Some provide new crosshairs to optimise your combat aiming ability, others better simulate the deafening decibels of armoured warfare through audio packs, and plenty pitch themselves to stat fanatics – monitoring players’ win rates, damage output, and kill counts through personal performance recorders.

When it comes to downloading mods for World of Tanks, you have two options: individual mods, or mod packs that collate several (sometimes hundreds) of mods in one installation. Individual mods provide a great start, but mod packs dispense with the hassle of digging through file directories for each new modification. Grab a single mod if you’re certain that’s all you need, but otherwise, a mod pack will likely be your simplest path to a wider array of in-game experimentation options. With that in mind, we’ve divided our list into two sections – the best individual World of Tanks mods, and the best World of Tanks mod packs. Read whichever suits, or both!

As a final pointer: we recommend downloading mods through the World of Tanks Mod Hub when possible. The hub is managed by the World of Tanks’ developer, Wargaming, and all mods are checked for performance issues before listing, as well as certified compliant with Wargaming’s ‘FairPlay’ policy – giving a green light for their use in competitive matches. As always usual, mod with care and follow the installation instructions.

With those hatches now fastened, take a gander at our recommendations below and start optimising your vehicular warfare! 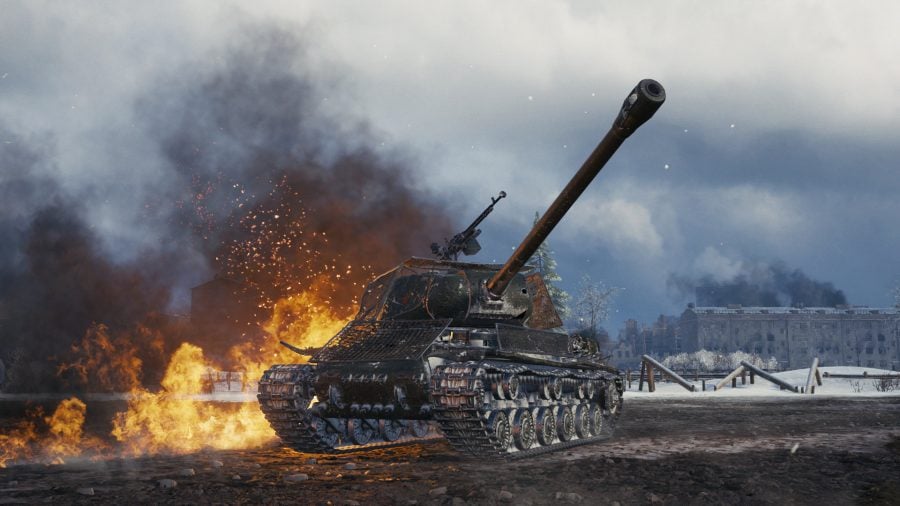 The best World of Tanks Mods

A staple in the World of Tanks modding community, XVM overhauls the dynamics, usability and visuals of your battle interface. That may sound dry, but make no mistake, XVM offers a powerful means of optimising World of Tanks’ vehicular combat to suit your playstyle. Virtually anything HUD-related can be customised: a damage log can be added to provide attack information in real-time, hit markers altered to give more informative stats, the minimap expanded in size, vehicle markers colourised, and masses more.

Optimise World of Tanks to suit your playstyle

But the primary draw of XVM is the detailed performance statistics it provides about friendly and enemy players. Their win rate, WN8 (skill rating; the higher, the better), number of battles played, and more are displayed in-game, providing a real-time heads-up on the challenges of the match. You may want to target the enemy’s biggest bully to show off your skill, or cosy up with a more experienced tanker on your team for covering fire. XVM is one of the most popular World of Tanks mods, and many players swear the tactical info it provides is essential for battlefield domination. 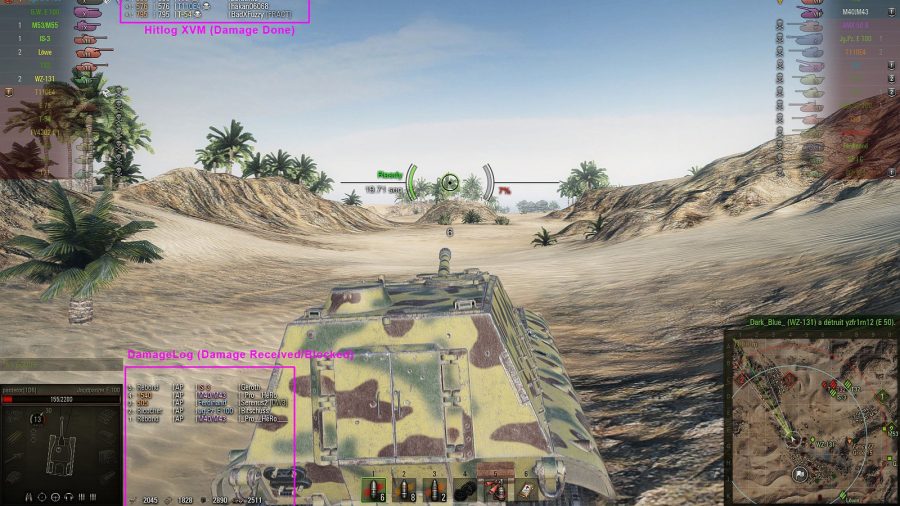 It can be difficult to keep track of the barrages of shells flying hither and thither across the battlefield. Did that shot hit the enemy? Did it pierce their armour? Should I fire again? Paint Ball Damage is a damage marker modification that helps alleviate these questions (yes, in exactly the way you’re imagining it would). Every fired shot is marked with a bright paint splatter, as if the tanks were firing paintballs at each other’s sides. A green splatter shows you’ve successfully pierced the enemy’s armour, while red means you’ve barely made a dent. No more wasting shells on non-penetrating fire – look for paint-covered portions of enemy tanks to target their weak spots.

Every shot is marked with a bright paint splatter

Paint Ball Damage provides useful information that remains (somewhat) visually in-keeping with the game. Ok, so it’s unlikely a Panzer IV would engage in paint-based warfare, but the damage markers are about as visually understated as they can be without defeating the object.

If you want to add a semblance of historical authenticity to your tank-toting, then the Guns and Engines Sounds Revival mod is perfect. The mod adds sound effects that better replicate the booming timbres and roaring engines of all your favourite armoured vehicles, manipulating sound effects to account for distance and echoes. Even if you’re not one to care for factual accuracy, adding weightier audio to your cannons is a simple way to energize your tanking and immerse yourself in battle. 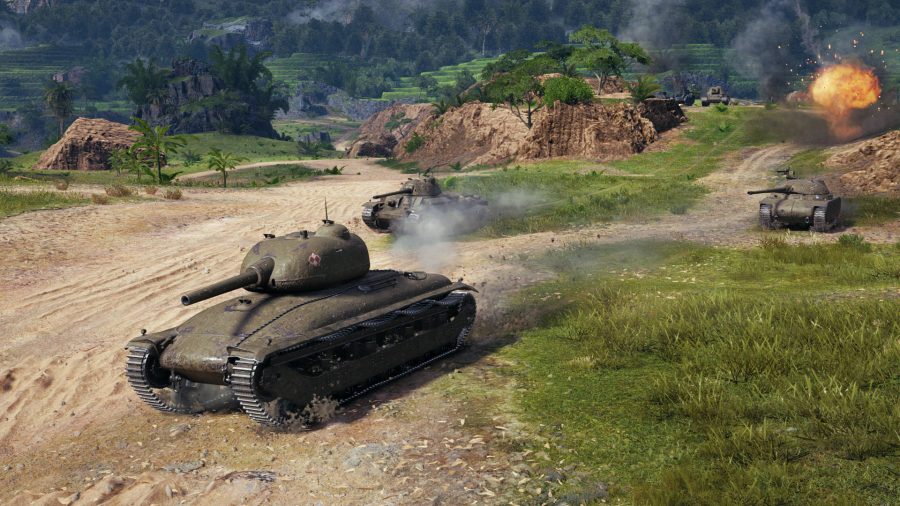 For many, the vanilla crosshair just doesn’t cut it. There are plenty of alternatives available, but we think this mod provides all the aesthetic customisability most players will need. Its four crosshair designs are simple yet varied, and eight colour options will suit any eye. You may prefer a pinprick reticle that takes up little screen space, or want additional scope details to line up the perfect shot. It retains an armour penetration indicator to help target enemy weak spots. Like with any crosshair mod, the change may appear jarring at first, but give it some time and you’ll soon adapt.

This World of Tanks mod is an absolute must for those with low-performing PCs. While the game looks glorious at its highest graphics setting, even the lowest setting can cause performance issues for players with dated hardware or non-gaming PCs.

Tom and Jerry: Read our guide to the best WW2 games

Using Config Tuner, World of Tanks’ most demanding graphical and audio effects can be disabled, and sound and assets reduced in quality, to boost performance. Give it a spin if you’re chasing maximum framerates on a struggling machine. 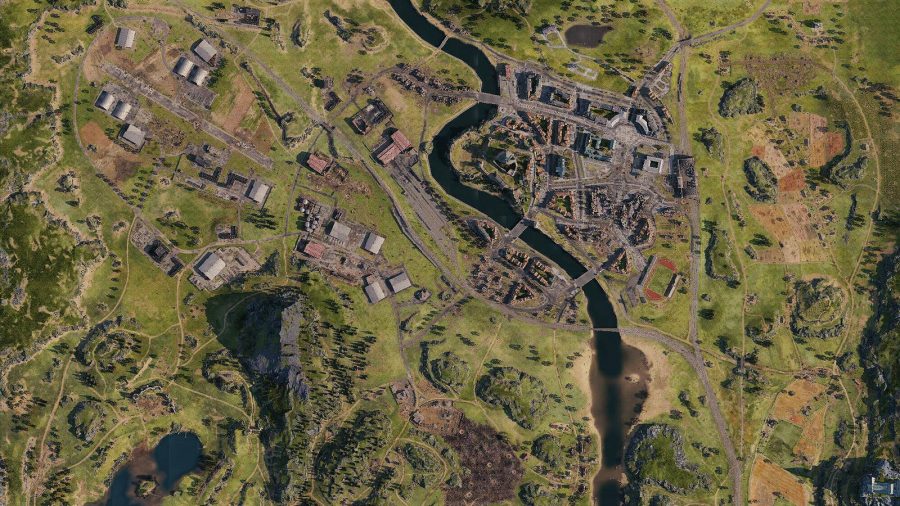 Next to the game’s HD visuals, World of Tanks’ minimaps can look a little standard. Their flat topographical detail and basic geometry don’t blend well with the shimmering armour or impressive explosions of the rest of the game.

This mod rectifies that, replacing all minimaps with HD versions. Images are sharper and more detailed, making it easier to read enemy movements and ping your team important locations. They also look a hell of a lot prettier. 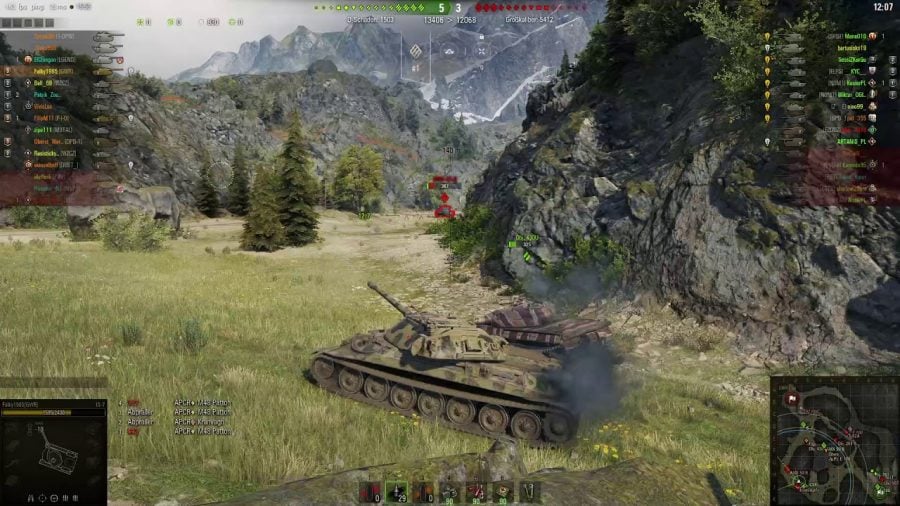 Of all the commander perks included in World of Tanks, ‘Sixth Sense’ stands among the most popular. When enabled, players are warned every time their vehicle is spotted by the enemy, with a lightbulb symbol flashing on-screen to mark their detection. Naturally, there’s a host of mods that replace the lightbulb with another, funnier, visual cue, but in our books, the best is this Sauron 6th sense mod.

The Old Man and the Sea: These are the best naval games

Each time you’re spotted, the Dark Lord of Mordor’s infamous lidless, flaming eye will pop on screen and his classic ‘I see you’ line play. Will it get very old, very fast? Maybe. But it’s a bit of fun. 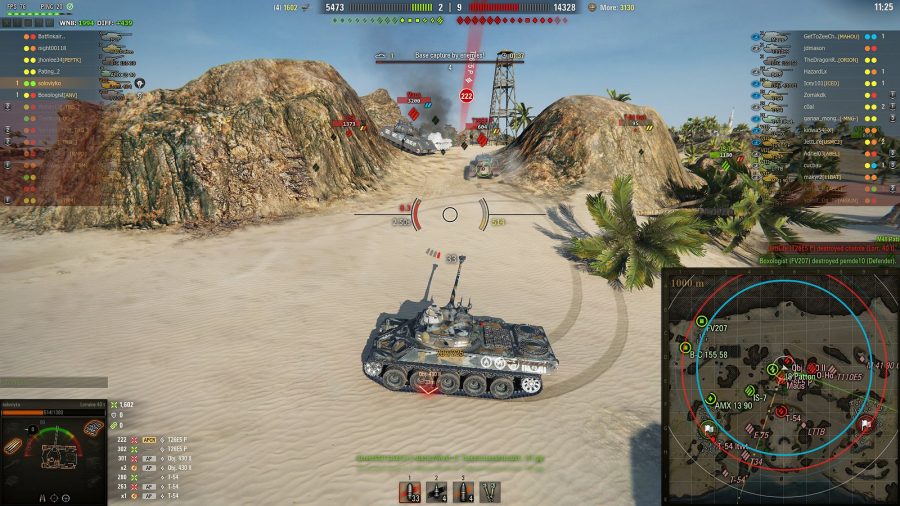 If you’re looking for a one-stop-shop for a huge selection of World of Tanks mods, then look no further than Aslain’s WoT Modpack. Collecting over 700 mods into one, easy-to-use installer, this mod pack is a gateway into experimenting with virtually any mod you hope to use in World of Tanks.

Preview panels provide a quick view of the mod in action, and frequent updates – which both fix bugs and add additional content to its ever-growing mod list – make this mod pack a fantastic source of all the mods you’ll likely need. The XVM mod mentioned above can be found in this mod pack, alongside other classics like J1mB0’s crosshair mod. Graphical performance, session statistics, sounds, textures, and minimap mods are all included, with bucketloads of options for each. There’s a reason Aslain’s modpack has earned such acclaim in the World of Tanks community. 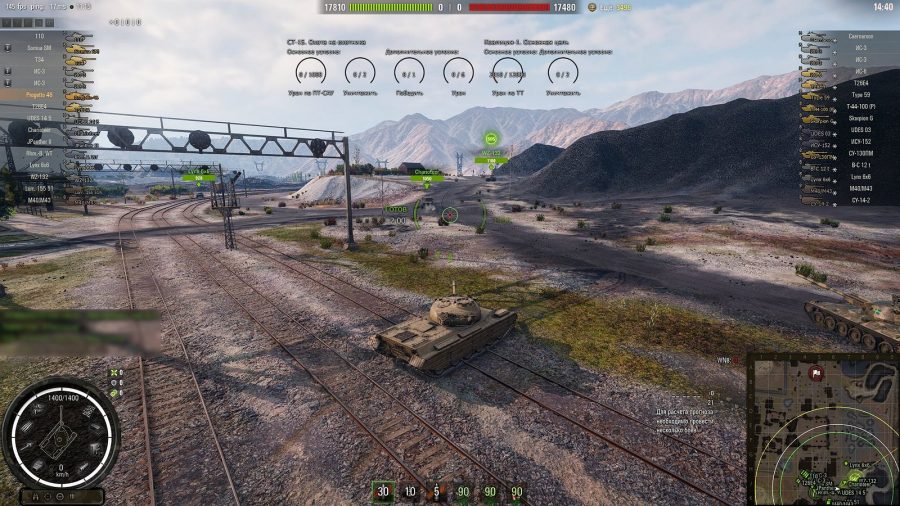 For those after a more streamlined modding experience, the 1D6 Xvm ModPack is the best bet. Offering only the essentials, this mod pack collates those mods likely to improve your tanking without bogging you – or your PC – down with unnecessary chaff.

The XVM mod is included, as are a couple of additional crosshairs and the contentious Zoom In/Out mod that extends your maximum ‘sniper mode’ zoom range. There are 15 mods in this collection that will streamline, but not upend, how you play the game. Check it out if you’re after only the essentials. 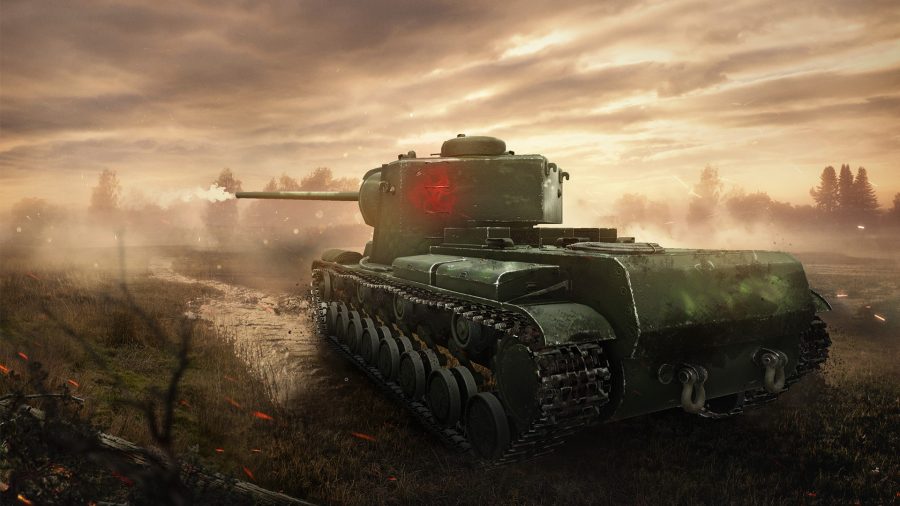 Another mod pack pitching to the ‘just give me the good stuff’ crowd, Solo’s ModPack aims to provide all the best World of Tanks mods in a single tidy package. A large collection of hit zone, interface, graphics, and crosshair mods are available to download from a minimalist installer in a jiffy.

Search and destroy: Check out the best Arma 3 mods

Solo’s Modpack sits as a nice midpoint between the mammoth collection of Aslain’s and the sparse but essential picks of the 1D6 XVM ModPack.

Give it a whirl if you’re up for experimentation, but still want a guiding hand. 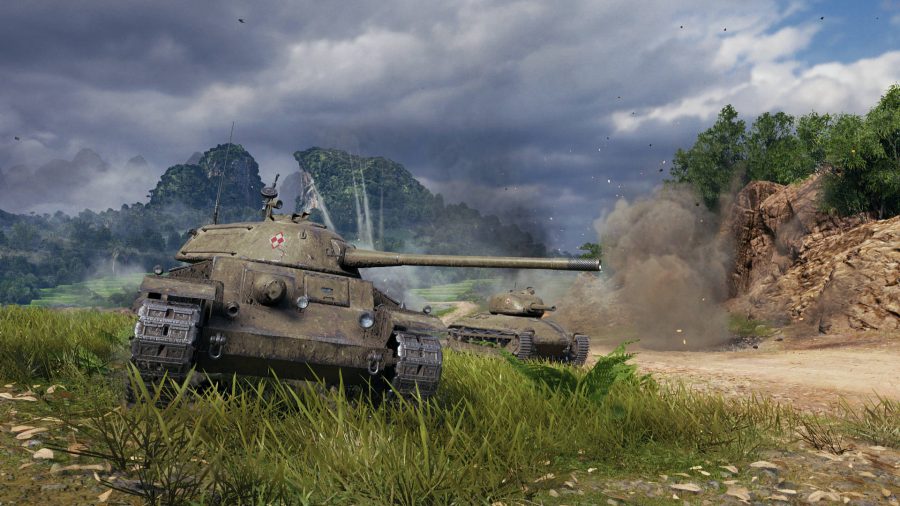 This mod pack offers a formidable collection of the most popular mods but cuts down on customisability in favour of usability. More space is given over to interface mods – like team HP bars or tank info panels – rather than an endless list of customisable crosshairs.

Oldskool’s ProMod also sells itself on compatibility across Windows operating systems, so it should suit those with older machines. 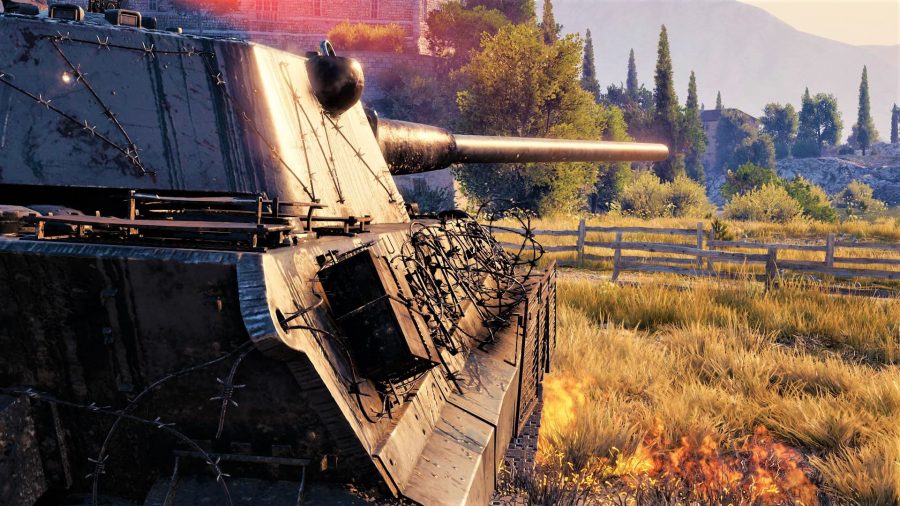 On the more official side of the World of Tanks modding community, we find WGMods Essentials. Compiled by the WGMods team (the people behind the official World of Tanks Mod Hub), this mod pack collects the most popular mods to provide everything you’ll likely need: zoom modifications, a replay manager, XVM stats, and hanger alterations.

Pro Patria Mori:  These are the best WW1 strategy games

With (sort of) official support behind it, the mod pack receives regular updates to keep its content compatible with the latest World of Tanks build. It’s designed to give you only the essentials, so will suit any new player testing the modding waters.