World of Warships is getting six new Italian Battleships in its latest update, together with a bucket of changes to several game modes. Landing on February 18, the new Tier IV–IX Battleships will be available to play in early access across live servers, launching alongside a new season of Ranked Battles and tweaks to Brawls.

Boasting semi-armour-piercing shells and reasonably high manoeuvrability, balanced by limited cannon range and low accuracy, Wargaming says the new Italian Battleships are well-suited to taking on weakly protected targets. They can also deploy the Exhaust Smoke Generator consumable to nip out of the fray when things get a little too hairy.

To get your hands on the battleships, you’ll first have to earn enough of the newly-introduced Italian Tokens, by completing chains of combat missions. Progressing through the missions will earn you enough tokens to obtain some of the new ships – including the Tier IV Dante Alighieri, Tier V Conte di Cavour, and tier VI Andrea Doria – with the tier VII Franceso Caracciolo your final reward. But to grab the biggest of them, the tier IX Lepanto, you’ll have to spend some doubloons on random bundles. 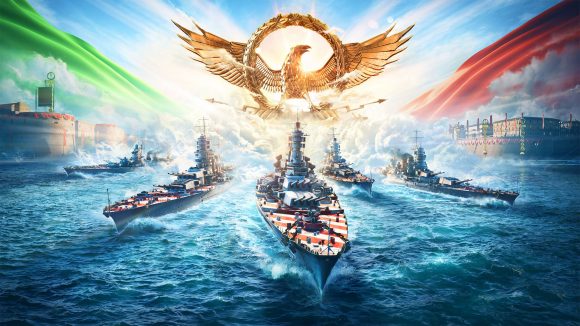 Wargaming has also announced the new Battleships will come alongside the second season of Ranked Battles. Taking on a different format than the first season, it will last twice as long, and increase the number of available Bronze and Silver Leagues to ten – from last season’s seven. The number of Stars required to qualify has increased, but expect to earn steel, doubloons, camouflages and more once you enter.

Brawls are also seeing a rework, and will now be labelled a separate battle type. They’ll feature smaller-team formats, and can now be played either solo, or as part of a division.

If you’re keen to jump into some tactical naval warfare but want an edge on the enemy, check out our guide to the best World of Warships mods.