World of Warships differs in many ways from its tank and warplane brethren. Slower, unforgiving, and more compact, the naval warfare battler places greater emphasis on tactical command of the battlefield than rollicking salvo action. But they all share one common feature – a massive selection of mods.

Some are purely aesthetic, offering stylised takes on the visuals and sound of the game to freshen up your seafaring. Others provide gameplay advantages, serving visual cues in combat or providing statistical information that will bolster your naval strategising. We’re here to guide you through the vast selection of World of Warships mods on offer, and provide our pick of the very best.

Before diving in, one final pointer: we recommend downloading mods through the World of Warships ModStation, when possible. Managed by Wargaming, the client provides a repository of the game’s best mods in a single, easy-to-navigate location, with no need to dig around copious file directories to install that new battlecruiser camouflage you’ve fallen in love with. Each mod comes with a convenient visual preview, newly installed mods overwrite redundant files, and the client keeps track of your modding history, so you can return to your favourite combo.

All but one of the mods in this list are available to download in World of Warships ModStation. If one takes your fancy, head over there right away and add it with a single click. But remember, approach modding with vigilance, lest you overburden your warship with flashy adjustments that leave it defunct and smouldering at the bottom of the ocean.

With those preliminaries cleared up, prepare to unmoor and up-anchor, as we explore how to optimise your naval warfare. 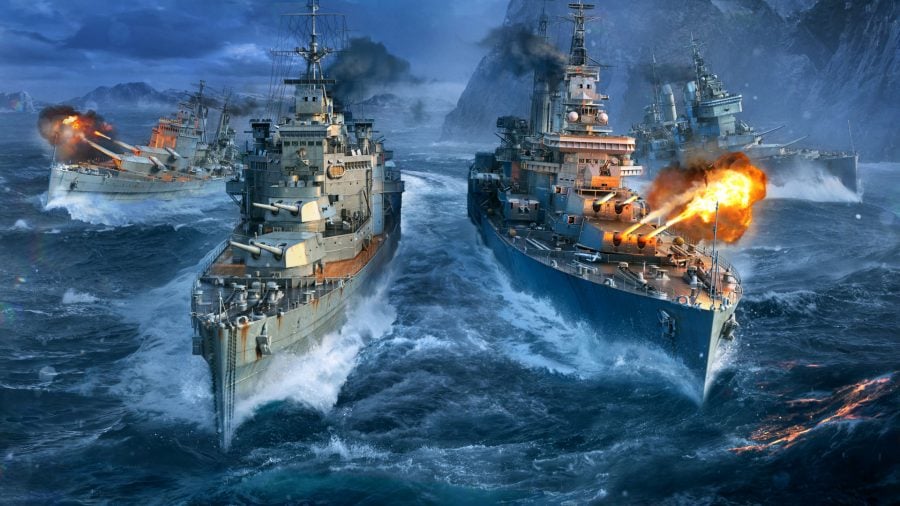 The best world of warships mods 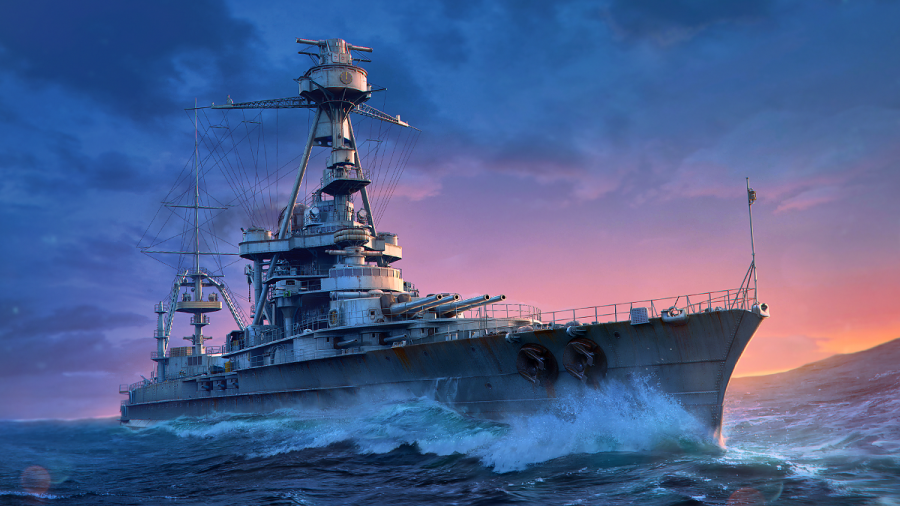 If you’ve any experience modding World of Tanks, the name Aslain will be very familiar. The voracious mod-collector has collated several hundred of World of Tanks’ hottest mods in an infamous mod pack, and is now bringing the same rigorous archiving to World of Warships.

A great pick for those keen on a little experimenting

Aslain’s World of Warships ModPack could reasonably be labelled the definitive mod collection. Assembling over 300 mods into a single installer, you’ll likely find any mod you could hope to use, or are interested in experimenting with, in this collection. From camouflages to shell-tracers, mini-map upgrades to texture packs, in-game voiceovers to user interface alterations, this mod pack is a gateway to discovery. Its installer is intuitive and presents an easy means of browsing the (very) long list, and a preview panel lets you glimpse the modifications in action before committing to installation. A great pick for those keen on a little experimentation and want to try a wealth of possibilities.

This is the only mod on listed here that isn’t available to download in Wargaming’s official ModStation client. Instead, grab it directly from Aslain’s website. 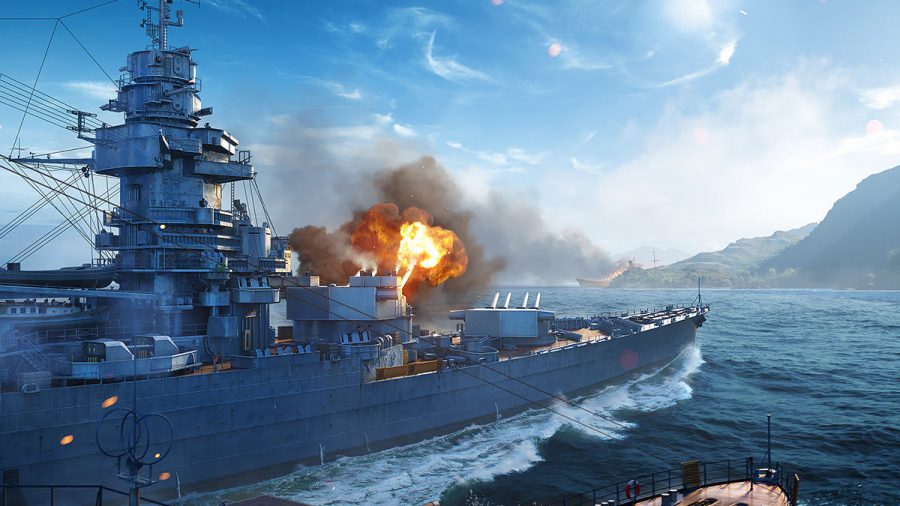 To defeat the enemy, you must know the enemy. To fully leverage the capabilities of your own ship, you’ll have to understand the operation of the vessels that face you – their combat capabilities, the manoeuvres they’re likely to perform, and how they could scupper your assault.

Tank-busting: Read our guide to the best World of Tanks mods

The Ship Info Panel mod provides combat information on target-locked enemy ships, including their maximum speed, reloading time, and main battery firing range, letting you exploit their weaknesses and press the attack, or make a quick getaway after realising the cannon on that dreadnought is a little beefier than expected. Not the most stylish mod, but many players think it essential. 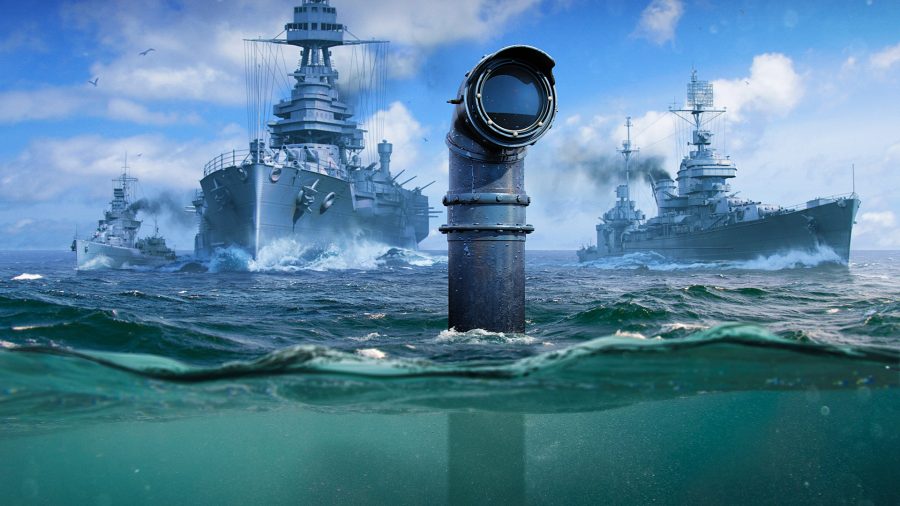 You’re going to be staring through the lenses of your binoculars quite often in World of Warships, so it’s important that you like what you see on the other side. The perfect image would be a destroyed enemy vessel, and while that isn’t guaranteed to appear, you can take some steps to increase the chances.

The scale of its reticle changes with the zoom level

One of the most important steps is choosing a crosshair. A staple mod type in the World of Warships community, many provide additional reticles to aid firing alignment, while adding some sweet visual flair. In our books, the best is the dynamic Nomogrom Modern crosshair. Sleek and simplistic, the scale of its reticle changes with the zoom level, and its ‘time to target’ estimate lets you precisely plan the timing of your next volley of shells.

Take it for a test run and give yourself some time to get visually accustomed. Once you master its dynamic reticle scale adjustments, you’ll never want to return to a static crosshair. 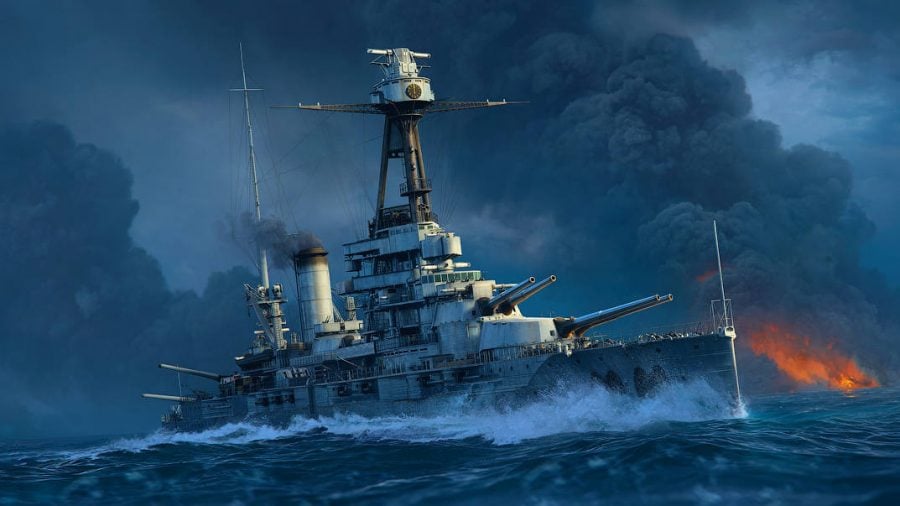 In the early stages of any skirmish, silence is key. Each time your ship’s main battery is unloaded, its detectability shoots upwards, and your exposure to the enemy heightened for the next 20 seconds.

Seaside holiday: These are the best naval games

This mod provides a handy means of tracking that jump in detectability, adding a timer to the user interface that informs you how much time remains until your ship returns to its usual, quiet self. Not revolutionary, but a useful and unobtrusive means of keeping aware of your exposure to the enemy. 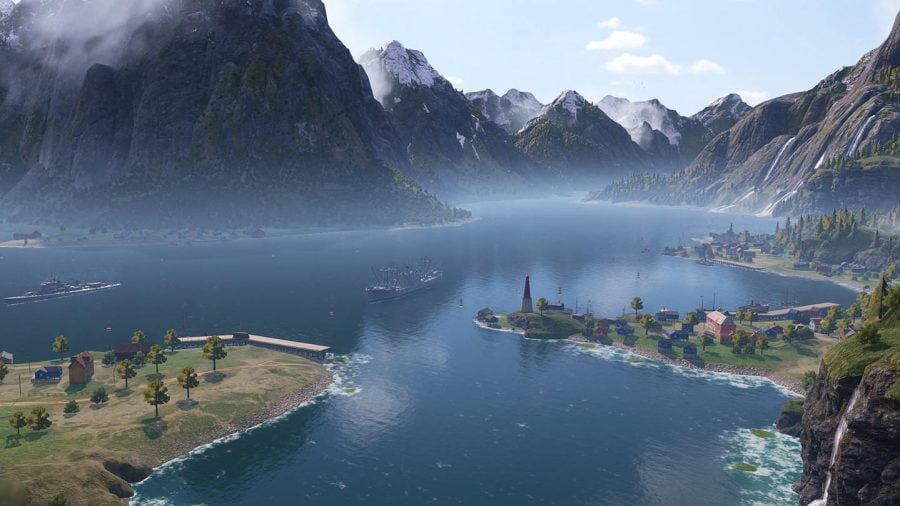 Positional information is essential to following through a battle strategy. Reading map locations of allied ships relative to surrounding covering terrain and enemy fire is essential for victory. It can be frustrating, then, that the default mini map in World of Warships is so small, making it difficult to keep track of ship positions in a hurry.

The Fading Transparent Minimap MOD has a simple, but effective, solution. Enlarging the mini map into a wider display, while adding a gradual translucent tint that prevents the expanded window eating up too much screen space. Choose between a variety of map sizes and translucency levels for a combination that suits, and keep better check on enemy positions while maintaining an eye on their salvos. 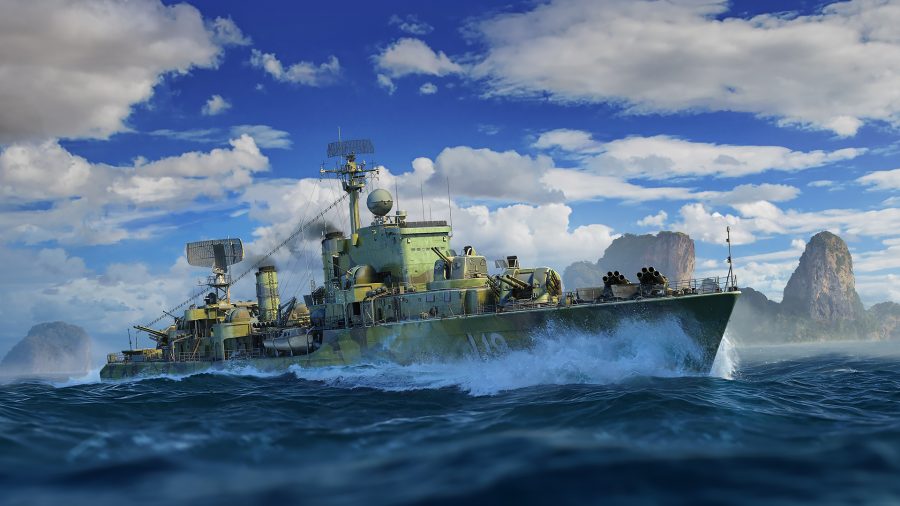 Although very simple in premise, many an Admiral will swear the Score Timer mod is essential to consistently secure victory.

Accounting for the number of players left floating, and the cap points each team controls, the mod predicts two pieces of information – which team will win, and the time required for each team to swing the battle in their favour. You can grasp a good overview of the battle and your team’s performance from a simple glance at the top of the screen.

Lookin’ fly: These are the best War Thunder skins

Score Timer doesn’t feed defeatist sentiments of the losing team, nor stymie the soon-to-be victors with false promises, but plays a strategic role. Decide whether the final, valiant push against the enemy needs to come sooner rather than later, or if your out-flanking assault should prioritise speed of attack over quantity of ships.

Knowing how much time your team has to reasonably clinch victory from the enemy, or for how much longer you must fend off enemy advances, is essential to battle strategy. 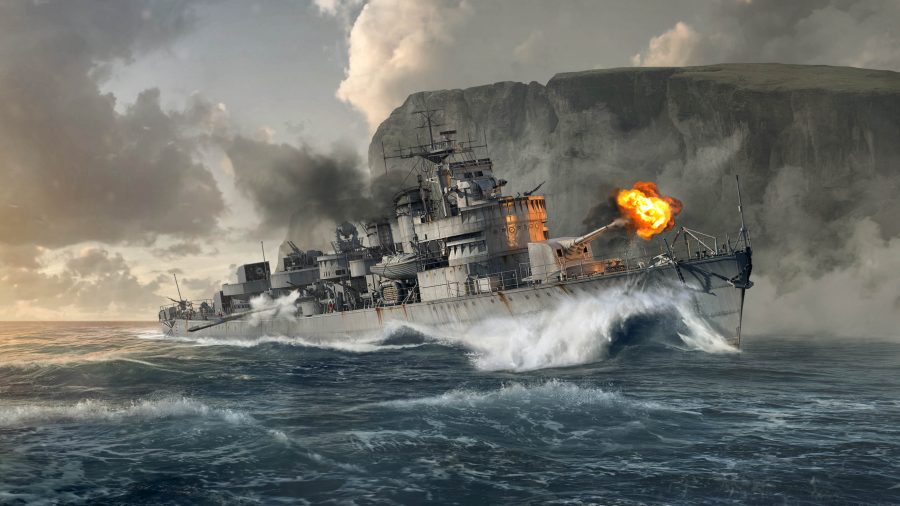 There’s no getting around it, a mod about loading screens sounds resoundingly boring. Nobody’s interested in them. But they might be after installing this mod. While the default World of Warship loading screen shows only your team roster, this mod displays the minimap, marked with each team’s starting position.

It’s a cheap and cheerful way of grabbing a quick understanding of what awaits on the high seas. Plan which cover to beeline, and from which direction to assault the enemy. If all goes well, your team might follow.

As important as it is to know the enemy, any formidable commander will tell you it’s equally important to be aware of what the enemy knows about you. The Rader Timer mod serves just that purpose, notifying you when an enemy Radar or Hydroacoustic Search detects your ship and starting a stopwatch to record the elapsed time post-detection. It won’t say for sure if you’re still marked on the enemy’s map, but provides a means for you to roughly estimate your visibility to the enemy.

Fighting against Russian vessels? You’ll likely disappear from their radars after ten or so seconds. Detected by Hydroacoustic Search? Your movements could be tracked for a whole minute. Plan your actions accordingly, and wait for a prolonged time before emerging from hiding. 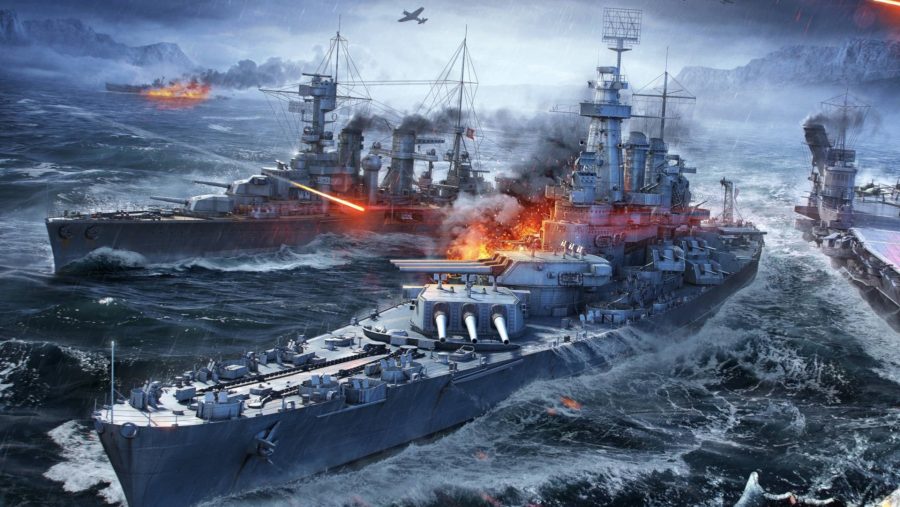 Wallow in your glory with Session Stats. Calculating your performance statistics for all battles played across the current game session, this mod is for players who like to keep a tight record of their successes. View your battle victories, earned XP per battle, earned credits per game session, and a host of other short, sharp statistical insights. A simple way to check whether this round of World of Warship has been a success up to your usual standards.