Repos Production’s 7 Wonders: Architects has a very big name to live up to. The original 7 Wonders board game, released in 2010, has scooped dozens of awards, and spawned five expansions over the years, plus a full second edition in 2020. Its vivid, Age of Empires-esque ancient world aesthetic, married to some compelling, multi-layered card drafting gameplay, has made it a household name.

If anything, its 2-player board game spinoff 7 Wonders: Duel, released in 2015, set the bar even higher – a polished, competitive experience that’s a must-have game in its own right, and sits confidently in our list of the best couples’ board games of all time.

So, when I cracked open 2021’s 7 Wonders: Architects, the question uppermost in my mind was: where does this game fit in? Architects had been pre-billed as ‘7 Wonders, but simpler’ (and so it is) but I wasn’t quite sure why that was something I should want. The original is far from the most mind-meltingly complex game out there, and, although a family-friendly version of a classic is always a noble aim, 7 Wonders did not feel, to me, like a system from which much fat could be cut away without losing some of the meat too.

Luckily, I was dead wrong. This is an ingenious little game – and it’s not just for family time, either. Let’s take a closer look. 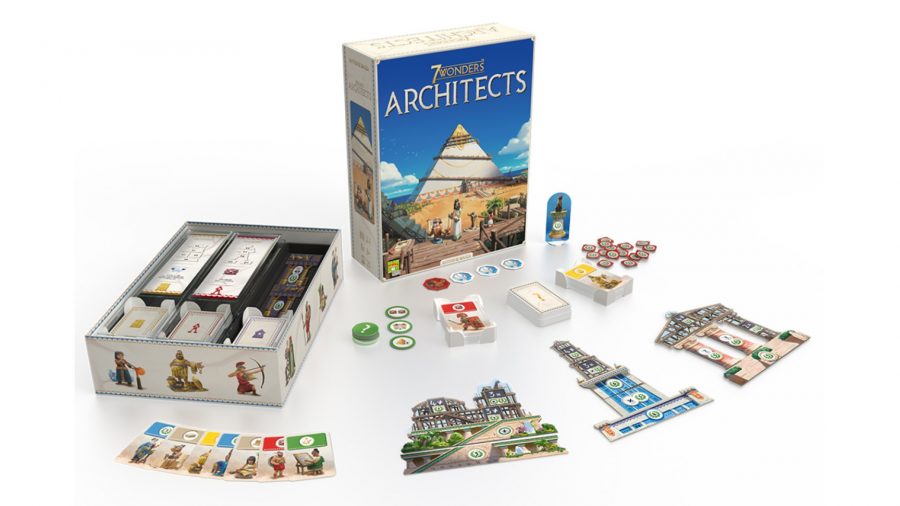 Just like the original 7 Wonders and Duel, Architects is the work of French designer Antoine Bauza, and published by Brussels-based Repos Production (the latter now under the wing of Asmodee International, since it bought the studio in 2019). It’s for two to seven players (though it’s best with three or more) and, in my testing, holds true to the box’s claim that a game takes just 25 minutes. Yes, I mean it.

Just like the original, you build an ancient Wonder by collecting cards

Just like the original, you’ll set out to build one of the seven ancient Wonders of the world – by means of collecting and playing down cards to advance your project in one way or another – and must collect victory points (VP) along the way by choosing those advancements wisely. So far, so 7 Wonders – but this is where the tweaks begin. In the original 7 Wonders, the core mechanic is traditional card drafting: you draw a hand of seven cards, choose one to take and play down, then pass the remaining six cards to the next player; you’ll then take the hand from the player on your other side, rinse, and repeat until you’ve played three full rounds. If your memory’s good enough, you can keep track of, and ‘draft against’ choices made by opponents all around the table – but boy, can it take a lot of concentration and mental elbow-grease. 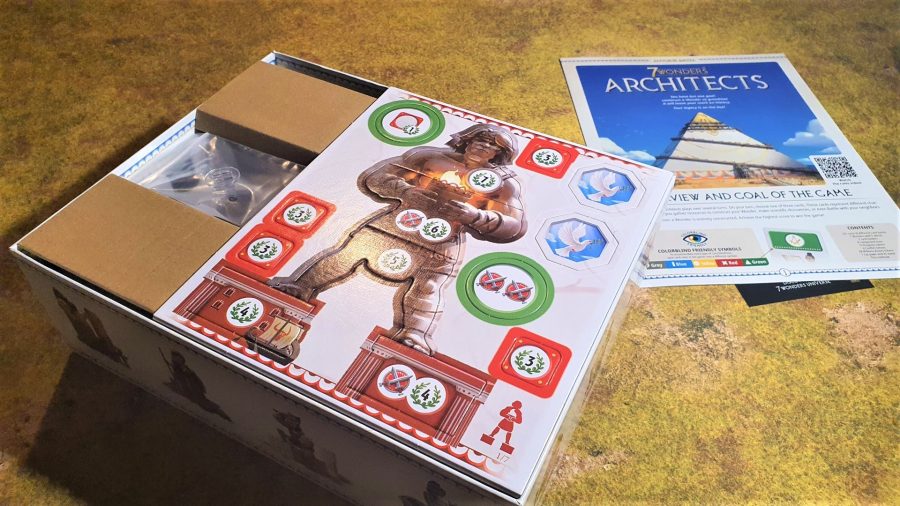 The titular Wonders – though key to many winning strategies – aren’t a big part of the original game’s visual experience; you simply spend one of your construction cards (and a stated cost) to build each stage, and mark it by sliding that card under your player board. That’s it.

Architects, by contrast, cuts back on the first element – and builds out the second. Instead of three separate rounds of old-school drafting, on your turn, you simply choose the top card from one of three possible decks, put it down, then take an action if you can.

Bygone ages: These are the best historical board games

Three decks, you ask? Yep: each player gets their own deck, with the top card always face up – and, on your turn, you can either take a known card from the player decks to either side of you, or, if neither of them appeal, a face-down card from the shared deck in the middle of the table.

It’s a neat system, which avoids the card-passing rigmarole of a traditional, full table draft, and cuts down the brainspace required to play out each turn – but still allows you to puzzle out and try to undermine your neighbours’ choices if you want to. 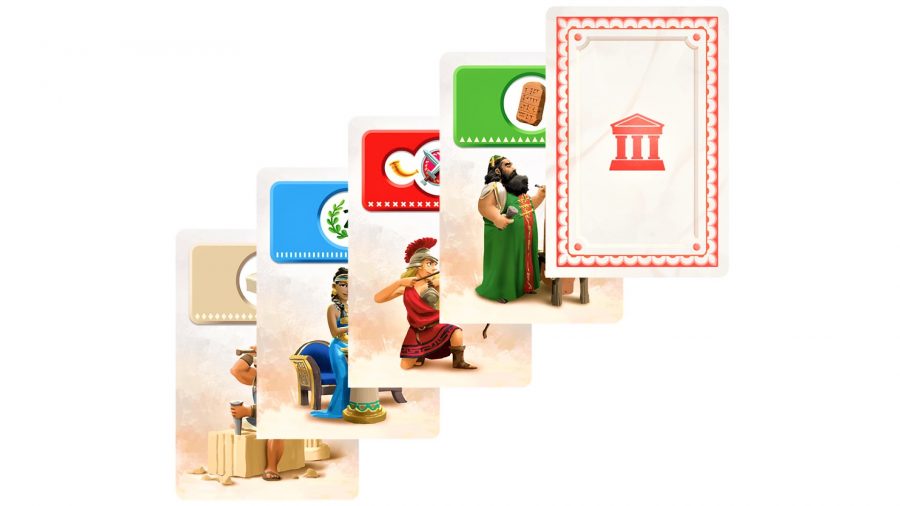 The cards themselves are slimmed down a little in variety, and strikingly colour coded. Each set of green science cards you cash in grants your pick of three Progress Tokens – permanent buffs that boost your VP generation and card draws. Red cards permanently add to your military strength, and can trigger battles that pay out VP to the winner. Blue cards simply gift you VP, while sets of grey cards (five flavours of raw materials) will construct stages of your Wonder.

Each player gets a five piece cardboard Wonder to build

Speaking of Wonders, each civilisation now gets its own unique cardboard facsimile, made up of five double-sided pieces – one side all shiny and finished, the other depicting scaffolding and sweaty labourers working to complete your architectural legacy for you. As you complete each stage of the Great Mausoleum (as Halicarnassus) or Hanging Gardens (as Babylon), you’ll flip its piece over, literally ‘building’ your monument as you play. In a particularly neat change, instead of ending after you’ve drafted through three pre-set ‘ages’, Architects ends when the first player completes their Wonder – a masterstroke which, in one fell swoop, ensures a quick pace of play; puts a hard cap on playtime, and provides beginner players with a simple, accessible path to victory that’s right there in front of them, in fun jigsaw form from the get-go.

Will you make a mad resource rush to complete your Wonder, hoping to cut everyone else’s game plans short before they outgrow your Wonder’s limited in-built VP rewards? Or play a longer game, stacking up science buffs, or carefully card-counting to up your chances of drawing blues? Though Architects plays out in a shallower strategic pool than its ancestor, you can still use a few different strokes to swim across. 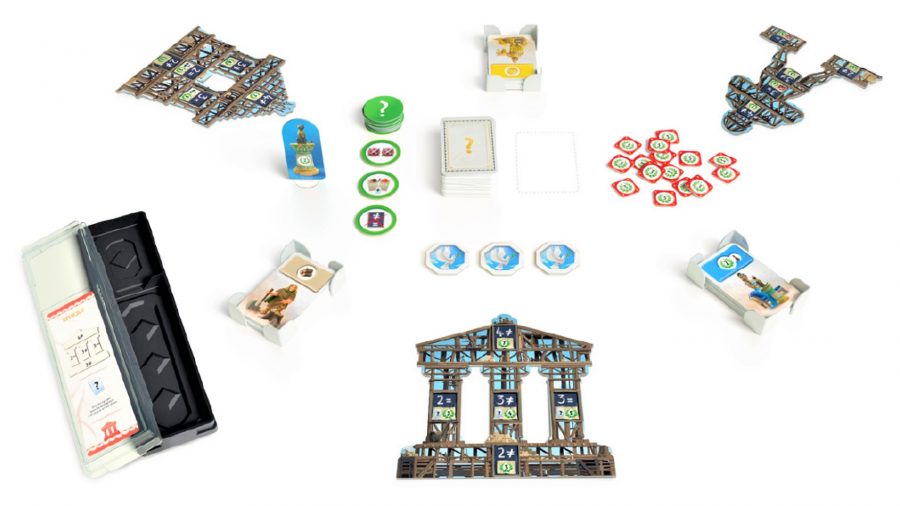 It’s fair to say Architects hasn’t made an explosive impact on the board games scene since its full worldwide release on November 5, 2021 – but, while there are many possible reasons for that, I’d contend that it definitely isn’t down to the game’s visuals and design.

The pyramid-emblazoned box is bright and energetic, and the tastefully cartoonified artworks used throughout (bright red legionaries on soldier cards; a bejeweled, jolly-looking merchant for Gold cards, and so on) manage to be quite charming – as well as nailing their primary task: making every game component ultra-distinctive and recognisable. Shape-coding as well as colour-coding to distinguish sets of cards – for the benefit of colourblind players – is a particular, and somewhat uncommon, virtue here.

Top tables: These are the best board games of all time

Most marvellously, Bauza and Repos seem to have managed to reserve a fair portion of the development budget for creating what is, hands down, the finest included-as-standard storage solution I’ve seen in a board game, ever.

Each of the game’s seven civilisations has a neat, stacking plastic bin to hold not only its five cardboard Wonder stages – but also its deck of cards, with a handy, solid little plastic caddy to easily lift the deck in and out. The shared deck and token pools get a long plastic bin of their own, too – and, all stacked, they fit perfectly in the box. For some, this is already too many words to have spent on the topic – but, for others (you know who you are), it’ll be a key selling point. 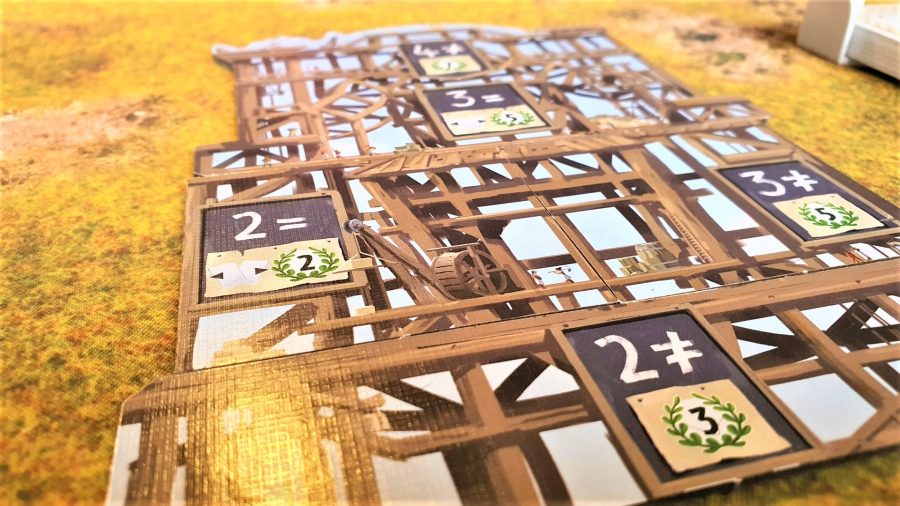 Is 7 Wonders: Architects any good?

7 Wonders: Architects is a visually appealing, cleverly designed ‘light’ version of the 2010 original, that’s easier on the brain, but retains enough moving parts to make games feel engaging and eventful. It teaches quickly, plays quick as lightning, and gives ample room to play to a chosen strategy, without demanding any real deep thought or complex planning.

With fewer types of cards, no iterative three-age structure, and radically simplified card drafting, Architects sacrifices the original’s strategic and tactical depth in exchange for accessibility and a pretty toy building to put together. That’s simply not going to sit right for some folks – and that’s fine, because 7 Wonders second edition is right there. More pertinently than its strategic limitations, though: this game is a surprisingly successful bid to commit the essence of 7 Wonders into an undeniably simpler, ultra-convenient package that, against all the odds, manages to be even quicker to play than the original. Extra tactile satisfaction from the delightful little Wonder pieces, and a light-hearted visual overhaul, conspire to create a game that looks and feels totally different from its more cerebral parent, despite sharing the same basic DNA.

All told, it’s earned its place on my shelf as an exemplary ‘warm-up’ game; either for beginners warming up to the hobby, or old hands warming up for a long night of heavier, more time-hungry titles. Frankly, I’d have given it a pass just for those damn plastic bins. 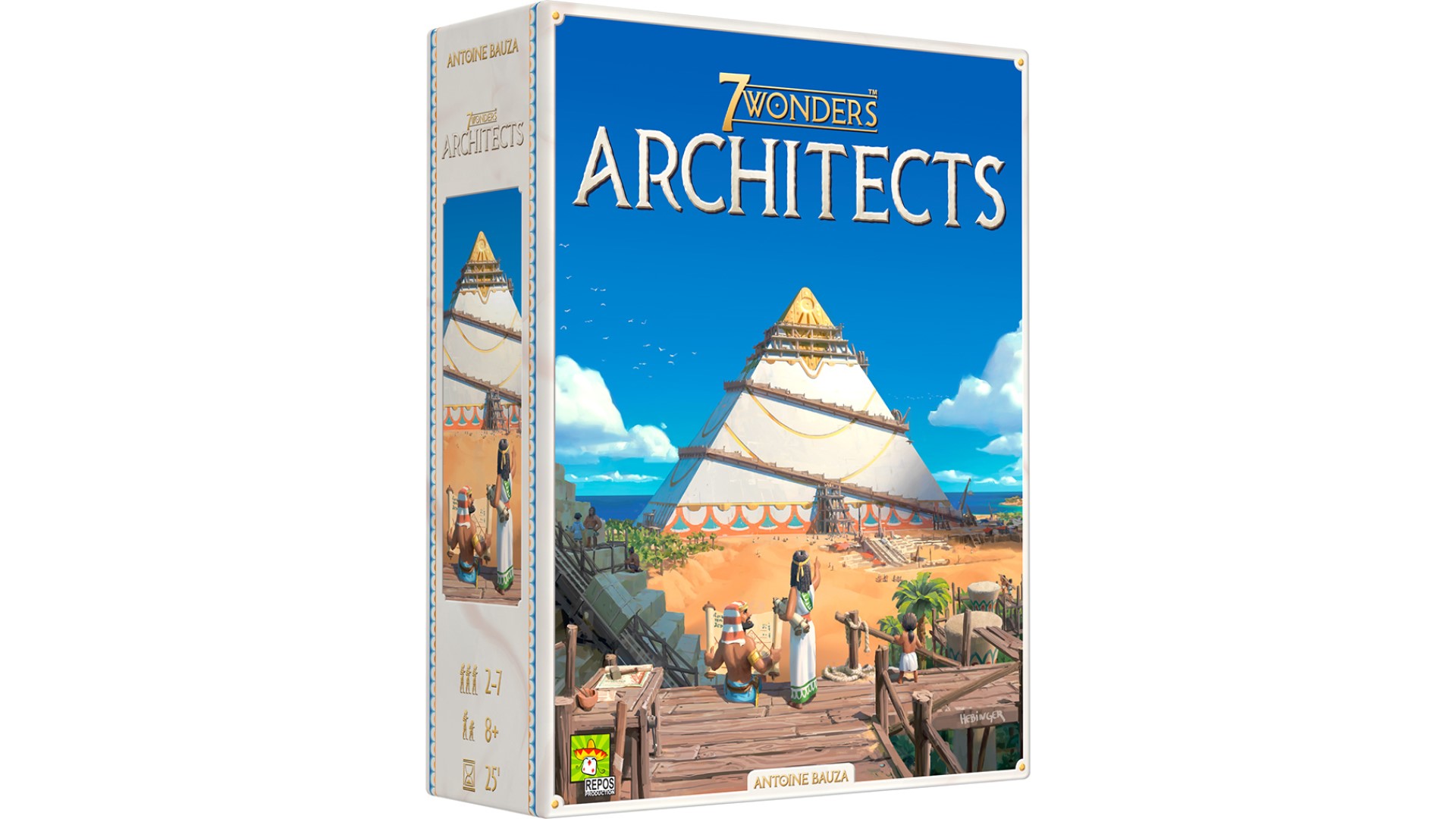