Martin Wallace is an old hand at economic management. As long as it’s carried out on the tabletop, that is. The designer of 2007’s hit economic strategy board game Brass: Lancashire, a contributor to 2018 follow-up success Brass: Birmingham, and creator of a raft of other crunchy, commercial eurogames, Wallace has something of a penchant for board games entrenched within industrial development.

So when it came to designing the board game adaptation of city-builder Anno 1800, his portfolio seemed fitting. The original videogame, which has you expand an industrial base across your home country and colonial settlements, while catering to the needs of your citizens through rigorous supply chain management, wasn’t worlds away from his past work. Which probably helped, since he’d never even played the videogame.

“I knew nothing about Anno 1800,” Wallace says about the origins of his design process. “But I figured, it’s set in the 19th century, and it’s an economic game, so how hard can it be?”

As it turns out, not that hard. Completed over a few months of rapid design work, Wallace never even touched the videogame. He first attempted to glean the game’s core mechanics through watching others play it on YouTube, but soon gave that up for being “just so dull”, as well as unsuitable for revealing the game’s hidden mechanical depth. Instead, he ended up following that tried and tested process of learning loved by millions everywhere: getting a mate to do the work for you. 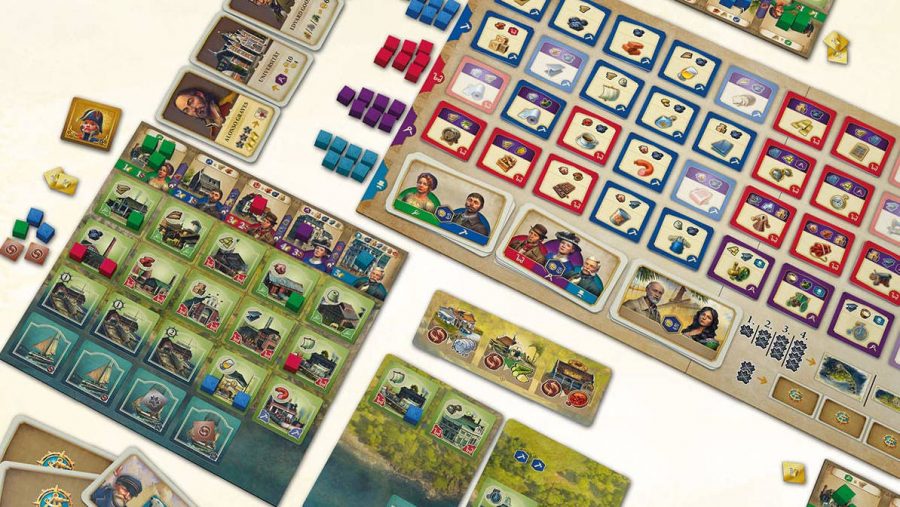 “Board game design and video game design are quite separate in a number of respects. So just by him debriefing me on the game, I was able to get the core mechanics, and then go ‘Right, okay, how am I going to get those elements into a board game?’”.

I knew nothing about Anno 1800

The result is a game that ditches the core city-building features that casual players of the videogame might be most familiar with. Rather than placing down buildings across a map and constructing various production facilities near natural deposits to gather their resources, the Anno 1800 board game is a test of worker distribution.

Apportion your workforce among production buildings to generate resources, before spending those accumulated goods on further industrial development, unlocking more resources, and shrewdly leveraging your resource base along the optimum upgrade path. 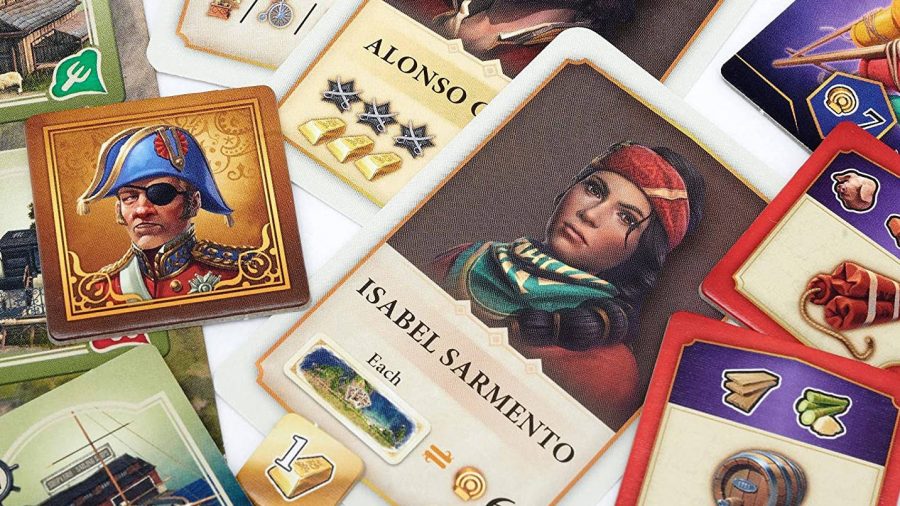 Throw in the opportunity to explore the New World to unlock new resources, have each player operate a fictional island nation interacting through trade, and introduce character personalities that impose onerous objectives with big rewards – and you reach a combination that, according to Wallace, embodies the core features of the videogame.

“In a sense, there was an inversion,” Wallace says. “When I design a game that uses resources, I always want a small number of resources, otherwise it confuses people. Anno’s got thousands, literally. There’s just so many resources, I thought: there is no way I can boil this down to a handful, because the whole game is about generating resources of different types.

Greatest games: Our pick of the best board games

“So that’s when I had this kind of brainwave. If I can’t boil down the resources to a small number, then I’m going to have to work with it. In the board game, it’s not that you’re gathering resources, it’s a case of whether you’ve got the manpower to gather them. That was the key twist, and everything else fell in around that pretty quickly.”

Rather than focus on any kind of building placement or visual city-building, Wallace says he wanted, first and foremost, to preserve the videogame’s concept of population desires. Just as the original game has players produce specific goods to fulfil their citizen’s needs and enable their technological advancement, the board game, too, hands you an assortment of citizen requests. Acquire the appropriate technologies and production buildings to generate the goods demanded by your population, and you’ll earn points. 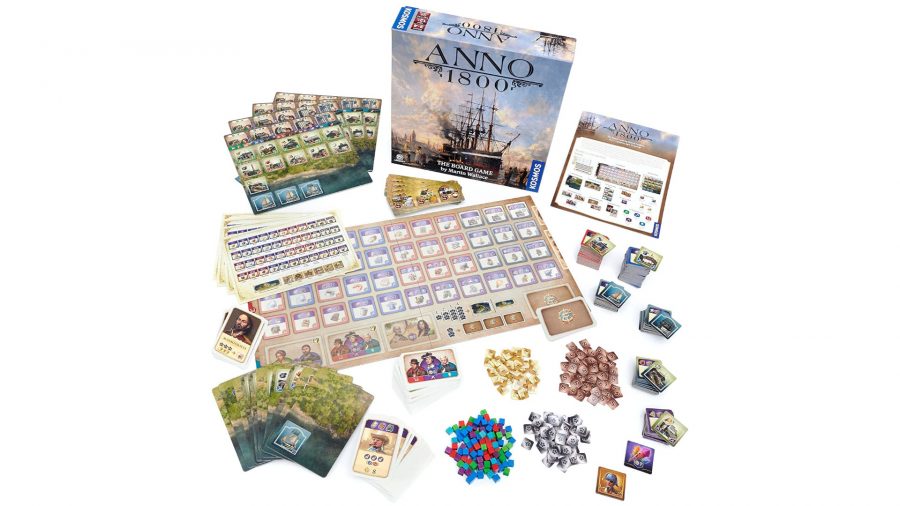 “There are certain things that I ignored, like combat,” Wallace says. “Combat’s a thing in Anno 1800 the computer game, but it really doesn’t work well in an economic board game. As soon as you’ve got conflict, there are winners and losers, and generally, the losers just fall further behind.

Combat doesn’t work well in an economic board game

Wallace is no stranger to licensed titles. Having worked on several unreleased board games based on familiar brands, as well as a couple of tabletop adaptations of Terry Pratchett’s Discworld series of fantasy novels, he talks about the value of remaining true to the source material, and capturing its essence. But videogames, he says, present a strange, double-edged basis from which to work. 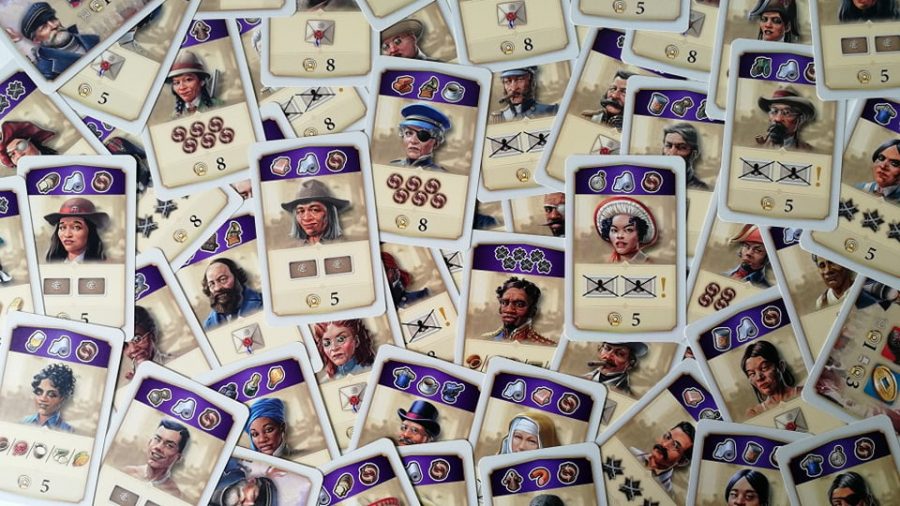 “It’s a little bit easier because they’re already games,” he says, “So you’ve got that going for you. But on the downside, computer games can be inordinately complex, because they’re just zeros and ones. You can have almost infinite complexity within a computer game, which you cannot embody in a board game.

“They can have maps of any size, whereas, for a board game, you’re worried about that, because you can only get so much stuff in a box and tables are only so big. I knew right at the beginning, a map [for Anno 1800: The board game] was out of the question. Also, you can intimate islands through artwork, so that’s not a big problem; you can abstract those things.”

Two players: These are the best couples’ board games

When designing Anno 1800, it was a case of imitating the plausibly imitable, and sidelining those elements that were either unfeasible to replicate on the tabletop, or might undermine the other elements of the game.

“It seemed to me that the key thing with Anno was the way resources were used, and the way they were connected in a kind of tech tree,” Wallace says. “Certain resources are needed to gain certain other resources, which are needed for others. 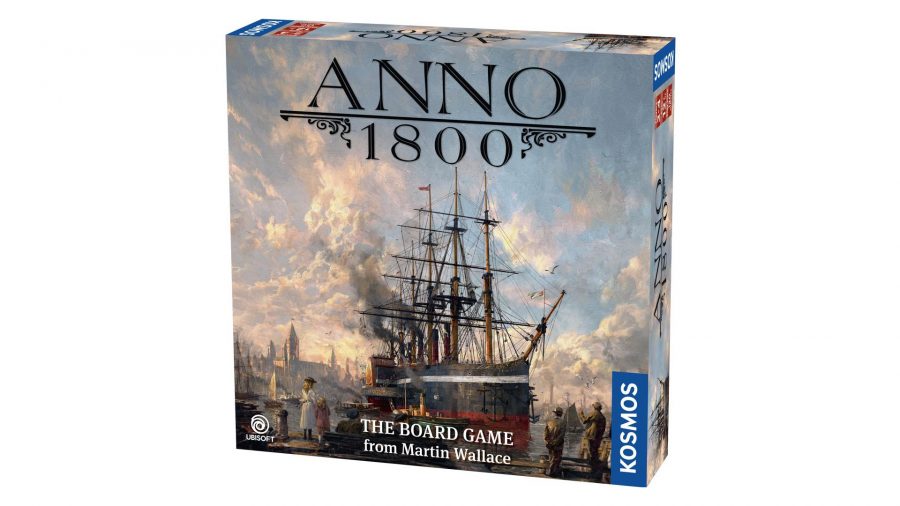 “For me, that’s an interesting bit, because people like tech trees in Civilization-style games. That was the thing I latched onto. I thought: that’s the thing I want to do well, and just hang everything else around it. If it ends up being like the computer game, then that’s great.”

When it comes to creating a licensed title, Wallace says it’s not the job of a designer to simply replicate the themes or mechanics of their source material into a board game. Rather, he tries to create games in such a way that the “players within the games [are] thinking in the same way that people would have thought during that historical period of time.”

In the case of the Anno 1800 board game, that meant having players assign workers to various production facilities, and encouraging them to let no available labourer go unused. Similarly, each player starts the game with a supply of farmers and artisans that are gradually developed into higher-skilled workers, imitating England’s journey through mechanisation in the 18th century. Cotton, too, is overly represented in the demands of your citizens, in an effort to replicate its huge importance in British exports. 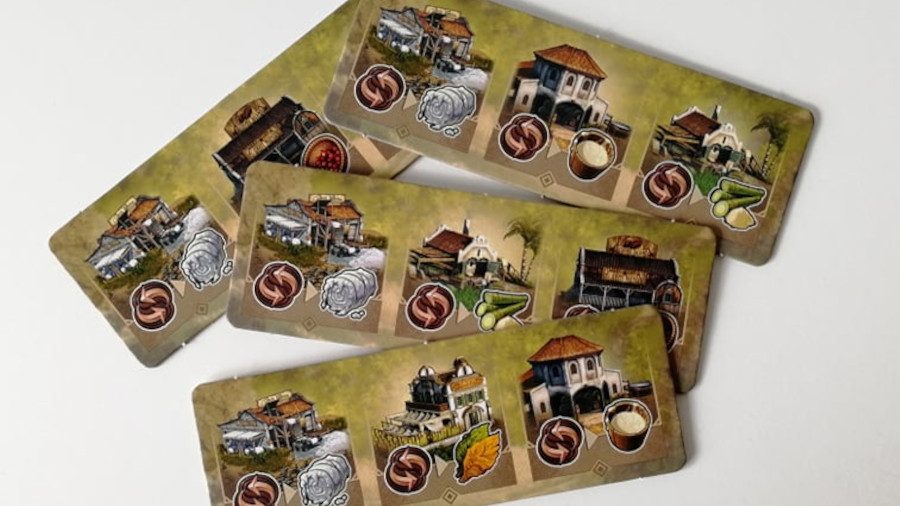 “A lot of the game was based on my understanding of British economic history, and trying to model that in a simple way,” Wallace says. “Which probably isn’t there in the Anno computer game, because I don’t think that’s what they were trying to do. I didn’t really care if it was modelled by the computer game because that’s reality to me; that felt, to me, historically right.”

For all his sincere consideration of the source material, it’s this nonchalant attitude that seems to best represent Wallace’s general sentiments towards licensed adaptations. It’s an attitude that’s reflected just as much in his decision not to play the videogame as it is in his design choices.

“The key thing is making sure it’s a good board game,” he summarises. “And then, after that, does it match the computer game? Yeah, it’s close enough, so we’ll go with that.”