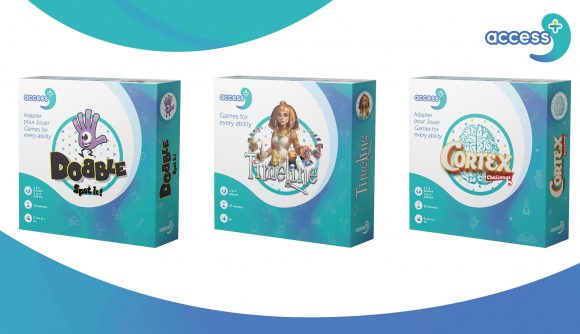 International board games conglomerate Asmodee is launching a new specialist game studio, titled Access+, which will adapt its existing board games for players with cognitive disabilities, the company has announced.

Detailed in an official press release on Tuesday, Asmodee says the Access+ accessibility studio will draw on expertise from its research division and an “external scientific committee of expert care professionals” to “adapt and test the material, rules, and difficulty of its titles to stimulate cognitive functions, promote positive emotions and social relationships, and provide the joy in discovering (or rediscovering) the pleasure of playing together”.

The new studio’s first batch of board game releases will be Access+ versions of Spot It! (called Dobble in the UK), Cortex, and Timeline, scheduled to launch in France, Belgium, and Canada in late 2022, and worldwide in 2023. Asmodee’s not yet given any specifics as to exact pricing, contents, or distribution of the new games – but it does offer some extra details on the adapted gameplay and cognitive features of each title on the Access+ website.

According to Asmodee’s press release, the new studio intends to tailor its games to be “ideal… for medical practitioners, schools, and caregivers who have people with special needs, including cognitive disabilities, under their care”.

In the release, Mikaël Le Bourhis, head of Asmodee’s Research and Development wing, says Access+ aims to make “games that not only are fun to play but provide real, tested benefits to those with special needs, starting with cognitive impairment”.

“Board gaming is social by nature,” adds Asmodee’s Chief Executive, Stéphane Carville, “and Access+ titles allow families and friends to re-introduce the fun of board gaming to their loved ones with special needs”.

Asmodee’s massive portfolio of acquired tabletop games companies means it’s the owner of super-popular titles like Ticket to Ride, Catan, Pandemic, and more. Should Access+’ adapted games catch on, we’ll be looking out for accessibility-focused redesigns of some of those big names to come.