Looking for the best Star Wars Lego sets? Fans of the galaxy far, far away have been building their favourite Star Wars ships, battles, locations, and characters in miniature form for years. Nearly every parsec of George Lucas’s beloved universe has been recreated in Lego, and many of these sets don’t only hold a nostalgia factor, they’re fantastic builds in their own right.

We’ve rounded up the best Star Wars Lego sets that you should spend some credits on. Picking from across the original, prequel, and sequel trilogies, you’ll find many iconic scenes and beloved characters here. You won’t have to break the bank, either, as we’ve picked out a range of super-collectible premium sets alongside more affordable, but no less brilliant, sets to go with them.

New Star Wars Lego sets continue to be released all the time. Whenever a new TV show is launched or animation hits Disney+, you can be pretty sure that a batch of original Lego sets will accompany it. We’ll keep this list up to date with the best sets as they arrive.

These are the best Star Wars Lego sets: 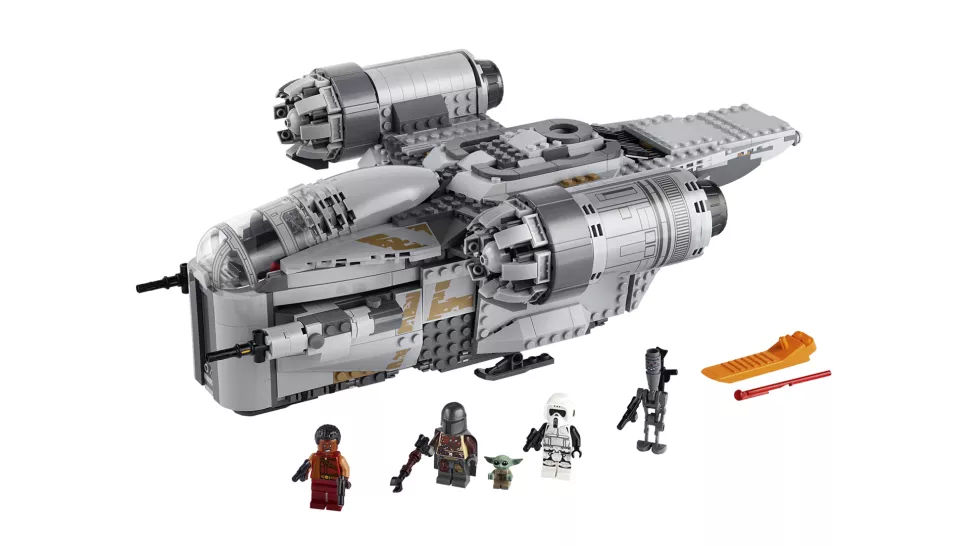 The Mandalorian isn’t just a superb TV show, it’s a gateway into the Star Wars extended universe. And among the many fabulous new characters, locations, and lore that the universe brings is Mando’s very own ship – the Razor Crest. A design that’s distinct from other classic starfighters we’ve seen across the franchise’ history, it’s no less unique. Plus, no one can deny that seeing Baby Yoda as a minifig is the cutest thing ever.

This is a hefty set, though, at a high price tag. But with that, you get a ship that’s incredibly detailed, full of accessible compartments, and complete with lots of lovely minor touches (including a stand to hold your latest carbonite bounty). This is one of the more creative Lego Star Wars sets we’ve seen in recent years that recreates a soon-to-be iconic ship. 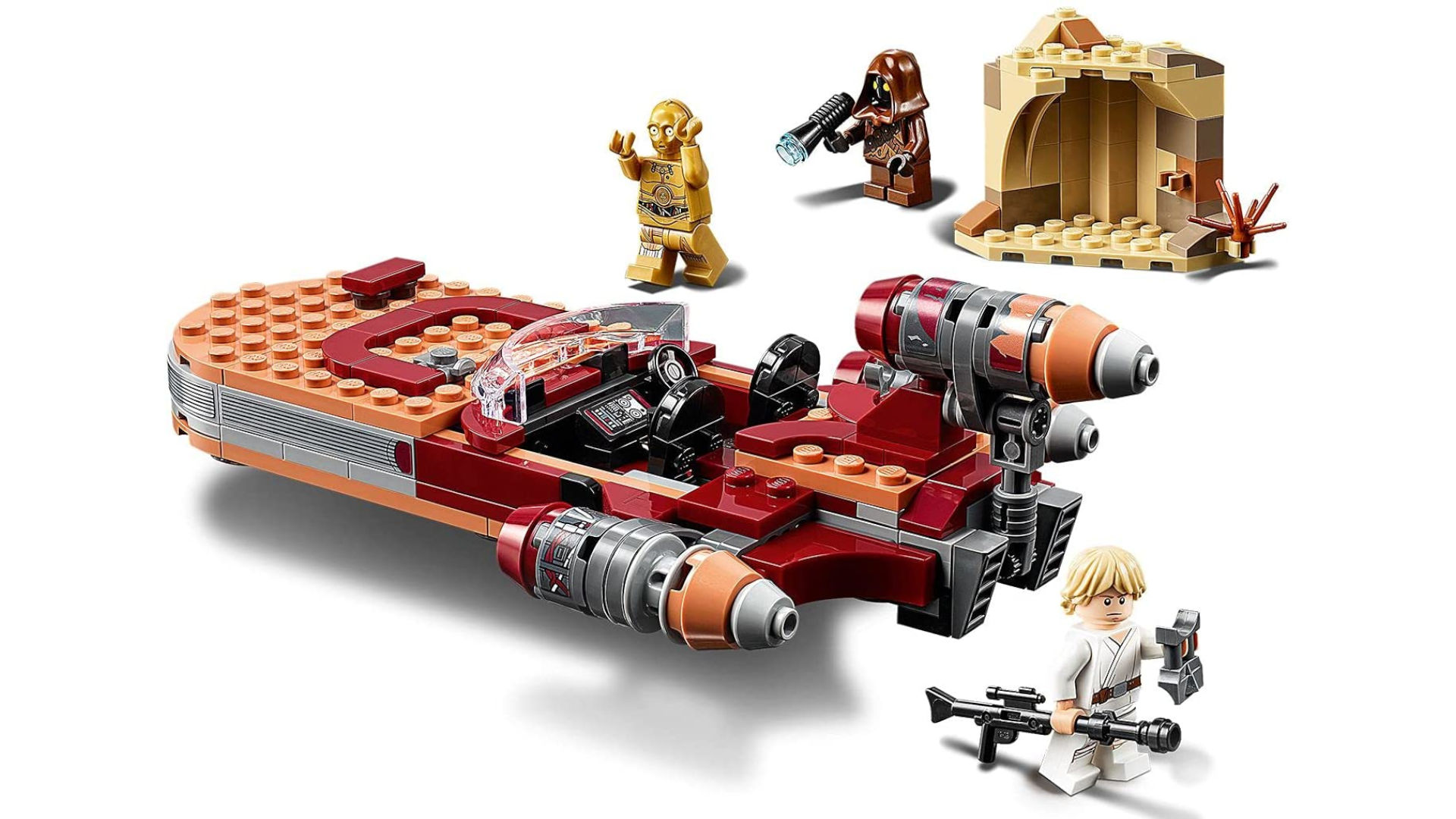 There have been many Lego sets of Luke’s Landspeeder, but this version released in 2020 might well be the best. All curves, detail, and a hidden compartment, the vehicle might have only appeared briefly in A New Hope, but sure does stand out as a spiffy model.

I have altered the deal: These are the best Star Wars board games

With it, you’ll get Luke, who’s sporting a snazzy dust shawl, CP30, and a Jawa. There’s also a few accessories for the minifigs, such as a pair of binoculars and a rifle, as well as a small corner of terrain for the Jawa to hide in. 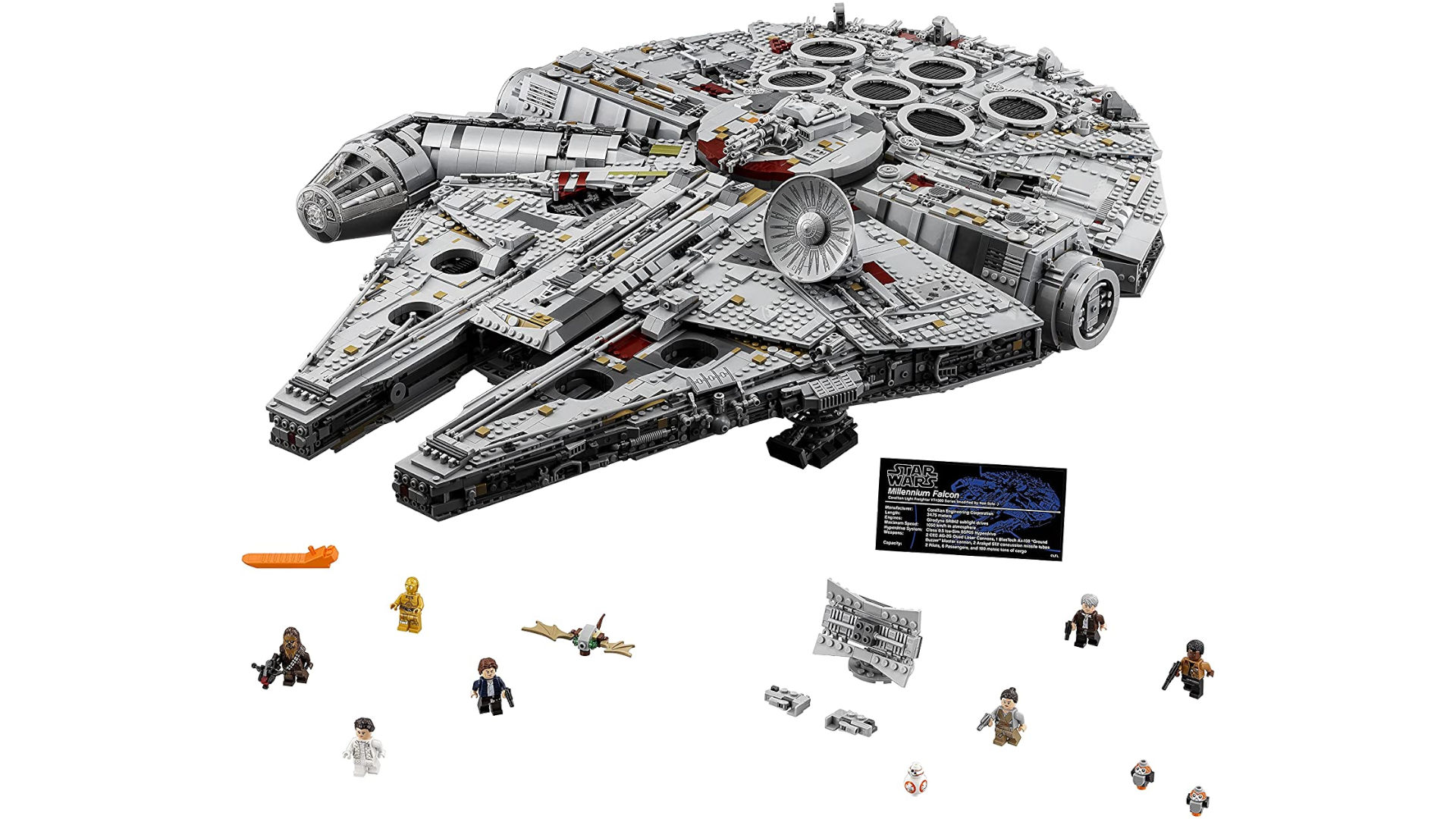 If there was a prize awarded for the ultimate Star Wars lego set, this would certainly take first place. A monument as much as a model, the UCS Millennium Falcon has become infamous in the Lego community for its incredible detail, astonishing accuracy, and sheer size (on release, it held the record for the Lego set with the most pieces). It’s a true beast, but one that looks as fabulous as the original Millennium Falcon design.

You can open up its individual hull panels to access its interior that, in many ways, is the star of the show. From its cockpit, to its corridors, to its dining area, every inch is overflowing with subtle detail. You can even build it in two variants: as it appears in the original trilogy, or its updated design in the sequels. Think of this as more of a project than a single set. 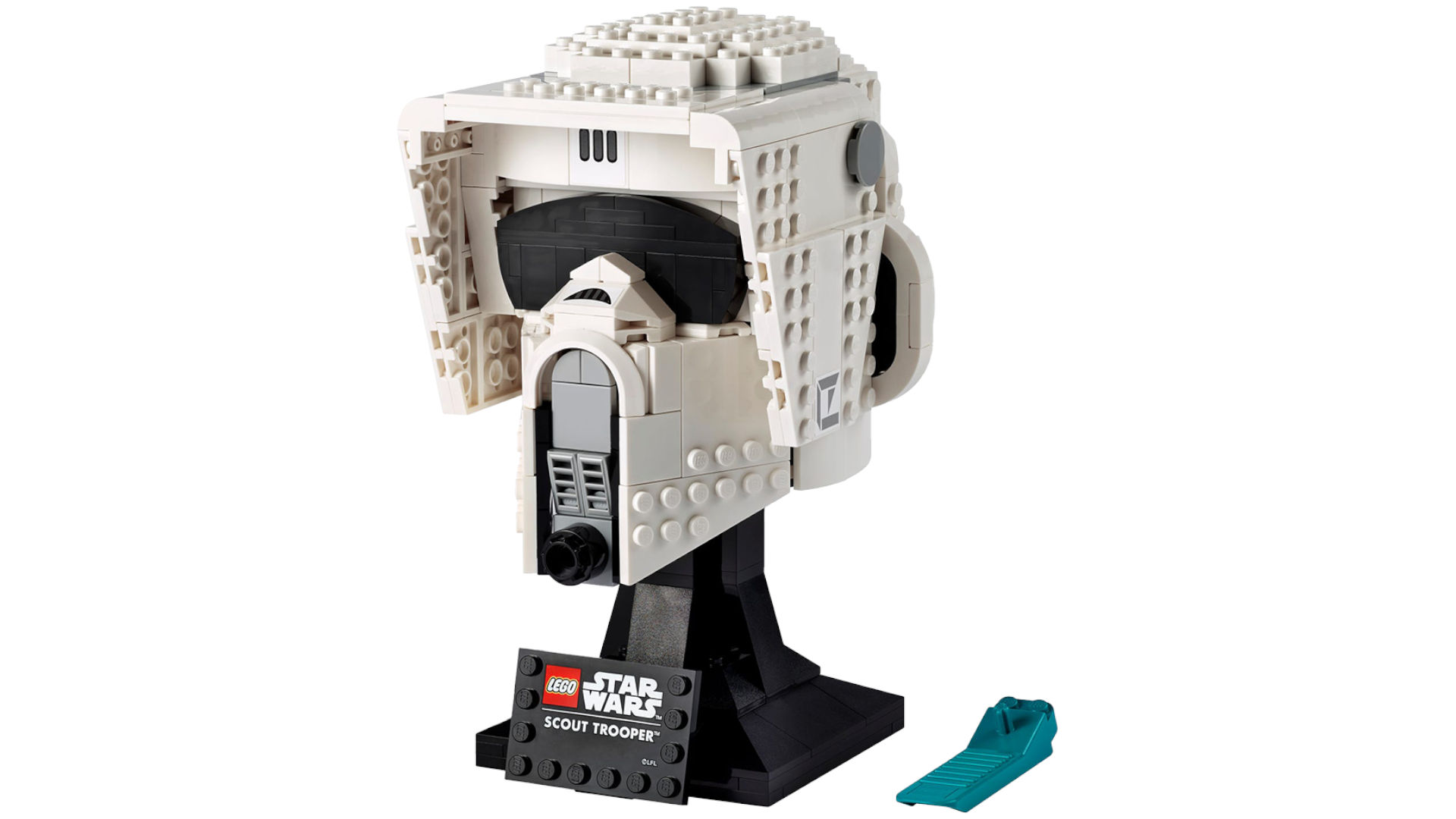 For a different flavour of Star Wars Lego set, check out this Scout Trooper Helmet statue. If there’s one thing fans of the galaxy far, far away love, it’s iconic costumes, and the Imperial Scout Troopers might well take the prize for slickest headgear. Sure, it might not hold a candle to the foreboding terror that emanates from Darth Vader’s mask, but if you want to stand out from the crowd, give a nod to the Empire’s resident bikers.

Tabletop heavyweights: Check out the best board games of 2021

This is a brilliant display piece that looks wonderful on any desk or mantelpiece. Plus, it’s a gorgeous design that uses many creative building techniques to recreate the helmets curves and angular proportions. Not a hard build, but one that certainly looks impressive. 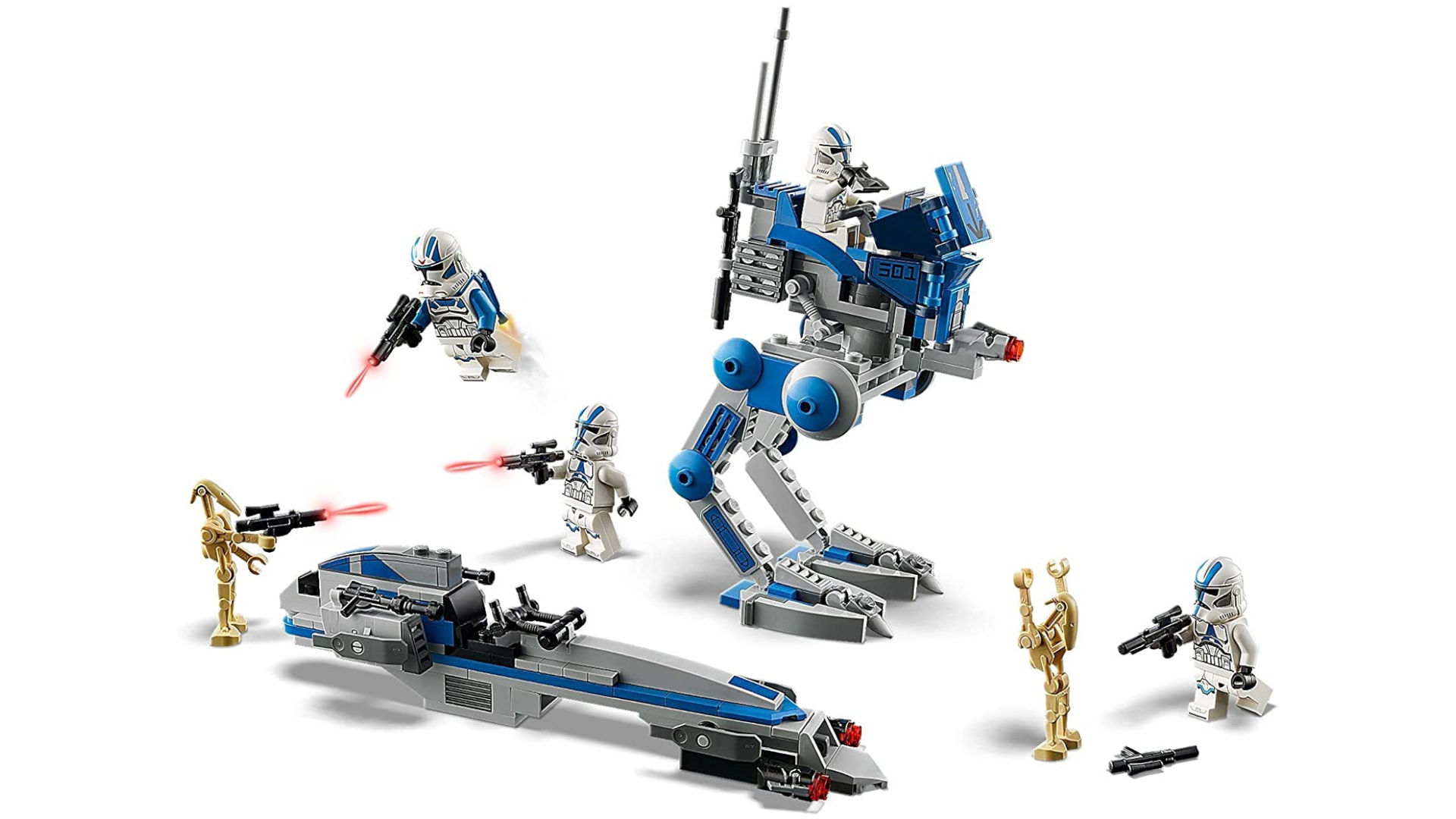 This prequel trilogy battle pack includes a bunch of great minifigs to display, or add to a sprawling diorama if that’s more your thing. But its real draw is the included vehicles. Both the AT-RT walker and BARC speeder bike are fantastic kits that, although small, are packed with little visual additions and attachments.

Play out the Clone Wars with this set, or add it to another larger kit to build a truly formidable army. 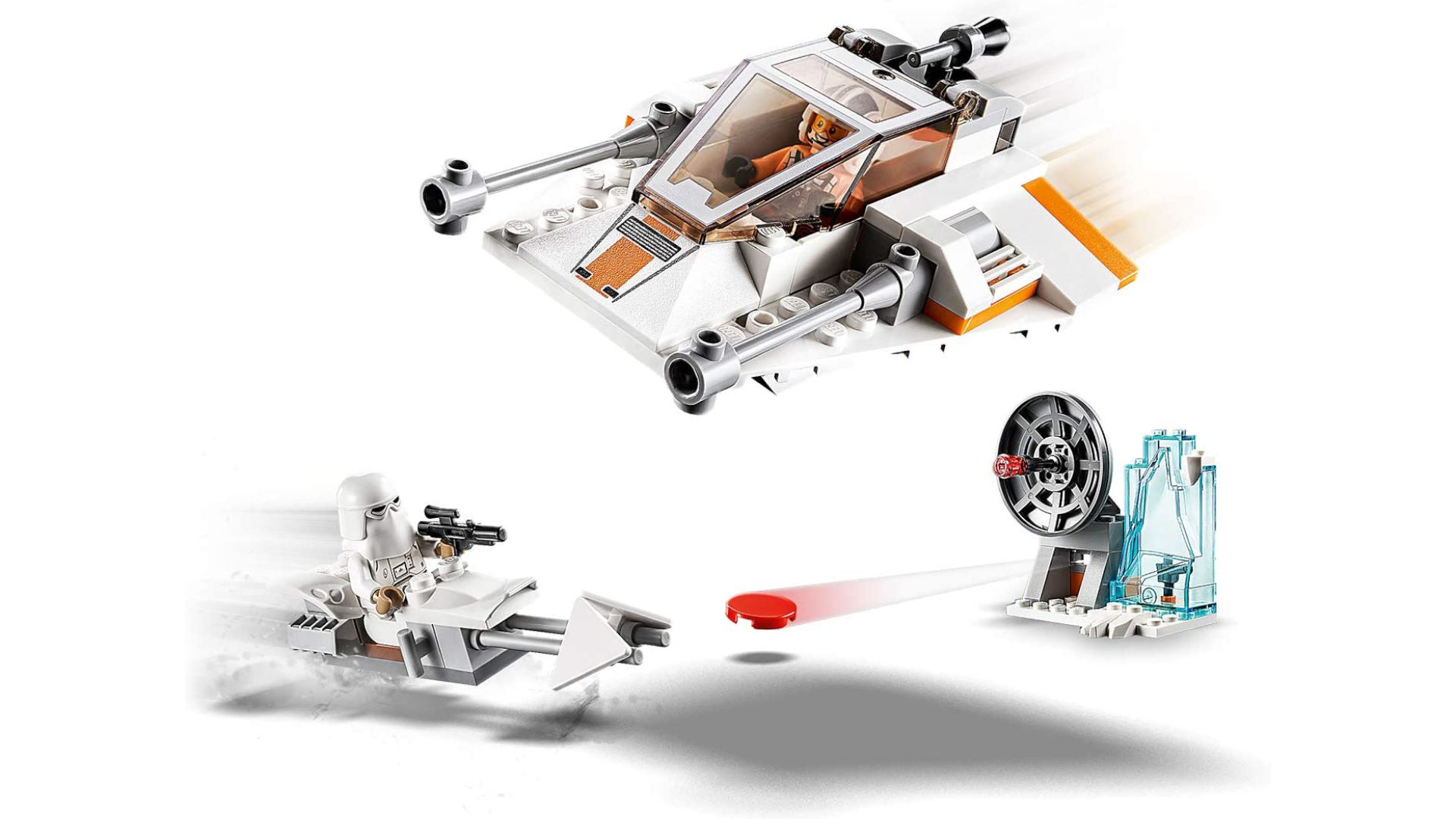 Not every iconic Star Wars ship is a starfighter. The snowspeeder, introduced in The Empire Strikes Back, is a cracking design, and this dinky Lego set makes a great addition to any collection. It’s smaller than past Lego versions of the ship, but also includes an Imperial speeder bike and interactive turret that can fire ‘laser’ discs for some added fun.

Head-to-head: These are the best 2-player board games

With it, you get a snowtrooper, which is surely the most underrated design of all the Empire’s soldiers, and Wedge Antilles, who is of course the true hero of the Rebellion. This is a great set for kids that not only gives them a ship to play with, but two to use together. 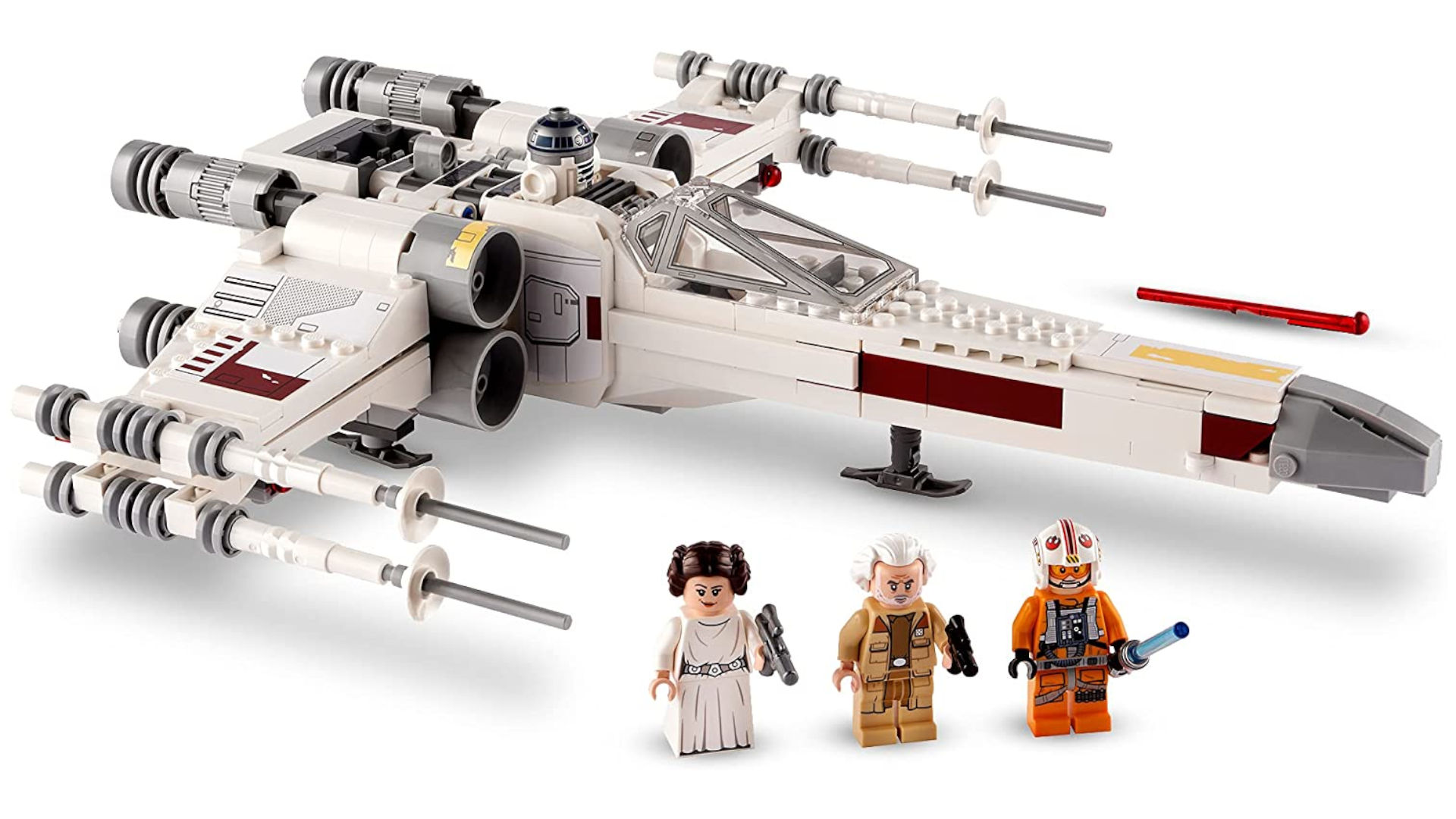 We couldn’t create a list of the best Star Wars Lego sets without including at least one X-wing. The classic starfighter of the Rebellion, it was there when the Death Star blew up (and was there again for the second go-around), it was there when Luke was training on Dagobah (although spent most of its time submerged in a swamp), and cropped up in background shots throughout the original trilogy.

At a relatively low price tag, this 2021 set is a fabulous model of the ship that won’t empty your wallet. It’s certainly a better option than the Ultimate Collector’s Series X-wing, unless you happen to have lots of spare cash lying between your sofa cushions. Add to that the Luke Skywalker, Princess Leia, R2-D2, and General Dodonna minifigures, and you’ve got quite the collection of Rebellion heroes, too. 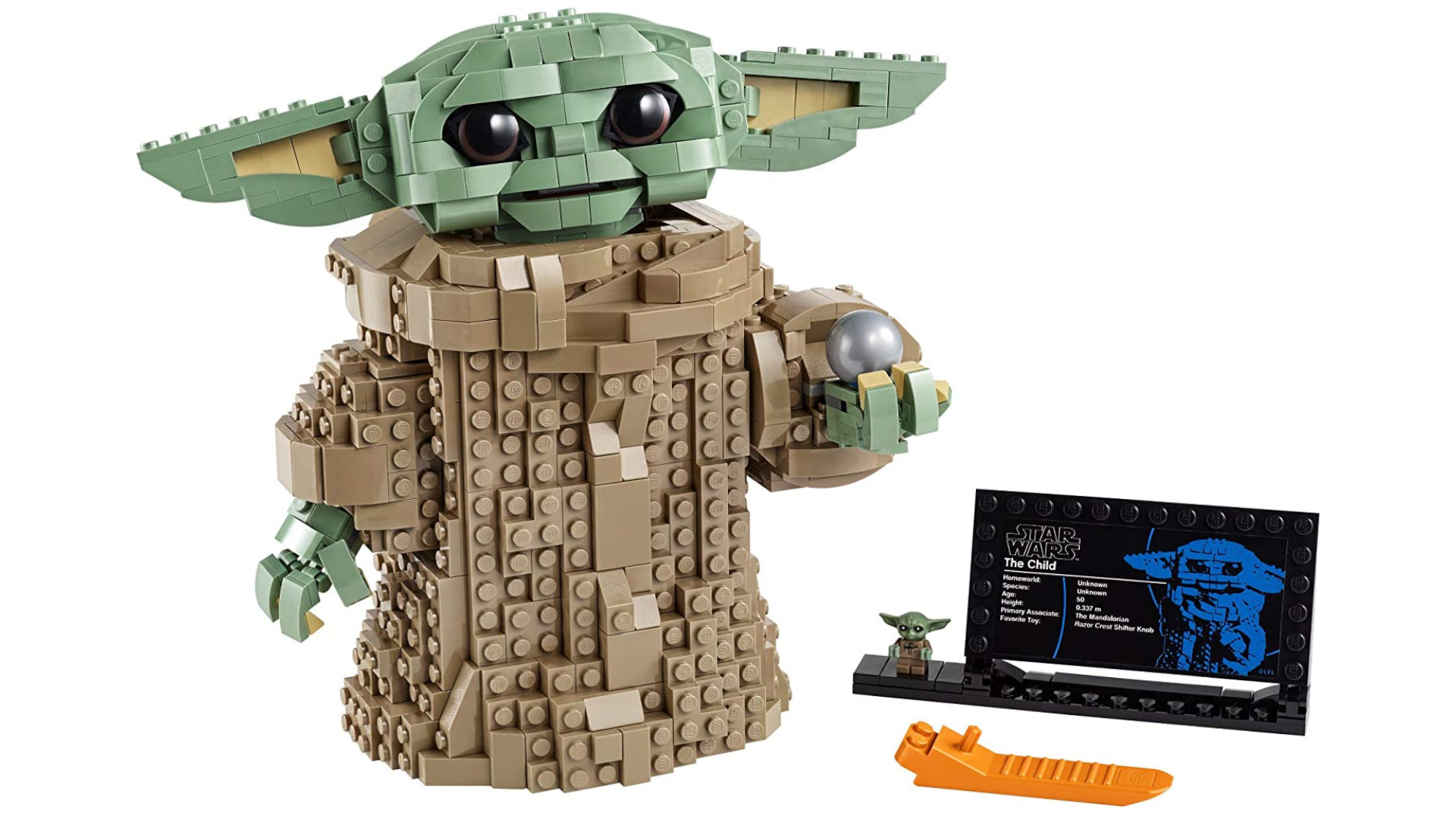 Everyone’s favourite force-sensitive infant, Baby Yoda, or The Child as they’re properly called in The Mandalorian, is arguably the cutest, greatest thing to ever come out of Star Wars. This 20cm-high model captures most of the cuteness with its big, beady eyes, chubby cheeks, and wide mouth. It’s poseable, too, letting you move its ears, head, and mouth for different expressions.

Internet sensation: Here are the best online board games

Coming in at over 1,000 pieces, this isn’t a small set and works as a brilliant display piece. But it’s also not overly large, so won’t take up a huge chunk of desk or shelf space. We all know who this set is targeted towards: that person in your life you can’t stop watching gifs of Baby Yoda and think their adorable smile is the best thing to come out of Star Wars since podracing. 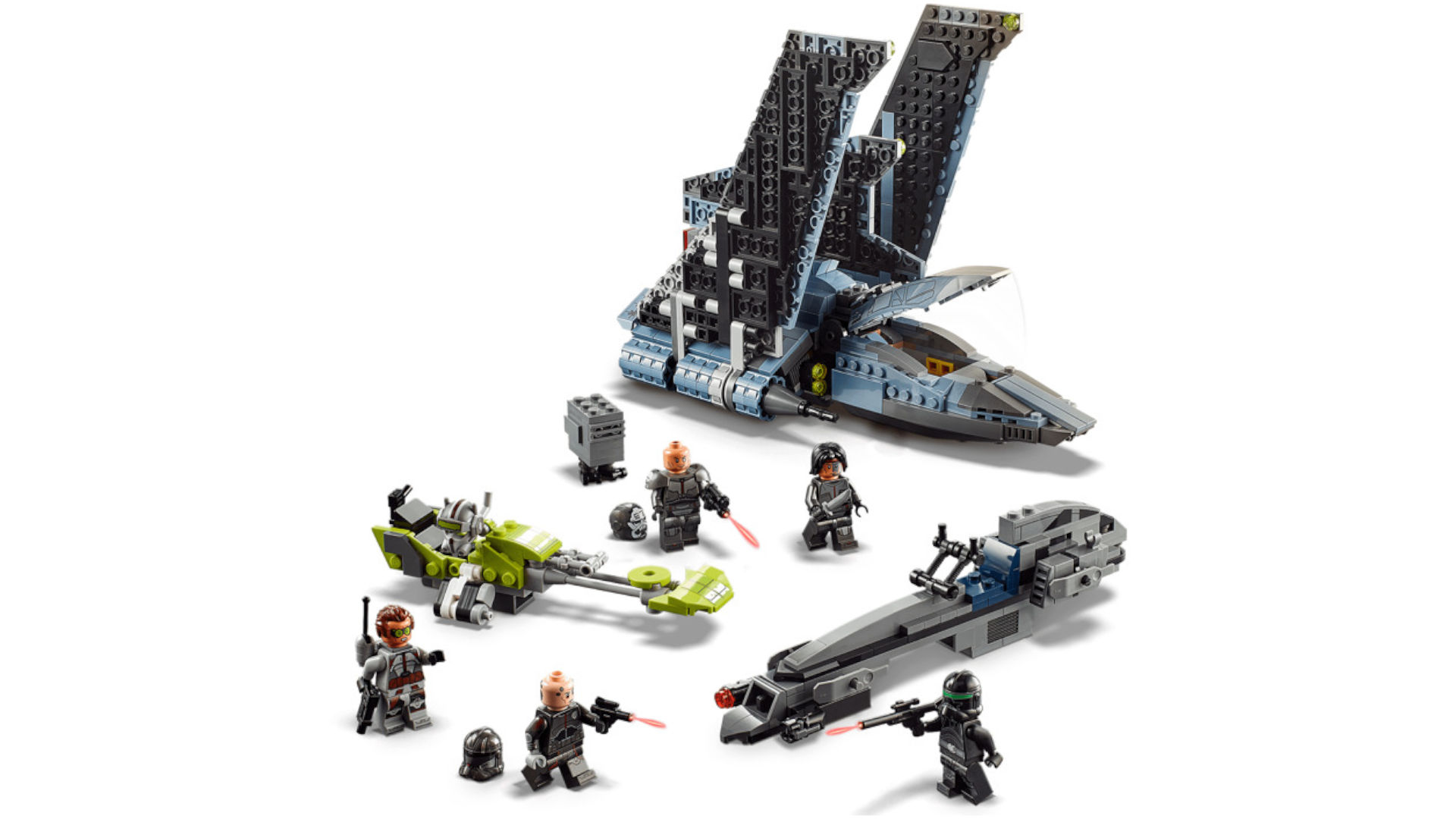 A spin-off from Star Wars: The Clone Wars, The Bad Batch animated series hit Disney+ in mid-2021. Aside from giving us another look at the Republic’s elite troopers in the aftermath of the Clone Wars, it also brought with it a couple of striking new ships.

The Bad Batch Attack Shuttle has virtually everything fans of the show could want: a model of the main ship with adjustable wings and hidden compartments, two speeder bikes, and minifigures of the whole squad: Hunter, Wrecker, Crosshair, Tech, and Echo. It’s something of a premium set, but looks like no other Star Wars Lego kit. 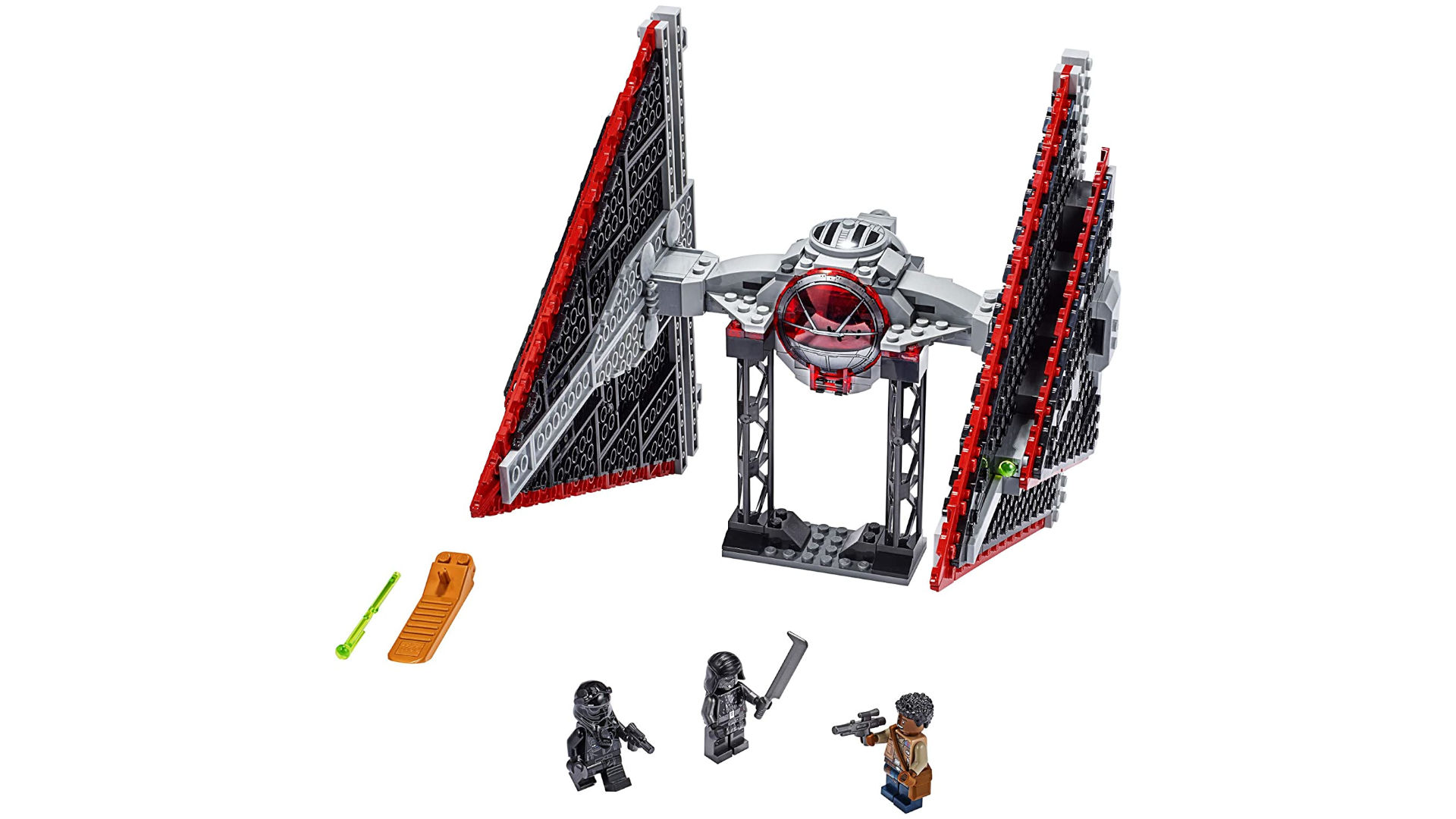 You can never have too many TIE Fighters. A brilliant addition to any Star Wars Lego collection, whether you’ve only got a few Stormtroopers to your name or have an Ultimate Collector Series Millennium Falcon sitting on your coffee table, this Sith TIE Fighter released to coincide with The Rise of Skywalker is a little different from the rest.

Raise the stakes: These are the best free card games

Not your standard twin-winged ship, it also comes with a Finn, First Order pilot, and Knight of Ren minifigure. Particularly brilliant, however, is the included stand. It sounds minor, but being able to dock the ship for display will save you a lot of hassle when trying to balance it, as well as frustration if you were to trip over it.