Looking for the biggest Lego sets? Lego bricks might be small, but the creations made using them are mighty. Over the years, some absolutely humongous sets have been released, combining thousands of the tiny plastic pieces into gargantuan models. And their sizes have only become larger, with ever-more impressive structures releasing onto shelves.

We’ve created this list of the biggest Lego sets ever produced. Some are historical sets from Lego’s Creator Expert line, which imitate mammoth buildings from the real world, while others are part of Lego’s licensed or original lines, and bring huge fictional locations to life in miniature brick form.

Before we begin, keep in mind that we’re measuring a Lego set’s size by the number of pieces it contains, not merely its physical dimensions. And once you’re down reading about the largest Lego sets to ever release, why take a peek at our pick of the best Star Wars Lego sets knocking about. There are some stellar picks to choose from.

These are the biggest Lego sets: 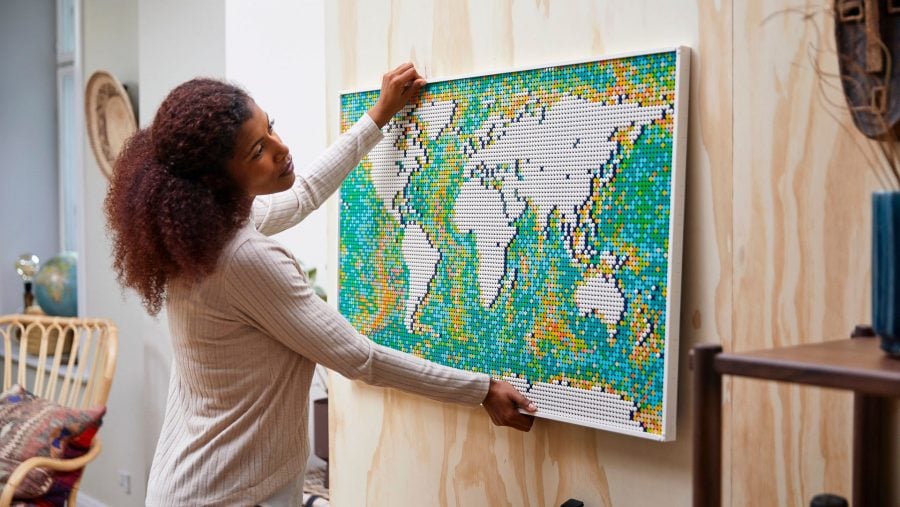 Released in June 2021, the Lego Art World Map contains 11,695 pieces, making it the biggest Lego set ever made. More a piece of home decor than it is a simple model, it’s over one metre wide, and is designed to be built in a colour combination of your choice. You can paint the oceans of the world in pastel colours, create patterns in the seas, or build a monochrome map.

Using a nifty system of connectors, you can even choose which continent lies at the map’s centre. But it’s not only something to look at. Mark your travels across the globe by dotting small, coloured pins on the countries you’ve visited, or listen to the included soundtrack to take an audio tour. 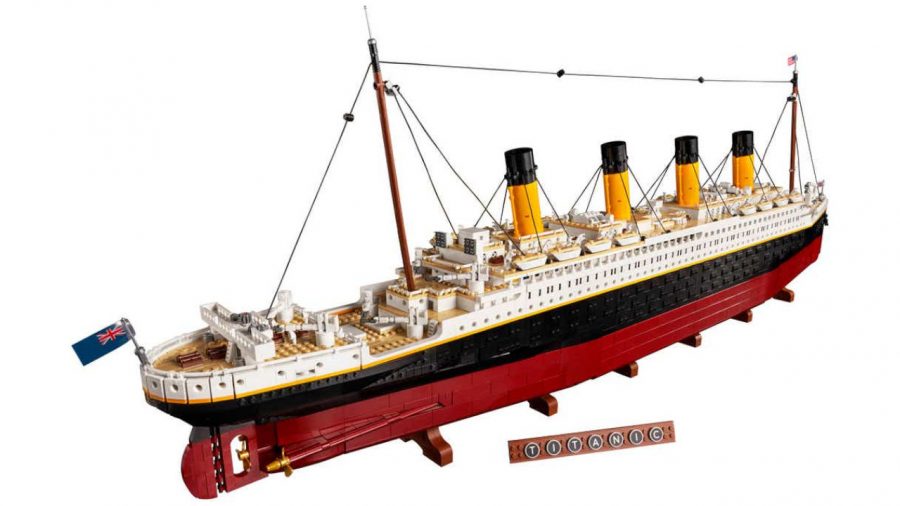 Another 2021 release, the Lego Titanic is made of 9,090 individual pieces. Although a little smaller than the real ship, it’s no less impressive, and its 135m length makes it the longest Lego set ever released.

Cardboard classics: These are the best board games of 2021

Aside from showcasing the Titanic’s major external features – main deck, four smokestacks, and even its swimming pool – it also includes a detailed cross-section of the ship, letting you view the grand staircase and boiler rooms inside. With an adjustable anchor and moving engine, this is one of the more interactive big Lego sets. 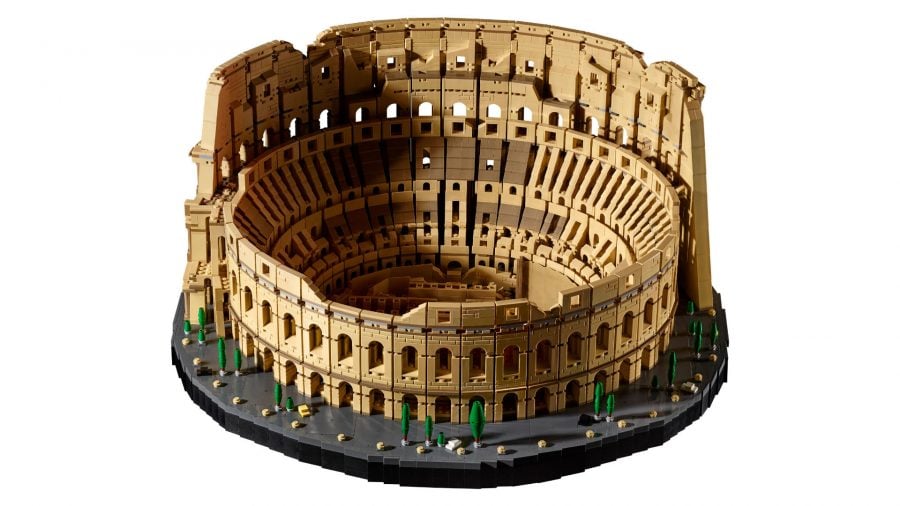 Is any monument of history more impressive than the Colosseum? Probably not. Is the Colosseum more impressive when made out of Lego? Quite possibly. At 9,036 pieces, this model only just comes under the Titanic, but its detail of the historical Roman ruin is unmatched.

Its perimeter includes several shades of Lego brick to capture the changing colour and age of the amphitheatre, while several sections can be removed to reveal the hidden passageways beneath the arena’s floor. Just the shape of the model makes it truly impressive to behold. 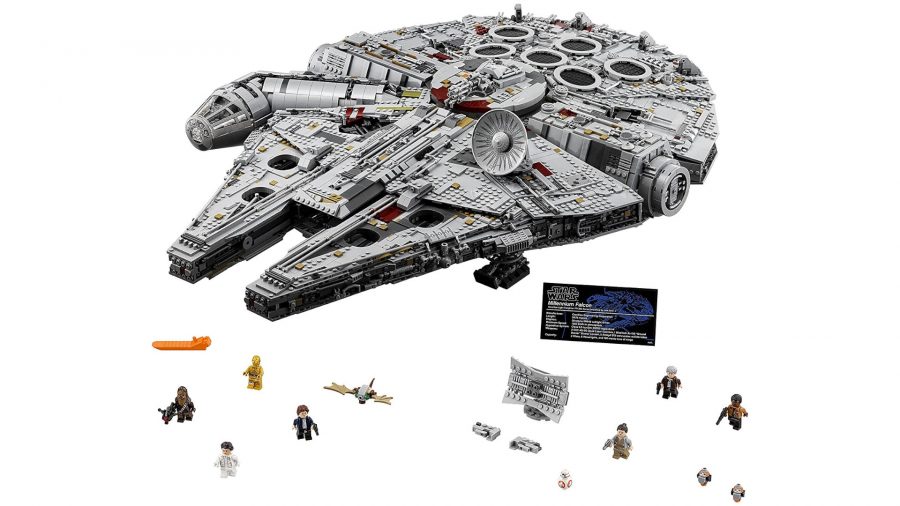 On its release in 2017, the Ultimate Collector Series Millennium Falcon was the largest and most expensive Lego set ever produced. Now, its 7,541 pieces might pale in comparison to the sets above, but its detail is no less impressive. This is Han Solo’s light freighter like you’ve never seen it before.

We called it one of the best Star Wars Lego sets ever produced, and it’s not hard to see why. Every inch of the model is baked in detail, whether than the removable hull panels, interior engine room with added hyperdrive, or the main cockpit. This isn’t just a large Lego set, it’s a homage to the most iconic spaceship in all of science fiction. 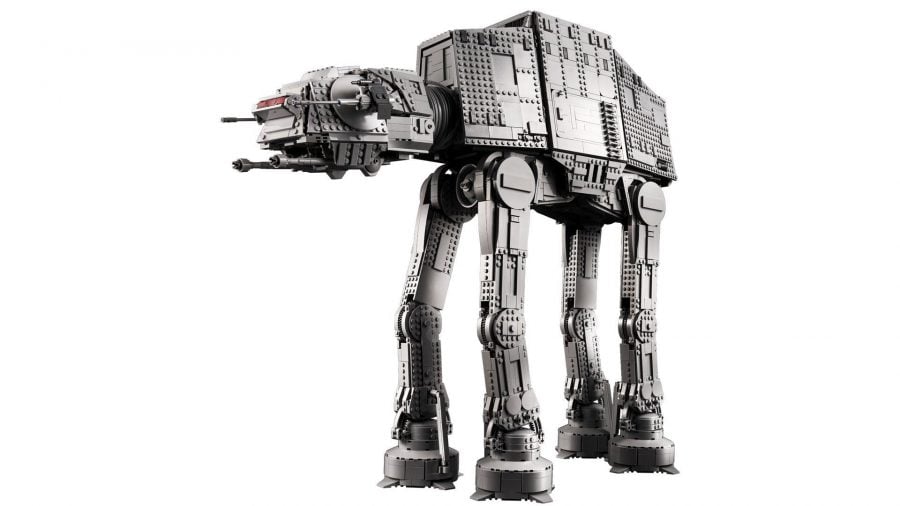 Another Star Wars Lego set, the AT-AT has plonked from the icy plains of Hoth and into our hearts. At 6,785 pieces, it’s quite a bit smaller than the Millennium Falcon in terms of sheer bricks, but a /lot/ taller. Standing 62cm off the table, it’s also fully posable, making it one of the largest and, surprisingly, most agile sets out there.

What’s most impressive about this set, however, is its relative scale. It’s almost a perfect fit for the ordinary Lego minifigures, and the crew of Snowtroopers and pilots that come with the model only reinforce its gargantuan size. To see Luke Skywalker tangle below the AT-AT’s hull on a cable makes you realise what the Rebellion was up against. Plus, 40 miniatures can fit inside the walker’s hull, making it a real miniature mover. 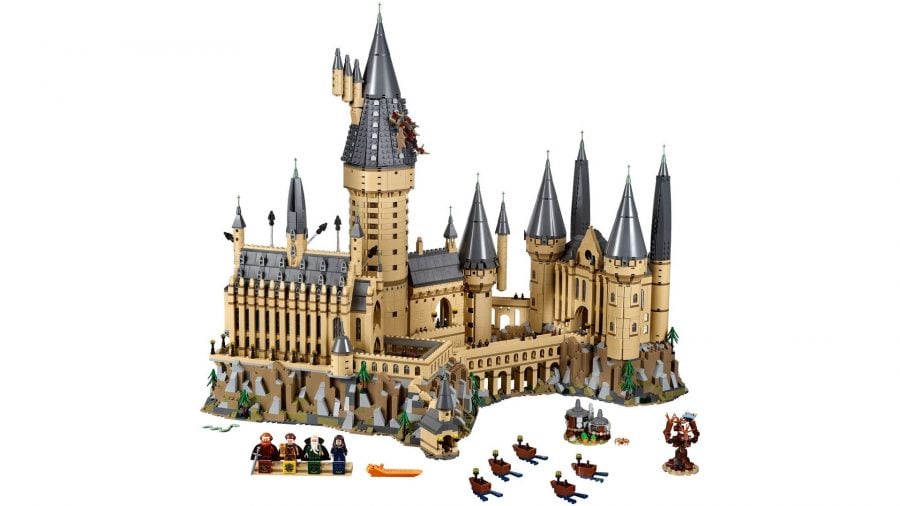 Although packing 6,020 pieces, the most interesting aspect of the Lego Hogwarts Castle isn’t how many bricks are in the box, but the scale of the model they’re used to build. A micro-scale model, that’s built to fit tiny figures instead of the usual minifigure size, Lego’s cottoned on to a neat trick here; don’t create a humongous Hogwarts, build a medium Hogwarts and simply scale down the people inside.

Games for pairs: These are the best 2-player board games

It pays off, though. The set captures all the majesty of the famous fictional castle, containing several classic locations of the franchise: the Great Hall, the Whomping Willow, Hagrid’s Hut, and the Chamber of Secrets. This is Harry Potter at its best. 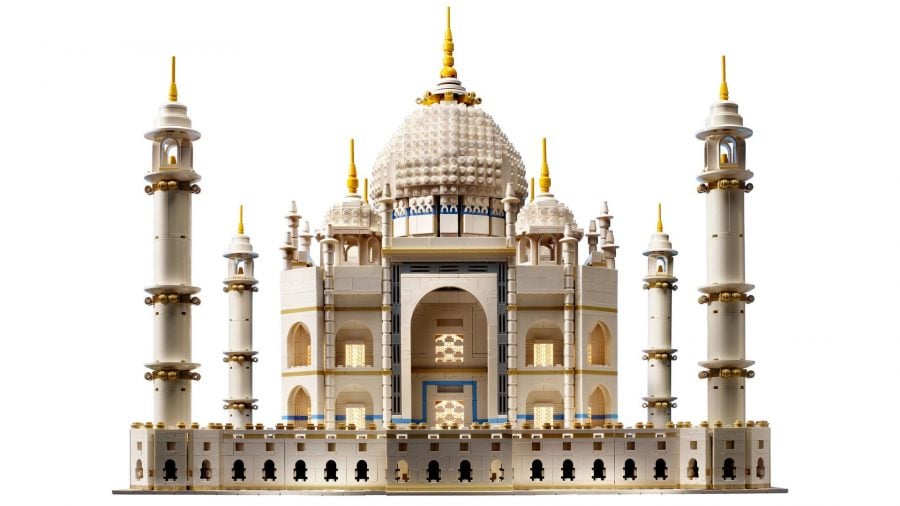 Between 2008 and 2011, the Lego Taj Mahal was the biggest Lego set of all time. Packing 5,923 pieces, it’s still a mammoth build even now. Symmetry, majesty, and an absolutely cracking dome at its centre, the Lego design team sure know how to pick them. The Taj Mahal works brilliantly as a Lego set.

You won’t find it in any stores, however. After briefly reappearing in 2017, the set was discontinued. Look for this one in second-hand stores. 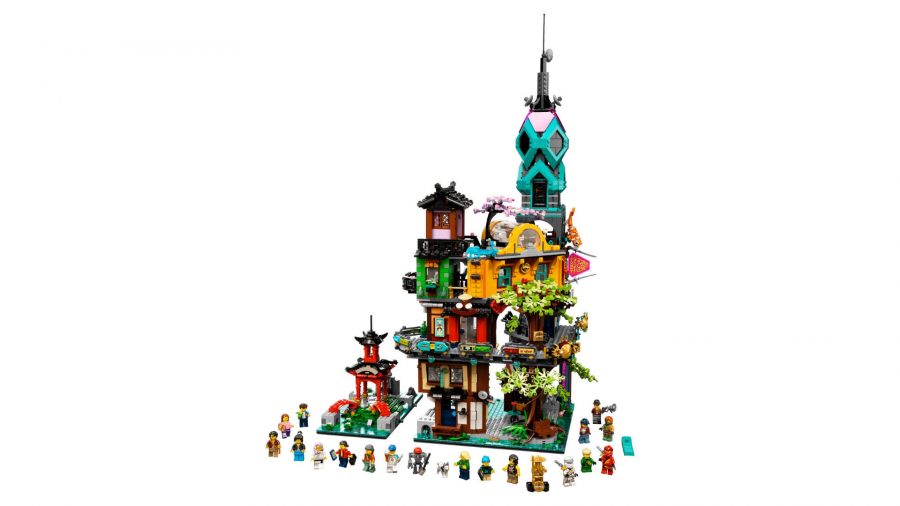 Released in early 2021 in celebration of Ninjago’s tenth anniversary, the City Gardens is a three-story slice of Ninjago City that contains many of the characters and locations fans will be familiar with from the Ninjago cartoon. And that’s the main draw. Ronin’s pawn shop, Chen’s noodle house, and even a history museum are collected inside.

Quick on the draw: Check out these free card games

This set is really a love letter to the Ninjago franchise, but also pairs with the other modular Lego sets in the series, connecting into one, massive street. It’s made up of a total of 5,685 pieces. 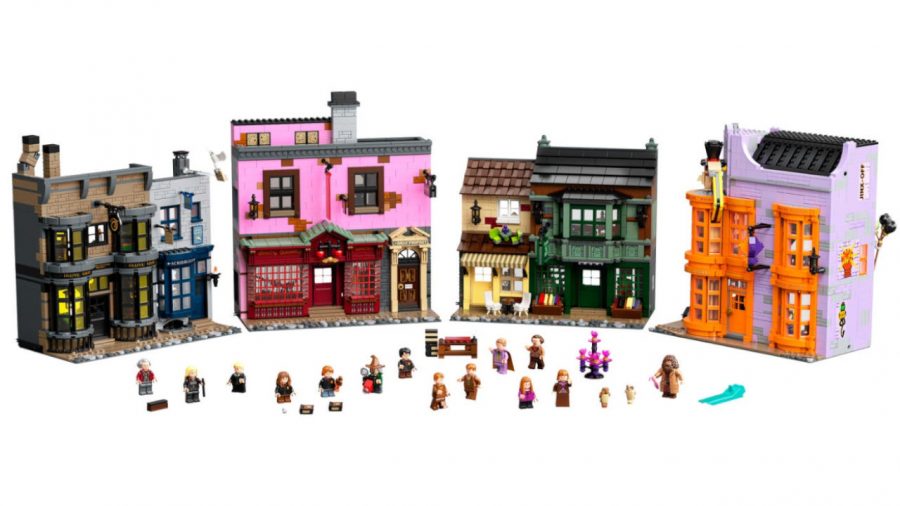 Windows are decorated with displays, every nook is full of colour, and minor details pepper the buildings’ interiors. There are plenty of optional ways to construct the set, including creating an actual alley, or fitting the shops alongside other modular Lego sets to add a slice of the fictional to your dioramas. 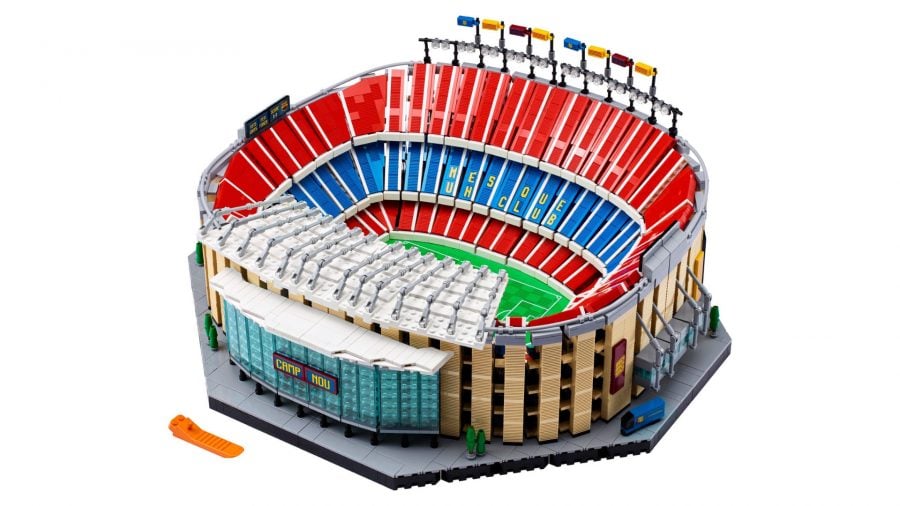 The only Lego sports set on this list, Barcelona Football Club’s stadium makes quite the model. Coming in at 5,509 pieces, it’s no small fry, but includes every possible detail you could think of: the stands, the press room, the player tunnels, and even a miniature team bus.

Cards galore: These are the best trading card games

Not the only football stadium Lego has created, but definitely the largest, Camp Nou is a sight to behold.