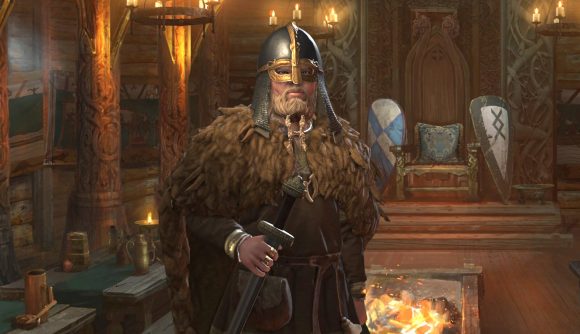 Crusader Kings 3 is many things: an intricate grand-strategy videogame, an abundant supply of emergent storytelling, and a freeform sandbox in which you can intentionally create a dynasty of inbred despots and still successfully conquer Europe. Add one more entry to that list, however, as some fans have found the game can also serve as a nifty portrait creator for tabletop RPGs.

As pointed out by Twitter user John Wordsworth earlier today, Crusader Kings 3’s integrated ‘ruler designer’ is a particularly useful way of generating characters to use in tabletop campaigns. Letting you customise your ruler’s physical attributes – including their hair, height, facial features, and weight – from a wide selection of tweakable assets, you can quickly whip up a 3D character model, and snap a picture of their portrait to boot.

The idea is that players or GMs who might struggle to draw characters and NPCs can easily generate 3D renders instead. A lovingly produced digital image of your king might serve as a better representation of your adventurer than a few squiggly lines and some half-arsed pencil shading.

You can even change their clothing and accessories, dressing them in robes to make them look wizardly, gowns that are fittingly monarchical, armour to suit the Paladin of the party, or simple rags if their last encounter didn’t go their way.

Throw in the Fullscreen Barbershop mod, which we previously highlighted as one of the best Crusader Kings 3 mods around, and you’ll even be able to pose your ruler, rotate them, or add a fitting background for some atmospheric flavour. Use the Community Flavor Pack mod, too, and you’ll have a bounty of chic accessories to dress your character with, spanning many of the cultures that aren’t given thorough exposure in the base game.

Given Crusader Kings 3’s medieval setting, its ruler designer will probably only be useful for those running a D&D campaign, or roleplaying in another fantasy title. But we’re inclined to agree with the Paradox Interactive Twitter account in calling this little tip “genius” – it sure does seem like a swish workaround for those of us lacking skills in the art department.

Check out our pick of the best Crusader Kings 3 mods for more ideas on how to shake up your medieval, or read our list of the best tabletop RPGs if you’re looking to expand your collection.