The Wild Beyond the Witchlight might be D&D’s silliest adventure. Singing mushrooms, anthropomorphic frogs, and all manner of carnival capers fill this fairytale-inspired romp. Wild characters lead your party down the nooks of a whimsical world, and new delights are thrown up at every turn. This is an adventure that isn’t afraid to lean into the theatrical, or embrace the vaudeville of tabletop RPGs.

But, like the stories of the Brothers Grimm from which it so clearly draws inspiration, there’s a macabre underbelly to The Wild Beyond the Witchlight. Between all the silly encounters are workshops of kidnapped children, toxic marshes that slowly devour their ailing inhabitants, and wicked curses of malevolent hags. Its mix of sinister evil and jovial fun extends far beyond the usual swords-and-sandals fare, and makes this adventure one of the more engaging D&D supplements of recent years.

Fair warning, though, I won’t be holding back any details. So if you’re thinking of playing this adventure rather than DMing, you’re probably best to look away now. 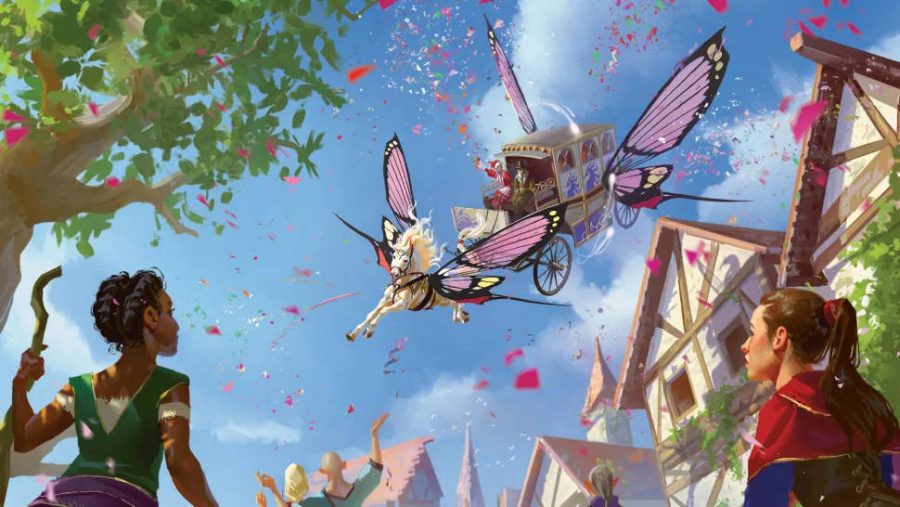 The Feywild – a scrumptious setting

Witchlight will take you through the faerie-filled Feywild. Touched upon many times in past iterations of D&D, Witchlight is the first book to fully introduce the setting to Fifth Edition – and it’s quite the introduction. Steeped in magic, the realm is a vast wilderness, full of wild inhabitants and mysteries to explore. Controlled but not tamed, it’s a setting ripe for wide-eyed discovery, and plays directly into that childhood rush of exploring a new place for the first time, unsure what delight you’ll see around the corner.

The Feywild is ripe for wide-eyed discovery

You won’t have the entire plane at your disposal, though. Witchlight focuses on the single domain of Prismeer, a fairly typical Feywild location that’s been corrupted and fractured into three realms by a coven of hags. Hither is a noxious swamp, Thither a forested realm controlled by a wicked ‘granny in the woods’ character, and Yon a mountainous region with an oppressive environment. Sitting at the centre of them all is the looming Palace of Heart’s Desire, which acts as the climax of the adventure.

Each realm follows a similar template: arrive in the location, run into some disturbance that’s inevitably linked to the realm’s ruling hag, deal with the many obstacles and tricks thrown your way, before finding yourself in the hag’s lair. It’s kept fresh by a variety of encounters and differing levels of danger. Persistent plot points connect each realm to the wider story, and a constant supply of new characters – both friendly and fiendish – ground the adventure in the here and now. 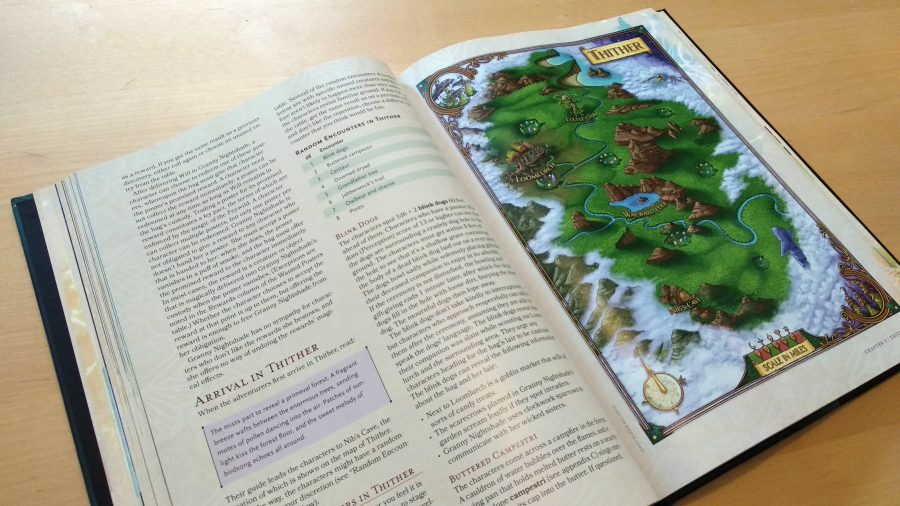 It adds up to a thoroughly engaging world. As you travel the realms, their depth of corruption is gradually revealed, and the sinister horrors that lurk under their magnificent veneer unravelled. It does well to capture that sadistic appeal of fairy tales; the disturbing excitement of finding out Hansel and Gretel didn’t actually escape the witch, as your parents might have told you, but ended up in her oven instead.

But players won’t actually reach the Feywild for some time. The first quarter of the adventure is set in the book’s cover location: the Witchligth Carnival. A travelling funfair full of attractions and entertainers, it acts as the adventure’s tutorial area and caters to new players exceedingly well. There’s little danger to the player characters, most NPCs you meet will greet you with a wide grin, and there’s plenty of opportunities to get to grips with D&D’s basic roleplaying mechanics without the fear of substantial consequences. 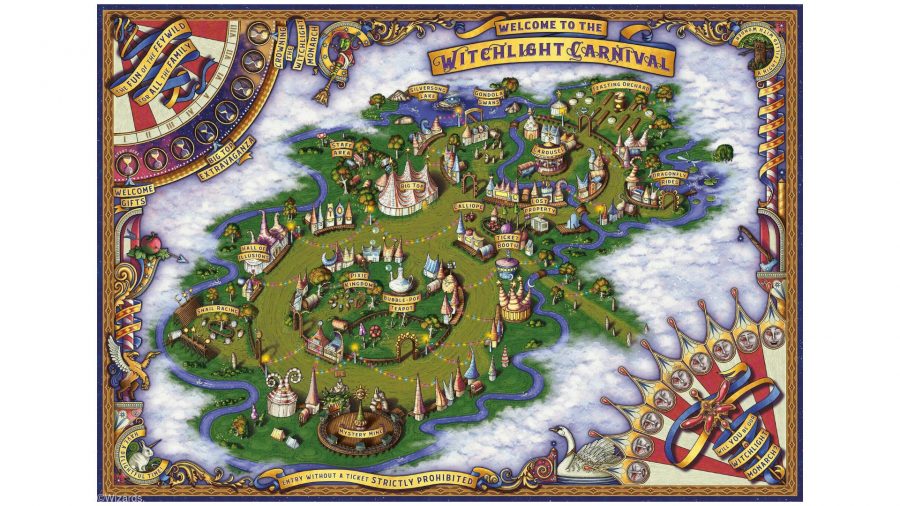 You can interact with the Carnival’s attractions – such as racing giant snails around a track, or trying to outstare a cyclops – and investigate the various rumours of the staff. One poor fellow had his voice stolen by a thieving Kenku midway through a marriage proposal, so is forced to become the Carnival’s resident mime. Another halfling will be seduced to enter the Feywild by a hag’s minion if your party can’t intervene in time.

It’s all very charming, and does a wonderful job of setting up the book’s whimsical foundations. What’s better, many of your decisions taken here will influence the larger adventure to come. 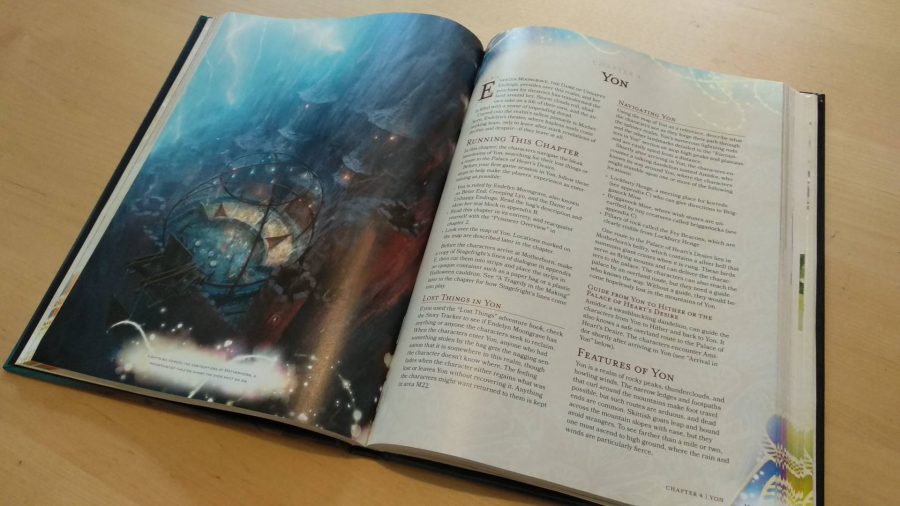 The Wild Beyond the Witchlight hands you two adventure hooks to choose from. On the first, characters venture into the Feywild to uncover some personal attribute that was stolen from them as a child – all fittingly surreal, of course, such as their ability to smile, or their sense of direction. The second has you investigate the disappearance of Prismeer’s resident Archfey on behalf of a doddering Warlock.

Both follow virtually the same path and only significantly differ in how a couple of NPCs will interact with the party. Starting small, in that tight Witchlight Carnival, the adventure gradually spirals into a grander story, as hidden characters emerge and strange mysteries come to light. By the book’s final act – which is entirely missable if the characters choose not to pursue its thread – its scale is nicely elevated, and fitting for player characters who have advanced from level one to eight.

Fans of D&D’s lore are in for a bit of a treat, too. Iggwilve the Witch Queen (called Tasha in titles of other sourcebooks) makes more than a fleeting appearance, and Kelek and Warduke of the ‘80s D&D cartoon series are involved for more than just a half-hearted cameo. 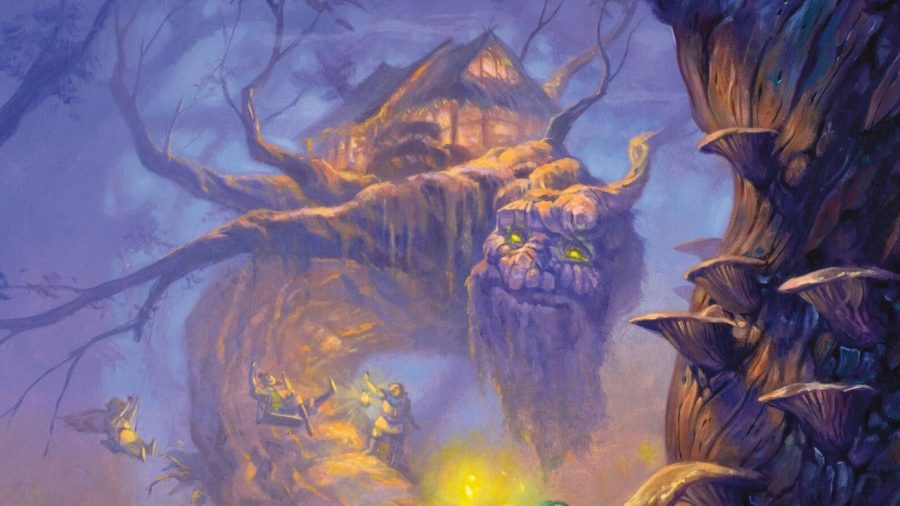 But really, it’s the set pieces that make the adventure so exciting. In one realm, a Treant with a cabin on its back housing a group of runaway children greets you in the forest. In another, a hot air balloon is seen careering through the sky before crashing into a stone tower. They’re well designed to direct your adventuring along a set path, while providing scope for wild experimentation. You know when and where the Witchlight Monarch will be crowned in the carnival, for instance, and are handed a wealth of characters and resources with which to approach it.

The adventure never slows down. Witchlight dispenses with some of D&D’s most cumbersome elements, which could decelerate it and suck the momentum from your quest. There’s no need to spend time foraging for food (the Feywild is rich with delicious vegetation), and the random encounters are more varied than simply different forms of combat scenarios.

Build your character: Our pick of the best D&D character creators

It helps, too, that the book places such emphasis on roleplay. The entire story can be completed without resorting to combat or killing. Sometimes you’ll have to spend longer on a side quest to complete the pacifist option, while other times you’ll need to say the right things at the right time, and piece together the adventure as you go.

You’re helped along by a wonderful ‘story tracker’ at the back of the book, for the player or DM to record information. It’s a minor addition, but helps focus the adventure as a complete experience, rather than a collection of consecutive encounters. 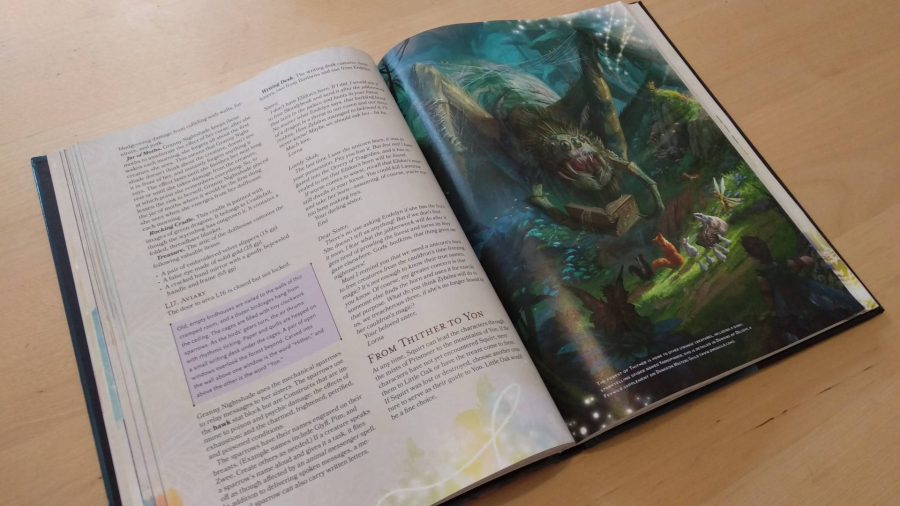 But alongside the story tracker and Witchlight Carnival tutorial area, The Wild Beyond the Witchlight simply does a sterling job of easing new players into the game. A section of ‘tips for new Dungeon Masters’ at the beginning of the book provides a useful rundown of how to read the adventure, how to run it for a group, and when to share story and combat information with players.

Add to that the 32 ‘roleplaying cards’ (small flashcards with essential information about how to represent various characters), and you’ve got a book that’s uncommonly easy to pick up for new players and DM’s alike.

The Wild Beyond the Witchlight might not be your typical D&D adventure, but it’s all the better for it. Embrace its theatrical whimsy, lean into its creative roleplay, and approach it with the childlike thirst for discovery that it deserves, and you’ll be plunged into a world that’s half magic, half mystery. Few D&D adventure books have made me want to immediately play them after reading. But this one certainly has.