Looking for the best D&D character creator? Building a Dungeons and Dragons character can be tough. Traipsing through the Player’s Handbook to choose a class, pick a race, assign ability scores, min-max a build, and create a roleplaying background: that’s a lot of work. For new players especially, starting a D&D campaign with character creation can feel like little more than a chore.

That’s why you need a D&D character creator to do the hard work for you. Streamlining the whole process, the online tools take the number crunching out of your hands, so you can focus on the fun stuff.  Make your selections, and don’t worry about tracking all the numerics or gritty details. They’ll even compile your choices into a tidy character sheet, so you can get straight into adventuring.

We’ve compiled all the best D&D character creators into this neat list. All of them are simple, use 5E rules, are visually pretty snazzy, and – the best bit – are free to use.

These are the best D&D character creators: 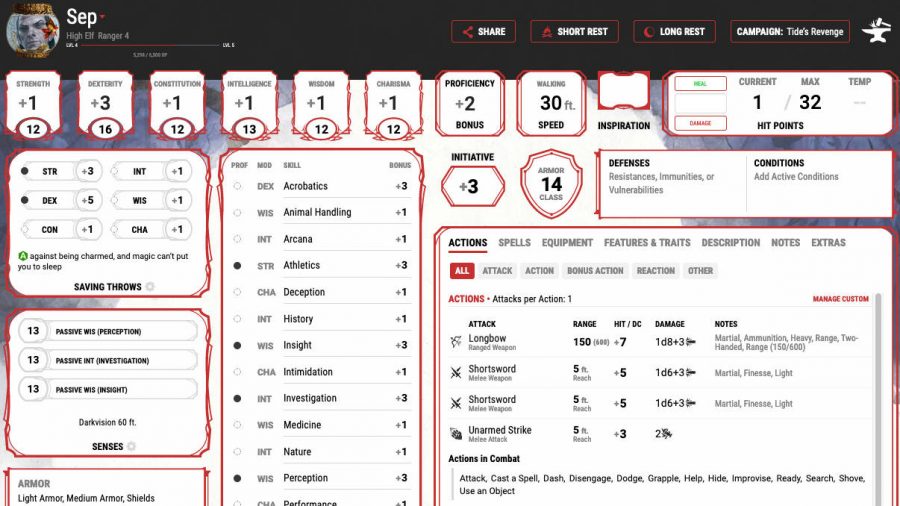 By far the most expansive option, D&D Beyond’s integrated character creator is likely to offer all the choice, guidance, and customisability you’ll need. Part of Wizards of the Coast’s official D&D digital toolset, it’s free to use (requiring only that you create a D&D Beyond account), and includes all 5E material that can be freely accessed under the game’s Open Games License.

From a player’s perspective, that means all classes (now including the Artificer), each with at least one subclass, all standard player races, along with a couple of extras thrown in, are available for free.

Rigorous warrior: These are the best D&D character builds

If you want to use material from other D&D sourcebooks, you’ll need a member of your D&D Beyond campaign to have purchased it through the platform, and share it with the rest of the party. But even if you want to take the wholly free route, D&D Beyond’s character creator is still a rosy option.

Each step is presented intuitively, new players can use tooltips to navigate the choices, and generic game options, such as selecting a leveling system or encumbrance options, can be fine-tuned to keep track of your character’s progression in whatever level of detail feels right for your game. Rules are automatically accounted for, so you can sit back and let the computer do the number crunching. 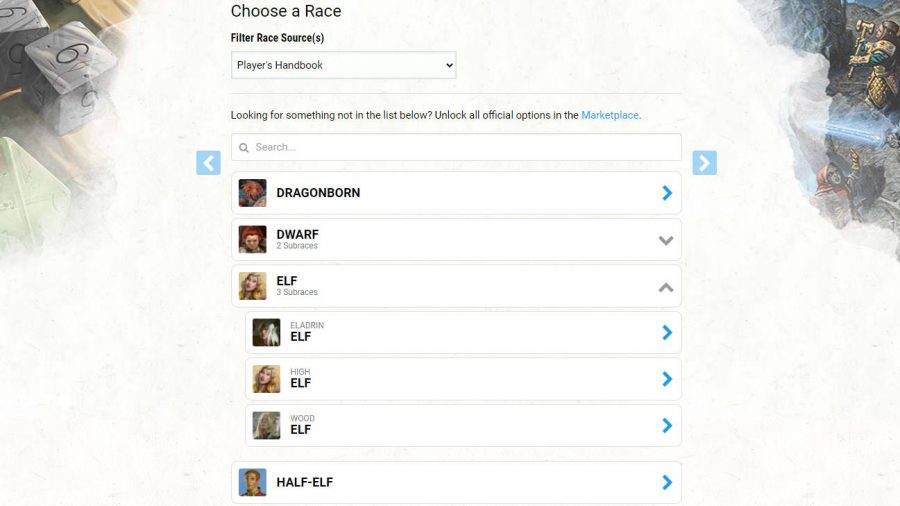 And if you’re totally new to D&D, you can even use the Quick Build feature to whip up a competent adventurer in a flash. Select a class, pick a race, and choose a name – that’s it. Perfect for some speedy roleplaying.

If you’re not going to be holding your sessions online, character sheets can be exported to fillable PDFs, or integrated into a Roll20 campaign (using this handy browser extension). But it’s D&D Beyond’s digital character sheets that really shine. Ergonomic and interactive, every ability score, every skill, and every section is clickable, bringing up a panel explaining their rules, and application in-game. And it cuts out the need for physical dice, too. Click on an ability score or skill, and a virtual dice will roll on screen, sharing its score in the central log for all your fellow adventurers to see. 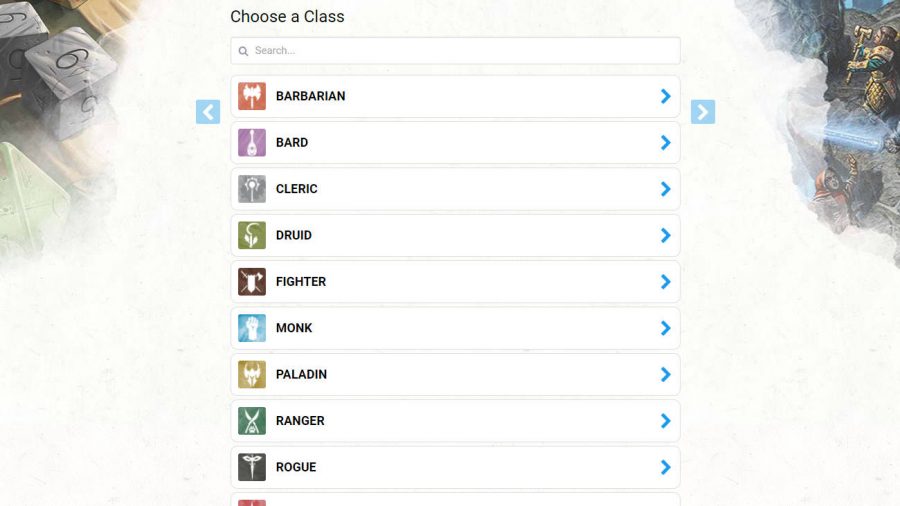 There’s also the option to create and use homebrew content when building a character. D&D Beyond lets you add your own subclasses and races, particularly useful if you’re keen on expanding your campaign beyond official sourcebooks, or want to use the official D&D content you own in a physical format, but haven’t bought it digitally. Manually enter a class’s stats in the homebrew panel, and it’s as if they’re available to you as the real deal.

There are some limitations, however. Feats aren’t available to players who haven’t bought, or don’t have access to, the digital PHB, and, as you progress, you’ll need to spend some cash to unlock the character creator’s full features. But if you’re only looking for a means of building a level one character, and won’t be recording their progress through D&D Beyond’s automatic leveling system, you’ll be missing out on nothing. 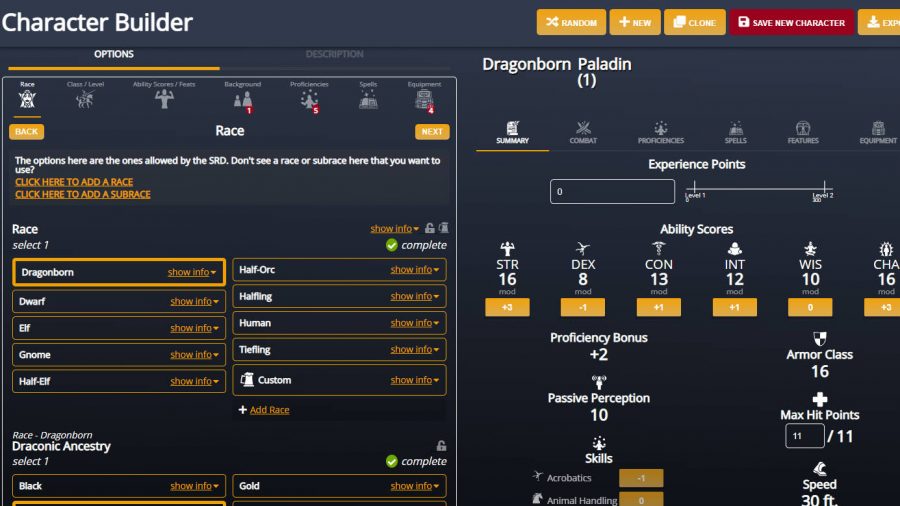 Dungeon Master’s Vault isn’t as replete as D&D Beyond, but it’s useful for players who know what they’re doing, and are simply after a quick set up. Particularly handy for homebrewers – with options to add complete custom subclasses, races, and backgrounds in a few clicks – it automates everything in a tidy array.

It also gives short descriptions of each option, and their influence on your characters’ stats – which will come in handy if you’re playing a class or race you’re not so familiar with.

Start adventuring: How to play Dungeons and Dragons

What makes this character creator stand out, however, is that it builds your character in real-time. As you’re picking skill proficiencies, or weighing up two subclasses, you can easily see how the choices will influence your modifiers and ability scores at a glance. It’s especially useful if you have a particular character build in mind, or are trying to min/max your character with optimum efficiency.

And for new players, it also offers the “character builder for newbies” option, stripping away all the usual D&D jargon, and replacing them with several generic questions. The idea is that you don’t need to know anything about D&D to use it, but can have a vague understanding of fantasy tropes, pick some general character cues that sound like fun, and it will do the leg work for you. 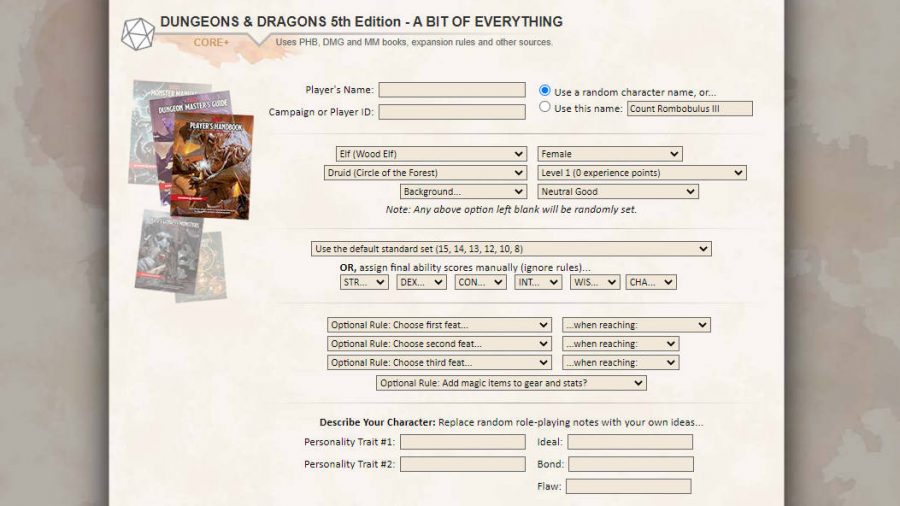 If you’re looking to waste no time, know exactly what you’re doing, and just want a quick means of automatically compiling a stat sheet, look no further than Fast Character. A web page solely dedicated to creating D&D characters, it’s, as you might expect, mightily speedy and massively streamlined.

Use the dropdown menus to select all the essentials, add any feats that your character has acquired, write some roleplaying notes if you’re so inclined, and, hey presto, you’ve instantly got a spiffy sheet. Although it automatically calculates your character’s stats, Fast Character doesn’t track progression, nor is it intended to guide you through the creation process.

Accessible options: These are the best D&D character sheets

If you’re familiar with D&D, or have the PHB sitting in front of you, Fast Character is a useful way of creating your character digitally. But it’s not great for learning how to do so, and isn’t beginner-friendly.

Spanning the contents of a good few additional sourcebooks, Fast Character includes a lot of subclasses outside of the PHB, but there are a few restrictions to its use. Rough and ready, it can’t cope with multiclassing, and won’t display a spell list for any magic users, so you’re going to have to keep track of these elsewhere. Use it if you need to quickly create a digital sheet for a new or existing character. 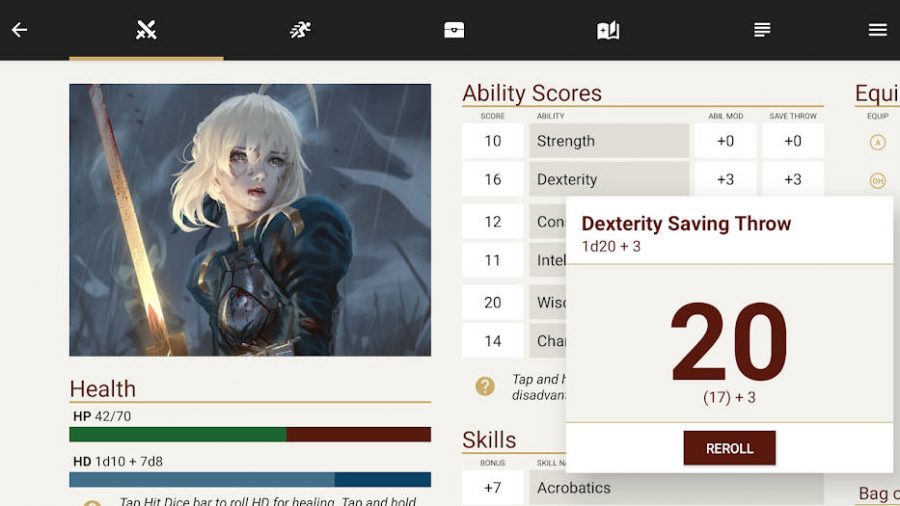 Often, you’ll want your D&D character sheet to be portable. No one wants to lug a laptop to their weekly roleplaying session just so they can read character stats off a screen. To save you some hassle (and back pain) try creating your character on your phone. You’ll be able to whip it out whenever you need it, and impress any passer-by with your incredibly optimised Sorlock build.

For a D&D character creator app that’s smooth and complete, we recommend Fight Club 5th Edition. It’ll whizz you through creation in a tight walkthrough, before serving up a nifty character sheet that’s compact and interactable. As well as tracking your stats, equipment, and spell slots, you can also use it as a dice roller. Tap on any ability score, attack, or skill to instantly make a check. The app will automatically include all the relevant proficiencies and bonuses in the calculation, too.

Pick you fighter: Read our guide to the D&D classes

Bear in mind, Fight Club 5th Edition only contains material that’s free to use under D&D’s Open Games License – which doesn’t even cover the full PHB. However, the app does include the function to add your own content or download entire compendiums of user-made resources online. A quick search will show numerous resources for adding homebrew material to the app, so you shouldn’t be left wanting.

If you know you’ll be playing D&D at several friends’ houses, or will be switching between game stores, this is a handy tool. Pack everything you need on your phone, and you’ll be able to play wherever, whenever. 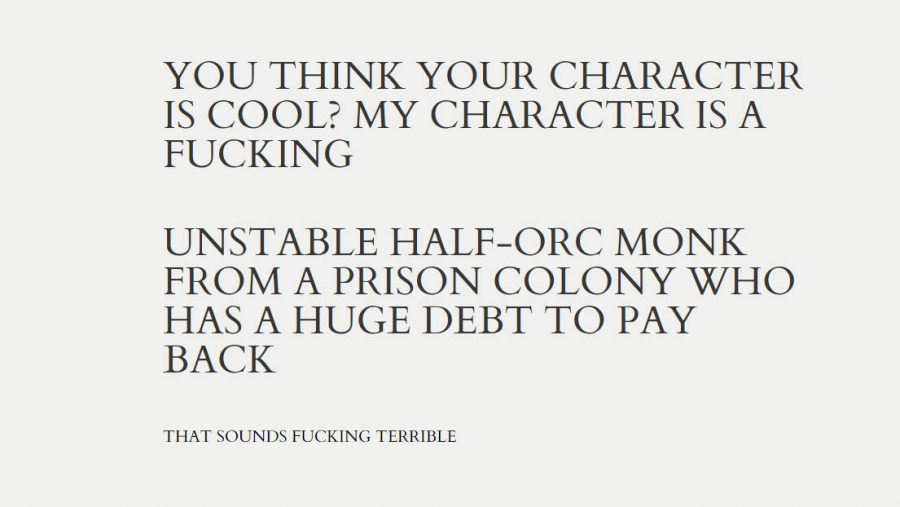 Who the fuck is my DnD Character

A sillier option, but surprisingly useful in moments, Who the fuck is my DnD Character isn’t a usual character creator. It doesn’t build a character sheet for you, and it won’t teach you how to fill one. Rather, it provides random, pithy, and often tongue-in-cheek character descriptions, to serve as a basis for your build. Perfect if hours of adventuring has sucked all the roleplaying imagination from your brain.

Some of the backgrounds its serve up include:

Will it help you to quickly create a character and get adventuring? Probably not. But even a character with the most rigorously balanced stats will be no fun to play if there’s not an engaging roleplaying base backing them up.