D&D character sheets are, in a word, fundamental to playing Dungeons and Dragons. You might spend hours deciding which of the DnD races you like the look of, poring over all 14 DnD classes, and creating the perfect build, but if you don’t have a piece of paper to scribble down your stats, or a digital version through which to input the numbers, even the most min-maxed character won’t do you much good.

We’ve compiled this handy list of D&D character sheets, so you know where to begin on your next adventure. To make things a little easier, we’ve categorised them into several groups: standard, if you’re after the typical sheet; class-specific, if you want to more easily arrange your character’s traits; accessible, designed to help players with dyslexia or visual impairments; advanced, to provide room for more customisation; and new player sheets, for first-time adventures who need a little guidance.

Of course, they all fit the bill, and can be used by anyone. But if you’ve only ever used the standard D&D character sheet before, why not test out another version, and see how it fares?

Even better, they’re (mostly) free, so don’t worry if the gold in your pocket is looking a little on the thin side. 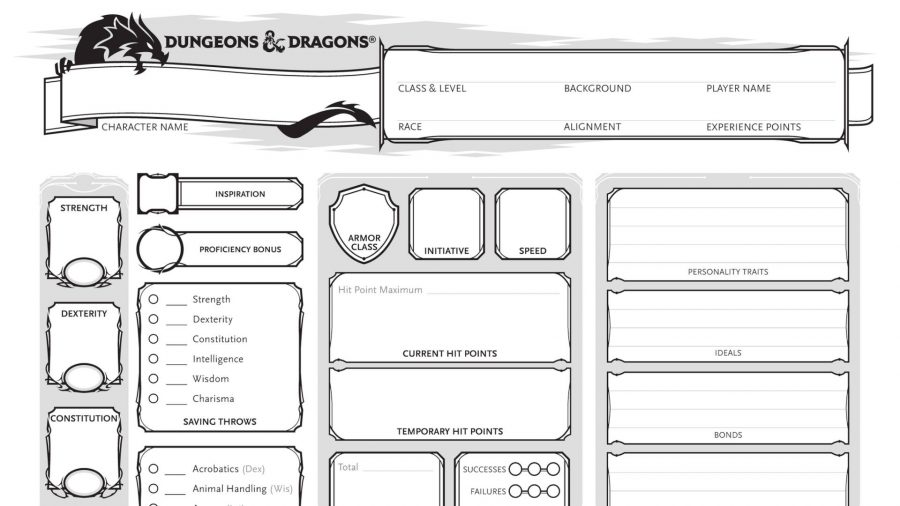 If you’re only after the standard D&D 5E character sheet, look no further than the resources page on the official Wizards of the Coast website. The 5E character sheet bundle contains the basic version, as well as a slightly adapted form in a different format. Both can be printed and used straight out of the gate. If you’re playing D&D 5E solely online, however, or would prefer not to print, check out the ‘fillable’ PDF version, which lets you type in its contents without spilling any ink.

Basic but sufficient, the standard character sheet is likely to meet most people’s needs. It has space for all player stats, as well as two optional pages to record your character’s appearance, events of your adventure, and the list of spells you may learn as you level up.

Source material: These are the best D&D books

If you’re still not impressed, consider D&D Beyond. Not only is it free to use, and inclusive of all 5E material that can be freely accessed under the game’s Open Games License, but its character sheet is interactive. Every stat can be clicked to bring up an explanatory info panel, and ability rolls or skill checks can be made at the click of a button. It even shares dice scores in a shared campaign log, so you check no one’s cheating.

And if you do decide to take your roleplaying out of the digital world, D&D Beyond’s character sheets can be exported into fillable PDFs. 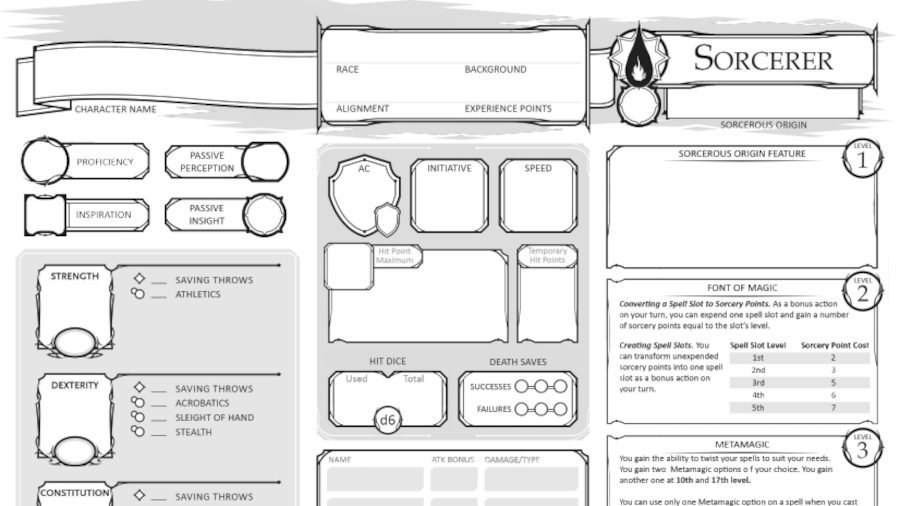 For a more ergonomic option, check out these class-specific character sheets. They revamp the basic sheet to include additional boxes and panels, specific to each class. There’s space to record your optional class features as you level up, your pick of subclass, as well as your mandatory abilities, such as Barbarians’ rage. There’s no chaff with these – everything you need to play your chosen class is ready and waiting on the piece of paper in front of you. 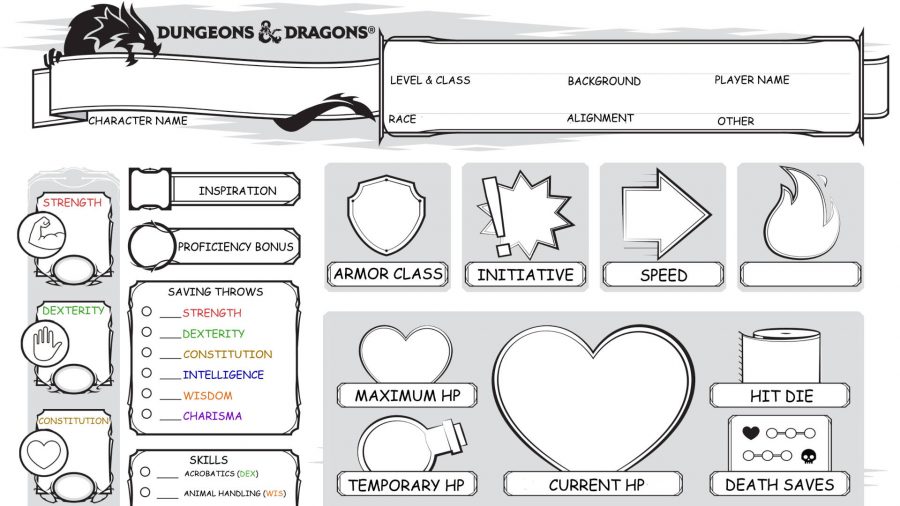 D&D is at its best when it welcomes everyone to the tabletop, and these accessible sheets do well to encourage that. First up, check out these dyslexic friendly D&D character sheets, designed by Twitter user Axelle. Intended to be easier to read for those with dyslexia, they’re written in large comic sans, are colour-coded, and feature added shapes and icons. They’re also available in German and Italian.

If you’d rather read a character sheet written in the OpenDyslexic typeface (specifically designed to aid the reading of those with dyslexia), consider these character sheets shared on Reddit.

Arcane abilities: Our pick of the best D&D 5E spells

Bear in mind that they’re not exact reproductions of the standard sheet, with some boxes changed or missing, but they contain more than the bare essentials.

Those with a visual impairment might be interested in this character sheet on the Dungeon Masters Guild. Free to download, it’s a redesigned character sheet written in Arial Bold, in a large font, with large spacing, and colour coding. Again, it’s missing some information, but contains all the main elements. 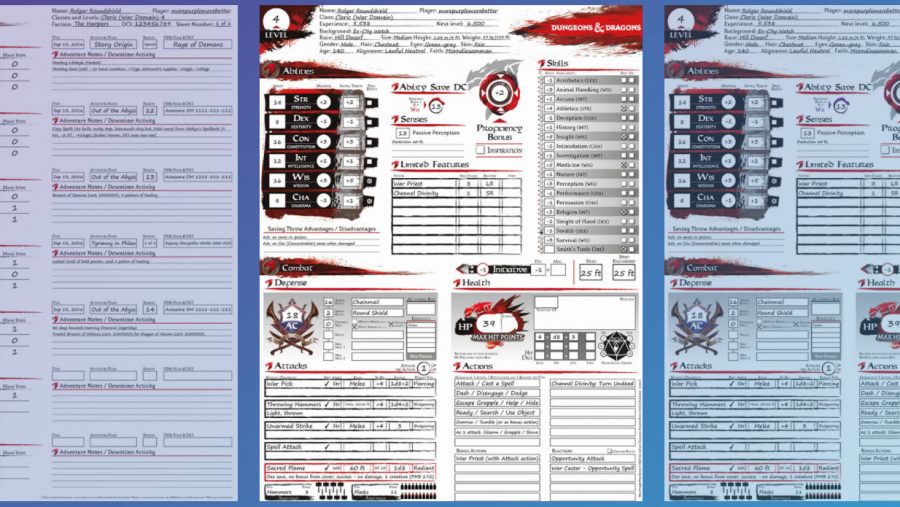 If you’re a seasoned player who’s bored of combing through sourcebooks, and after a little more customisation, you could do little better than MorePurpleMoreBetters’ 5E Character Record Sheet (or MPMB, for short). Halfway between a full character builder and a typical recording sheet, MPMB is fully fillable, automated, and has all the optional pages you could want. Fill a page with all the feats you’ve acquired, and companions found, or stick some handy rule references down.

There’s a lot of customisation here, including the ability to import your own scripts (or those you pluck from an internet forum) to add more content and functionality. Its automation is the main draw, however. Being able to select a companion, have them automatically added to your sheet with all relevant stats, or generate a complete list of your known spells in an instant is a huge time saver.

This isn’t free, however, and requires a subscription to MPMB’s Patreon page to use. 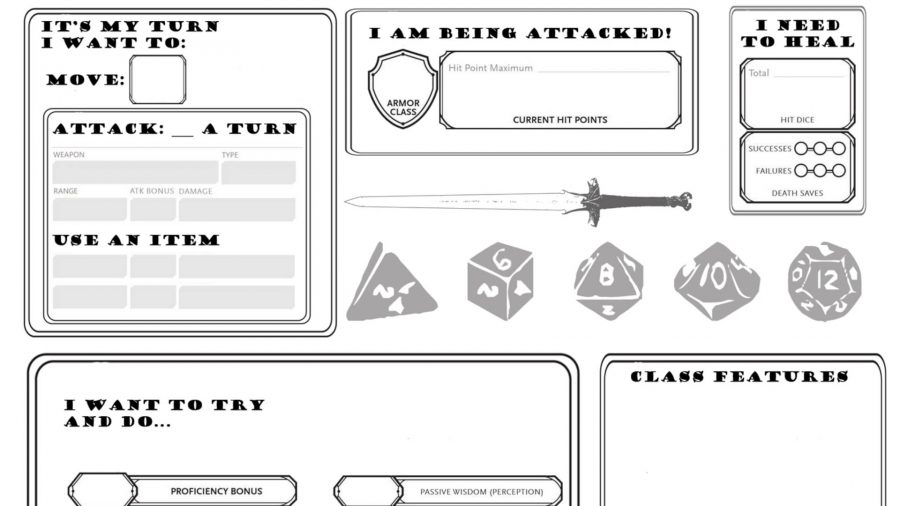 Character sheets can be overwhelming for fresh-faced adventurers. A hodgepodge of boxes, stats, and roleplaying reminders, it’s easy to become confused by the amount of information sitting before you. Fortunately, there’s a host of character sheets designed for new players, better arranging the information into mechanical groups, and explaining their use.

Character template: Our guide to the best D&D character builds

This free character sheet on the Dungeon Masters Guild is a no-frills document that outlines basic combat rolls and spellcasting for those totally new to the game. This sheet, meanwhile, provides a handing list of the possible player actions you can take in a combat encounter, for those who might forget they can do more than wave their sword about. Finally, this sheet presents itself in terms of what a player can do on their turn, and the corresponding rolls they’d have to make. Super simple.