Dune is big. Anyone who’s flicked through Frank Herbert’s beloved sci-fi novel, cast their net over the various lore explainers of the internet, or plunged into David Lynch’s surreal, red-haired-Sting-filled 1984 film adaptation can attest to its sheer fictional scale.

A sweeping blend of intergalactic feudal politicking, quasi-spiritual machinations, and ecological commentary, its 10,000 years’ worth of lore is fittingly abstruse for a ‘60s sci-fi classic. Density, above all else, might be the hallmark of the franchise – something the creators of Dune: Adventures in the Imperium, a recently-released licensed tabletop RPG from publisher Modiphius, know all too well. Translating its many, convoluted facets to the tabletop was no simple task.

“If we gave people everything, the fans would think it’s great, but anyone who’s new to Dune would think ‘where the hell do I start?’,” Andrew Peregrine, project manager and writer, tells Wargamer. “It’s huge. Our existence on this planet would be a dot in the Dune timeline. Dune is further ahead from our time than the pyramids are behind us.”

Faced with this mammoth universe, Peregrine and the rest of the design team settled on distillation, rather than complete recreation. The game’s core rulebook contains a thick 70-page stack of lore, but even that’s only enough to detail Dune’s central happenings and key players. 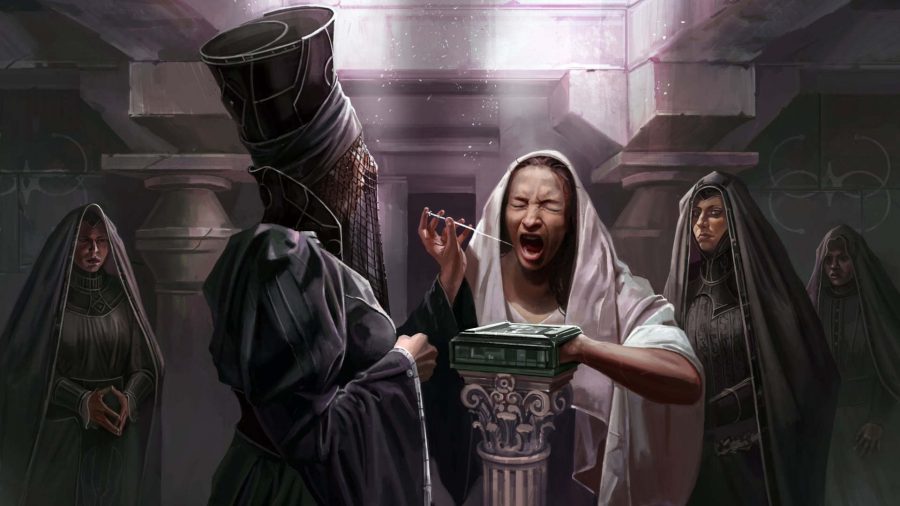 The familiar faces of the Bene Gesserit, Spacing Guild, and Landsraad all make appearances, but really, it’s that most recognisable feature of the franchise that acts as a cushion for new players: the desert planet of Arrakis, just as it appears in the original novel.

It’s huge. Our existence on this planet would be a dot in the Dune timeline

“That’s very much an era of the setting that’s quite stable, but it has a lot of potential for things to happen,” lead designer Nathan Dowdell says about the choice of setting. “Whereas in the aftermath of the original novel, everything starts getting a little bit messier and a little bit crazier. It felt right to start from a place of relative stability and be able to go ‘this is how things are’, and then to build up to the crazier stuff later.”

Peregrine similarly highlights that Arrakis is not only a natural point of departure for many fans of the series, but can serve a greater thematic purpose when presented in isolation. Focusing the game on a single location lets the features of the Dune universe breathe, and bleed into the players’ adventure. Wholesale submersion into its mythos would not only be overwhelming, but fail to fairly characterise its unique features. 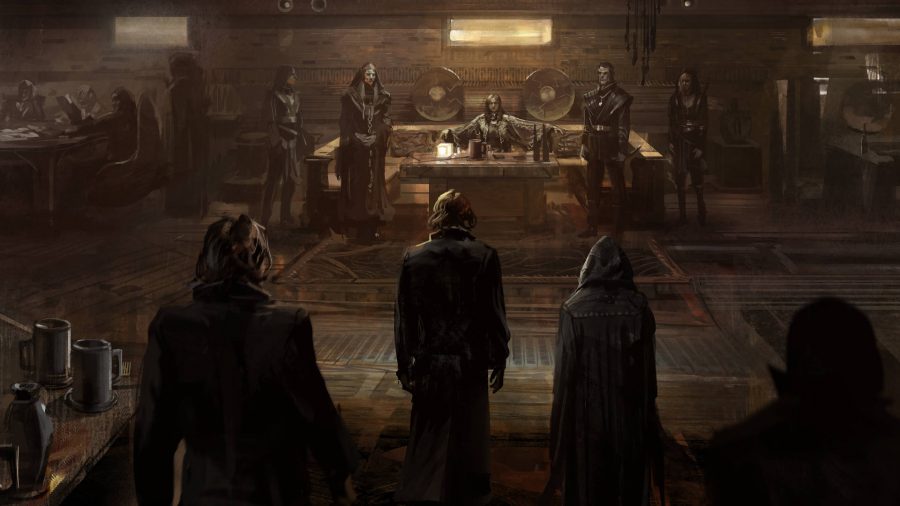 “I’m not a big Tolkien fan, I haven’t even read the books,” Peregrine says. “ I’ve played versions of Middle Earth and thought it’s kind of D&D; I don’t get why people are so into it. But I loved what Cubicle 7 did with The One Ring. Instead of doing all of Middle Earth, they did just one little area, and really brought out the Tolkien feeling. After years and years of gaming, I suddenly thought, ‘now I get why people are into Tolkien, I’m seeing all of those little details. And I want to inspire that with Dune.’”

That’s not to say the wider Dune universe is left in the dust. Before even building their personal characters, players collectively create a noble House for their party to serve, deciding its scale, influence, traits, and the various rivalries or alliances it might possess. It’s the central axis around which the party revolves, and a means of encouraging players to digest Dune’s lore while adding their own mark on the universe.

Tabletop treats: Our pick of the best tabletop RPGs

“A lot of work has gone into building the empty space beyond the iconic stuff of the first book,” Dowdell says. “You can develop a group that’s based around a completely new House of your own devising, on a planet that might be hundreds of thousands of lightyears away from Arrakis with its own concerns, its own rivalries, its own politics, and its own struggles. You can play your story mostly removed from the Atreides, Harkonnen, and the conflict on Arrakis.”

That House system came early, and quickly figured as a central feature of gameplay. Placing players at the service of a House, or in its leadership, not only allowed adventures to capture the scale and stakes of Dune, but also presented a goldmine for drama, and enticing roleplay. 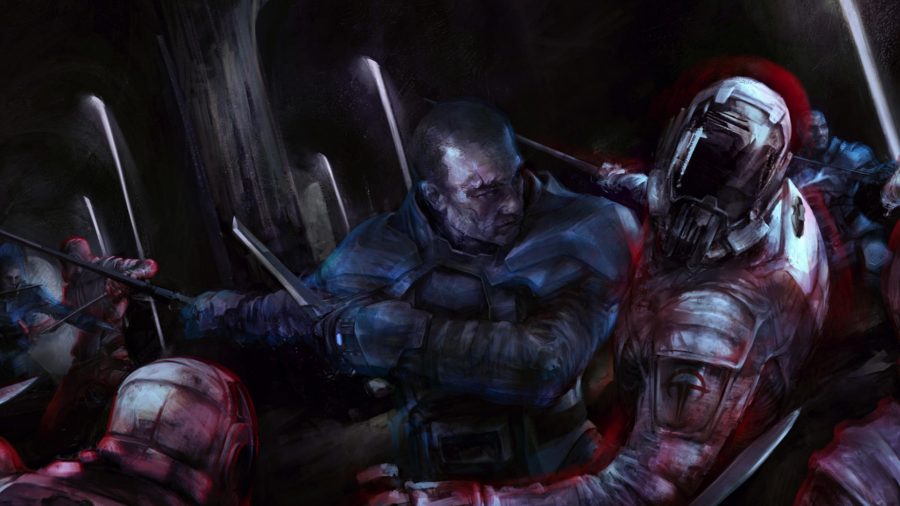 “There are plenty of RPGs out there where you create your characters individually and there’s no sense of connection between them, barring whatever the players come up with themselves,” Dowdell says. “That isn’t always the best fit for a game. Sometimes you want to have some common identity for a group that exists beyond the individual player characters themselves.

“In the context of Dune, the house was ideal for that. In much the same way that, for example, in Blades in the Dark your gang has an identity that’s separate from the individual characters. There’s something that brings the characters together and makes them interact beyond just inertia and the expectations of the individual.” 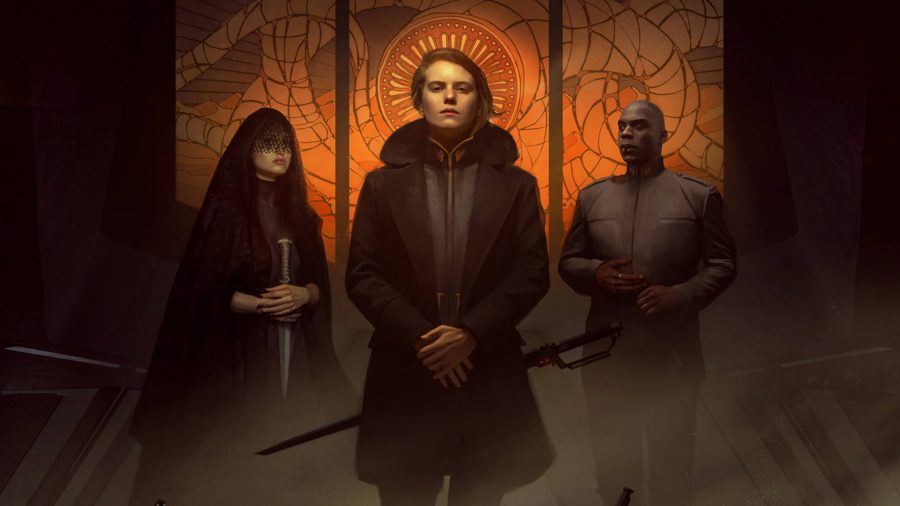 The team met a more immediate obstacle, however: what would players actually do? Although spanning intergalactic armies and macroeconomic trade disputes, Dune is also replete with backroom schemes and petty rivalries that penetrate the corridors of power. Intertwining the galactic and personal, it moves between them at pace.

The central player characters are, if not the rulers of the house, certainly the movers and shakers

Dowdell says it was important for the game to capture this breadth of scale, while finding a balance. Player characters need to be involved in the action, but must also be the decision-makers of their House if they’re to have a stake in the political sphere. Keep them in the action only, and an NPC far above them would be railroading them through the adventure; but restrict them to the war room back home, and they’d never get to do anything interesting themselves.

It’s a dilemma that Dowdell had worked around previously on one of Modiphius’s previous licensed, sci-fi releases: Star Trek Adventures. 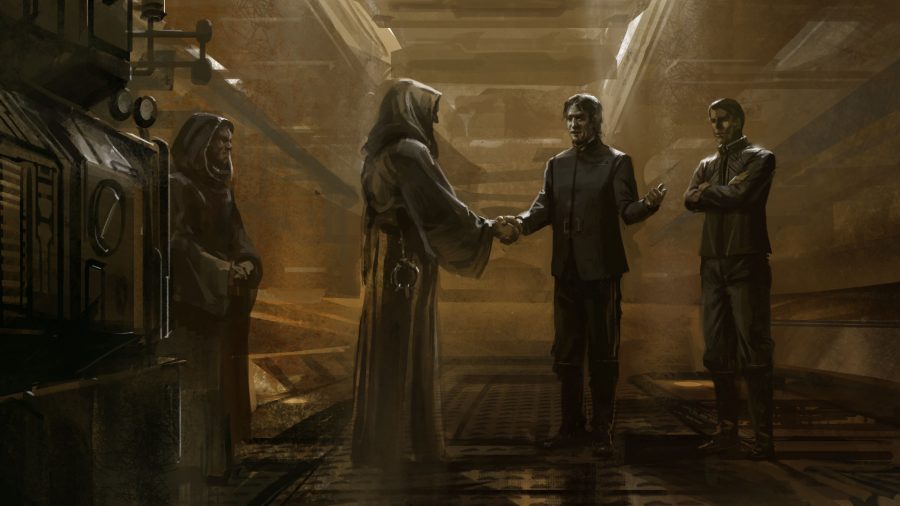 “I took a similar approach with Dune, where your central player characters are, if not the rulers of the house, certainly the senior advisors; the movers and shakers. People who get to make important decisions, but still get to be a bit more proactive in their own right.”

Gaming greats: These are the best board games

Dowdell describes the structure of the final game as a “directed toolbox” that allows players to create the scale of adventure they favour. You can tackle an adventure through various means, with each avenue not only offering differences of scope, but gameplay.

“Say you’ve got a rival house who you believe has stolen proprietary secrets from one of your enterprises. That’s clearly work for the house’s spymaster, probably a Mentat with specialised training, and could be a couple of skill tests. 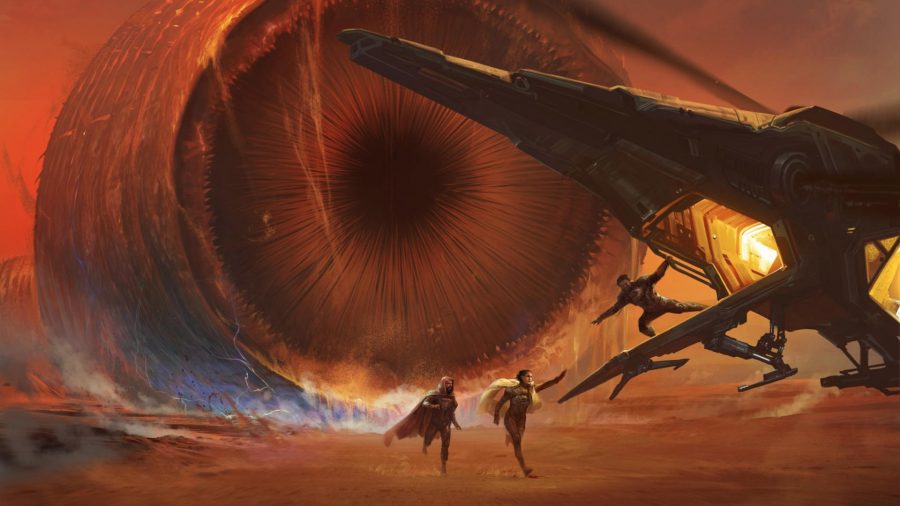 “Or you could play it out in a little bit more detail with a Challenge, and have a track that you contribute towards over several skill tests. Or you can resolve it as a full-on conflict, manoeuvring assets like agents and surveillance devices through their guards, walls, and sniffer probes. Or if you wanted to, you set up a couple of supporting characters and play it out from their perspective.”

However, shifting the players’ focus to high-level, political actions isn’t without its costs. When player decisions are made in the cold, isolated halls of power to advance the status of a noble house they can neither see nor feel, gameplay can feel somewhat impersonal. It threatens to erase the characterful moments that punctuate roleplaying.

Dowdell’s approach to this was to double down on the importance of player characters’ personality traits. Every skill test you make is influenced by the beliefs your character holds dear, and the ‘Drives’ that push them forward. The relative importance they place on duty, faith, justice, power, and truth, will determine a roll’s difficulty, ensuring that, even in the most isolated of circumstances, your actions as a player are intimately tied to the beliefs of your character. 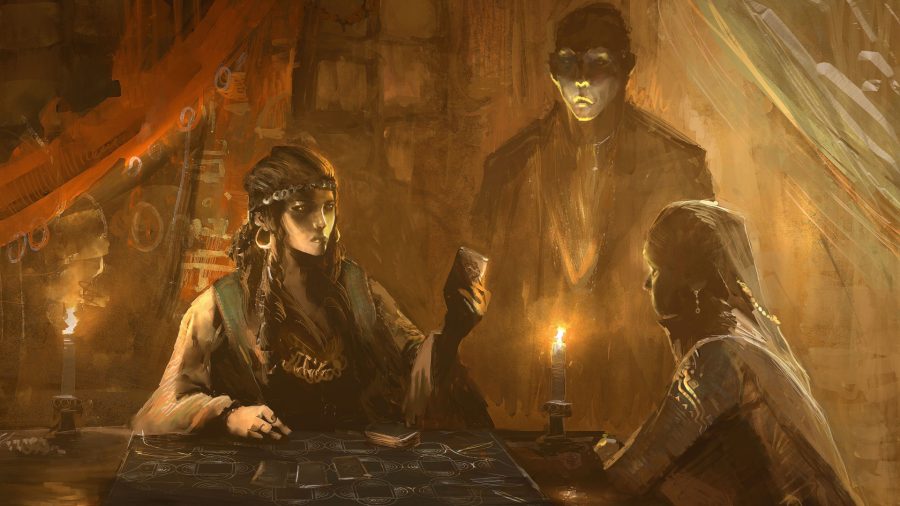 “It’s often particular ambitions, goals, and views on how the world works that drive people in different directions. So that your character’s beliefs are central to the actions they undertake I feel helps add a lot of weight to the actions taken by the top-end, architect-level characters. Every skill test that you’re making is almost a statement about what the character believes.”

Two-player picks: Check out the best couples’ board games

“In some game design circles that I frequent, there’s this idea of author stance play versus actor stance play, where the way a player relates to their character is either as an actor playing a role, or of an author writing a story.” 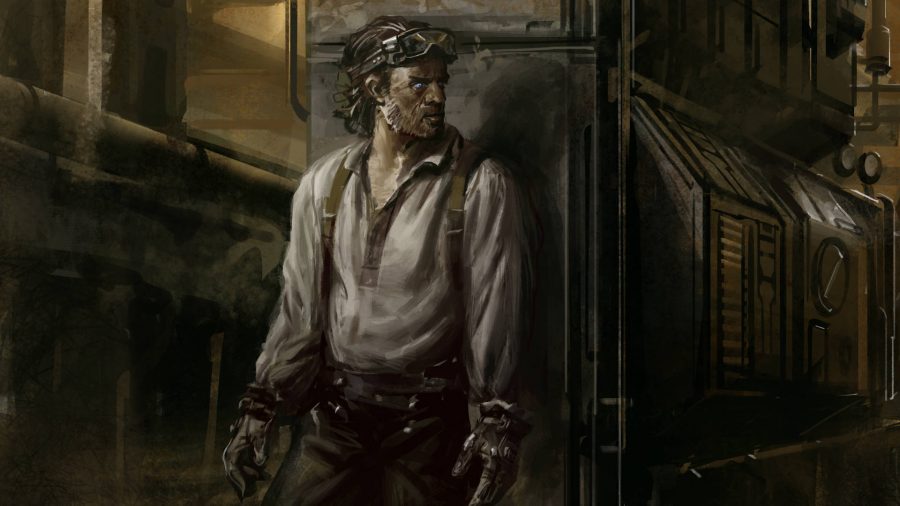 “Things like the Drives almost provide a sense of character agency. The character has agency over the actions that they take, which are separate from that of the players. Obviously the player has decided what Drives to focus on, but in the individual moment, what you want to do might not necessarily be what your character wants to do. And vice versa.”

“When you’ve got two Drives that are at odds with one another; when you hold two beliefs that are contradictory to one another, and both of those come up at once – which do you follow?. That becomes a really interesting opportunity for drama and interesting things to happen at the table. At the end of the day, whatever setting you’re using and whatever game you’re playing, interesting things happening at the table is the goal.” 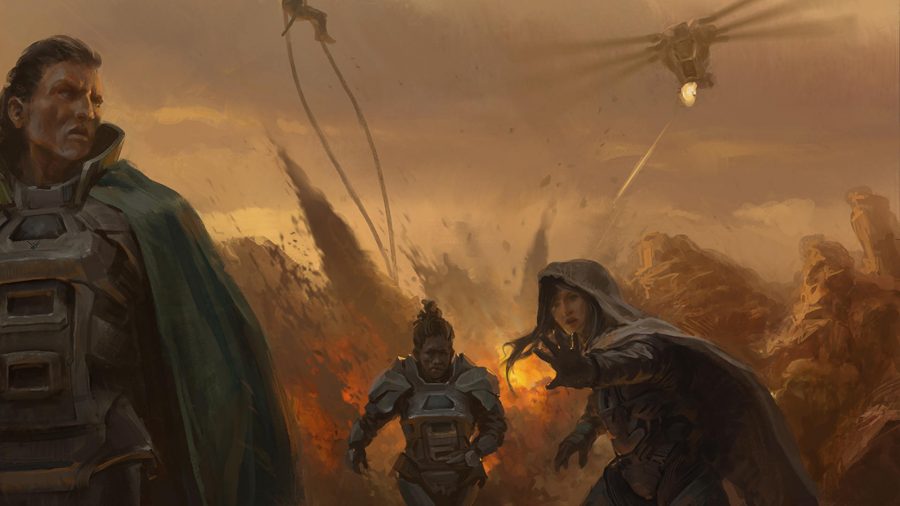 Throughout the design process, the team was adamant about capturing the iconic features of Dune in a complete product, while allowing room for players to roleplay the universe as they saw it. Peregrine emphasises the importance of creating a rulebook that is at once precisely structured and open for player expansion.

“All we had space for really was to try and cover enough about each of the various aspects [of the Dune universe] so that someone who’s new to Dune could get a handle on them. And give enough of a foundation for people to then extrapolate themselves, or move on to other stuff.

“If I hand this book to someone, I don’t know what’s going to be their favourite. Are they going to say they just want to play Bene Gesserit agents, or they just want to play Fremen, or they really want to get into house management? I don’t know what anyone’s going to do, and that’s the beauty of roleplaying: you hand over this book, and people will take it in all manner of awesome directions”.