The lizard newts are in position at the beachhead. Clubbers hug the shoreline, submerged in deep water to hide from the imperial spearmen a few hexes inland. On the other side of the spit, two units of hunters and shellers sidle up to the coast undetected, ready for the fray. A final pack of newts clamber onto the sand, sacrificing their concealment to alert the Imperial forces, and entice them over in the hope of easy pickings.

The newts don’t stand a chance. All squishy flesh, webbed feet, and primitive clubs, they’ll be nothing more than scaly sacks of sharp teeth in a couple of turns. But they’ve served their purpose already. As the spearmen approach in the expectation of a quick fight, they alert the units hidden in the surrounding water. First they suffer melee hits from the clubbers and hunters, then the shellers lay missiles into their flanks, finishing them off in one fell swoop.

It’s quick, it’s tactical, and it’s the type of play that typifies the Lizardfolk – the new faction introduced in Fantasy General 2’s latest expansion, Evolution. Adding a new campaign, terrain types, items, and heroes, the DLC is wholly centred on the new amphibious faction, which brings with it a new roster of units, upgrade trees, a resource type, and, most noticeably, a playstyle that distinguishes it from the Barbarian and Empire factions of the base game. They’re refreshing, colourful, and fun, and, if it wasn’t for the underlying tension of their playstyle, they’d easily be the most enjoyable faction in the whole game.

In many ways, the Lizardfolk operate as human units in reverse, with water acting as home turf. Aquatic attack and defence bonuses are granted to all lizard units, rivers function like roads to allow quick traversal of landmasses, and the penalties usually accrued from fighting in swamps are struck off. 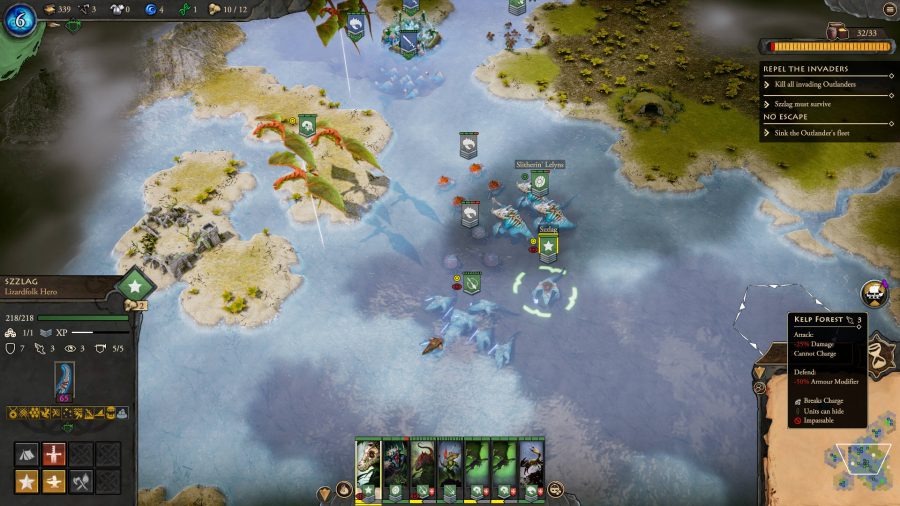 But their most engaging distinction is their stealth capabilities. The deep blue of the ocean provides a trusty blanket under which to hide from enemies, allowing you to brazenly dart across the map, locate lone enemy units, form an encircling perimeter, and lure your helpless foes into the trap. At other times, engaging in hightailed hit-and-run fighting – swooping in for an attack, before darting away, recouping your health, and launching another surprise assault – is the order of the day.

Ambushes arise naturally, with plenty of opportunities to leverage your lizards’ concealment and ambush capabilities. Rather than forcing myself to stage elaborate clandestine exercises, they arose naturally across the campaign’s missions. Numerous openings for a quick stratagem regularly appeared, which were quick to set up, even quicker to execute, and rarely felt so linearly staged or dictated as to insult my tactical ego.

And a good thing, too. Lizard units are weak and feeble, easily struck down by even the most unremarkable of enemy troops, and capable of dealing little damage by themselves until upgraded. You’re forced to take a slow, considered approach to skirmishing, planning advanced assaults, and making a quick getaway should you be overwhelmed by the unexpected size of the enemy. Push too far, too soon, and your reptilians will be rewarded only with their destruction. 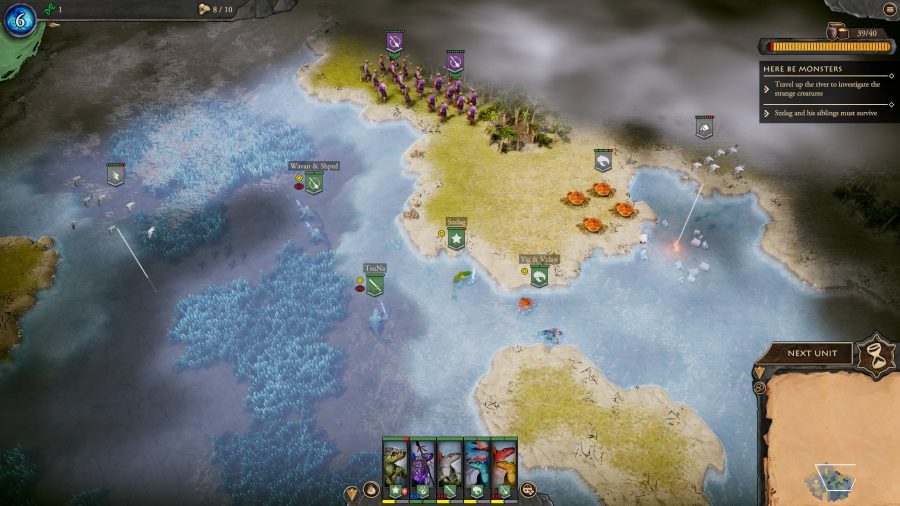 It’s a shame, then, that this naturally rewarding playstyle sits in such abrasive tension with the lizards’ other primary faction feature:swarming. The lizardfolk are a horde army at heart, with their basic units – newts – being cheap and cheerful. Throughout the campaign, you’ll be swimming in gold to acquire new recruits on the fly, fielding a maximum army size with ease, and replenishing your stock of forces mid-mission with new newt skirmishers and clubbers.

Unlike those units of the Barbarians or Empire that must be safeguarded at all costs, the Lizardfolk revel in their easily-killed, easily-replaced warriors. You won’t miss them when they’re gone, because two new ones will soon spring up, hydra-like, in their place.

You’re encouraged to act brazenly with their lives. For each lizard unit killed, you’ll be rewarded with one ounce of liquid mana (an otherwise scarce resource, used to advance units through their upgrade trees). Not only walls of flesh to throw at the enemy in the hope of crushing them by sheer weight of webbed appendages, but a deep well of cheap, disposable units ready to be repeatedly farmed for their resources.

Use low-level troops as cannon fodder to throw against lines of enemy units without a care for their direction or survival, and you’ll quickly be able to upgrade the survivors into a formidable battalion of elite lizards. 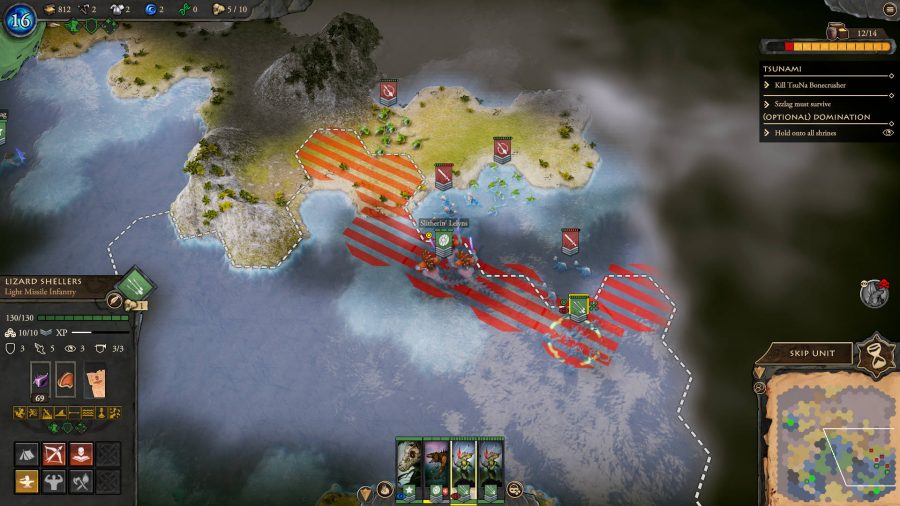 In some cases, this plays out in wonderful, dynamic battles. Faced with waves upon waves of deadly crabs during one of the games’ many boss battles, and realising my main force was quickly dwindling, I was able to recruit half a dozen newts, move them swiftly through the water to the frontlines, and have them join the fray. Dealing a few respectable hits here and there, they quickly died – but provided that precious liquid mana, from which I could upgrade my surviving combatants into a more effective fighting force. Feeble newts became snarling hunters, weak clubbers became vicious warriors, and one of my more advanced units could upgrade into a terrifying swamp dragon.

The balance of play can shift in an instant

It was momentous, battle-shifting, and completely organic. Being able to swiftly upend your forces and overhaul fielded units to overcome the unanticipated obstacles of battle makes for some truly dynamic skirmishes. The balance of play can shift in an instant, making for some glorious heroic assaults, and some equally painful defeats when your backup doesn’t arrive quite in time.

But it doesn’t make for an easy stealth-focused playstyle. Swarming and farming weak newts is antithetical to the considered tactical planning that the campaign initially encourages you to consider. Why bother to carefully plot a surprise ambush against superior units, as the lizardfolk’s perks are designed for, when you could equally, and more quickly, simply send legions of newts to their wilful deaths, harvest their remains for liquid mana, and bolster your forces to the comparative fighting level of your opponent? 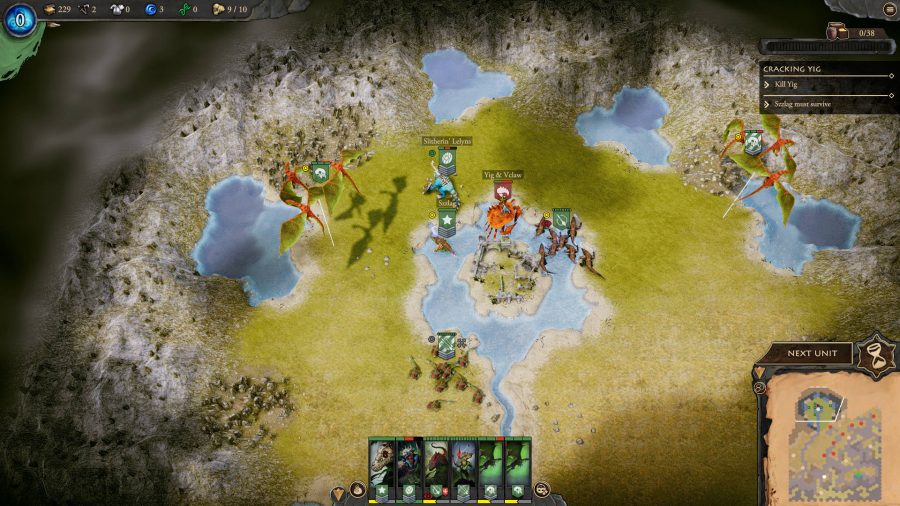 The tension between the two playstyles becomes quickly visible, and the nuanced ambushes that I was previously setting up soon faded from play. As you field an upgraded force, the sneaky stealth tactics that hallmarked the lizardfolk in their early missions vanish. It becomes unnecessary to plan an advanced attack, and many mid-tier and late-game units don’t possess the ability to remain undetected from enemies or perform surprise ambushes, making any semblance of a stealth operation impossible.

Middle-aged: These are the best medieval games

By the campaign’s end, I found myself unable to return to the lizardfolk’s early style of tactical luring and considered battle plans. I needed to field heavier units to match my enemies’ high damage output, sacrificing the early stealth playstyle entirely. The Lizardfolk lost much of their appealing distinctions, morphing into a faction that sits disappointingly close to the existing Barbarians and Empire of the base game. 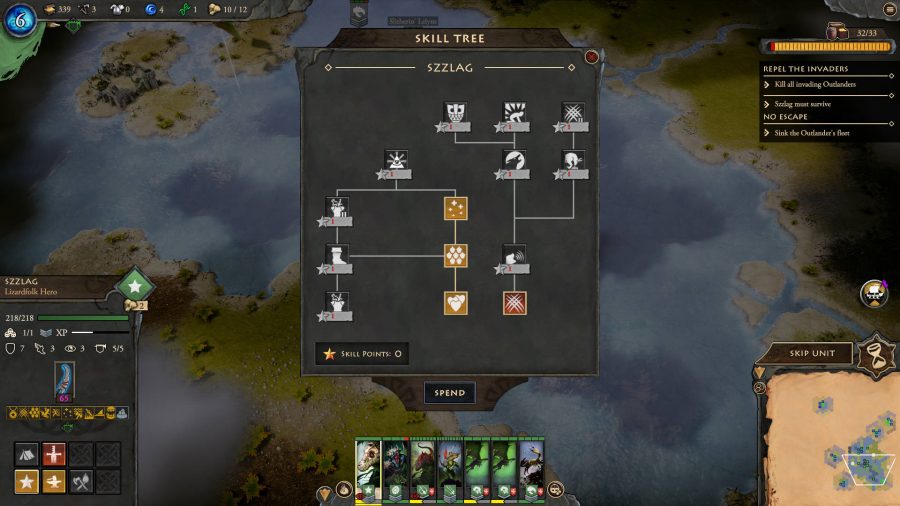 A variety of playstyles is no bad thing, and handing the player a choice of attack options is refreshing within a genre that so often encourages direct frontline assaults above all else. But Evolution’s inability to balance its cunningly tactical and assault-focused halves left me wanting. The pace at which the Lizardfolk’s specialist stealth mechanics disappeared from play left me craving more, keen to ditch the large skirmishes in favour of the covert operations of early missions.

Worse, as you’re forced to dispense with the ambushes and hidden assaults, so too does the limited variety of the Lizardfolk become apparent. With many fewer unit types than the other playable factions, and fewer heroes too, you’ll quickly run into the walls of their capabilities. The upgrade path for missile units abruptly ends after two stages, and the skirmisher line transforms into a witch doctor or dragon at its end. All are combat and undoubtedly look cracking on the field, but some feel underfilled.

Elsewhere, the campaign is enjoyable but unremarkable. The story provides sufficient context for battles and gives a narrative flavour to strategic objectives, but extends to little else. No one will come away with a genuine interest in the plot, character, or the world that is described around you. Things happen, you react and skirmish accordingly, it all works smoothly if mediocrely. 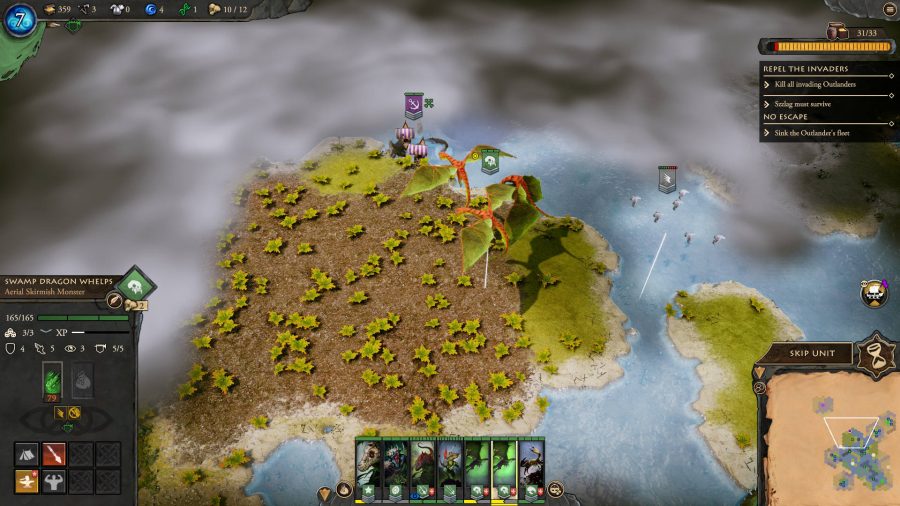 But creative writing and innovative world-building were never Fantasy General 2’s strengths, with the base game’s factions thinly-veiled analogues of the Roman-Gallic dynamic. Not done in pastiche, nor in nuanced mythical-historical translation, it landed somewhere closer to laborious cliché of an already done-to-death historical period.

In comparison, Evolution is a step in the right direction. Sillier, fanciful, and ready to lean into its fantasy potential, the archipelago of the Lizardfolk is more enjoyable to discover, even if the plot discoveries made are underwhelming.

Supreme commander: Check out the best strategy board games

In some ways, Evolution is trying to emulate the amphibious Lizardfolk themselves: it wants to be equally comfortable in the watery depths of covert ambushes, and in swarming overland battles. But in trying to nail both styles, it creates a mishmash that, while enjoyable, diminishes the novelty of its star faction

A metaphorical stretch? Possibly. But Evolution would certainly play better if the Lizardfolk fully embraced one of their playstyles, rather than an uncomplimentary, squabbling partnership between stealth and full frontal assault.