Happy Hack and Slash Day! Never heard of this holiday? Well, it’s February 4, 2021 and celebrates the release of Matrix-Slitherine Games’ latest edition to the Field of Glory II franchise – Field of Glory II Medieval (or FOG2M).

For those unaware, this product line is a direct port to the computer of the highly successful ancients (plus) miniature wargame rules of the same name, by Richard Bodley Scott. Indeed, Scott is also the developer behind Byzantine Games, so if you think the electrons are going to be pretty faithful to the pewter tabletop battles, then you would be right. Let’s take a look.

Unlike its tabletop counterpart Oath of Fealty, FOG2M is not an add-on DLC pack. It’s a new standalone game covering medieval warfare in northern Europe in 1040-1270 AD. However, like its tabletop cousin, it works identically to the base game, and the PC experience pretty much mimics what happens on a miniatures table. The difference is that the computer AI reduces to beginner-accessibility what is really one of the most sophisticated miniature wargames ever. While pewter-pushers deal with pages of diagrams depicting exactly how all the stands of your miniature army move and manoeuvre, in FOG2M, the computer works all that out transparently. Instead of calculating multitudes of Points of Advantage to determine combat DRMs, the software performs the job.

And, while we have covered the details in previous articles, generally, all a player need do is click on a square containing a single unit – or a single command consisting of several squares. When that happens, the computer will highlight all the squares within movement range.

Pick a destination, the unit will move to it, then the computer pops up tactical options to consider at the end. These include shooting bows, melee combat, wheel movements, and so on. 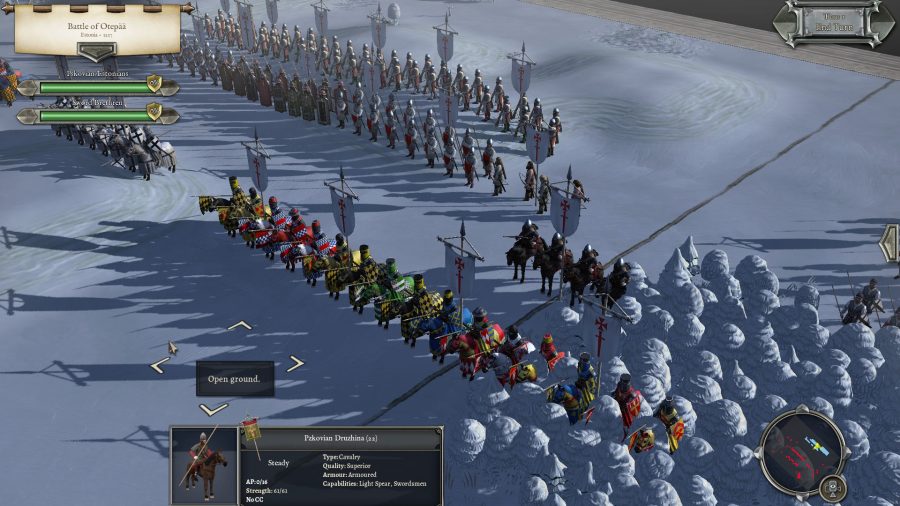 So why a new game as opposed to a DLC? Well, Scott is meticulous research personified, and new information surfaced. He discovered that using the same ancients combat charts, manoeuvre tables and unit point system didn’t capture the historical reality of medieval combat, especially armored knights. No, these lads were not, after all, Byzantine Katafraktoi clad in some updated threads, but something altogether different. So, knights now cost more, while other troop types have seen their point values decrease.

There is a modified engine under the hood and, after 40 hours, I can safely say they nailed it

Further, there is a modified game engine under the hood reflecting this, and, after a good 40 hours-plus of gameplay, I can safely say they nailed it. There are other changes and modifications as well. The UI has a more period-specific look, with army rout percentages now represented in two green sliding bars, with red info icons. There is also a convenient button on-screen for top-down view, and a new pull-out menu on the right of the screen with icons for line of sight, next unmoved unit, command radius and so on. 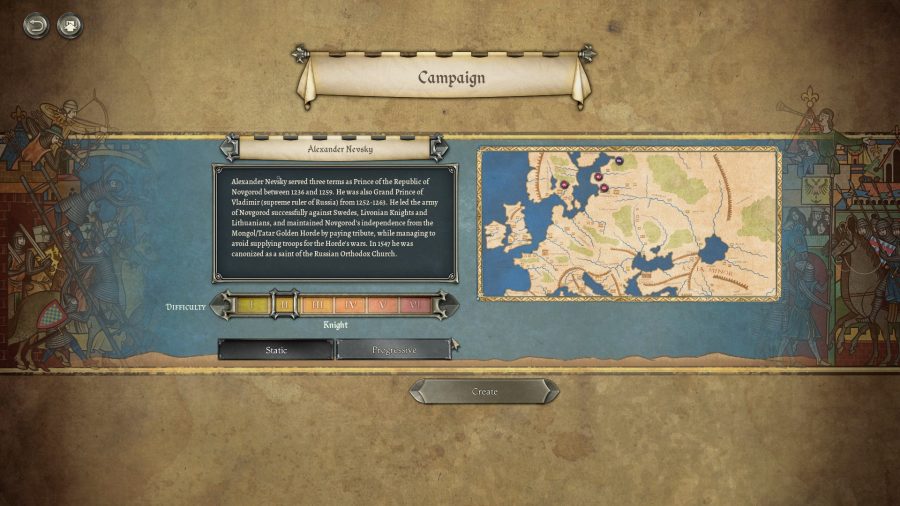 This really resonates as, back in the Dark Ages (see what I did there), at university, I remember a history professor teaching the two most common types of medieval combat were raids and sieges. Yes, meticulous research.

Pot helms and lances: These are the best medieval games

Then, finally, there are the visuals, which have undergone a complete overhaul. Instead of the mosaic-themed intro screen of the past, we now have a stylized version of the Bayeux Tapestry, with two armies bashing kneecaps and cleaving heads. It’s drop-dead gorgeous, to the point I have it as my PC desktop and cellphone wallpaper. Likewise, the game’s entire terrain tile suite (yes, dwarf trees and hobbit hovels are still with us) has moved from the Middle-east and Mediterranean/southern Europe to a more northern European look.

This also includes a completely new terrain type called “Frozen” (Elsa was a Boyer, who knew?) so players can tackle Lake Piepus, or any of the other stand-out battles fought in the snow. 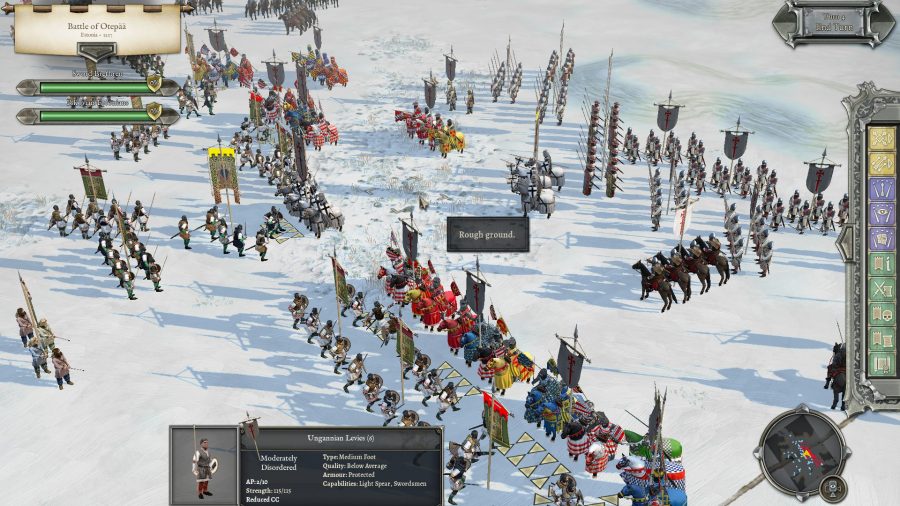 Typically, combat units are St Petersburg Miniatures levels of stunning, displayed in exactly the same numbers and positioning as their equivalent tabletop bases. And the history is there, with clothing variations, historical standards (which can be replaced if too similar to the enemy’s) and spiffy animations.

Mounted knights charge with lance, for example, but in round two, they sling them and draw swords. And they all parade in various hues of red, yellow, blue and green within the same unit – none of this “let’s put the entire French army in different shades of blue” Hollywood history that you find in Total War. Given that you have 29 nations across 57 army lists with 100 3D troop types, 12 historical battles and more, that’s a lot of toy soldiers you’ll never have to paint. 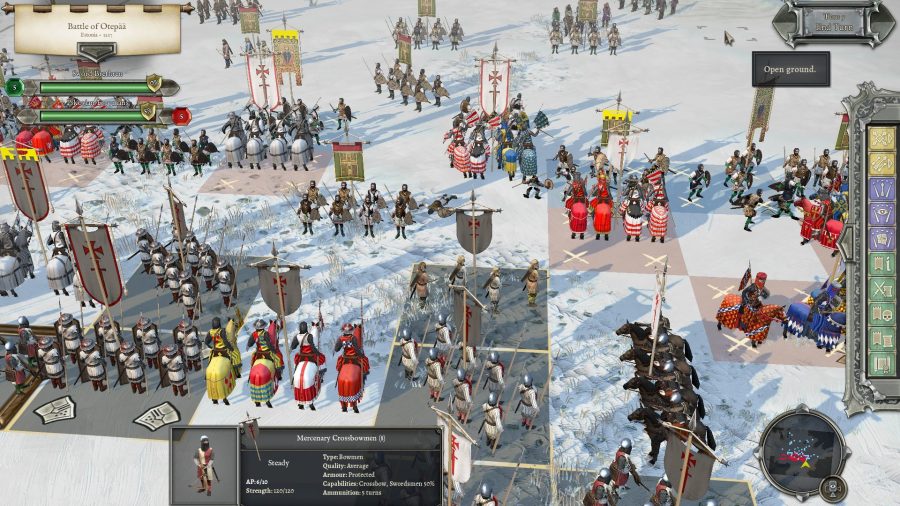 Smiting thy Foe Most Fowl

While gameplay in FOG2M is pretty much the same as the rest of the series, playing the game is most decidedly not. Unless you are leading Mongols, this game has nothing to do with manoeuvre, and everything to do with straight-ahead brute force.

Crosssbows are effective, but face to face hacking is most prevalent

Crossbows, due to the weapon’s ability to penetrate just about any armor, are also highly effective, but otherwise, hacking limbs off your enemy face-to-face is the order of the day. I found this out in hours’ worth of play as part of the game’s Beta test pool, and, when the final reviewer’s code came out, I decided to revisit this perspective by playing a couple of games on the only historical engagement I had not done. This was the 1217 battle of Otepaa.

Here, a castle full of Christian Germans was besieged by some 20,000 Rus and Estonians, but Bishop Albert of Riga sent a relief force of 3000 men to disperse the mob. These were the knights of the Lithuanian Brothers of the Sword, who, stout of heart (if thick of head), did their best, only to find themselves locked up in the castle they were to save, surrendering soon after. Plus it was fought in the snow in a battle to raise a siege, so it seemed to me a perfect FOG2M scenario. 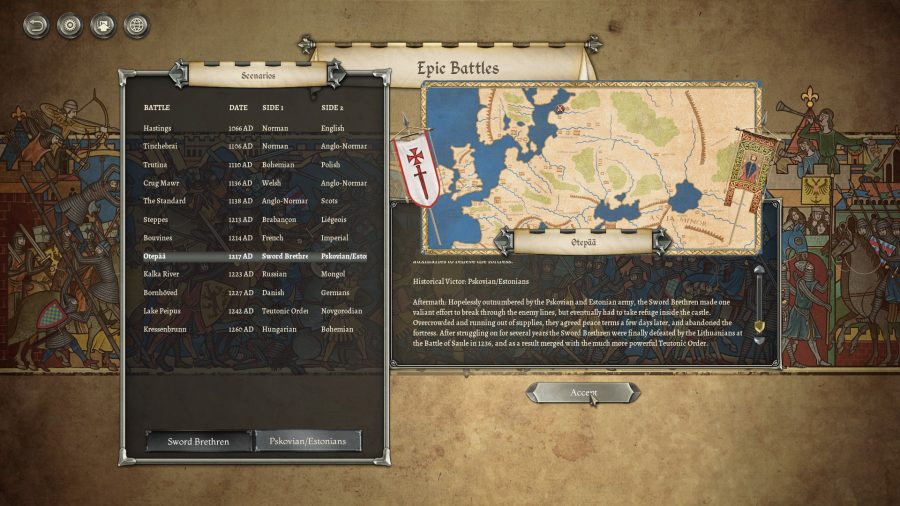 The third game’s the charm, but the Brother Knights have yet to win, all because of what I’ve seen before. Obviously, they are outnumbered, and although the knights are rated Superior and Highly Superior in quality, they are pitifully slow and encumbered by an “Unmanoeuvrable” classification. This makes turning painful, with no free wheel at the end of the turn, as is normal. Most medieval heavy foot is in the same boat, labeled “Undrilled.”

Ancient knowledge: These are the best medieval warfare books

Thus, medieval knights charging across two turns can be devastating, but only if you can somehow pin your foe into not moving, and manage to charge straight ahead yourself. Against similar armies of equal size, that’s a pretty even contest, but against armies from the east, things get dicey. 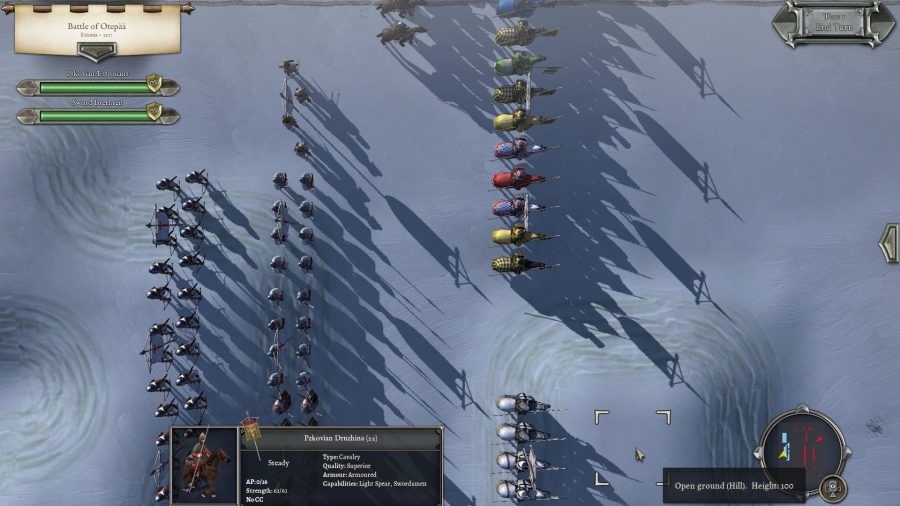 These armies have a lot of bow-armed light cavalry that simply evade if you advance on them, and a lot of light infantry with ranged weapons that do likewise. Neither carry the dreaded “Unmanoeuvrable” penalty, either. So the situation becomes… well, pretty historical. Can the knights close and trample everyone before they get shot to pieces? Can they save Castle Otepaa?

If you want to know why the Mongols caused heart attacks, buy this game

So far, nope. And then you have Mongols, who enjoy all the advantages noted above, but also have some solid, heavy, knightly-class cavalry of their own, triple-armed and unencumbered in the manoeuvrability department. If you would like a very painful blow-by-blow description of my efforts against these cheating, lowlife, ass-kicking churls, check out my previous “first look” article.

It threw the Mongols against the forces of the Holy Roman Empire and der Kaiser was anything but pleased. Fortunately, that was only the preliminary bout, because for my next match we’ll assume the Asian hordes make it across the Rhine and meet flower of French chivalry. Christian honor demands it! Sorta. But, on a serious note, if you want to know why the Mongols caused heart attacks back then, get this game. 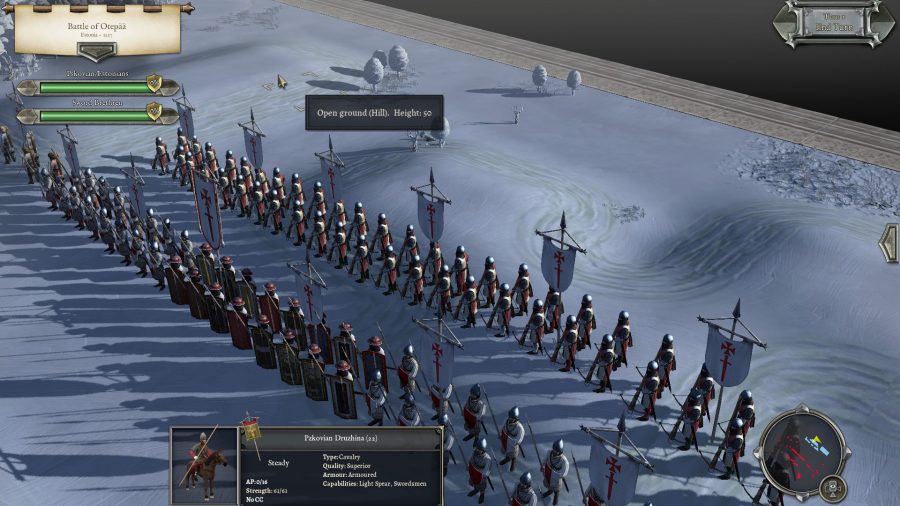 FOG2M seems like the start of something grand. I see in its future a sparkly, Little Big Men Studios-centric super-mod, not to mention DLC galore.

These should include the tabletop Supplements Eternal Empire (the Ottomans at War), Swords and Scimitars(the Crusades), Storm of Arrows (late medieval) and Blood and Gold (Mayans, Incas, and Aztecs).

Dicey encounters: Our guide to the best war board games

And, while I don’t yet know the dollar cost (florins, livres and ducats also accepted) FOG2M will finally run. If you have any interest in this period, find the cash. FOG2M may not have the uber-animation of Total War Medieval, but it is easy to learn, easy to play, plays realistically and conveys historical results. It looks spectacular and very historical, even if you are trashed by the Mongols. A lot.

But perhaps the biggest recommendation is this: my first love is miniatures, but right now I have at least half a dozen ancient and medieval armies on the shelf, still in the plastic bags they filled on the day I bought them. Because of this game and product line, not one of them will ever see a paintbrush. Any questions?