Hearts of Iron 4’s forthcoming 1.11 ‘Barbarossa’ update will make some pretty meaningful alterations to the game’s critical combat width mechanic, the way armour-piercing attacks work, and the reliability stat for divisions, according to the latest dev diary, posted on developer Paradox’s Forum on Wednesday. There is still no announced release date for either the Barbarossa update or the accompanying, unnamed DLC.

For most of the game’s lifetime, combat width (how many troops can effectively fight across the border between one in-game province and another, at the same time) has remained at 80 for almost all terrain types, meaning players were at a heavy disadvantage if they designed their army divisions to have any combat width other than 20 or 40.

Now, the post says, in a bid to “shake up the 40/20 width meta”, many terrain types are having their maximum combat width tweaked away from multiples of ten, to encourage different shapes and sizes of divisions to be used. Provinces’ width stats will now range from 75 (mountains) up to 96 (urban). Plains provinces get a new combat width of 90.

The post also reveals the developers are “looking at reducing the overstacking penalty” applied to armies that have too many fighting divisions for the width of the province they’re in. This, too, would be an additional measure to ensure players don’t simply use the same division templates over and over, it says.

The classic ‘40-width armour’ division is also getting a nerf, as part of efforts to encourage a wider variety of division layouts. Previously, 40-width divisions with concentrated damage were disproportionately powerful in the game’s combat arithmetic – but the post says this is now being balanced out – on the one hand, by having these larger divisions receive a larger share of all incoming damage, and, on the other, by spreading out their damage output more broadly across enemy units. 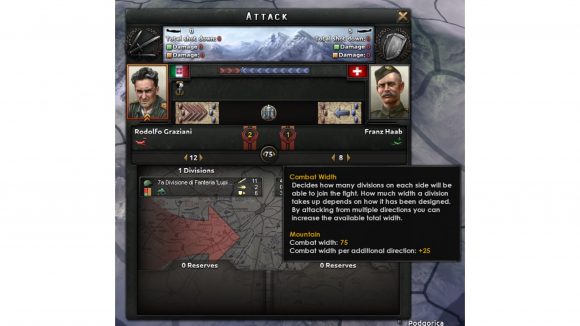 In the armour piercing department, Paradox is adding more of a sliding scale of damage to reflect different levels of armour, versus armour piercing. Previously, this simply meant you did half normal damage if the armour value was higher than your attack’s piercing value, and full damage if not – meaning you only needed one more point of piercing, compared to your opponent’s armour, to make their armour totally irrelevant.

With the Barbarossa update, as long as your armour value is above 75% of the attacker’s piercing value, you’ll get a damage debuff proportional to how far above 75% it is (to a maximum of the original half damage) – meaning a lot of different tank divisions just got a good chunk more survivable, in the face of legions of chaff infantry with cheap anti-tank guns. 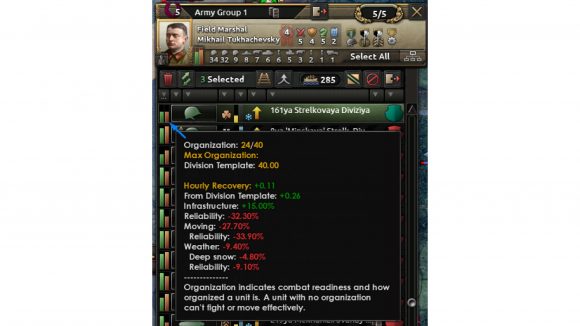 The reliability stat is also getting beefed up, primarily in order to add some extra consideration and meaningful trade-offs to the process of creating your own vehicles in the new tank designer, coming in the next DLC.

A good reliability stat on a division will reduce losses from attrition, as before – but it’ll now also give units back a certain number of vehicles at the end of a combat, to represent greater ease of repairs – while a poor reliability stat will drag down organisation regeneration while moving, and significantly worsen all the negative effects from bad weather conditions. 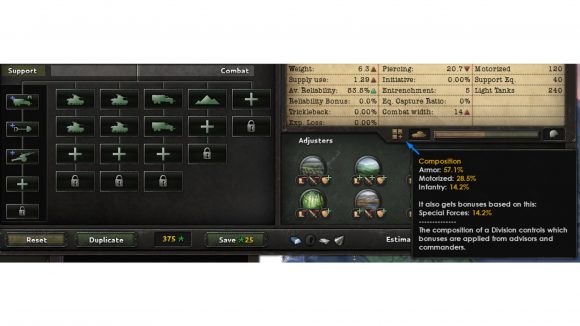 There will also be changes to the division-wide attack and defence bonuses applied to specific unit types when the player chooses a certain High Command member, the post says. Previously, a behind-the-scenes calculation determined if a certain division qualified to get the appropriate composition bonus.

With this update, Paradox says, the division’s composition between different battalion types will instead be worked out as a “straight up ratio”, and displayed to the player in the division designer screen (as shown above). The equipment levels of each battalion will be factored in, too – in other words, a tank battalion with no tanks in it won’t count as a tank battalion for the bonus (sorry).