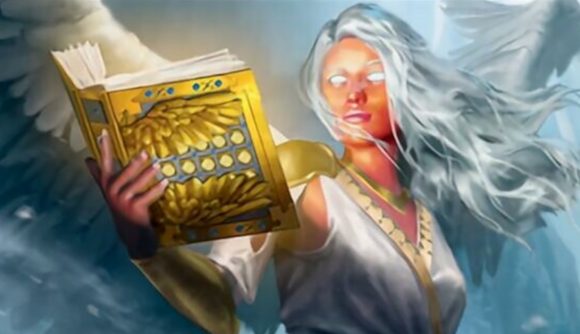 The next card to be banned from Magic: The Gathering Arena’s Standard 2022 format, and the first ban of the trading card game‘s recently-released Adventures in the Forgotten Realms set, has been revealed. The Book of Exalted Deeds will be kicked from Arena’s exclusive best-of-one format on July 16 following balancing issues when paired with a Kaldheim Land card. Wizards made the announcement in an official MTG blog post yesterday.

Currently, combining The Book of Exalted Deeds with the Snow Land card Faceless Haven effectively prevents you from losing the game. Players can activate Faceless Haven to temporarily transform it from a Land into a Creature, and place a counter on it using The Book of Exalted Deeds. This counter reads: “You can’t lose the game and your opponents can’t win the game”, and will remain on Faceless Haven after it reverts back to a Land. Given the few plausible means of destroying a Land card in current Standard rotation, the combination of cards is a powerful one.

Although the pairing has not had an obvious impact on MTG Arena’s metagame, Wizards said the combination made for “a very frustrating experience”, in which neither player could win or lose the game, until the other decided to concede.

The Book of Exalted Deeds is still playable in other MTG Arena formats, including regular Standard and Historic, and Wizards said the card will not necessarily remain banned following the release of Innistrad: Midnight Hunt later in the year. This could be an indication that the upcoming set will introduce more cards capable of destroying lands. 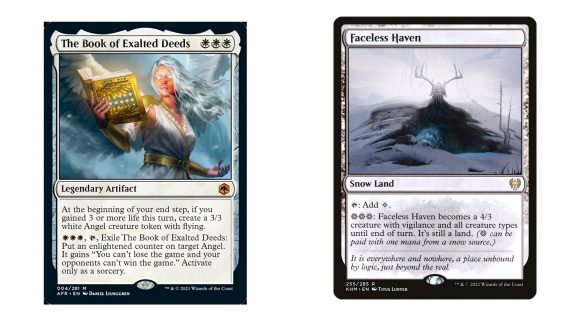 Wizards says it will not be issuing any Wildcard refunds to replace the card, since it is still usable in formats outside of Standard 2022.

The soon-to-be banned card isn’t yet available on the tabletop, with Adventures Forgotten Realms scheduled to release physically on July 23.

To sharpen your summoning wits, read our MTG Commander guide on building a deck for the popular format, or check out our walkthrough of how to build an MTG deck if you’re a complete beginner.