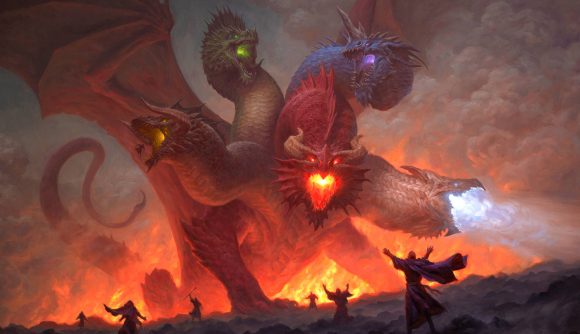 The release of Magic: The Gathering’s first D&D crossover set, Adventures in the Forgotten Realms, is only a month away. We’ve already seen a steady stream of card spoilers showing off the set’s Showcase artwork and familiar D&D characters, but Adventures in the Forgotten Realms will also contain cards in a new, exclusive art variant, available only at specific local game stores.

Revealed by Wizards of the Coast yesterday, so-called ‘ampersand cards’ will feature the ampersand of the D&D logo superimposed on them in a transparent gloss overlay. It looks something like a watermark on a stock image. Every Rare and Mythic Rare card in the upcoming set will be printed in the variant art style, but will only be distributed by qualifying stores.

Wizards is styling the cards as ‘exclusive’, and will reportedly be giving two copies of every ampersand card to all Wizards Play Network (WPN) Premium stores, when the set launches on July 23. Qualifying shops will be able to hand out the cards as prizes for in-store play events, or use them as promotional sales material, as they see fit.

So far, we’ve only seen an ampersand variant of Tiamat, but it gives a good indication of what the art style will look like. The D&D ampersand is positioned left on the card, enlarged to stretch across its surface, and covers both the artwork and description box. 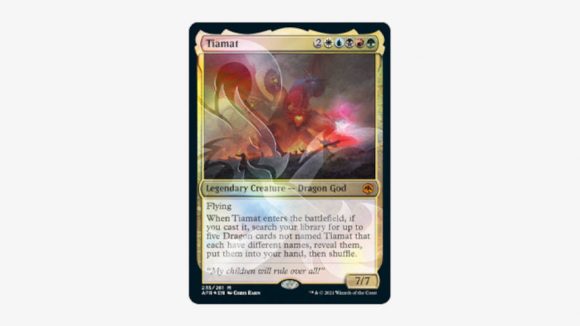 WPN is an affiliate initiative run by Wizards of the Coast. By signing up, local game stores are granted access to exclusive products, marketing material, and event access, such as MTG prereleases. WPN Premium is a second tier of the initiative that only larger stores can qualify for.

If you want to keep up to date with the latest card reveals, check out our Aventures in the Forgotten Realms spoilers list, where we’ll keep you updated on the latest drops. Or, read our guide to building a Magic: The Gathering Commander in preparation for the new set.