Magic: The Gathering’s next release is a little special. The first official crossover set with Dungeons and Dragons, Adventures in the Forgotten Realms will introduce many of the tabletop RPG’s famous characters and monsters to the trading card game. We’ve already glimpsed a few of the set’s cards, and collected this list of Adventures in the Forgotten Realms spoilers, so you can stay up-to-date with the latest reveals.

There’s plenty to be excited about. Containing 281 regular cards, 20 of those basic Lands, and a handful of Showcase cards, the set also promises to bring some mechanical innovations to MTG. Several classic D&D monsters and characters, including famed Dark Elf Fighter Drizzt Do’Urden, are getting bespoke artwork, and the set’s Lands will feature flavour text, styled as story prompts for roleplayers.

We’ve categorised all the Adventures in the Forgotten Realms spoilers below, so you can browse every the main, showcase, borderless, extended, and promo cards in one place. We’ll also be updating this list as more spoilers are revealed in the lead up to the set’s release on July 23, so be sure to check back.

Right now, though, let’s gaze into the eye of the Beholder. 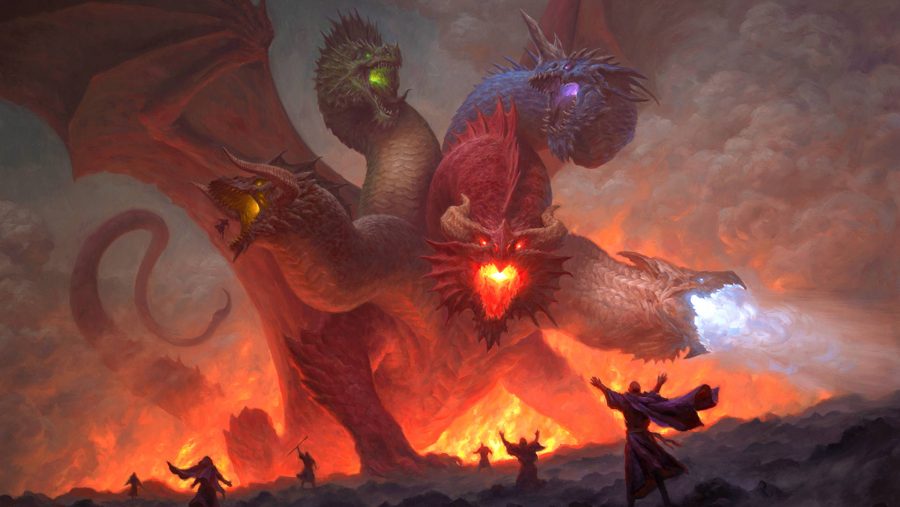 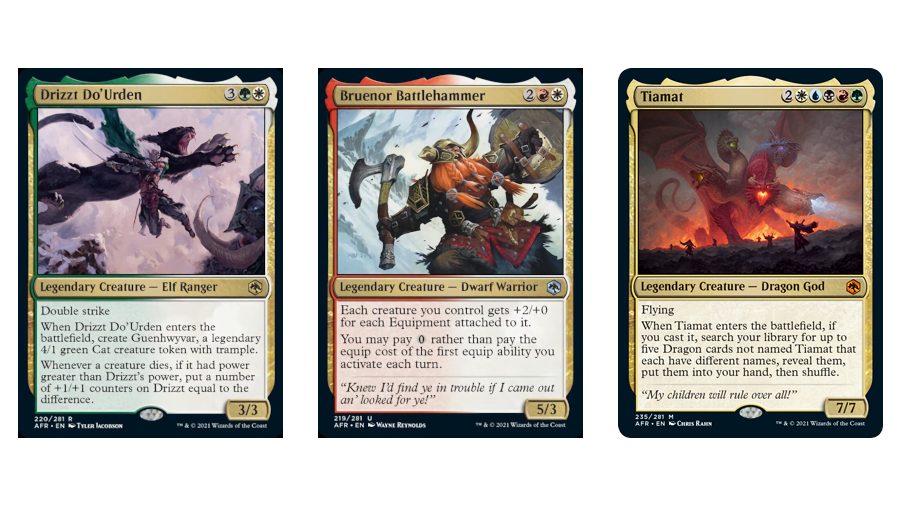 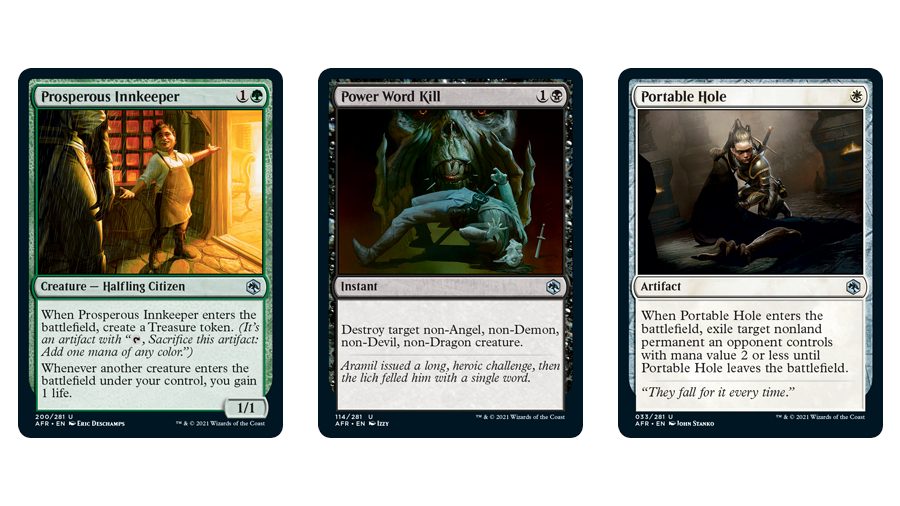 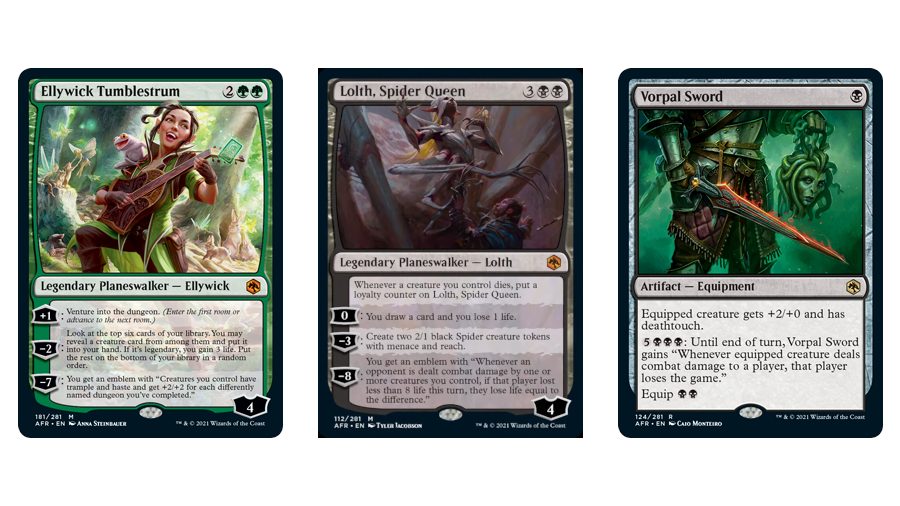 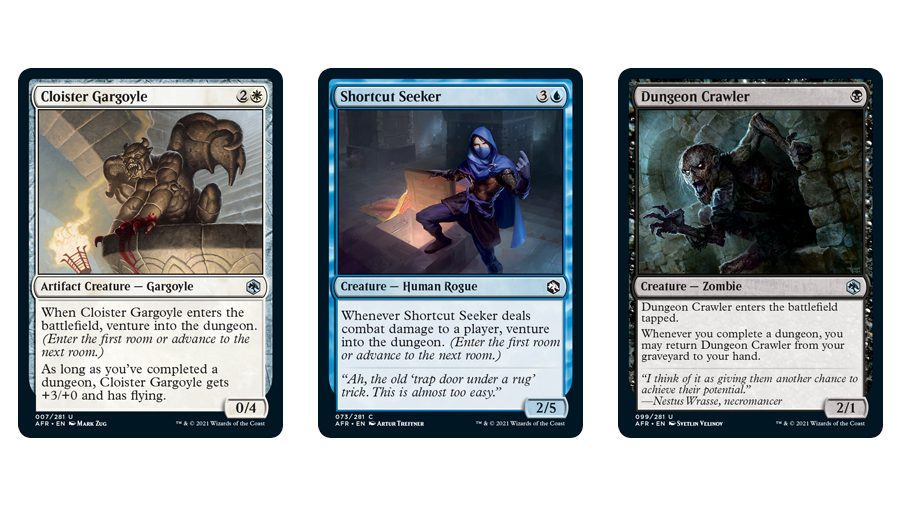 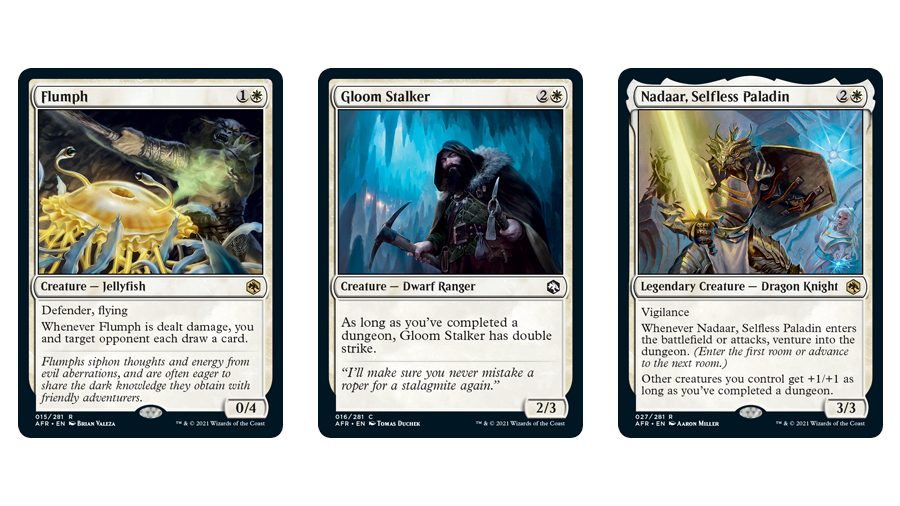 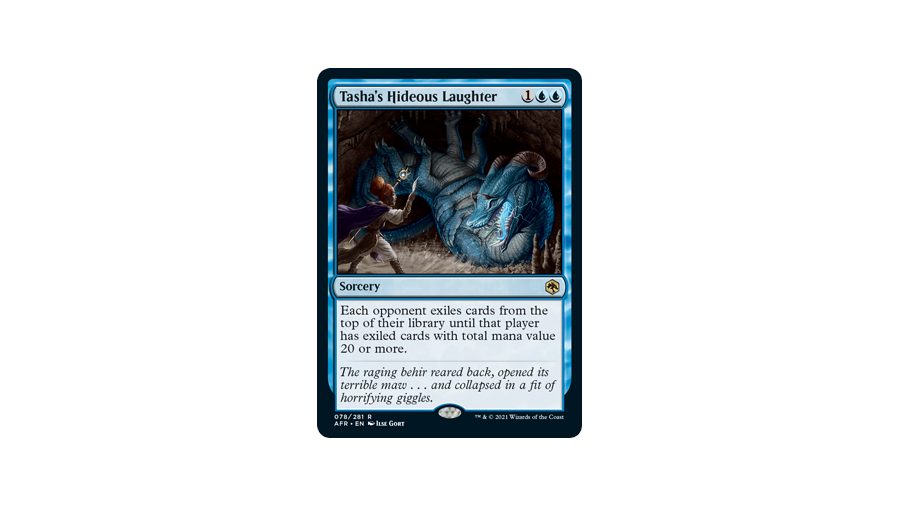 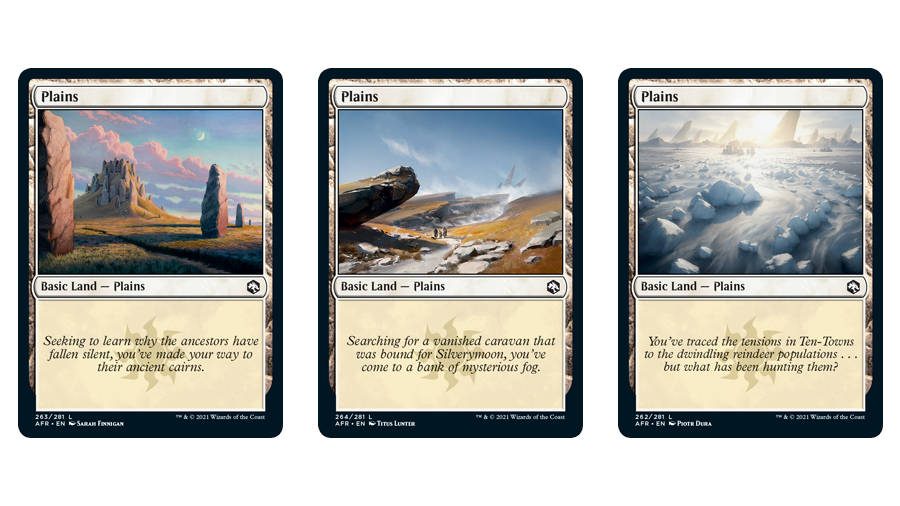 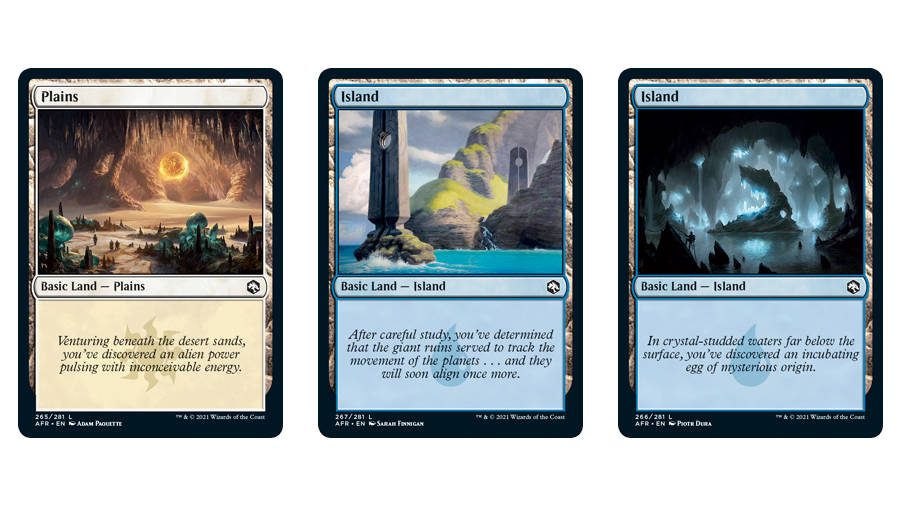 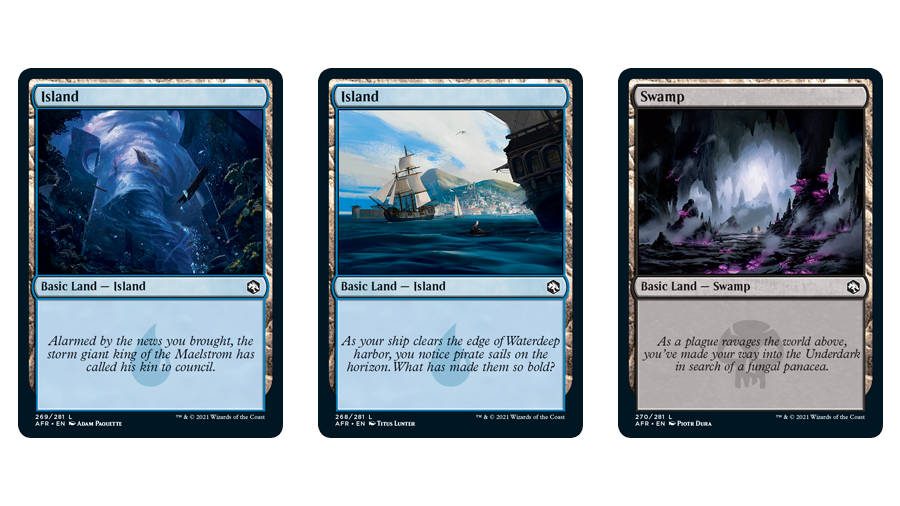 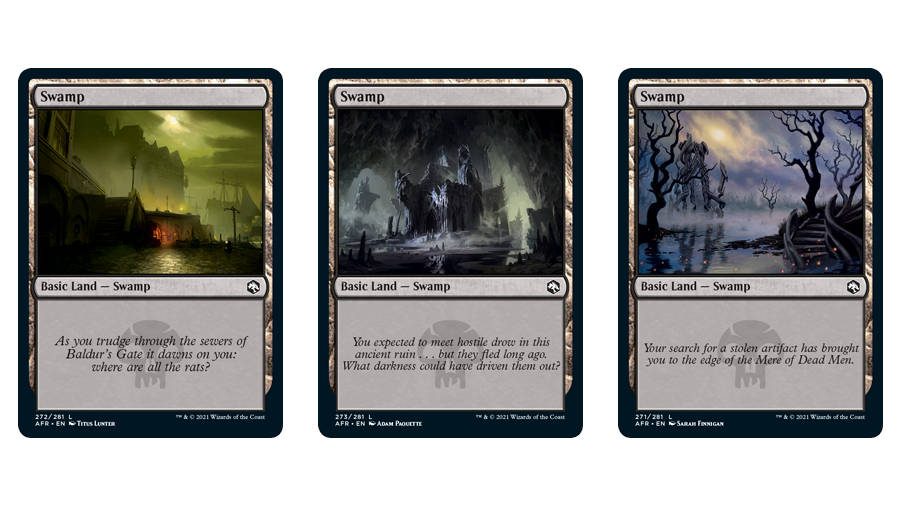 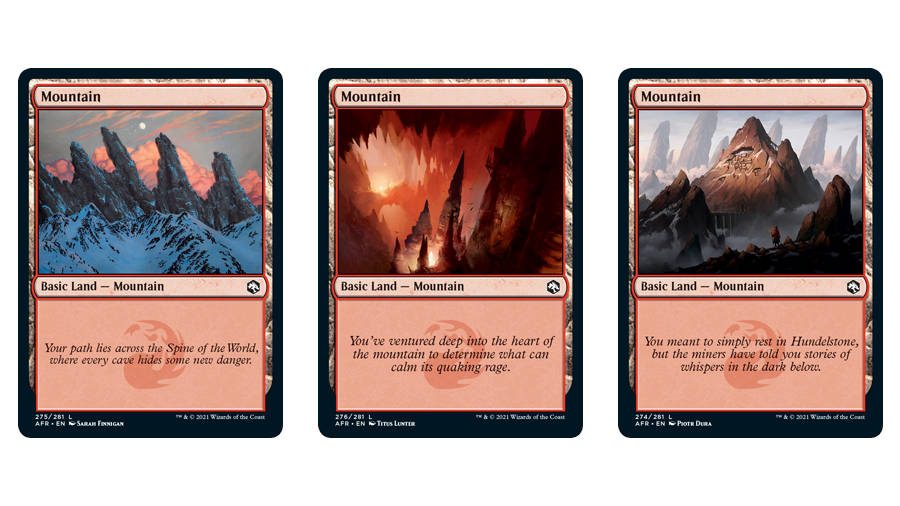 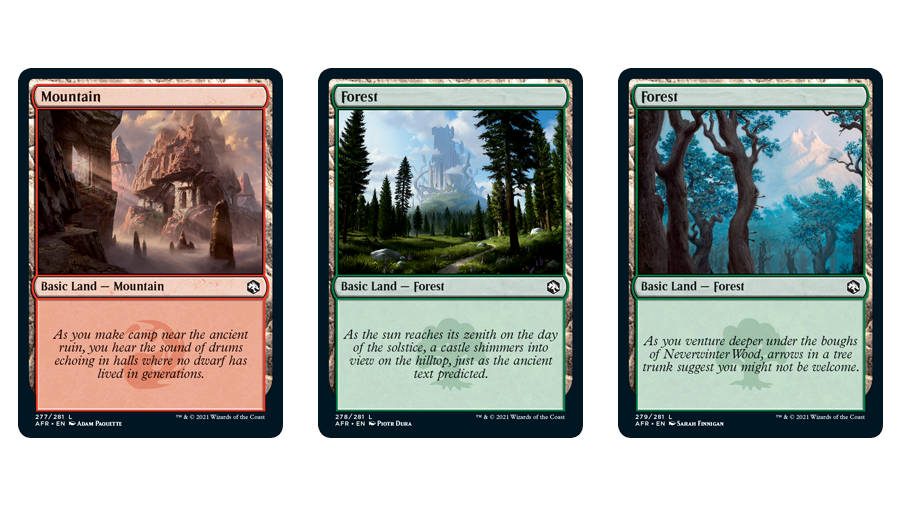 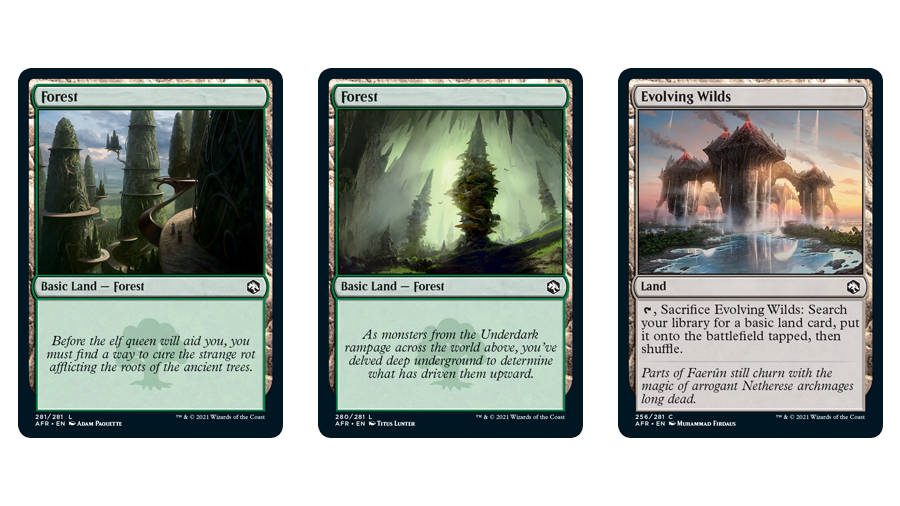 The showcase cards in this set are illustrated to emulate the hand-drawn pictures of old D&D monster manuals. Many infamous D&D monsters and characters will receive the frame. 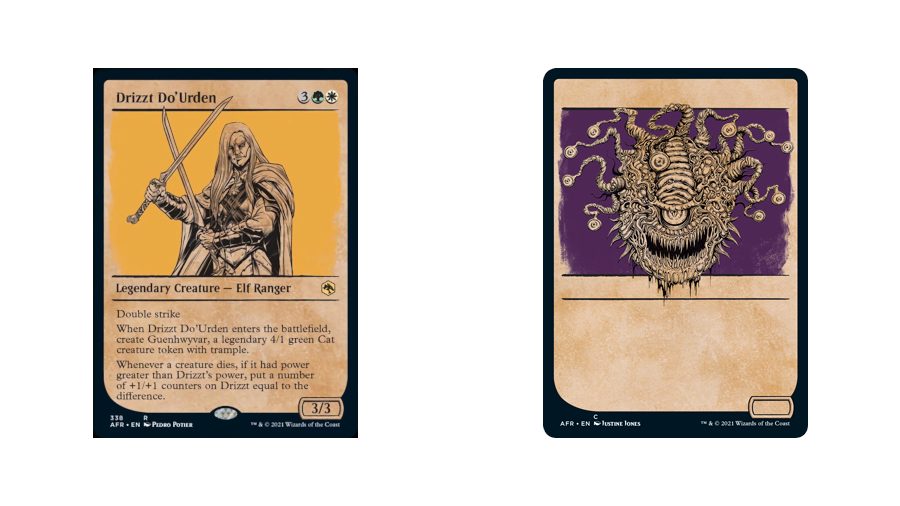 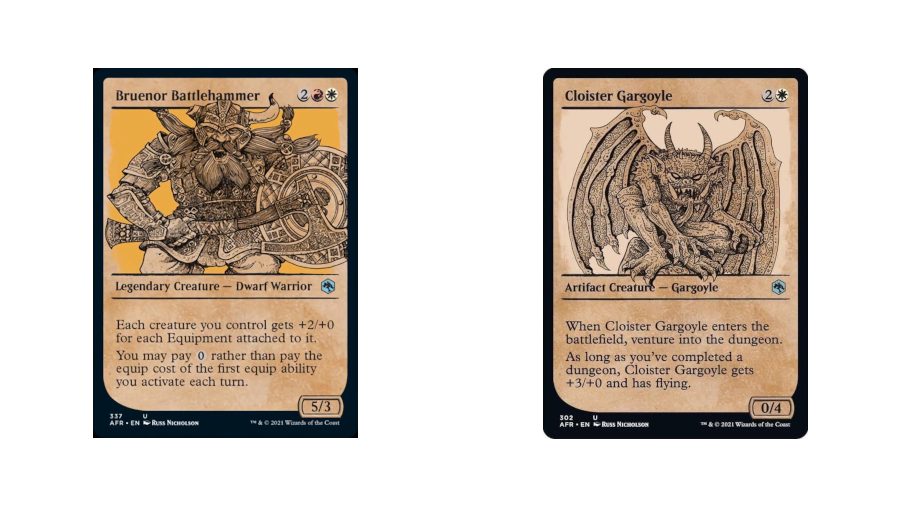 Borderless cards feature alternate-art that extends to the edges of the card. 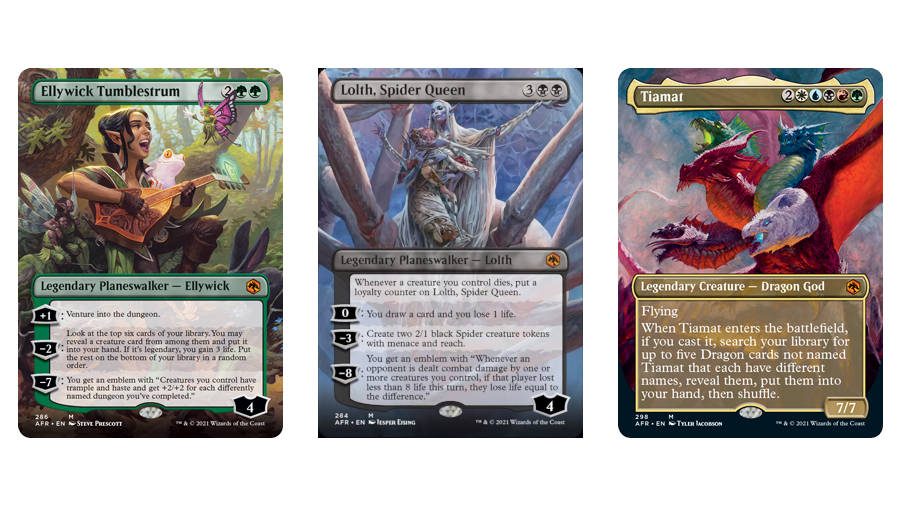 These cards extend the card’s standard artwork to its edges. 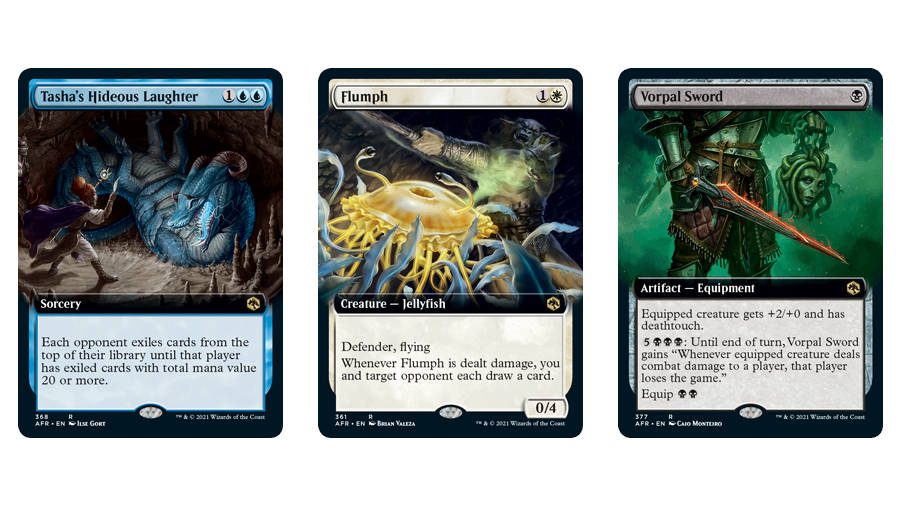 Adventures in the Forgotten Realms introduces new Dungeon cards, that players can explore mid-game for buffs and rewards using the Venture keyword ability. 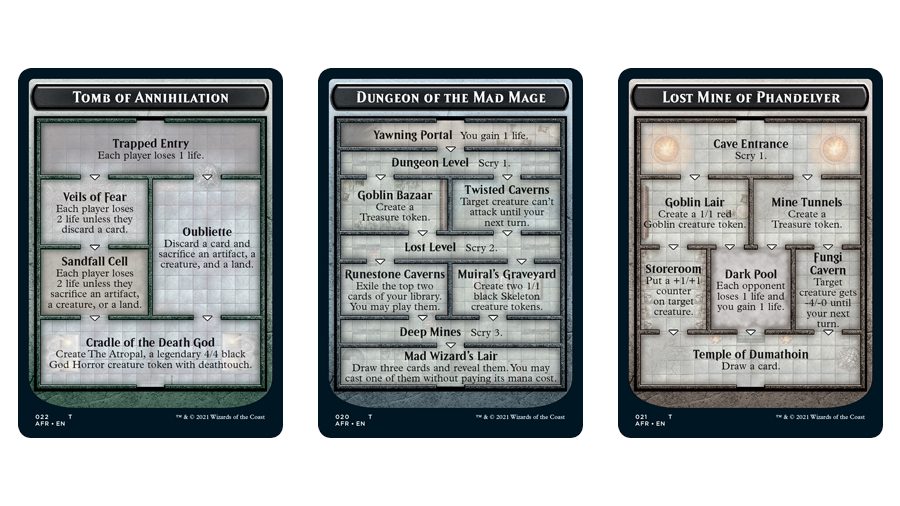 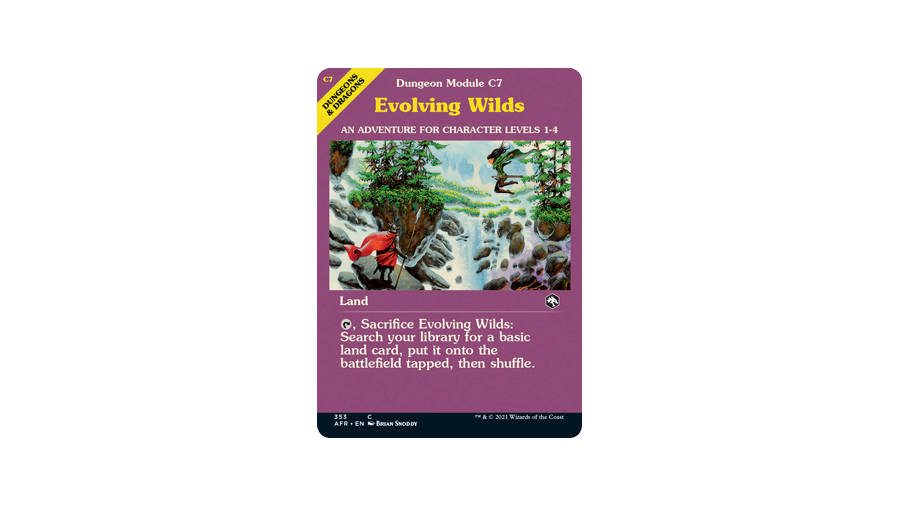 Only one promotional card has been revealed, the buy-a-box promo card Vorpal Sword. You’ll need to buy a booster box of MTG cards to get this one. 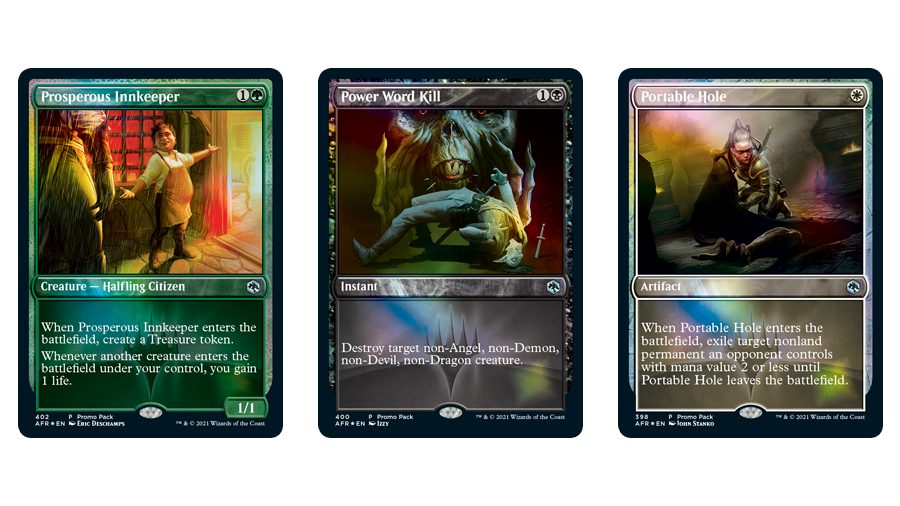 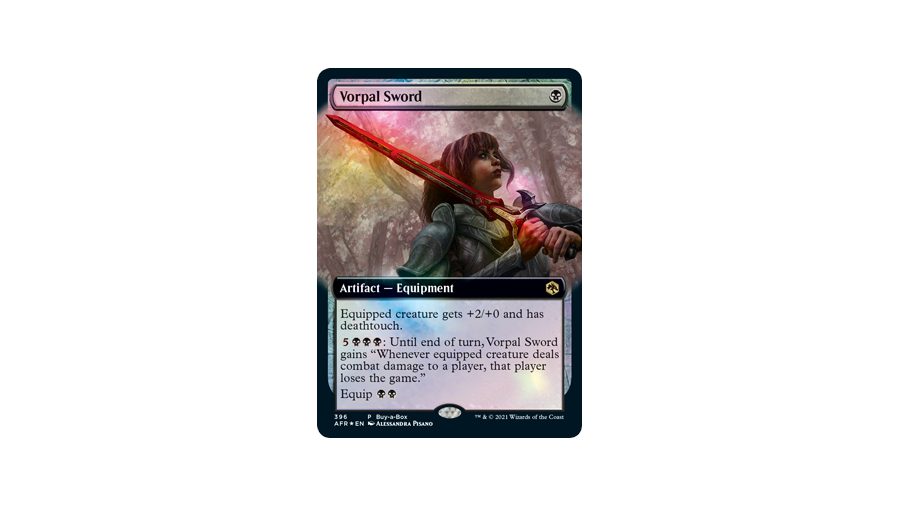 Adventures in the Forgotten Realms products

The usual draft, set, and collector boosters will be included in Adventures in the Forgotten Realms, as well as themed booster packs for each mana colour. A sixth, yet-to-be-revealed themed booster is also coming, alongside four preconstructed Commander decks.

Although content specifics haven’t been released, we know the four commander decks will be called: Aura of Courage, Dungeons of Death, Draconic Rage, and Planar Portal. Each is a full, 100-card Commander deck, including two foils, ten tokens, a life tracker, and a deck box. 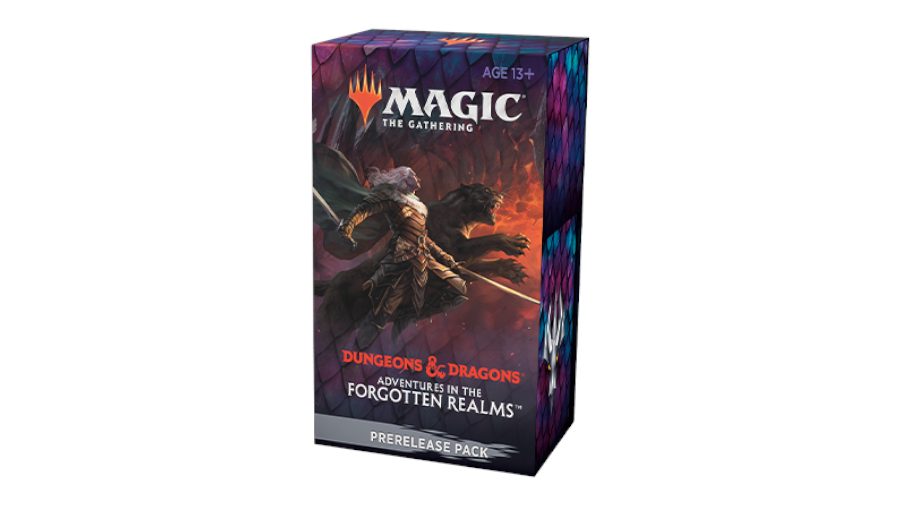 Pre-release packs will launch on July 16, and include six draft boosters, three foil ‘dungeon cards’, one deck box, and a d20. 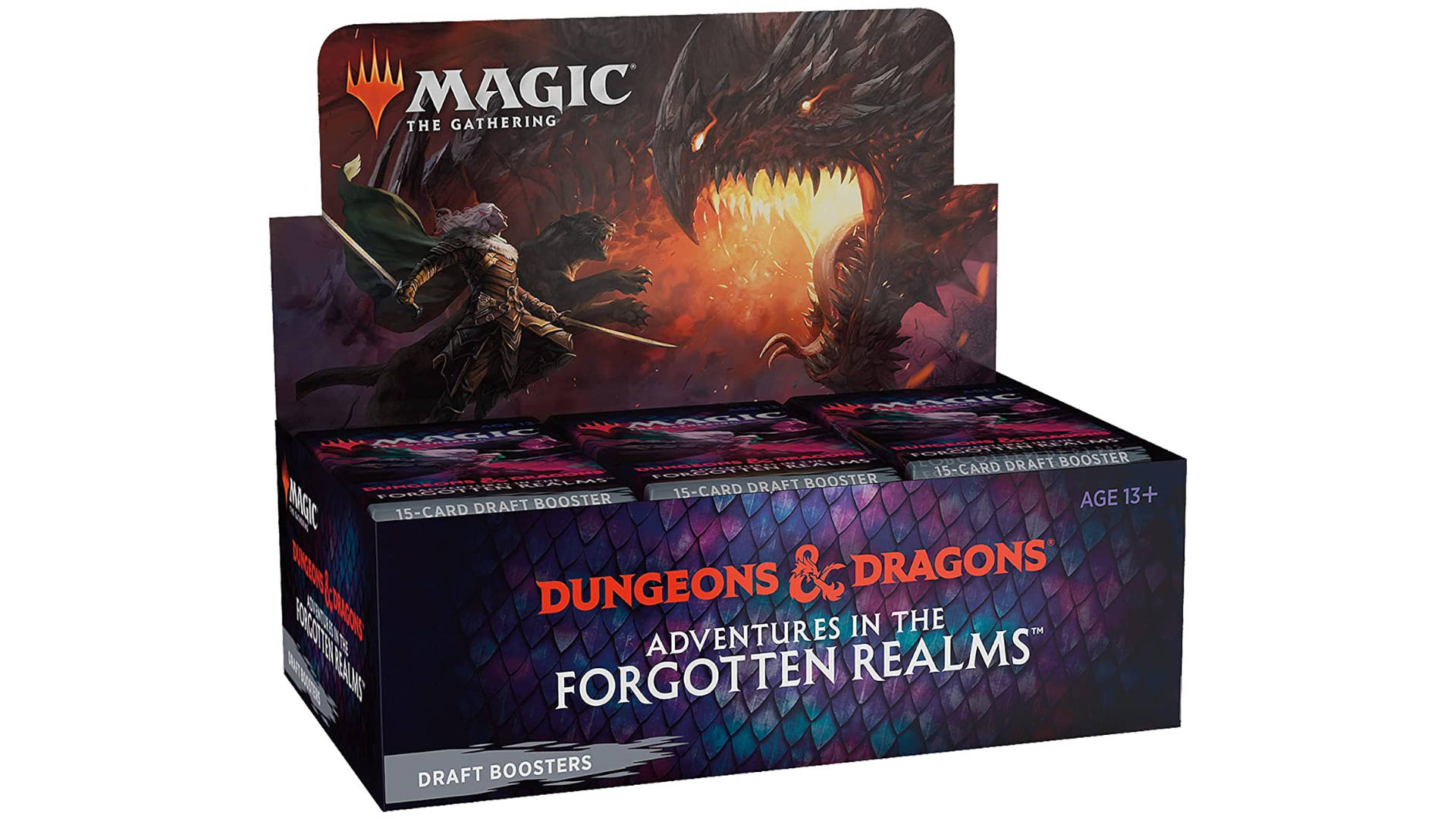 The set’s draft boosters contain the usual 15 cards, including one rare. 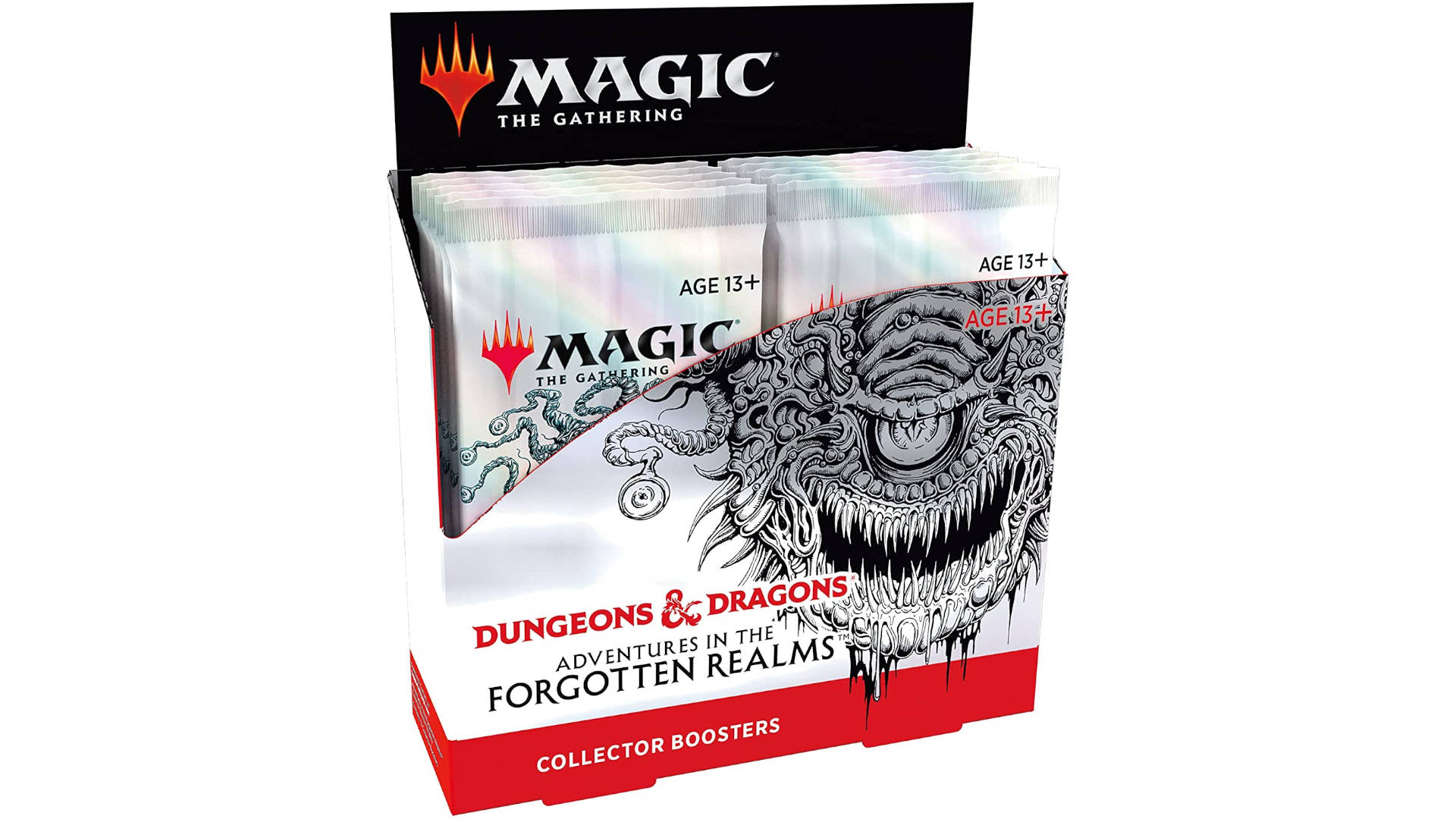 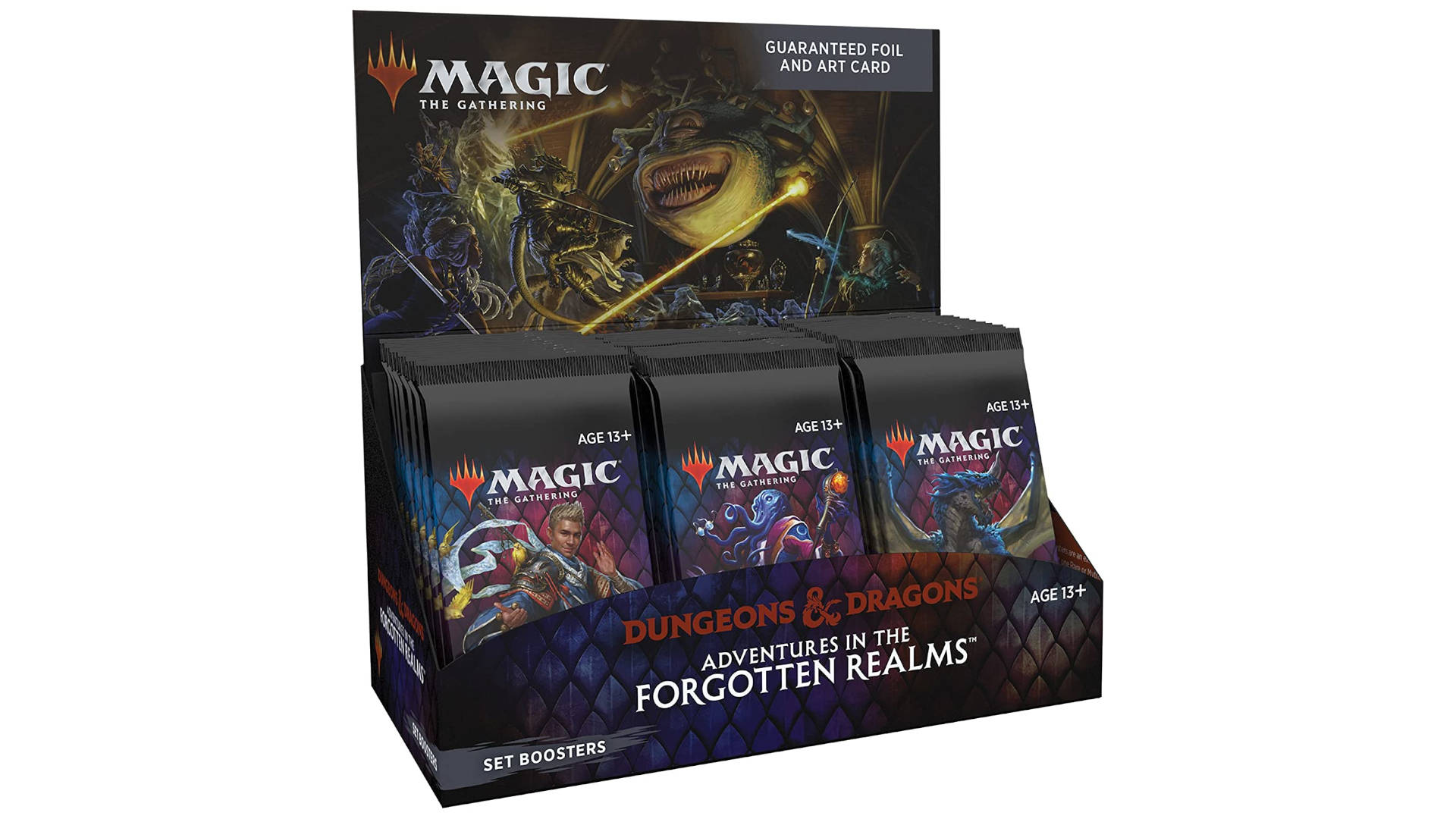 Set boosters will contain 12 cards, one art card, and a token or promo card. They’ll also include one to four mythic rares, and a foil per pack. 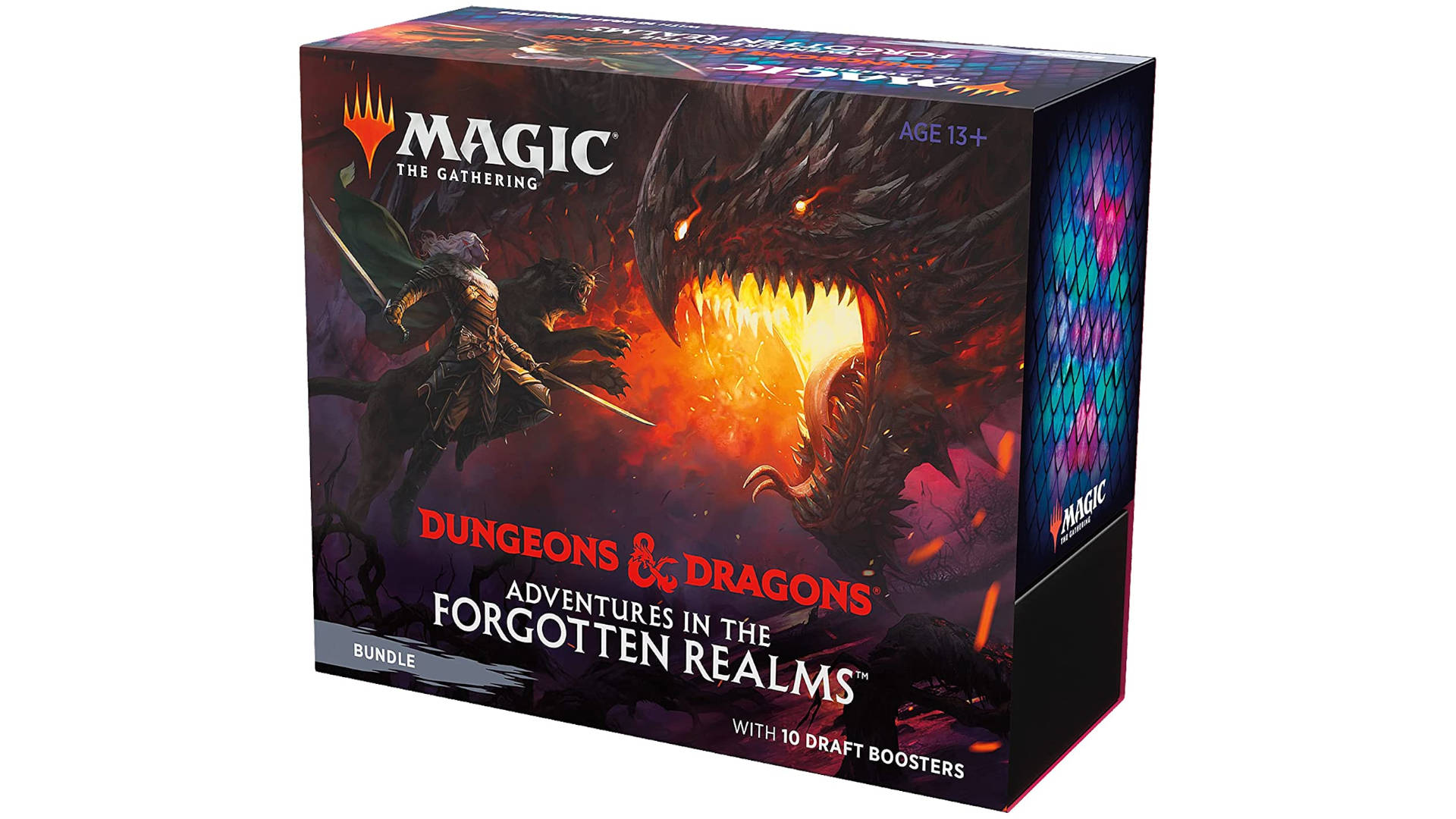