The new Dungeons don’t operate as normal MTG cards. Rather than granting a specific ability, they feature a branching pathway of rooms, each with its own ‘room ability’. Every time you activate the Venture keyword, which will appear on several cards in Adventures in the Forgotten Realms, you’ll progress through a dungeon, exploring another room, and activating whatever ability is inside.

Some of these abilities include creating a creature token, scrying a number of cards, drawing from your deck, or removing life from your opponent. If you manage to reach the final room, that dungeon is completed, letting you set forth in a new one. Completing dungeons also grants certain benefits, such as activating the abilities of other cards in your deck. Gloom Stalker, for example, is gains double strike once you’ve completed any dungeon.

According to the blog post, you’ll be able to track your progress in the dungeons using a token, moving it between rooms as you progress through its hallways. Each player has access to three dungeon cards, which will start outside of their deck in their sideboard, but won’t take up any sideboard slots. You can explore any dungeon you choose, but can’t venture into a new one until you’ve completed your current expedition. 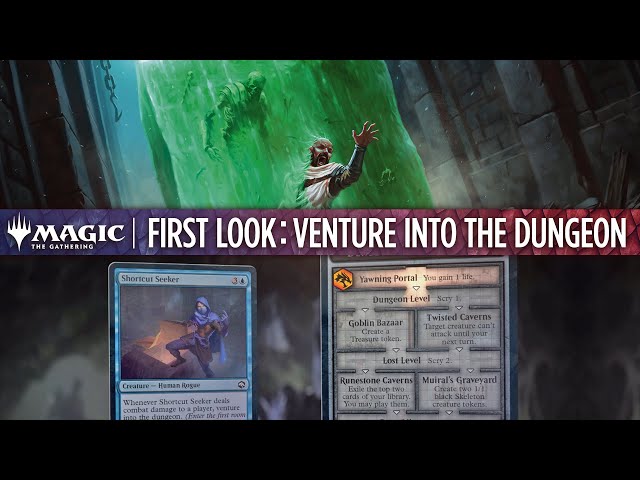 There’s no way to interfere with your opponents’ dungeon crawling, although the blog post hints that this may be introduced in future sets. You also can’t move backwards through the dungeon for extra buffs.

Three dungeons will be included in Adventures of the Forgotten Realms, all named after existing D&D releases: Tomb of Annihilation, Dungeon of the Mad Mage, and Lost Mine of Phandelver (the location of the D&D starter set).

The Venture keyword will be included across card types, including legendary and common creatures, and can be triggered by the effect of a spell, an activated ability, or an ability prompt, such as attacking your opponent with a specific card.

These are the first details we’ve seen of the dungeon crawling mechanic, but we’ve glimpsed several more Adventures in the Forgotten Realms spoilers before. Wizards previously showed off several famous D&D characters that will be included in the set, including everyone’s favourite Drow Fighter Drizzt Do’Urden.

We’ve also had hints the upcoming set will include cards for beloved duo Minsc and Boo, who first made their appearance in the classic videogame RPG Baldur’s Gate.

Adventures in the Forgotten Realms will release on MTG Arena on July 15, and physically launch on July 23.