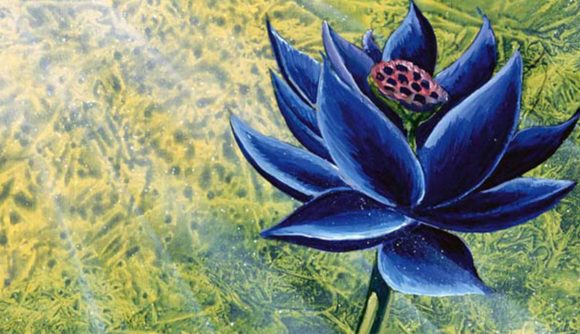 One of Magic: The Gathering’s most infamous cards was auctioned yesterday for over $200,000 / £145,900. The mint-condition Black Lotus Alpha card, which bears the signature of its famed illustrator Christopher Rush, was auctioned for the high price on eBay, but failed to exceed the seller’s reserve price necessary to finalise the sale.

An original Black Lotus that was released as part of MTG’s first print run in 1993, the card was listed as in PSA 10 ‘Gem Mint’ condition. A powerful card that has since been banned in most official formats and tournaments, the Black Lotus has taken on legendary status in the trading card game’s community for its rarity and notoriety. Rush, as well as being the illustrator of the card,also holds a special place in MTG history for designing over 100 cards in the game’s early sets and creating its five mana symbols.

Had they clinched the card, they would also have had to shell out $7,500 / £5,471 for delivery, which may appear relatively meagre next to the card’s final price. However, the eBay listing also said the card would be delivered by the seller in person, given its high value.

Seller Vintage Magic – a US business that deals with appraising, consigning, and selling valuable MTG stock – claims the card is one of only two signed Black Lotus Alpha cards in existence. The other, presumably, being the autographed Black Lotus that sold in January earlier this year for $511,000 / £372,771, becoming the most expensive Magic: The Gathering card ever sold at auction. 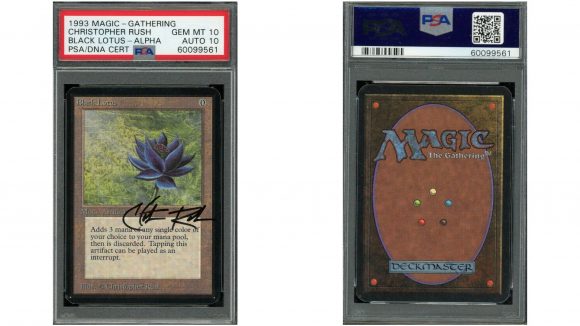 For more eye-watering prices, check out the most expensive Pokemon cards to have sold around the world. Or, read our guide to building a Magic: The Gathering deck if all this talk of valuable cardstock has piqued your interest in the game.