Rare Magic: The Gathering cards can be expensive at the best of times, but leave them in a safe place for 30 years, and the very rarest MTG cards take on a whole other level of value. Much like their Pokémon counterparts, some rare MTG cards have become ultra-valuable, prized items, ballooning in price on the second-hand market, as keen collectors snap up the most valuable Magic: The Gathering cards for headache-inducing sums.

But not all licensed, rectangular pieces of cardstock become cherished goods. To help you determine the value of your collection, and bask in the sheer enormity of some peoples’ wallets, we’ve compiled a list of the most expensive Magic cards and rarest finds available.

While many of the cards have powerful abilities, most are prized because of their age and scarcity, with many appearing in the trading card game’s first print run back in 1993. If you snapped up a MTG set in the ‘90s, and have left it gathering dust at the back of your cupboard for the last couple of decades, you might be in with a chance of a quick buck (or thousand). It’s always a long shot, mind – but probably worth checking.

And even if you never touched an MTG card until recently, some of these cards are likely to be familiar.

These are the rarest and most expensive Magic: The Gathering cards: 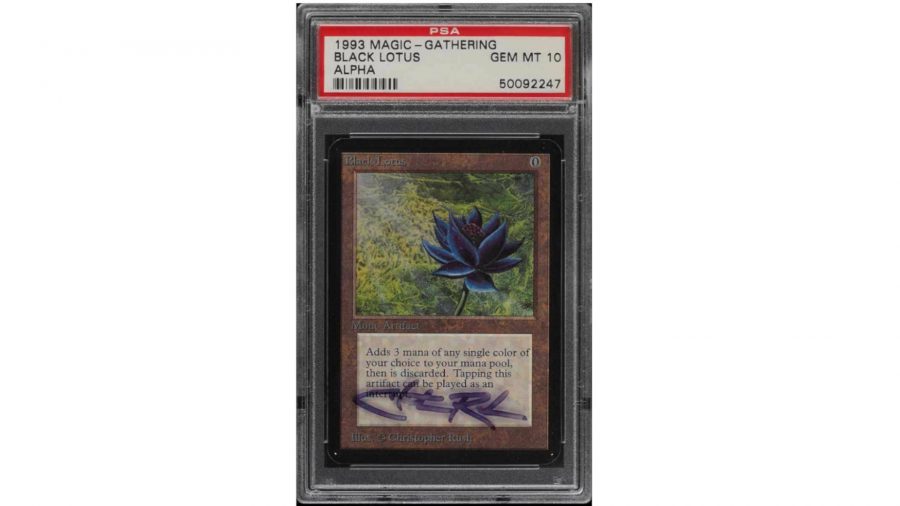 Magic: The Gathering’s most famous flower is also its most prized card. Long coveted as a collector’s piece, a mint-condition Black Lotus from the game’s 1993 Alpha set (the first print run of MTG’s original core set), signed by illustrator Christopher Rush, sold for a whopping $511,100 / £360,427 in an eBay auction in January 2021. That makes this Black Lotus the most expensive MTG card ever sold.

Format change: This is how to build an MTG Commander deck

Besides its mythos, the card’s prized for its powerful effect. An Artifact that requires no mana to play, Black Lotus adds three mana of any colour to your pool, letting you cast powerful spells rapidly in the early game. It’s also earned a spot on the game’s Reserved List – a selection of cards which will never be reprinted, keeping their price high on the second-hand market. 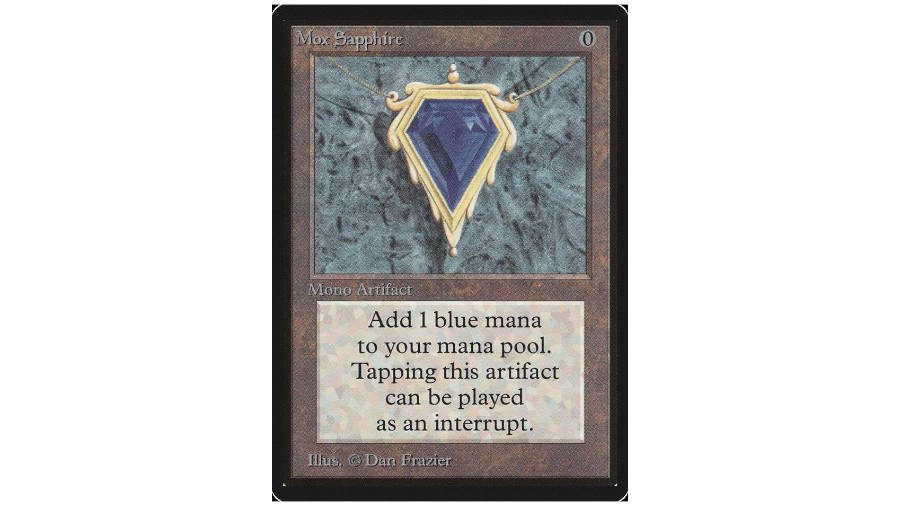 ‘Moxes’, as they’re now known, have been cropping up in auction houses for years. Rare artifact cards printed in MTG’s Alpha and Beta editions (the first and second printings of of the original core set), these snazzy pieces of jewellrey function similar to Lands, adding one mana of a single colour to your pool at no cost. However, while you can only play one Land per turn, you can slap down as many Moxes as you like, letting you build up a surge of mana, and unleash powerful spells before your opponent has the option of mounting a defence..

People have been clamouring for these pretties ever since their introduction. A mint Mox Sapphire, which provides blue mana, from the game’s Alpha set, lists upwards of $18,000 / £12,700 in 2021. You might think folks’d prefer to buy a real gemstone with that money. 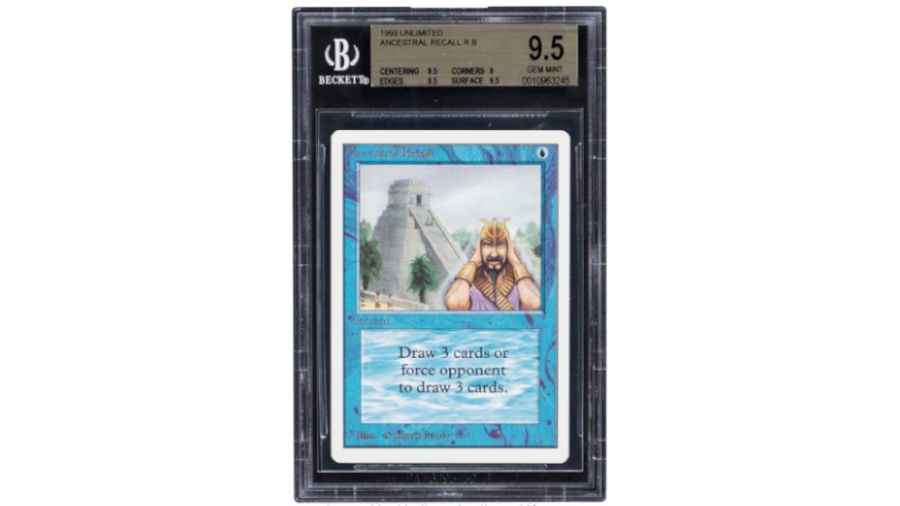 Another oldie – although it might not possess the same fame as Black Lotus, Ancestral Recall packs all the same utility. Letting you draw three cards for one blue mana, it’s one of the best draw cards in the game, and effective for getting the advantage on your opponent.

Copies of Ancestral Recall, taken from MTG’s Alpha and Beta editions are listed for sale at around $20,000 / £14.100 in 2021, with near-mint versions going for significantly more. 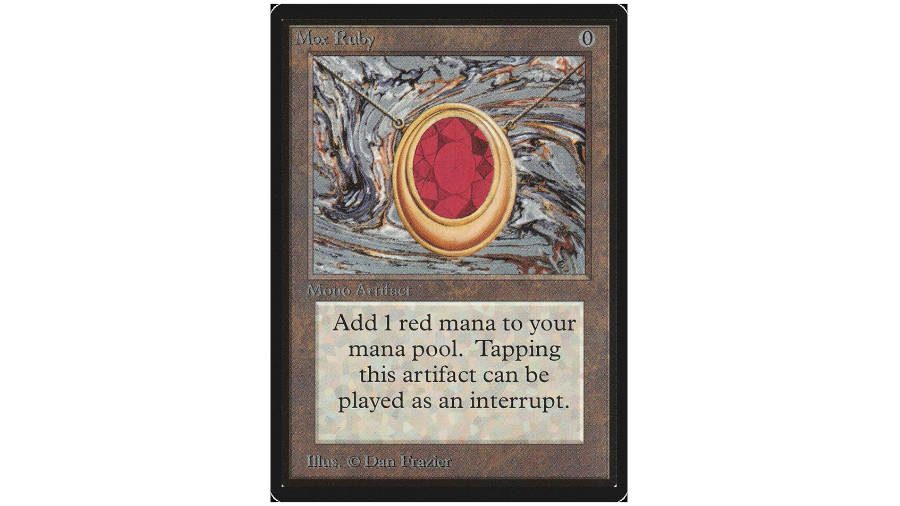 Another of the coveted stones, the Mox Ruby matches the Mox Sapphire in effect, fame, and prettiness, but not colour: this one is read instead of blue, and produces red mana. There’s little distinction between the Moxes, but Alpha and Beta Mox Ruby cards are usually listed at around $10,000 USD / £7,000 in 2021. Maybe sapphires are just a little more chic. 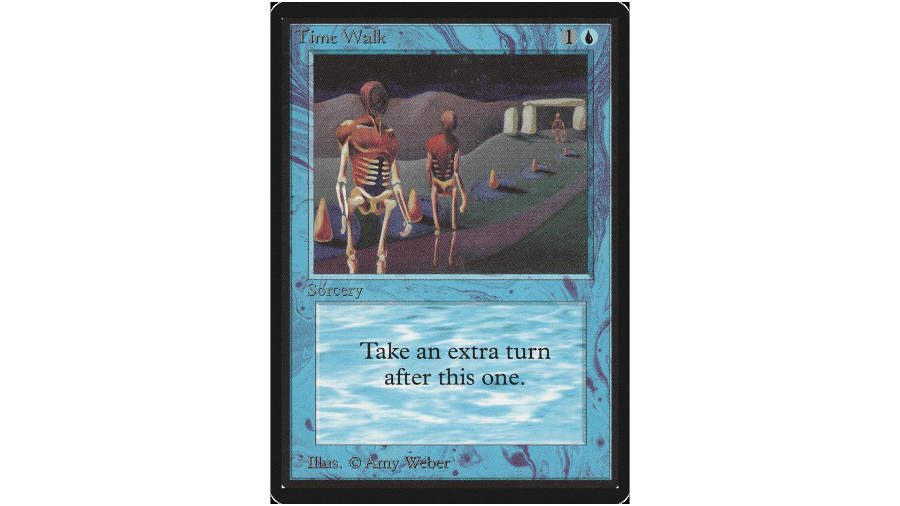 A straightforward rulebreaker, Time Walk let you take an extra turn for two mana. Play another one straight after, and it’s not too hard to see why this card was quickly added to the game’s list of banned cards after its release in Alpha.

Free cards: Use these MTG Arena codes to unlock freebies

Copies of Time Walk Alpha editions crop up from time to time, and usually sell for anywhere between a couple of thousand dollars to $10,000 / £7,000, depending on their condition. 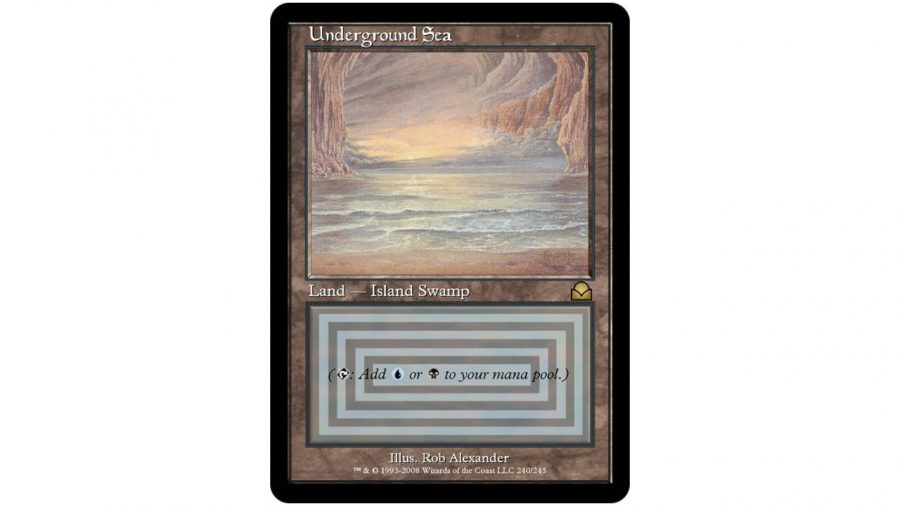 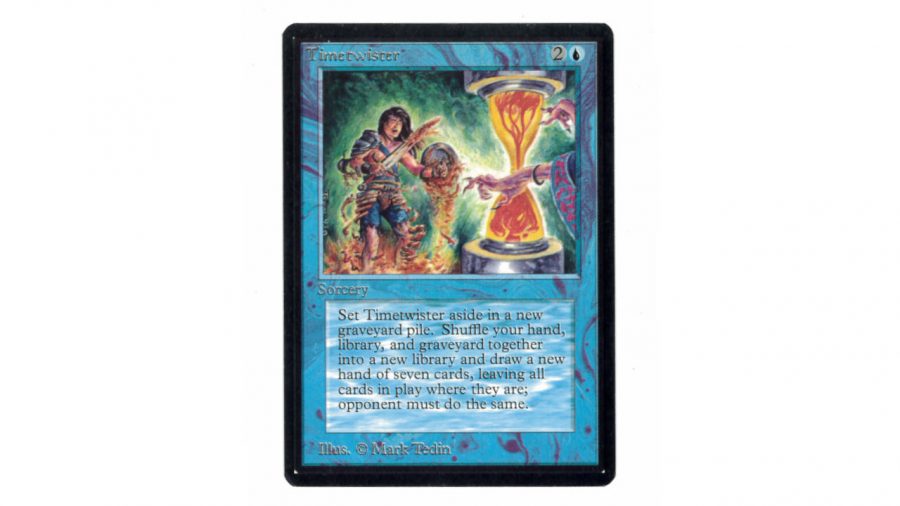 The only Sorcery card to make the cut, Timetwister is the ultimate reset card. When played, you’ll combine your hand, library, and graveyard, give the deck a good shuffle, and draw a fresh seven-card hand. Then, your opponent gets to do the same. Although the player area doesn’t change, it’s a powerful means of mixing up the game’s balance, and rolling the dice on a lucky hand.

Digital decks: These are the best MTG Arena decks

Placed on the Reserved List, Timetwister’s price has gradually increased over the last few years, sitting comfortably around the $9,000 / £6,346 mark, and continues to rise. 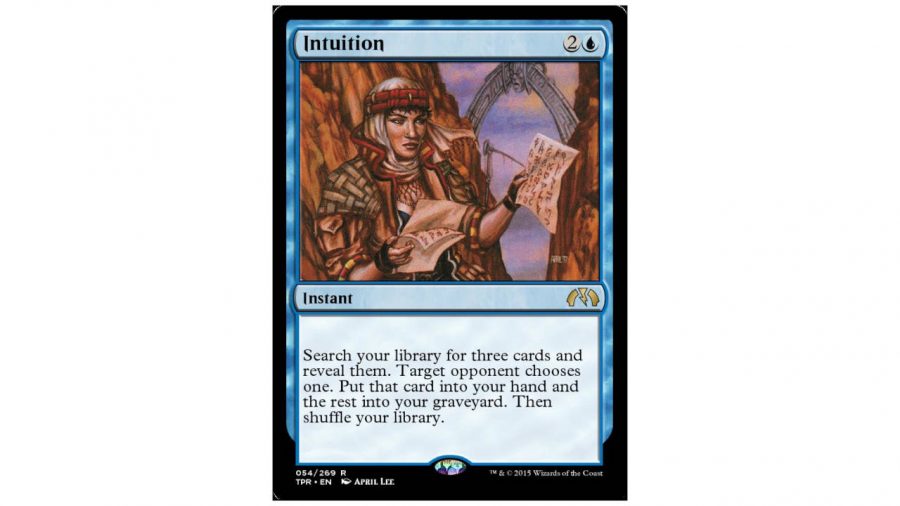 The only Instant in this list, Intuition’s ability is a little more peculiar than the other cards here. You’ll pick three cards from your deck, and let your opponent choose one to put into your hand, while the remaining two are discarded. Not obviously game-breaking, it requires a little more nuance to play effectively, as you wait for the right time to hand yourself an advantage at your opponent’s discretion.

Released in 1997’s Tempest set, copies of Intuition can fetch around $100, the lower end of the rarity spectrum. But Intuition is one of those cards that an old MTG collector might well find is still kicking around their house somewhere. Unsurprisingly, Intuition doesn’t owe its high price to an incredible ability, but rather to its spot on the Reserved List, which has been quietly bumping the card’s price upward for years.